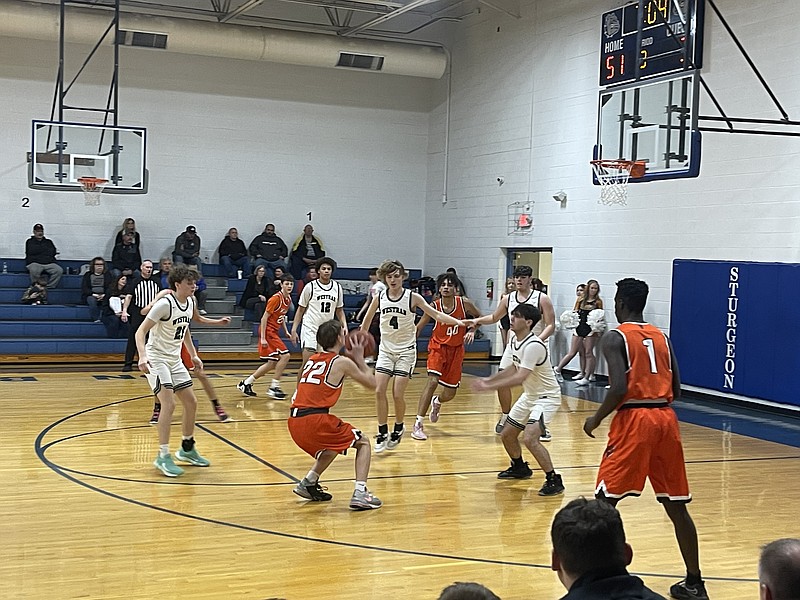 Since that was the case, No. 8 seed New Bloomfield fell handily, 67-17, against Class 2 No. 9, No. 1 seed Westran in the opening round of the 39th Annual Sturgeon Tournament Tuesday evening at Sturgeon Middle School.

Westran went on a 19-0 run to start the game, which was already enough to beat the Wildcats. New Bloomfield turned the ball over on nine of its 11 possessions during that run.

That theme continued throughout the contest, as the Wildcats had 28 turnovers.

Not only that, New Bloomfield struggled to make shots, only putting up three points in the first half. Nathan Fuhriman's top-of-the-arc 3 scored the Wildcats' only points of the half.

"They're huge," New Bloomfield coach Zach Buscher said. "We're 14-year-old kids, young team playing some grown men. It's always gonna be hard to do that. But yeah, they jumped on us early. We turned it over, looked a little scared, but didn't handle the press very well. Things like that are always gonna get to you."

Langden Kitchen led Westran offensively in the first half, registering all 21 of his points in the game during the half, including 13 in the first quarter. Showcasing New Bloomfield's struggles defensively, Kitchen had three two-handed dunks and two putbacks in the first half.

"The dude's monster," Buscher said. "He's good. He's awesome. We knew it. I think he's averaging like 24 (points) and 16 (rebounds). He's a load. We don't have an answer for him. We tried to make it hard on him. He made it look pretty easy, anyway. Yeah, he's an impressive player. Impressive kid."

Kitchen's and the rest of the Hornets' starters' first-half offense was all they needed, as Westran kept its starting five on the bench for the majority of the second half.

The Wildcats did most of their scoring in the second half, notching 14 points. Wyatt Jordan guided New Bloomfield offensively with five points, including a top-of-the-arc 3.

"He's our glue kid," Buscher said. "He didn't play hard, started out the year slow. Could be a little timid, we could tell. But as it's gone on here, he's starting to get a little confidence. And it starts to show when he's playing well."

Jordan nearly had seven points after collecting a defensive board and attempting a layup in transition. However, he missed the shot, and Hunter Dawson scored a putback for the Wildcats.

Dawson's putback was New Bloomfield's final scoring play in a game the Wildcats will want to forget.

For the sixth time this season, New Bloomfield lost a game by at least 50 points, with their 103-31 loss versus Russellville in the South Callaway Tournament their most significant margin of defeat.

The result meant New Bloomfield remain without a win on the season (0-18), while Westran jump to 16-3.

"They're a big, tough team," Buscher said. "Experienced, disciplined defensively. Got a few guys who can score. We'll just have to compete to the best of our ability like I always ask."