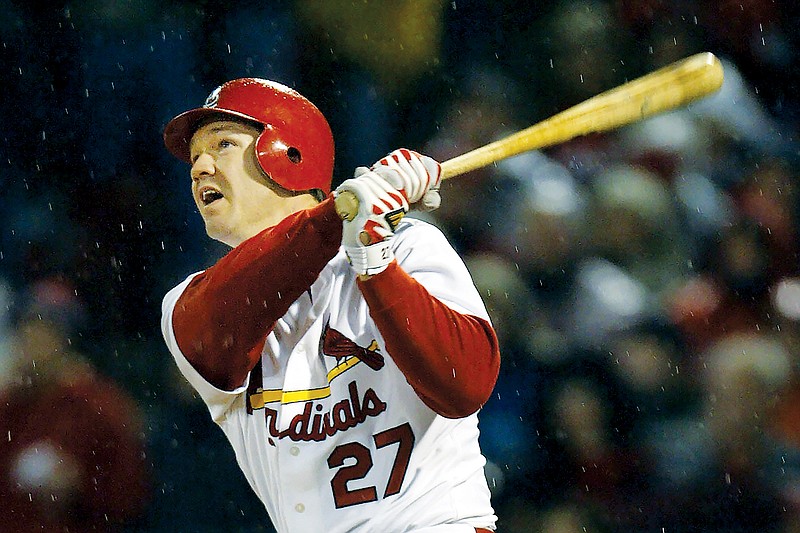 In this Oct. 14, 2004, file photo, Scott Rolen watches his two-run home run for the Cardinals during Game 2 of the NLCS against the Astros at Busch Stadium in St. Louis. (Associated Press)

NEW YORK -- Scott Rolen sat with his son in the parking lot outside Indiana’s Bloomington South High School in 2018, waiting to coach grade schoolers in basketball and listening on the radio for results of his first appearance on baseball’s Hall of Fame ballot.

Rolen received 10.2 percent of the vote, double the 5 percent minimum to remain on the ballot the following year but far short of the 75 percent needed for election.

Rolen came a long way in a few short years and was elected to the Hall on his sixth try Tuesday, the slick-fielding third baseman achieving baseball’s highest honor with five votes to spare.

A seven-time All-Star and eight-time Gold Glove winner, Rolen was picked on 297-of-389 ballots cast by the Baseball Writers’ Association of America for 76.3 percent. That made his modest 10.2 percent debut the lowest first-ballot percentage of a player later elected; the previous mark had been 17 percent in 1970 by Duke Snider, who was voted in with 86.5 percent in 1980.

First baseman Todd Helton was second with 281 votes (72.2 percent) and reliever Billy Wagner third with 265 (68.1 percent). Helton moved up from 52 percent and can have five more appearances on the ballot, while Wagner rose from 51 percent and has two additional chances.

“My phone would blow up about every day from my son and my buddies and everybody telling me where it was,” Rolen said.

He waited Tuesday at home in Bloomington -- he was runner-up for Indiana’s Mr. Basketball in 1993 -- with his parents, wife, son, daughter, brother and his brother’s family.

“When the phone call came and I saw baseball Hall of Fame on my phone,” Rolen said, “you kind of look around, like, that actually did just happen.”

They all cried, and a few minutes later Finn asked him to go out and toss a baseball.

“It’s 30 degrees here. It’s going to snow about 12 inches tomorrow, and my son and I were in the driveway playing catch,” Rolen said.

Then they walked a short distance to his brother’s house to celebrate.

“I promised everybody great steaks no matter what, and I had to turn the tongs over,” Rolen said. “I was normally going to grill for everybody but now my brother-in-law’s grilling.”

Rolen played shortstop, second base, third, right field, center, left and pitcher at Jasper High School before settling at third in his sophomore or junior year. He will be the 18th third baseman in the Hall, the fewest of any position.

“Most of the guys who moved to third probably came up as shortstops,” said Chipper Jones, the previous third baseman elected, in 2018. “You kind of outgrow the shortstop position as you get older and develop more.”

Rolen’s five-vote margin tied for the 12th-smallest among players elected by the writers and his vote percentage was the 10th lowest.

Eight blank ballots were submitted by writers, eligible to vote after 10 consecutive years of membership in the BBWAA.

Among 14 players appearing on the ballot for the first time, just two reached the 5 percent threshold to remain under consideration next year. Carlos Beltrán received 181 votes (46.5 percent), his total likely impacted by his role in the Houston Astros cheating scandal en route to the 2017 World Series title.

Rolen smiled widely on a Zoom call, speaking while wearing an “E5” cap, the out-of-character name of his foundation that assists children and families dealing with illness, hardship or special needs.

“A little tightness in the chest all day,” he said. “It was, wow, this is real.”