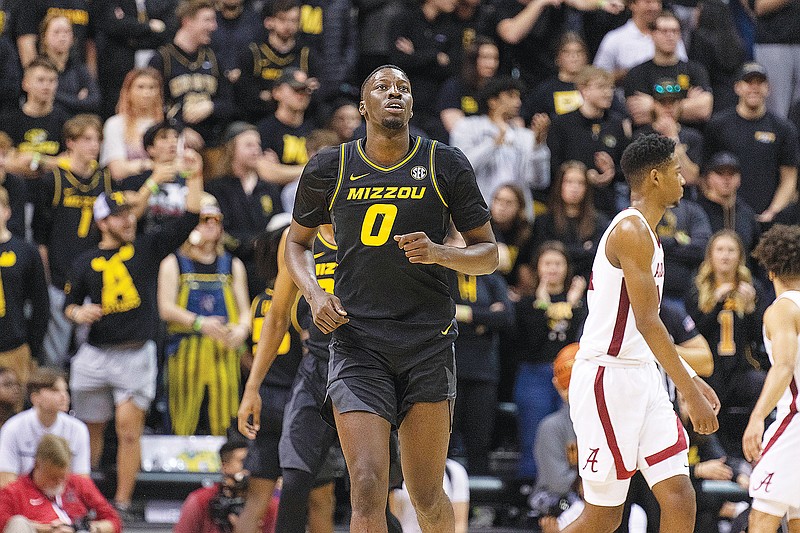 Missouri's Mohamed Diarra walks off the court during Saturday's game against Alabama at Mizzou Arena in Columbia. (Associated Press)

The Missouri Tigers men’s basketball team looks to climb back to .500 in Southeastern Conference play tonight when the Tigers take on the Mississippi Rebels in Oxford, Miss.

Missouri (14-5 overall, 3-4 SEC), which is receiving votes in both national polls, is coming off an 85-64 loss Saturday to now second-ranked Alabama at Mizzou Arena. It was the third loss in the last four SEC games for the Tigers.

Missouri is second in the conference in scoring at 83.1 points per game. The Tigers are giving up 75.9 points per contest.

Matthew Murrell, a 6-foot-4 junior guard, is the lone Rebel to average in double figures this season, totaling 14.9 points per game. Murrell, the only Mississippi player to start every game this season, also leads the team with 2.5 assists per contest.

Myles Burns, a transfer after earning NAIA All-America honors at Loyola New Orleans, can reach a career milestone tonight. Burns, a 6-6 forward, needs one steal to become just the sixth player in men’s college basketball history to reach 400 in his career.

Mississippi is 0-3 in conference games at home this season.

Missouri swept the three meetings between the two teams last season, including a 78-53 win at Mississippi. The Tigers defeated the Rebels 72-60 in the first round of the SEC Tournament.