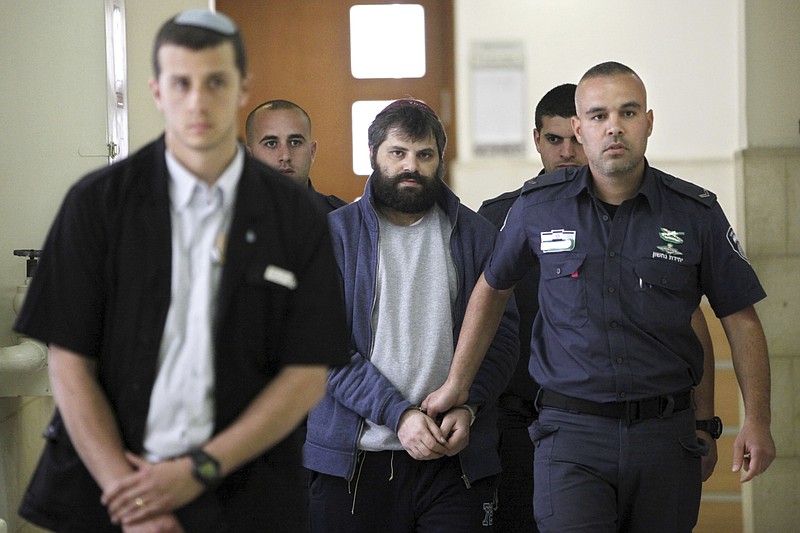 FILE - Yosef Haim Ben David, center, arrives at court in Jerusalem on March 22, 2016, during his murder trial in the death of a 16-year-old Palestinian boy. An Israeli group raising funds for Jewish radicals convicted in some of the country’s most notorious hate crimes, including Ben David, is collecting tax-exempt donations from Americans, according to an investigation by the AP and the Israeli investigative platform Shomrim. (AP Photo/Mahmoud Illean, File)

JERUSALEM (AP) -- An Israeli group raising funds for Jewish extremists convicted in some of the country's most notorious hate crimes is collecting tax-exempt donations from Americans, according to findings by The Associated Press and the Israeli investigative platform Shomrim.

The records in the case suggest that Israel's far right is gaining a new foothold in the United States.

The amount of money raised through a U.S. nonprofit is not known. But the AP and Shomrim have documented the money trail from New Jersey to imprisoned Israeli radicals who include Prime Minister Yitzhak Rabin's assassin and people convicted in deadly attacks on Palestinians.

This overseas fundraising arrangement has made it easier for the Israeli group, Shlom Asiraich, to collect money from Americans, who can make their contributions through the U.S. nonprofit with a credit card and claim a tax deduction.

Many Israeli causes, from hospitals to universities to charities, raise money through U.S.-based arms. But having the strategy adopted by a group assisting Jewish radicals raises legal and moral questions.

It also comes against the backdrop of a new, far-right government in Israel led by Prime Minister Benjamin Netanyahu, where ultranationalists and extremist lawmakers have gained unprecedented power.

According to Shlom Asiraich's promotional pamphlets, its beneficiaries include Yigal Amir, who assassinated Rabin in 1995; Amiram Ben-Uliel, convicted in the 2015 murder of a Palestinian baby and his parents in an arson attack; and Yosef Chaim Ben David, convicted of abducting and killing a 16-year-old Palestinian boy in Jerusalem in 2014. The group also assists an extremist ultra-Orthodox man who fatally stabbed a 16-year-old Israeli girl at Jerusalem's gay pride parade in 2015.

Shlom Asiraich, or "The Well-Being of Your Prisoners," has been raising money in Israel since at least 2018, and officially registered as a nonprofit in 2020 by a group mostly consisting of Israelis from hard-line settlements in the West Bank. At least five of the group's seven founders have themselves been questioned by Israeli authorities for crimes related to their activities against Palestinians. Some have been arrested and charged.

Recipients of its largesse have hailed the group for coming through in difficult times.

"You have no idea how much you help us," the family of Ben-Uliel, who is serving three life sentences, wrote in a hand-written letter posted to the group's Facebook page.

Being a relatively new organization, Shlom Asiraich's official filing to Israel's nonprofit registry provides little data and does not indicate how much money it has raised. But in its promotional flyers, recently broadcast by Israeli Channel 13 news, the organization indicated it has raised 150,000 shekels (about $43,000).

Israeli nonprofits have long sought funding abroad, with the U.S. a major source. According to figures published by Noga Zivan, a consultant for nonprofits in Israel, between 2018 to 2020 Jewish-American organizations alone donated $2 billion to Israel each year.

Israeli right-wing groups have long raised funds in the U.S. But Dvir Kariv, a former official in the department of Israel's domestic security agency Shin Bet that deals with Jewish violence, said it is unusual for extremist Jews such as the ones who run Shlom Asiraich to do so.

He said the group appears to have taken a cue from other far-right Israeli groups, particularly Kach, an anti-Arab racist group that was once banned as a terror organization in the U.S. but which Kariv said was adept at raising money there decades ago.

Itamar Ben-Gvir, a senior Cabinet minister in Israel's new far-right government, is a disciple of Kach's founder, Rabbi Meir Kahane, who was once barred from Israeli politics.

It is not clear when Shlom Asiraich began working with the New Jersey-based World of Tzedaka, a nonprofit that says it works "to enable any individual or organization to raise money for their specific cause."

Donors in the U.S. can enter the Shlom Asiraich site and click on a link that takes them to a donation page hosted by World of Tzedaka. They can also donate directly from World of Tzedaka's site.

According to an instructional video on the World of Tzedaka site, fundraisers must list a rabbi as a reference and receive approval from a Lakewood religious committee. World of Tzedaka charges $28 a month and a 3% processing fee for transferring funds to an Israeli bank account, the site says.

World of Tzedaka supports other charitable ventures, most of them focused on assisting Jewish families in distress, according to its website.

Ellen Aprill, an expert on tax and charities at Loyola Law School in Los Angeles, said convicted criminals and their families could be considered in need and qualify as a permissible charitable purpose.

While supporting someone convicted of acts of terrorism could be seen as encouraging criminal activity, that would need to be proven, she said.

Marcus Owens, a lawyer who ran the IRS's nonprofit unit in the 1990s, took a tougher stance.

"The U.S. Department of Justice views assistance to the families of terrorists as a form of material support for terrorism," he said.

In order to become a tax-exempt group recognized by the IRS, an organization must operate exclusively for charitable, religious or educational purposes.

Repeated attempts to reach representatives of Shlom Asiraich were unsuccessful. A person who answered the group's phone number hung up on an AP reporter. Moshe Orbach, whose address in the hard-line West Bank settlement of Yitzhar is listed as the group's headquarters, declined through a lawyer to be interviewed.

A World of Tzedaka representative hung up when asked for comment.

The IRS refused to answer questions about the group, saying "federal law prohibits the IRS from commenting."

The State Department on Tuesday referred questions to the Department of Justice. "We condemn extremist violence in all its forms," it said.

According to documents obtained by the AP, Shlom Asiraich was registered as a nonprofit with Israeli authorities by Chanamel Dorfman, an attorney and a top aide to Ben-Gvir, Israel's new national security minister.

Dorfman is also listed as the group's "lawyer/legal adviser" on Guidestar, the official nonprofit registry's site.

In a text message, Dorfman denied ever having been the group's legal adviser and did not respond to additional questions. Dorfman recently told the conservative daily Israel Hayom he was simply acting as a lawyer and that "if I knew that this is what this organization does, I wouldn't have registered it."

In October, on the eve of the Jewish New Year, Shlom Asiraich tweeted a photo of snacks it provided to Jewish suspects under house arrest, and to families of Israelis convicted or charged with crimes against Palestinians. A note accompanying the wine and other goods the nonprofit provided called the men "beloved heroes."

"Stay strong and remain loyal to the people of Israel and to the holy Torah and don't stop being happy!" the note read.

This article was published in partnership with Shomrim, The Center for Media and Democracy in Israel. AP correspondent Matthew Lee in Washington contributed to this report.

This story has been corrected to show the year of Rabin's assassination was 1995, not 2005. 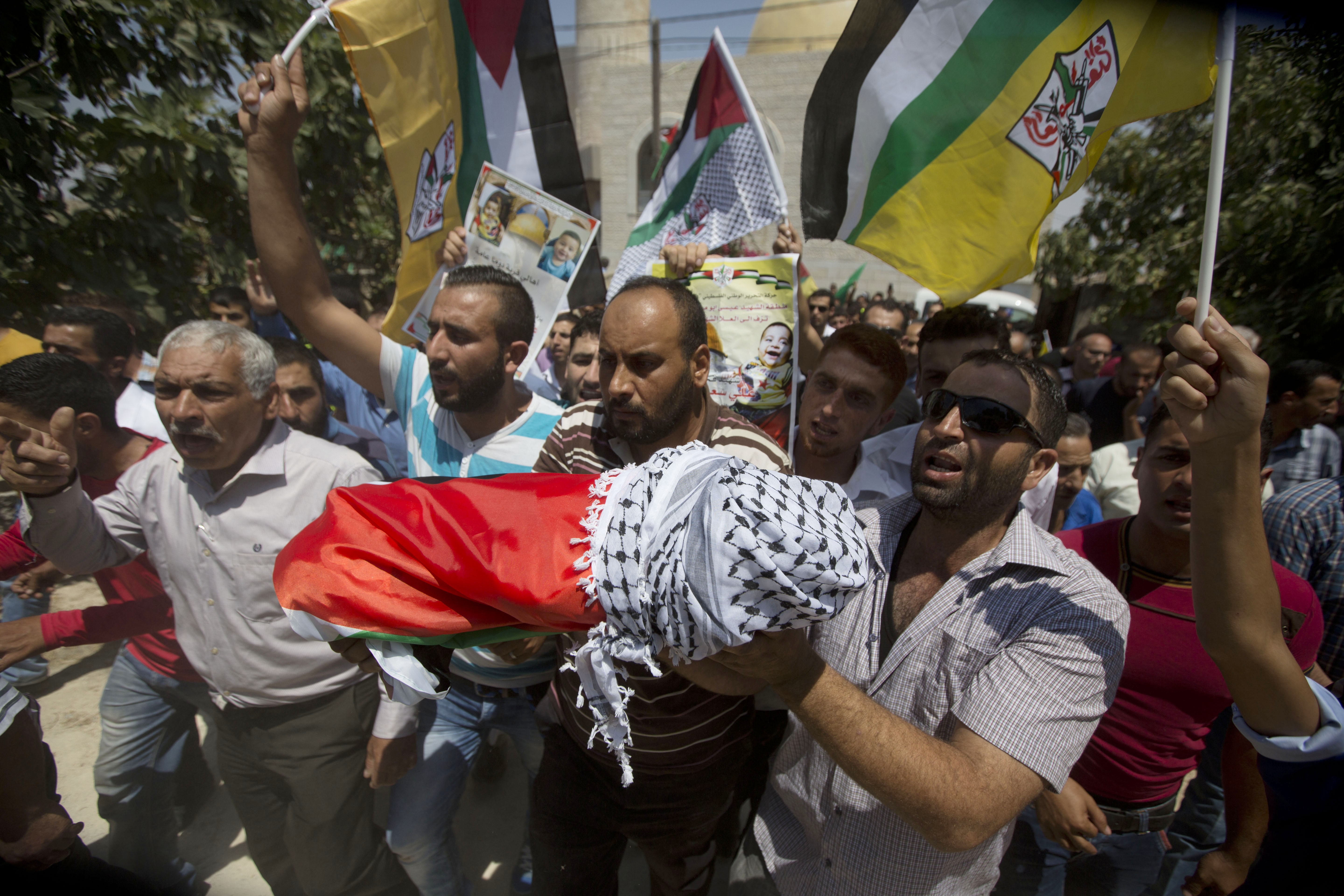 FILE - Palestinians carry the body of 18-month-old Ali Dawabsheh during his funeral in the West Bank village of Duma on July 31, 2015. The sleeping toddler was burned to death when Jewish assailants set fire to two Palestinian homes, an attack that also killed his parents and critically wounded his 4-year-old brother. An Israeli group raising funds for Jewish radicals convicted in some of the country’s most notorious hate crimes, including the Duma attack, is collecting tax-exempt donations from Americans, according to an investigation by the AP and the Israeli investigative platform Shomrim. (AP Photo/Mahmoud Illean, File) 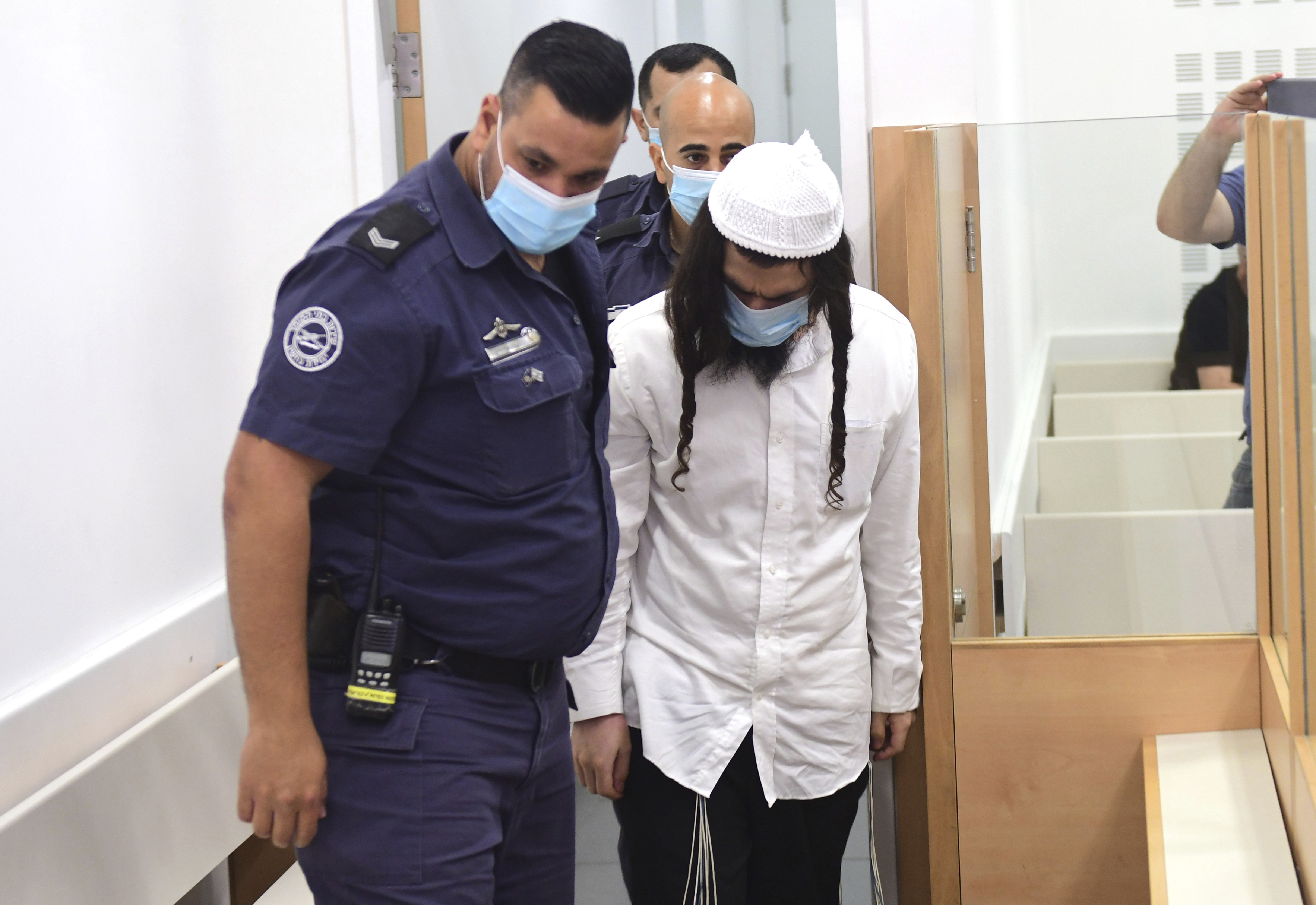 FILE - Israeli Jewish extremist Amiram Ben-Uliel arrives in court in Lod, Israel, on May 18, 2020, where he was convicted in a 2015 arson attack that killed a Palestinian toddler and his parents in the West Bank. An Israeli group raising funds for Jewish radicals convicted in some of the country’s most notorious hate crimes, including Ben-Uliel, is collecting tax-exempt donations from Americans, according to an investigation by the AP and the Israeli investigative platform Shomrim. (Avshalom Sassoni/Pool Photo via AP, File)