Alex Murdaugh goes on trial in 2021 killings of wife, son 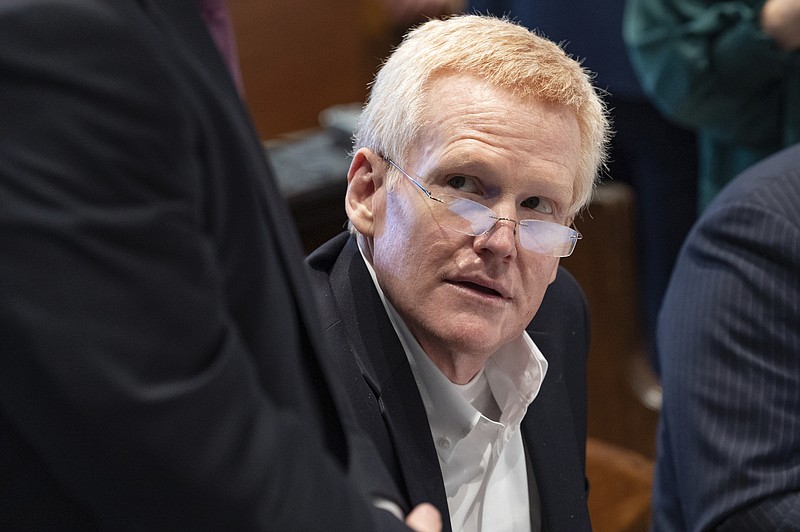 Defendant Alex Murdaugh prepares for jury selection to resume during his murder trial at the Colleton County Courthouse in Walterboro, S.C. on Monday, Jan. 23, 2023.( Joshua Boucher/The State via AP, Pool)

WALTERBORO, S.C. (AP) -- As his life unraveled over the past two years, disgraced South Carolina attorney Alex Murdaugh didn't fight giving up his law license and admitted plenty of mistakes tied to missing client money and a financial mess that led to 100 criminal charges.

But he has adamantly insisted, from the moment he found the bodies of his wife and youngest son shot multiple times at the family's estate in June 2021, that he was not the killer. Soon, it will be up to 12 jurors to decide if they agree.

Jury selection began Monday morning as prosecutors and defense attorneys sifted through some 700 summons to find 12 jurors and six alternates. More than 200 people were brought in for a first round of questioning that lasted nearly three hours, but only about 30 were qualified for the pool of potential jurors.

Potential jurors faced a battery of questions, including whether they knew any of the nearly 200 law officers, friends, bankers and others on the witness list as well as whether they had heard about and followed the case.

Two other panels were screened Monday and lawyers said they hope to have a jury picked by either late Tuesday or early Wednesday.

State agents investigated for 13 months before charging Murdaugh with two counts of murder in July, and a judge has set aside three weeks for the trial. Murdaugh, who has been in jail on financial crimes charges since October 2021, insisted on the trial as soon as possible.

Prosecutors are not seeking the death penalty but said they will ask for life without parole if Murdaugh is convicted of murder. The minimum sentence is 30 years.

Here's an overview of the trial and the scene surrounding it as hundreds of lawyers and their support staff, reporters and true crime enthusiasts are expected to swell Colleton County's population of 38,000 in the rural, southern part of the state.

THE KILLINGS AND EVIDENCE

Murdaugh, 54, told police he found Maggie, 52, and their son, Paul, 22, dead outside their Colleton County home on June 7, 2021. He said he'd been gone for an hour to visit his ailing father and mother.

Authorities released little information about the killings beyond saying that Maggie Murdaugh was killed with a rifle and Paul Murdaugh with a shotgun.

Prosecutors have not detailed direct evidence linking Murdaugh to the deaths. So far, they have filed no confession or witness statements about the killings with the court and there is no evidence that either gun has been found.

Video from Paul Murdaugh's phone timestamped not long before the killings shows the three talking without indication of anger. Alex Murdaugh's lawyers said he has never denied being at his home.

There is DNA from the victims on Alex Murdaugh's shirt, but his defense said that came from checking for signs of life when he found their bodies.

The defense and prosecution are fighting over whether to allow an expert to testify that the blood splattered onto Murdaugh's shirt when his son was shot. Defense lawyers contend the expert testing the shirt is lying and destroyed it before the defense could conduct its own tests.

Prosecutors are expected to rely heavily on evidence of Murdaugh's financial problems, which they said led him to kill to garner sympathy and buy time as he covered up his theft of clients' settlement money and other crimes.

Murdaugh's attorneys contend it is absurd to say Murdaugh would have thought his wife and son dying violently would reduce scrutiny into his finances.

The murder charges are only two of about 100 criminal counts Murdaugh faces. He also is on trial on two counts of possession of a weapon during a violent crime.

Still hanging over his head are a broad range of dozens of state charges. They include stealing millions of dollars from clients, diverting a wrongful death settlement from the family of his longtime maid to himself, running a drug and money laundering ring, evading taxes and committing fraud from what police said was an attempt to have someone kill him so his surviving son could collect a $10 million life insurance policy.

Murdaugh also faces a number of civil suits from former clients and a 2019 boat crash that killed a teen. Police said Paul Murdaugh was driving the boat while grossly intoxicated and he faced criminal charges when the teen died. The family of the teen was aggressively trying to get information about Murdaugh family finances at the time of the 2021 killings.

The Murdaugh name is well-known in judicial circles in the South Carolina Lowcountry. Alex Murdaugh worked for the family law firm that had been in business in tiny neighboring Hampton County for a century, winning a number of multimillion-dollar settlements for fatal accidents and workplace injuries.

Murdaugh's father, grandfather and great-grandfather were the elected prosecutors for 87 years straight in Colleton, Hampton and three other counties.

Typically, a portrait of Murdaugh's father hangs in the Colleton County Courthouse. Judge Clifton Newman ruled that it be removed for his son's trial.

Murdaugh's downfall has attracted media from around the world and dozens of true crime podcasts and other coverage. It's probably the most sensational trial in South Carolina since Susan Smith was convicted of killing her children and sentenced to life in 1995 in tiny Union County.

The Murdaugh trial is taking place at the historic Colleton County Courthouse in Walterboro, where the large, old Southern courtroom can seat nearly 250 people, or about 5% of Walterboro's population of 5,500.

Walterboro calls itself "The Front Porch of the Lowcountry" as a gateway to South Carolina's popular beaches. It sits along busy Interstate 95 with a drag of fast food restaurants and a smattering of chain hotels along its two highway exits.

The city has asked food trucks to help downtown restaurants handle lunchtime crowds and residents have offered their homes or businesses to media outlets to use as a base to cover the trial. 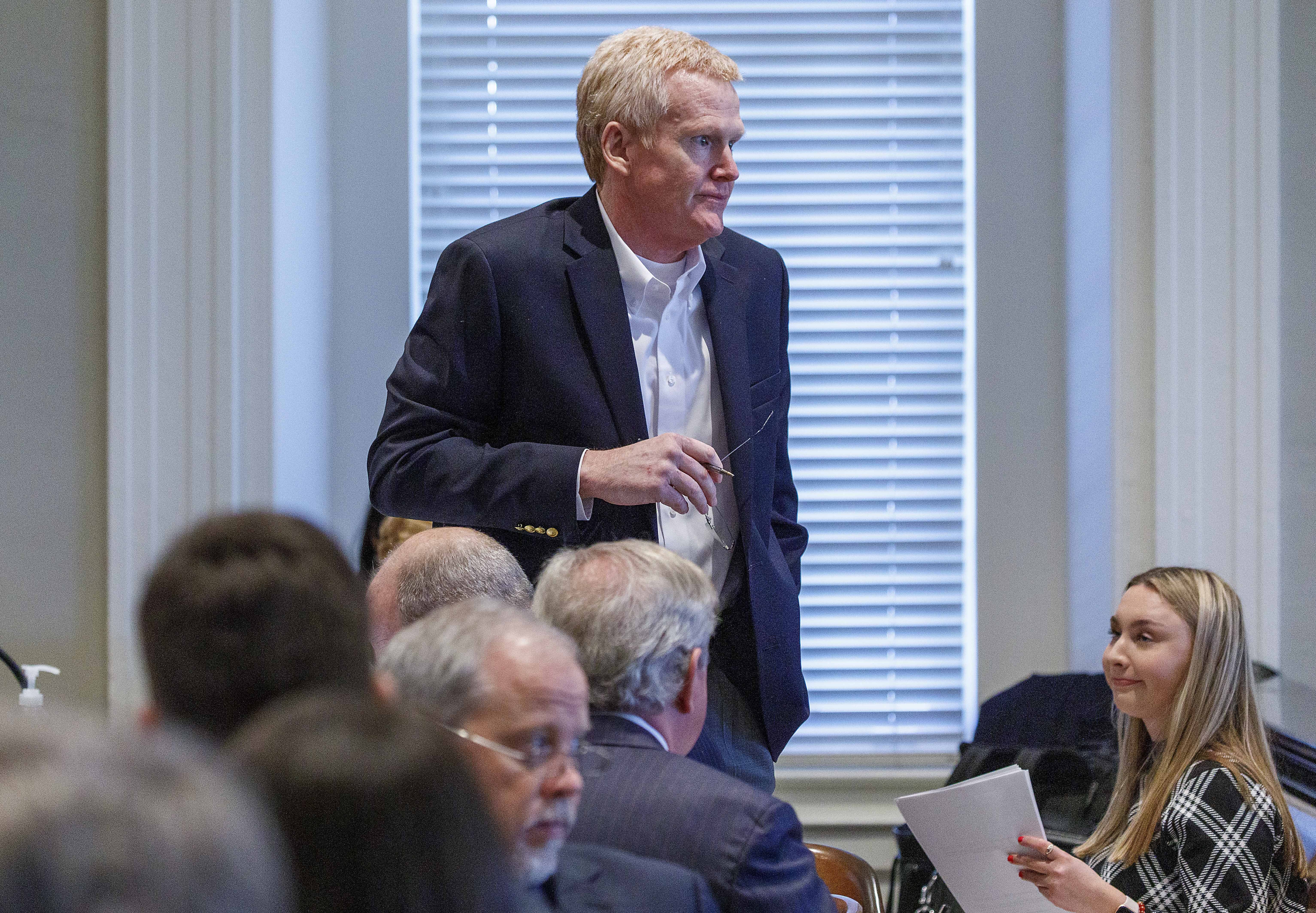 Alex Murdaugh stands to be recognized for the jury the first day of jury selection as his murder trial begins at the Colleton County Courthouse in Walterboro, S.C. Monday, Jan. 23, 2023. (Grace Beahm Alford/The Post and Courier via AP, Pool) 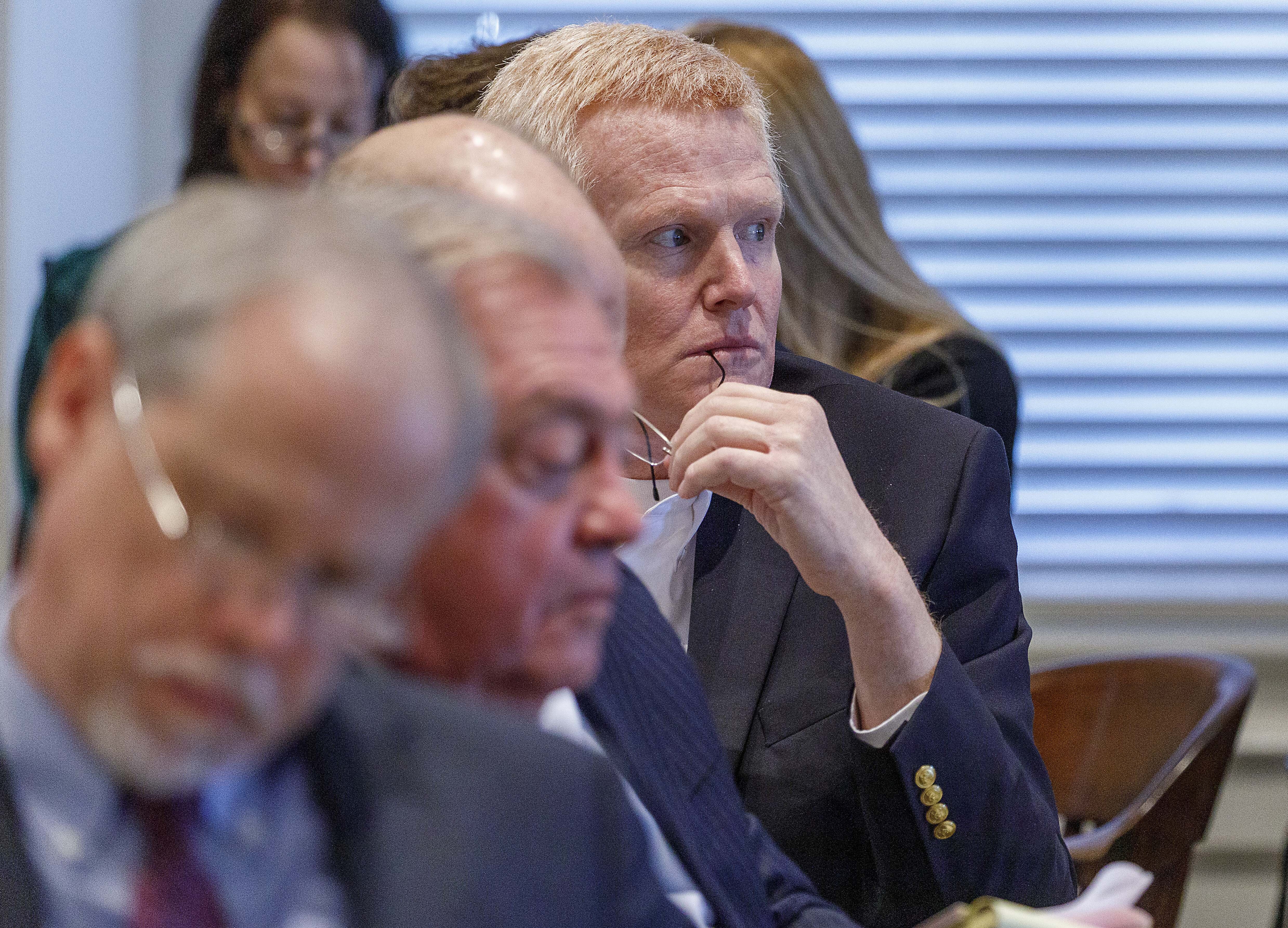 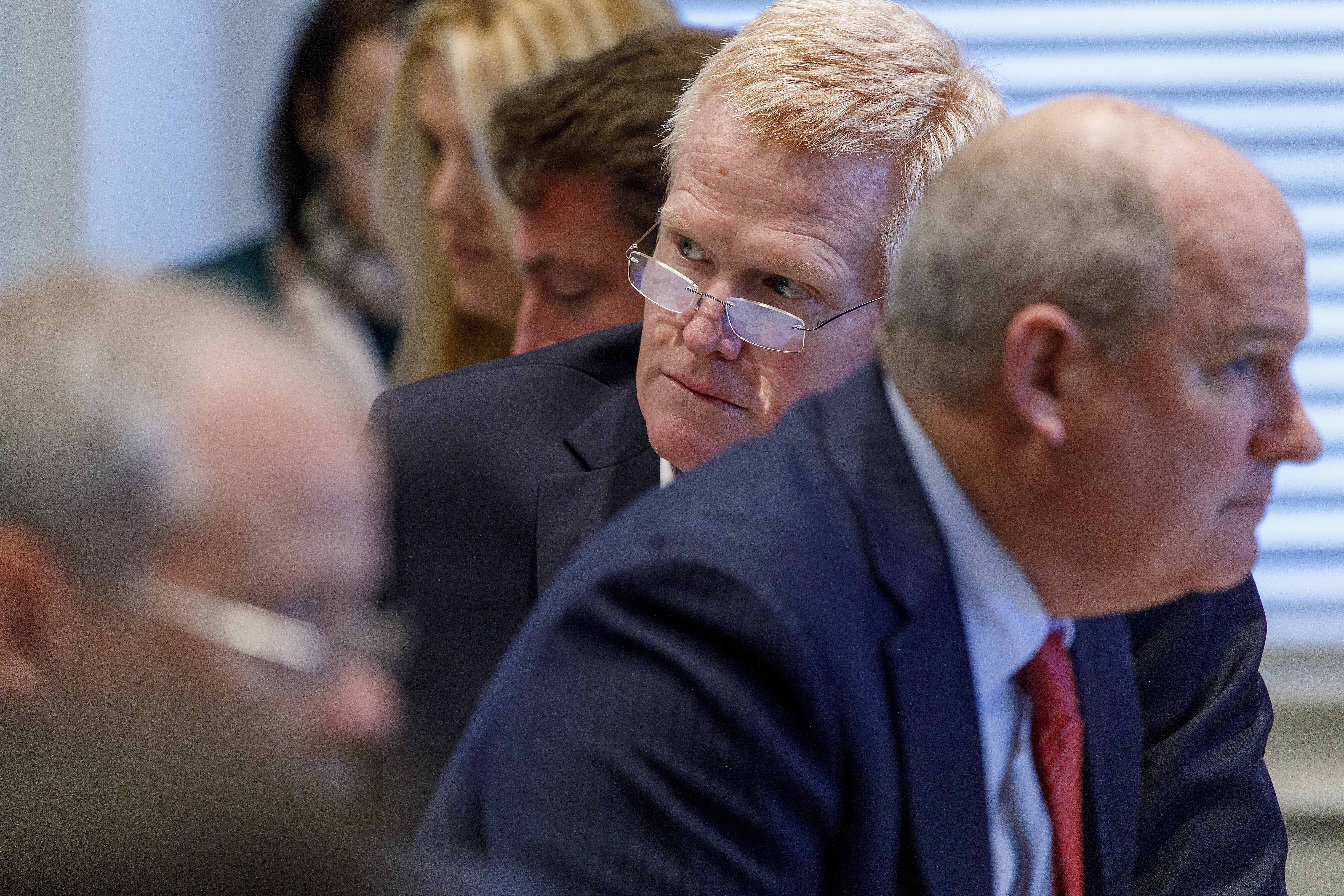 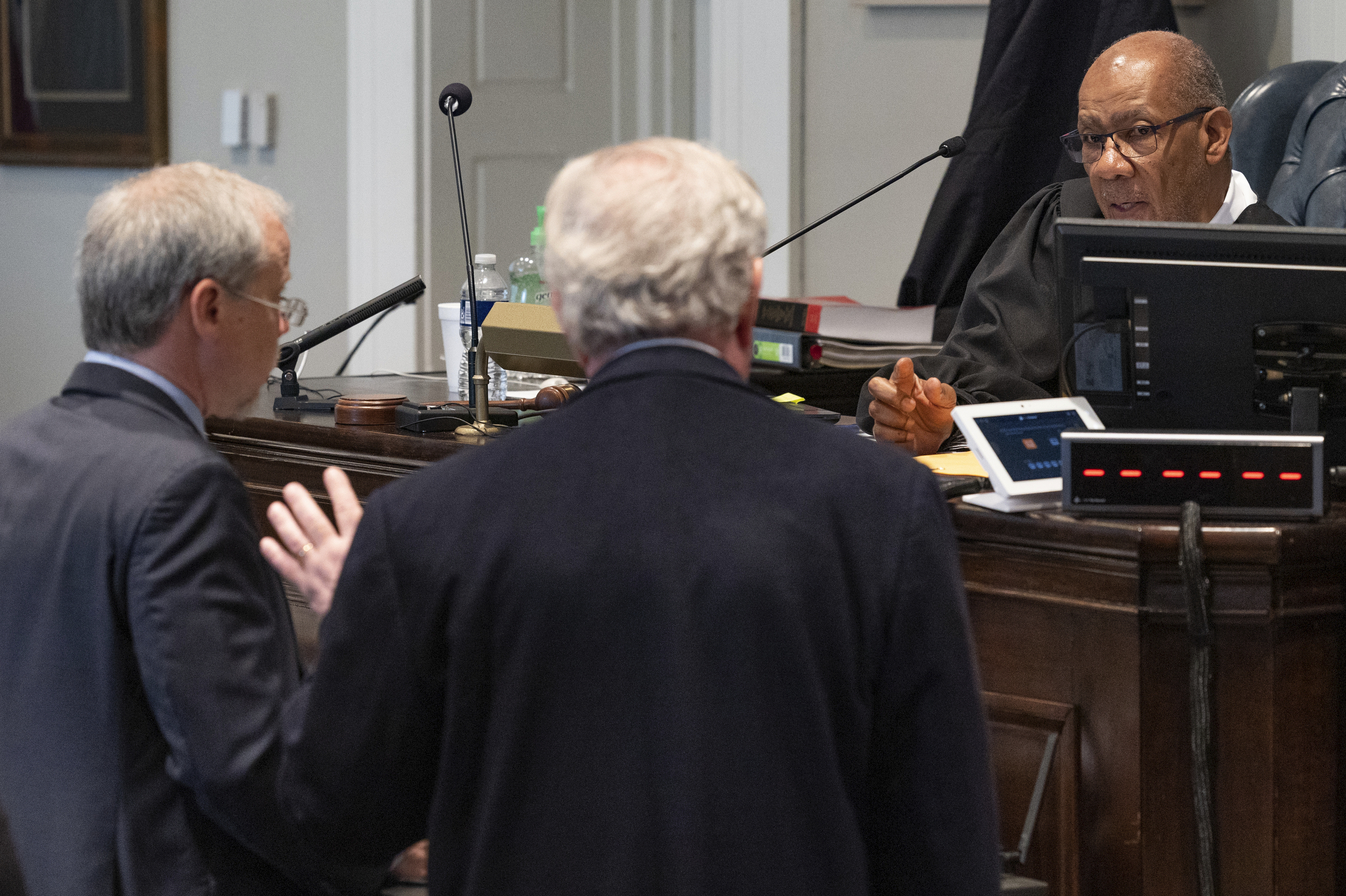 Creighton Waters for the state and Dick Harpootlian for the defense speak with Judge Clifton Newman as jury selection begins the in Alex Murdaugh murder trial at the Colleton County Courthouse in Walterboro, S.C. on Monday, Jan. 23, 2023.( Joshua Boucher/The State via AP, Pool) 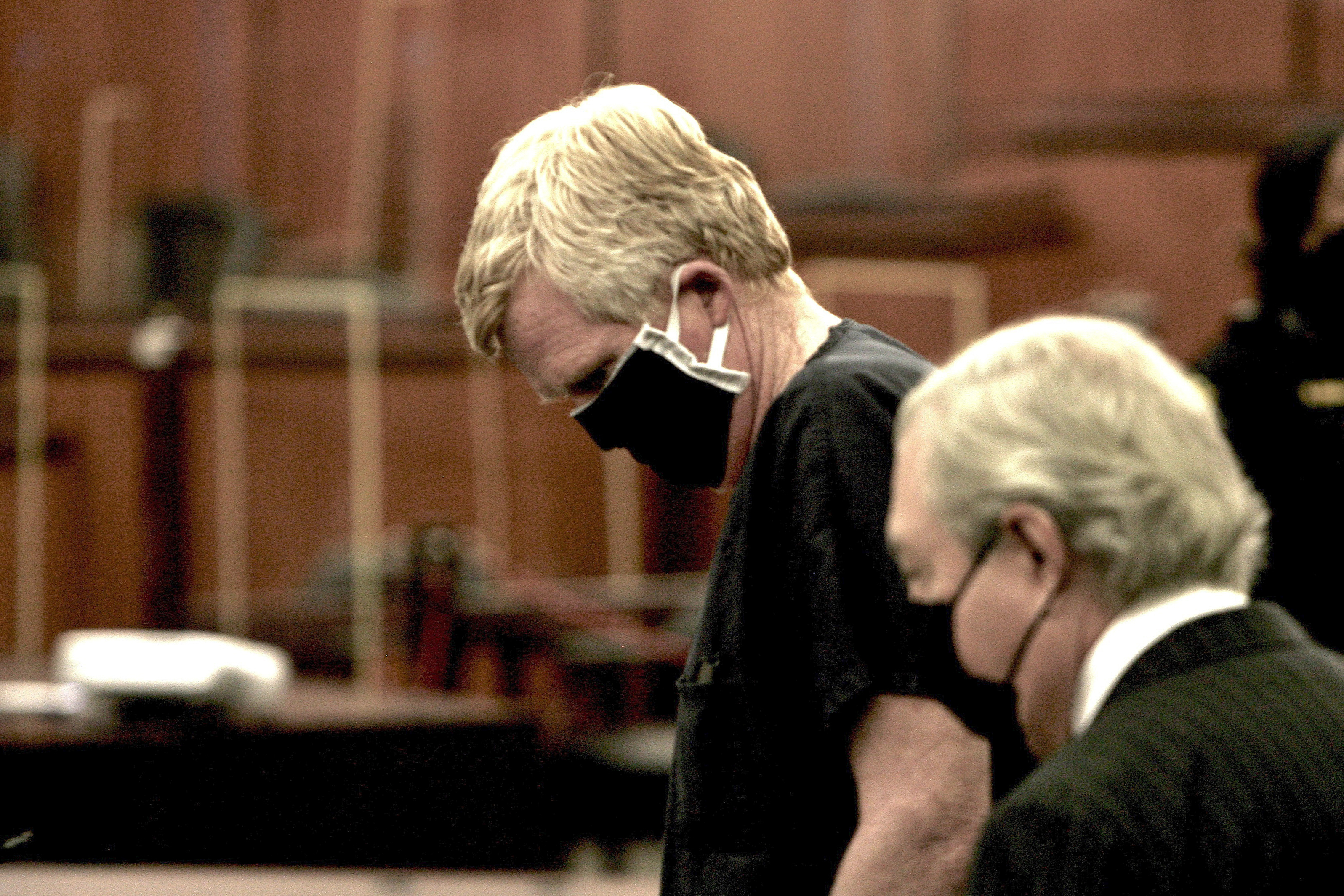 FILE - Alex Murdaugh awaits the beginning of his bond hearing in the Richland Judicial Center in Columbia, S.C., on Oct. 19, 2021. Murdaugh's trial on two counts of murder in the June 2021 deaths of his wife and son is scheduled to start Monday, Jan. 23, 2023. (AP Photo/Lewis M. Levine, Pool, File) 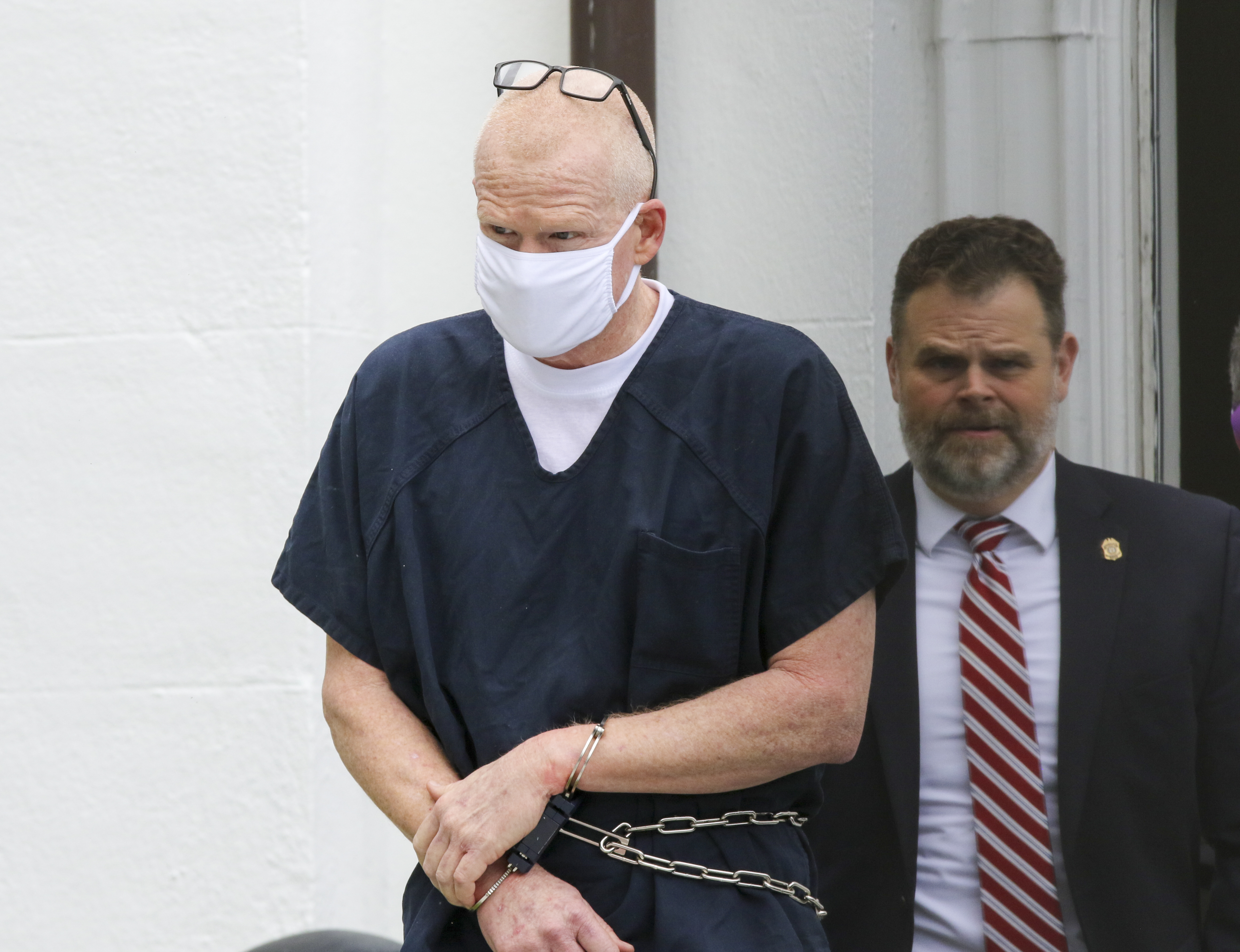 FILE - Alex Murdaugh is escorted out of the Colleton County Courthouse in Walterboro, S.C., on July 20, 2022. Murdaugh's trial on two counts of murder in the June 2021 deaths of his wife and son is scheduled to start Monday, Jan. 23, 2023. (Tracy Glantz/The State via AP, File) 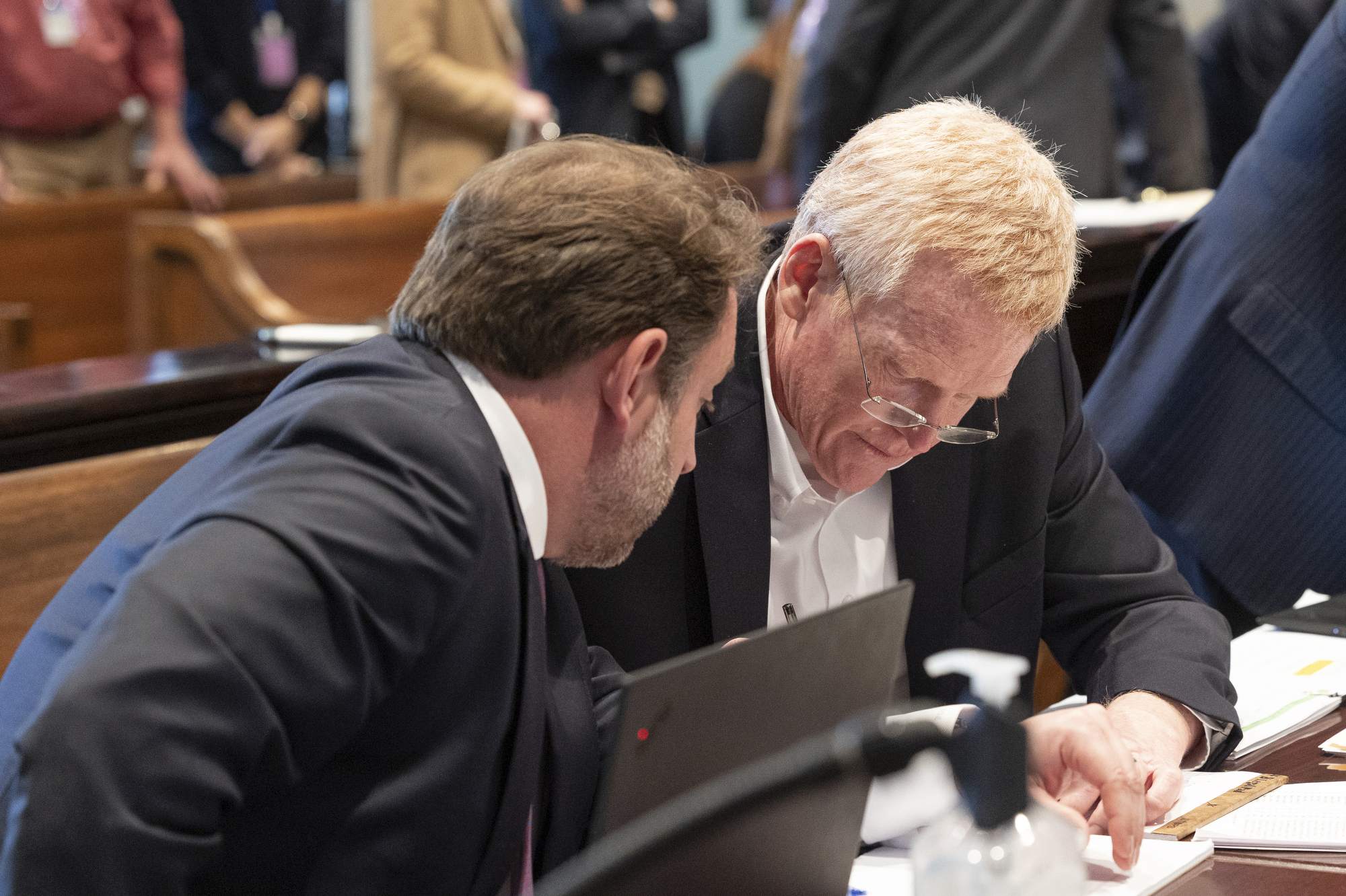 Defendant Alex Murdaugh prepares for jury selection to resume during his murder trial at the Colleton County Courthouse in Walterboro, S.C. on Monday, Jan. 23, 2023.( Joshua Boucher/The State via AP, Pool) 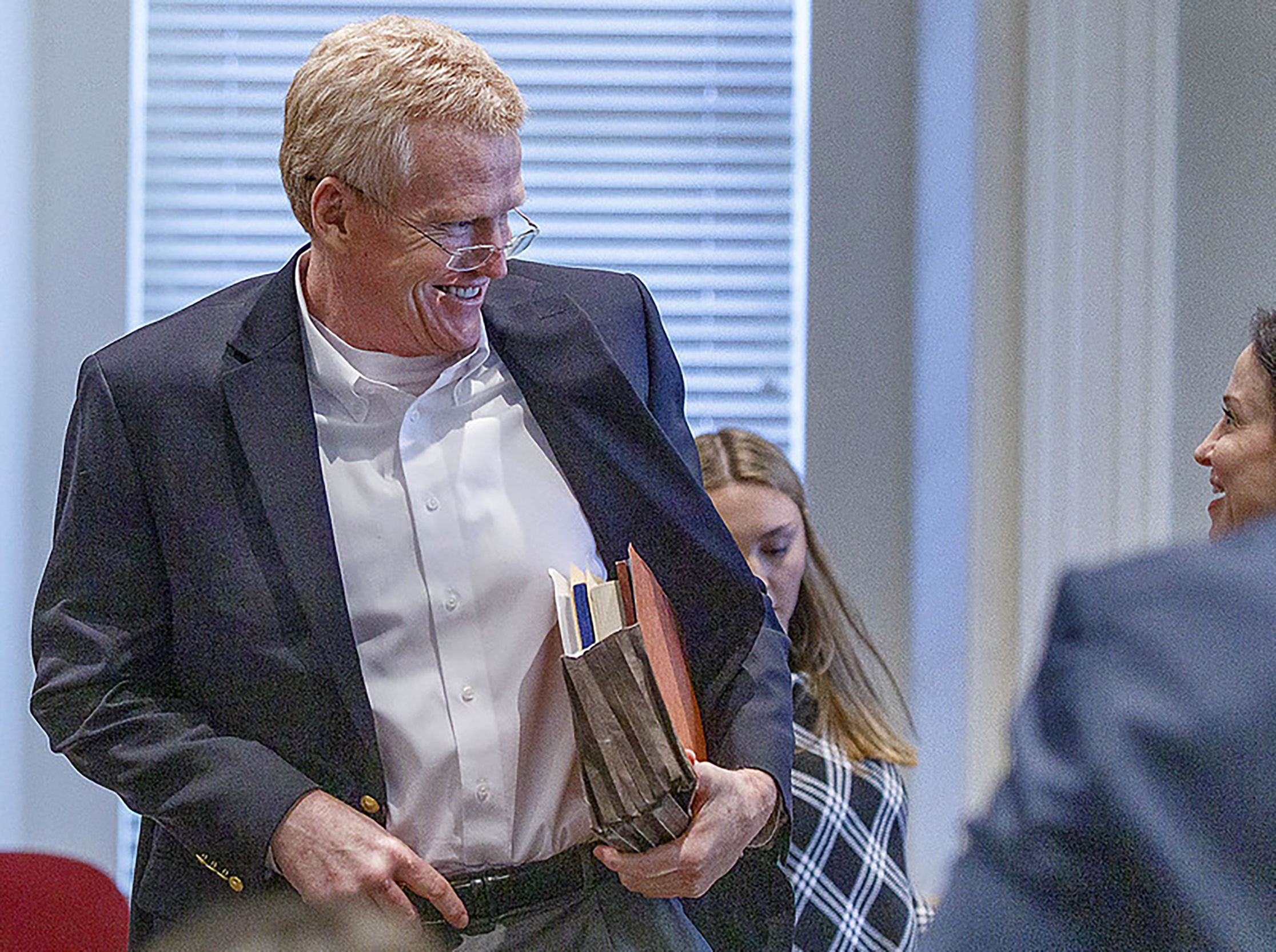