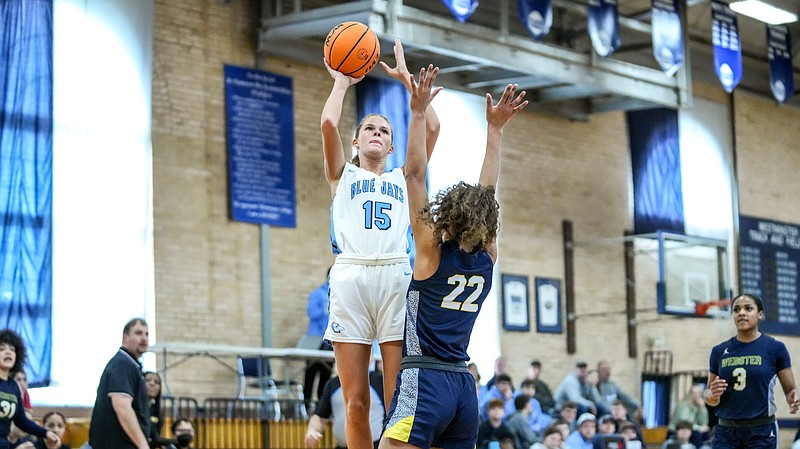 The Westminster College women's basketball team traveled to Louisville, Kentucky, to take on the Spalding University Golden Eagles. Spalding went on a 7-0 run in the final two minutes to make it 66-63 and shot a 3 to tie with 13 seconds remaining. The Blue Jays grabbed the rebound, got fouled and hit free throws. They made one free throw to make it a four-point game. The Golden Eagles got another look from 3, but it didn't fall. Westminster walked away victorious, 67-63. The Blue Jays have now won two games in a row and improved to 4-2 in the St. Louis Intercollegiate Athletic Conference and 10-7 overall. The Golden Eagles fall to 1-5 in the SLIAC and 4-13 overall.

Westminster looked to run away with it early, going up 26-8 after the first quarter. However, Spalding crawled back into it, cutting the lead to 13 points, and headed to the locker rooms at halftime with the score 40-27.

The two teams traded multiple baskets to start the second half, with the Blue Jays keeping their lead over 10 points. Spalding scored seven unanswered points in the early portions of the fourth quarter to make it 62-56 with 5:30 left in the game. The Blue Jays responded and got their lead back up to 10 points. However, the Blue Jays hit a dry spell on offense, not scoring in the final four minutes from the field. That opened the door for the Golden Eagles to go on a 7-0 run and cut the Blue Jay's lead to three points. Spalding nearly tied it with 13 seconds left in the game, but it hit off the rim, and the Blue Jays grabbed the rebound. The Golden Eagles fouled to extend the game and sent Annette Ramirez to the free-throw line to shoot two. She made one and put the game away. The Blue Jays won it 67-63.

Ramirez led the Blue Jays' offense with 19 points and eight rebounds. She went 7-10 from the free-throw line. Natalie Archambault had 12 points and went 6-for-9 from the field. Shelby Kurtz was the third Blue Jay to score in double figures with 11 points in the game.

The Blue Jays will be back in action Wednesday when they travel to St. Louis to take on Fontbonne University. That game will tip off at 5:30 p.m.