Scoring woes continue for Missouri in loss to Alabama 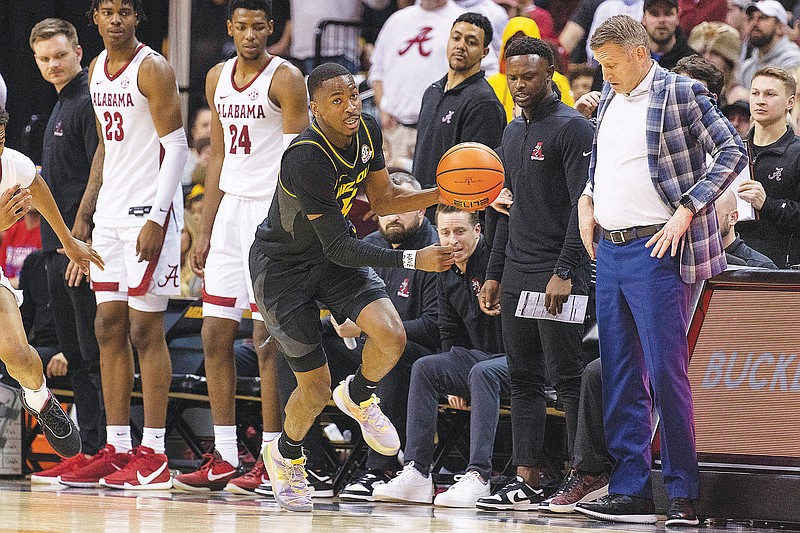 D’Moi Hodge of Missouri brings the ball up court as Alabama head coach Nate Oats watches his feet during the second half of Saturday’s game at Mizzou Arena in Columbia. (Associated Press)

COLUMBIA -- The Missouri Tigers’ magic number has been 70.

Missouri has won its past 17 games when scoring at least 70 points, but for the third time in the past four games, the Tigers were held to a season-low 64. The No. 4 Alabama Crimson Tide beat the Tigers 85-64, continuing the Tide’s undefeated start in Southeastern Conference play Saturday at Mizzou Arena.

“No. 1 team in the country, Alabama, I’ve said it all along,” Missouri coach Dennis Gates said. “They have the length, they have the athleticism, they have the shooting ability, which I thought we stifled in the first half because they rely on it, but also they do a great job getting to the free-throw line.”

The team that was once the top scoring offense from a major conference early in the season has averaged just 73.29 points per game in conference play.

Missouri was without leading scorer and rebounder Kobe Brown, who Gates made what he called an “executive decision” to sit with an ankle injury after pre-game warmups.

Without Brown in the lineup, freshman Aidan Shaw made his first career start, garnering three rebounds and two points in 17:20 played.

“Regardless of Kobe playing or not, I put Aidan Shaw as a starter,” Gates said. “He was going to start regardless, he did a great job throughout this week and I thought he was ready to start his first game.”

Missouri’s adjusted lineup stayed close to Alabama early. The Tide jumped ahead 9-2 to start, but after a Missouri timeout, Isiaih Mosley began to show why he was one of the top scorers in college basketball last season.

With most of the Tigers’ first shots being fadeaways to try to work around the height of Alabama’s defense, Mosley charged into the lane for consecutive floaters to cut Alabama’s lead to 9-6.

The Tide extended back to an 11-6 lead, but DeAndre Gholston hit his first jumper of the day, to begin a 10-point performance, before Mosley hit a step-back jumper from just in front of the 3-point arc to cut the lead to 11-10 with 12:04 left in the opening half.

An Alabama jumper and two Gholston free throws later, Mosley helped give Missouri its first lead when he crossed over his defender to create space, then threw up a lob to Shaw who had worked his way behind the Crimson Tide defense for a reverse dunk, slamming the Tigers to a 14-13 lead.

Mosley connected on another floater to put Missouri up 16-13 with 9:30 left in the first half, it would be the Tigers’ biggest lead.

“The tendency of Alabama is this, you can see it when you look at their scoring margins, they go on a run at the end of the first and beginning of the second,” Gates said. “Consistently. That is consistently how they have played. We didn’t mitigate it at all.”

Missouri never got closer than 13 the rest of the way.

Alabama held a 20-point lead with 9:45 left, but a Gholston 3, a Mosley jumper and a Sean East layup got the Tigers within 63-50, but the Tide extended back to an 18-point lead quickly and built as far as 21 with 23 seconds left.

Mosley punctuated his 19-point performance with another jumper with 5:34 left to complement four rebounds.

Gholston added five rebounds to his 10-point performance, while Mohamed Diarra followed up a career-game Wednesday with another career-game Saturday, totaling career-highs of eight points and 12 rebounds, with seven of those coming on the offensive end.

“(Diarra) is finally getting a rhythm,” Gates said. “… For him to come out and have 12 rebounds, I thought that was a highlight.”

Missouri was once again outrebounded, but by a significantly smaller margin with Alabama taking a 53-45 advantage.

Alabama (17-2, 7-0) will look to stay undefeated in conference play when it hosts Mississippi State at 8 p.m. Wednesday.