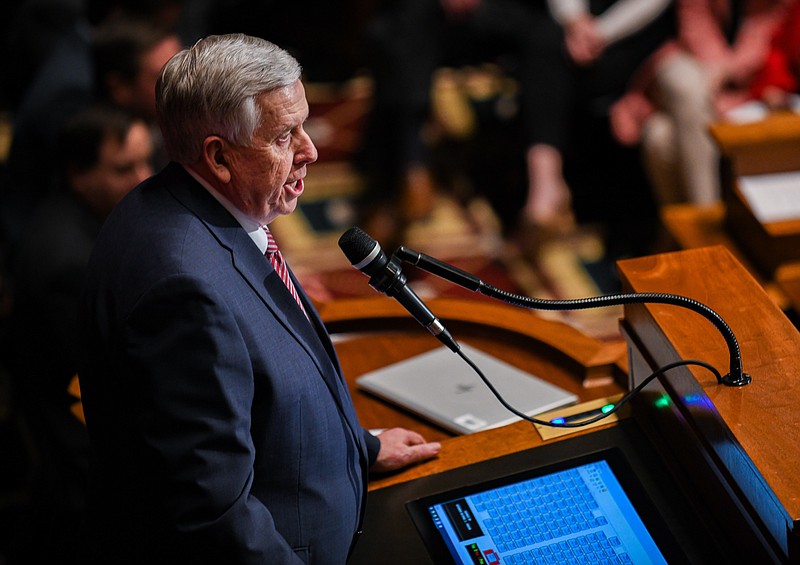 Julie Smith/News Tribune photo: Missouri Gov. Mike Parson is shown at the speaker's podium as he delivers the annual State of the State speech in the House of Representatives Chamber. The speech was paused numerous times as members of the joint session of legislators stood to applaud.

The Republican governor unveiled $50 billion in budget proposals during the State of the State address on Wednesday afternoon, including a 7 percent increase in core funding to colleges and universities, a boost in funding for state scholarships and workforce training programs, and foundational funding for child care to help parents return to work.

"These children are the future. The future of our state, our nation and our democracy," Parson said after introducing Missouri schoolchildren to share their professional and educational dreams. "If we fail them, then the failures of tomorrow are the failures of today."

Parson proposed a $70.8 million increase to the core funding going to public colleges and universities -- a 7 percent increase that builds on a couple years of funding gains. Under the proposal, Lincoln University would get an additional $2 million and State Technical College of Missouri, in Linn, would receive an additional $592,481.

Parson's proposed 7 percent increase is the largest in 25 years, he said.

In addition to increases to core funding, the state funded up to $20 million in transformational projects at each of the universities last year and fully funded Lincoln's land grant match for the first time at $9.7 million. The land grant funding is used to match and draw down the same amount in federal funds.

Parson on Tuesday proposed another $272.4 million in higher education capital improvement projects. The funding will be appropriated through House Bills 18 and 19. The executive budget on those bills has the funding earmarked but does not detail specific projects. The governor's budget also doesn't make specific mention of Lincoln's land grant funding.

To help students get to institutions of higher education, Parson suggested increases or consistent funding to state scholarship programs, such as the A+ Scholarship that he suggests fully funding.

He supports an additional $32 million to expand the Career Ladder program, used to support the professional development of teachers, as well as an extra $800,000 for expansion of the Fast Track Workforce Incentive Grant, offered to adults returning to school for training in high-demand areas.

More money for apprenticeship programs in IT, education and public health and safety, as well as $38 million for MOExcels -- the employer-driven workforce education and training program for high-demand jobs -- are also among his proposals.

The governor is also seeking an additional $2.2 million to improve the state's 27 job centers.

"With more than 195,000 job openings in Missouri, we must make sure Missourians who need a job get a job," Parson said.

Businesses across the state consistently rank a lack of child care options as a top barrier to recruiting and retaining employees.

Parson is requesting $56 million to provide more pre-kindergarten options for families with 4-year-old children who qualify for free and reduced lunch programs. The proposal is expected to provide early childhood education access to approximately 17,000 more families throughout Missouri, according to the governor's office.

"We know child care remains a struggle for many parents and businesses," Parson said in his speech. "Child care providers often have to limit their hours due to staffing shortages or increase their prices. This poses a real challenge to parents as they weigh the decision to work or stay home."

More than half of Missouri residents lived in an area with a child care shortage before the COVID-19 pandemic closed about a third of facilities in the state, he said.

"We need to do better for our parents, children, providers and businesses," Parson said.

Rep. Crystal Quade, a Springfield Democrat offering the party's response to the governor's speech, said Parson's proposals have long been the positions of the minority party.

Parson makes I-70 a focus for budget heavy on infrastructure, education spending 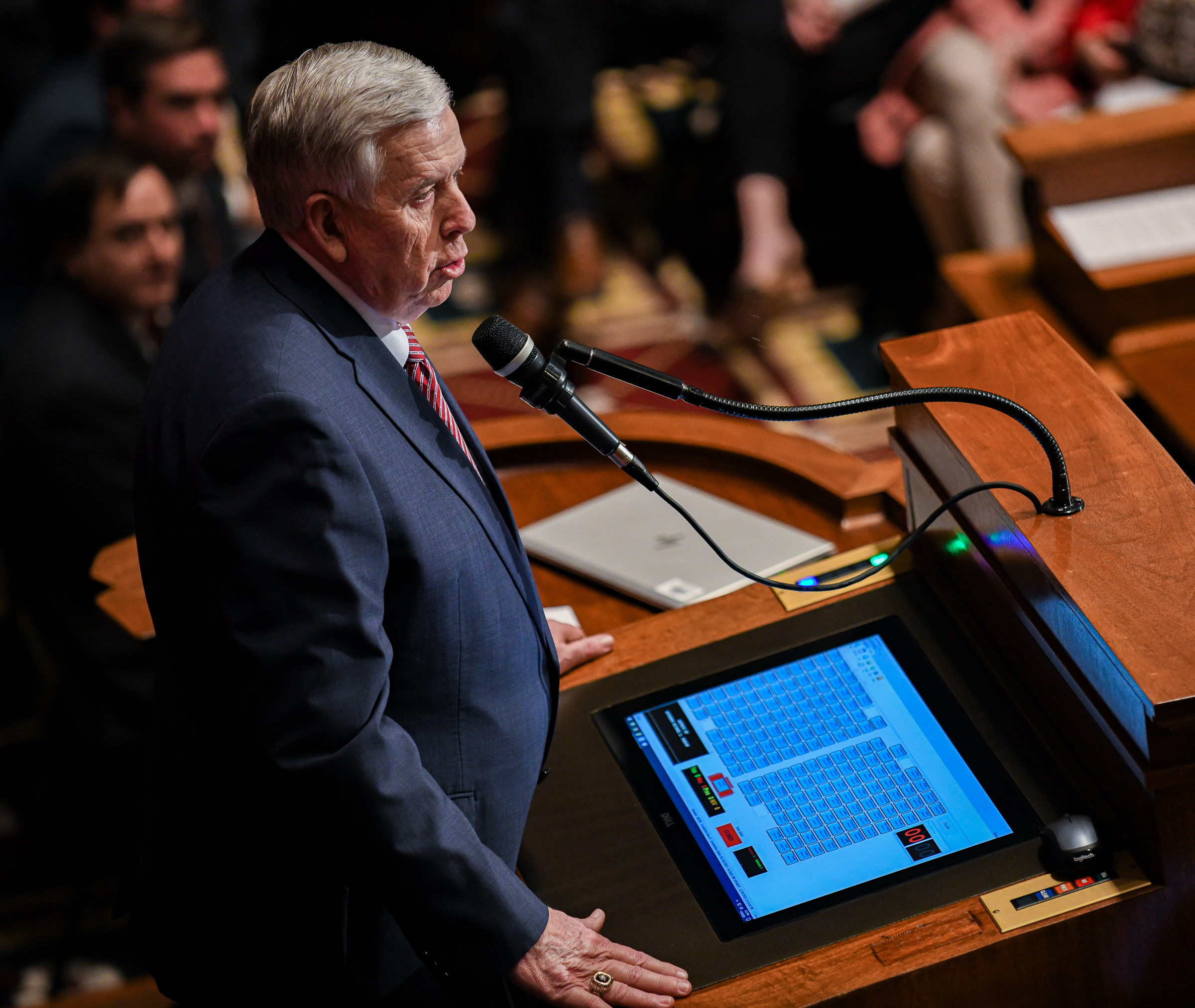 Julie Smith/News Tribune photo: Gov. Mike Parson is shown at the speaker's podium as he delivers the annual State of the State speech in the House of Representatives Chamber. The speech was paused numerous times as members of the joint session of legislators stood to applaud. 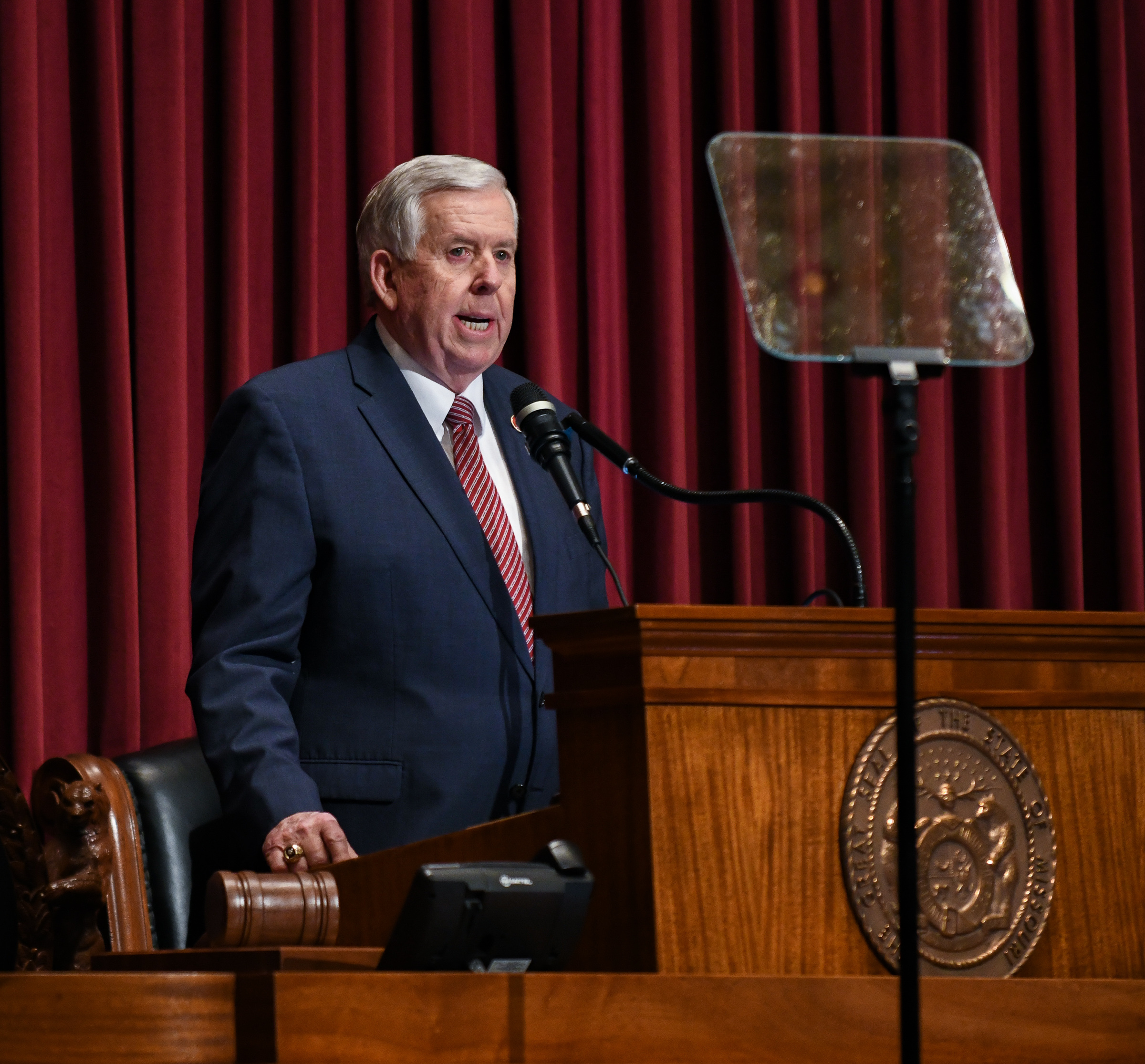 Julie Smith/News Tribune photo: Gov. Mike Parson looks to the teleprompter as he delivers the annual State of the State address Wednesday in the House of Representatives Chamber.