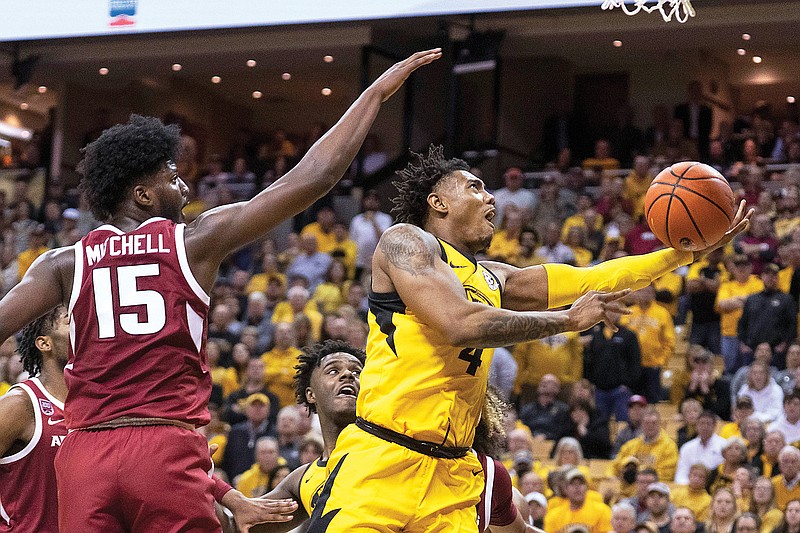 Missouri’s DeAndre Gholston shoots the ball past Makhi Mitchell of Arkansas during the second half of Wednesday night’s game at Mizzou Arena in Columbia. (Associated Press)

COLUMBIA -- It wasn’t the type of game Missouri likes to play.

There weren’t many 3-pointers, not too many transition points, not enough assists and a whole lot of stoppages, but the Tigers held on for a 79-76 Southeastern Conference win Wednesday night against the Arkansas Razorbacks.

Missouri went to the free-throw line 40 times, connecting on 30, while committing 23 fouls in a game that lasted nearly three hours at Mizzou Arena to break a five-game losing streak against the Razorbacks.

“The last five minutes, which was crucial, I thought I heard some great talk, some great conversation between our players,” Missouri coach Dennis Gates said. “They said, ‘Don’t panic, don’t blink, it’s a five-minute game.’ At that point, they did not pump the brakes, they didn’t think twice and they were able to go on a 22-9 run.”

Missouri got revenge after Arkansas was able to walk away with a 74-68 win Jan. 4. It looked like the Razorbacks might sneak out of Mizzou Arena with a series sweep when they took a 10-point lead with 7:03 left in the game.

Ricky Council hit two free throws, two of his 13 points, to make it 67-57 Arkansas, then Missouri began to close the gap.

Two DeAndre Gholston free throws, part of his 16 points which put him past 1,000 for his career, cut the lead to 67-59, then Sean East hit a jumper off one of Arkansas’ 21 turnovers to bring Missouri within 67-61.

“It means a lot to me actually,” Gholston said. “It’s a big stage. My teammates, my coaching staff all believe in me, so me getting to 1,000 points tonight was beautiful.”

D’Moi Hodge hit two free throws, then connected on one of two a minute later to cut the lead to 67-64 with 2:36 left. Hodge missed the second, but after an Arkansas rebound, the Razorbacks immediately turned the ball over.

Gholston hit a 3 from the left corner off a Nick Honor assist on the ensuing inbound, tying the game at 67.

The teams went back and forth, tying at 69 and 71, two of the 11 ties and 17 lead changes in the matchup, then Missouri took advantage of the many fouls being called.

“We knew coming in, it was going to be a unbelievable, physical, compelling game,” Gates said. “Both teams were going to fight to the very end no matter how many points you were up or down.”

Arkansas outrebounded Missouri 42-23, but the Tigers forced 13 steals and were able to outscore Arkansas 31-13 off turnovers.

The Tigers made a lot of use of their bench, getting 16 points from Gholston, 12 from East, eight from Isiaih Mosley -- all coming in the first half -- seven points from Aidan Shaw and a career-high five from Mohamed Diarra, who made Missouri’s first 3 of the game after the Tigers started 0-for-6 from beyond the arc.

“It takes a load off everyone,” Brown said. “We have so much depth, you’re not required to do as much as you once were. That’s all a plus.”

Missouri led for only 9:14 in the matchup.

Missouri was without third-leading scorer and second-leading rebounder Noah Carter as well as Mabor Majak because of health and safety protocols, and Brown had to leave the game late with an apparent ankle injury, but was able to return.