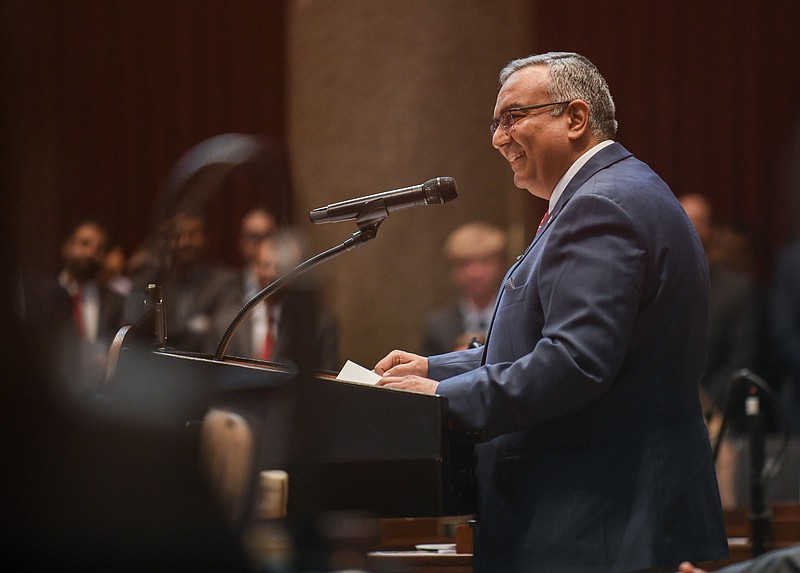 Julie Smith/News Tribune photo: Missouri Treasurer Vivek Malek addresses the public after being sworn in Tuesday, Jan. 17, 2023, during a ceremony in the Missouri House of Representatives. Malek is the first Indian American to hold statewide office and a large contingent of family, friends and well wishers filled the floor seats and gallery to witness the historic event.

Missouri Treasurer Vivek Malek was full of gratitude as he stood in front of a packed House chamber Monday afternoon.

The 45-year-old St. Louis immigration lawyer had just taken the oath of office and was officially installed as Missouri's chief financial officer. He's the first Indian American to hold a statewide office in Missouri -- a fact not lost on him or his many guests.

"I think this is a proud moment for Missourians, for everybody, for Americans, for all of us, especially people who have migrated to this country and have made this country their home," Malek said. "This is a matter of pride for them, and I share that pride with them."

Malek said he knew "quite a few" in the audience, which filled the House chamber floor and spilled into the upper galleries. He said some were invited and others he couldn't stop from coming.

Chartered buses brought people from Kansas City and St. Louis to attend, Malek said. Others came from different parts of the state, such as Joplin, Dexter, Lee's Summit and Cape Girardeau. A few, he said, were former clients who he helped get American citizenship.

Among the announced guests were statewide elected officials, state agency leaders, judges, lawyers, higher education leaders from Southeast Missouri State University (Malek's alma mater and where he previously served on the governing board), former treasurer Wendell Bailey and the Consulate General of India based out of Chicago. Former Lt. Gov. Peter Kinder served as the event's master of ceremonies.

Gov. Mike Parson in December appointed Malek, a Republican, to serve out the remaining two years of a term voters approved Republican Scott Fitzpatrick for in 2020. Last November, voters selected Fitzpatrick to become state auditor, leaving an opening at his previous post.

Fitzpatrick said Malek has the characteristics of a good state treasurer because he's intelligent, eager to learn and wants the job to be done right. He said there are few positions as crucial for the daily operation of state government as the treasurer and he has no doubt Malek will handle it well.

"I can't think of a better reminder of the fact that we truly are a nation of immigrants," Fitzpatrick said. "And for Vivek to accept this responsibility and give back to the nation and the state that welcomed him decades ago, it really is a beautiful American story."

Malek arrived in the U.S. as an international graduate student enrolled at Southeast Missouri State University in Cape Girardeau. He said he had $300 in his pocket, two suitcases and a "mixture of hope and apprehension" upon arriving in the country.

He flew 14 hours from his rural hometown in India and arrived in 2001 about a month before the country was thrust into turmoil with the Sept. 11 terrorist attack on the World Trade Center. He said the attack and America's response to it impressed within him a desire for American citizenship.

"I am blessed to have truly lived the American dream," Malek said. "I have enjoyed the blessings of freedom and liberty."

After gaining citizenship, Malek opened an immigration law office in St. Louis where he focused on legal immigration litigation and business immigration consulting. He's practiced law in Missouri since 2006 and opened the Law Offices of Vivek Malek in 2011.

Parson said Malek embodies the kind of opportunities found in the United States.

When making the appointment, Parson said he wanted to choose a man of faith, a family man and someone who believes in the state and country. He said he wanted to put someone in place that would support opportunities for future generations.

"Me and Teresa have been very fortunate to live the American dream but they haven't and I want to make sure they have the opportunity," Parson said after referencing Malek's three children who led the national anthem. "So I put people in the right place to deliver that to them."

The governor ended his remarks with a little advice: "If you can bring a bunch of people like this together and there's no free food or anything involved, you've got a great way for re-election."

Malek, a political newcomer with no experience in public office, will face a statewide election campaign in 2024. The governor has already thrown his political support behind him.

Malek described himself as a fiscal conservative and said he's focused on protecting taxpayer money by ensuring investments create the greatest returns, providing opportunities for growth in the programs his office administers and promoting the promise of America to others.

Missouri treasurers can serve up to two four-year terms, according to the state constitution. Treasurers serving more than two years of a previous treasurer's term can only serve one full four-year term.

The office doesn't require any qualifications beyond the basic requirements to run for statewide office in Missouri, which include being a U.S. citizen and Missouri resident for at least a year, staying current with tax payments and campaign finance disclosures, and not having a felony record.

Fitzpatrick was paid $107,746 for the job in 2021, according to the state's accountability portal.