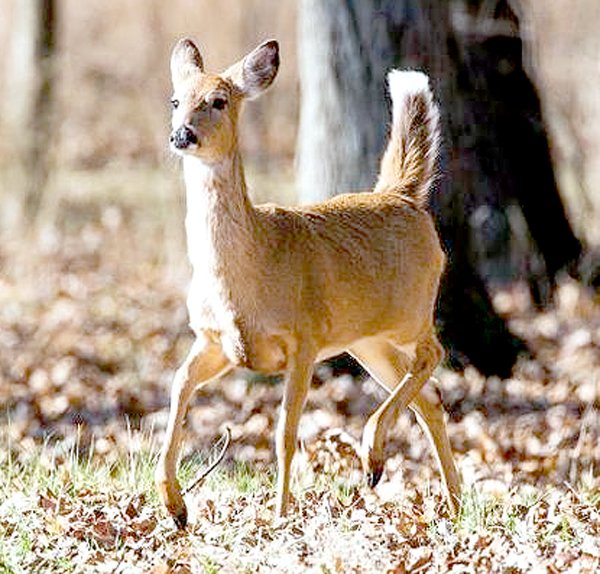 COURTESY PHOTO A Missouri whitetail roams in the woods.

Hunters in Callaway County harvested over 5,000 deer in the most recent hunting season, placing the county in second place for the overall deer season.

The deer hunting season in Missouri for 2022-2023 ended Jan. 15. According to preliminary reports from the Missouri Department of Conservation, a total of 299,721 deer were harvested in total across the state.

Callaway County harvested a total of 5,438 deer throughout the hunting season, placing it second place in Missouri. First place goes to Franklin County, with a total deer harvest of 6,471. Third place is Jefferson County, with 4,966 deer harvested.

The total amount for Missouri is increased from the 2021-2022 deer hunting season. That season saw a total harvest of 295,143 deer, according to the MDC.

Callaway County placed third in the 2021-2022 deer hunting season. A total of 4,185 deer were harvested in that season, according to the MDC.

Callaway County did not place in the top three for the archery season. Jefferson County placed first with 1,391 deer, Franklin County second with 1,182 deer, and St. Louis County placed third with 1,068, according to the MDC.

Callaway came in fourth place for the deer archery season. According to the MDC data, a total of 962 deer were harvested.

The total number of deer checked for the archery season decreased from the 2021-2022 deer archery season, when 59,498 deer were checked.

The top three for this season were Macon County with 73 turkeys, Green County and Franklin County tied for second with 66, and Putnam County with 50.

Callaway came in sixth place for the archery turkey season, with a total of 39 turkeys. This amount is just one turkey shy of fifth place, which Lawrence County and Phelps County tied for.

The total amount of turkeys harvested decreased from the 2021-2022 season, when 2,516 turkeys were harvested.

In that season, Callaway County placed third with 61 turkeys harvested.

The MDC also reported two firearms-related hunting incidents during the deer and turkey seasons, according to a release. Both incidents were non-fatal and were self-inflicted.