Parson to lean on old reliables during State of the State Speech to outline workforce development, education and infrastructure priorities 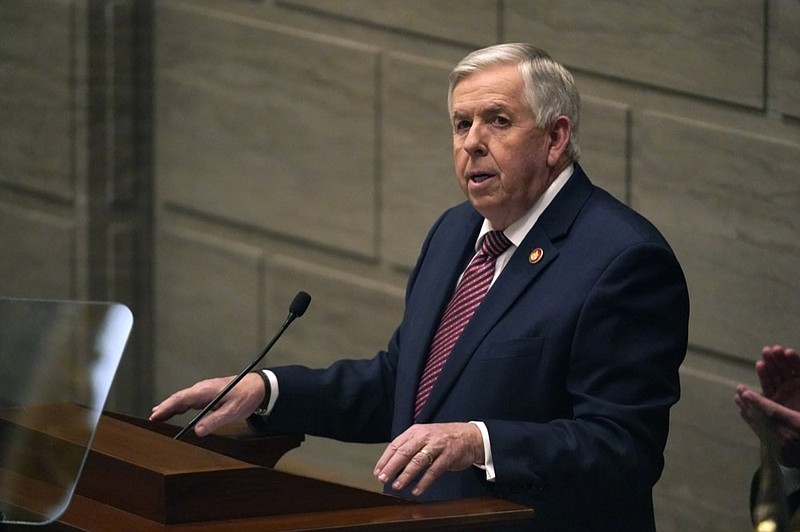 The Republican governor will once again focus on the three issues central to his administration as he lays out legislative priorities to fellow lawmakers and government leaders, spokeswoman Kelli Jones said.

"I can't give you any dollar amounts or any figures like that, but I can say that it's going to be very heavy on the workforce development and education and infrastructure," she said. "... He's really going to talk about the future and who we have to get ready for the future."

Parson will deliver the State of the State Address at 3 p.m. Wednesday in the House chamber. The speech is meant to provide an update on large-scale state government efforts under way and signal new priorities for the next five months as the General Assembly works through the legislative session.

Jones said education and workforce development are two sides of the same coin and are grouped together in the governor's speech. She declined to go into any more details regarding the content of the address or the governor's proposals for the state budget until after the speech is delivered.

Workforce development and infrastructure, as well as federal COVID-19 relief spending, were among the issues Parson spoke at length about during his State of the State Address last year. He's also previously told state lawmakers they need to start with education and creating an informed, skilled workforce if they want to make progress on policies in other areas.

Last year, Parson suggested record investments in higher education and the funding of transformational projects at public colleges and universities, as well as a boost in funding for Missouri Career Centers and workforce training programs.

To address infrastructure needs, he recommended hundreds of millions for broadband development and water projects, such as money for local governments to identify lead in service lines. He also suggested diverting funds to match local transportation projects.

The speech on Wednesday is expected to look fairly similar. Missouri is sitting on a $6 billion budget surplus that lawmakers are trying to decide what to do with.

Parson has already thrown his support behind a pay raise for state workers. The state raised wages last year so all of its employees are making at least $15 per hour, but area lawmakers say that wasn't enough because inflation grew beyond the 5.5 percent wage increase.

Parson included an 8.7 percent cost of living adjustment as part of his Fiscal Year 2023 Early Supplemental Budget request sent to state lawmakers Jan. 11. The request also includes an increase to shift differentials -- the extra bump in pay for those working outside normal business hours -- for congregate care staff within the Department of Social Services, Department of Corrections, Department of Mental Health and Missouri Veterans Commission. The cost of the pay raises would total $151.2 million, with $82.4 million coming from general revenue.

Parson said there are 7,000 open positions across state government in Missouri and there's "no question" employee recruitment and retention have been "a severe problem for our state and we must do better."

The proposal he suggested is based on the increase given to Social Security recipients this year and changes to the Consumer Price Index. He wants the General Assembly to pass the pay raise by March 1 to have it in the hands of state employees by March 31.

Parson's suggested pay raise may seem steep to some, but it keeps Missouri in contention to recruit and retain workers, lawmakers said this week.

Rep. Rudy Veit, R-Wardsville, said he was glad to see the raise for state workers.

"It's a good, positive step," Veit said. "I hope that's a number that can reasonably pass through the House and Senate."

"The rate that they got last year didn't keep up with inflation," Bernskoetter said. "So I'd like to see if we can improve the pay, especially for some of the jobs that are so hard to fill like in the hospitals and that kind of stuff."

Roughly 14,000 state employees live and work around the Capital City, according to the Jefferson City Area Chamber of Commerce, making it the top employer in the area.

"I agree with raising the salaries of our state workers," said Rep. Willard Haley, R-Eldon. "Missouri has entirely too many job vacancies in all departments. But, I am especially concerned about the need to increase the number of employees in the Department of Corrections and the Department of Transportation."

Haley said constituents employed in the departments have contacted him. They say they are understaffed and overworked.

"We not only need to keep the experienced workers in our employment as they are tempted to leave their state jobs to earn higher wages elsewhere, but we need to pay competitive salaries to be more inviting to others seeking good employment," he continued.

Central Missouri lawmakers agree that raising wages for state workers is a move constituents can rally around. However, many area lawmakers are uncertain, and possibly eager to hear, what other priorities Parson will offer up Wednesday during the annual State of the State Address.

As for workers, Haley said Missouri needs to find a way to increase the number of child care providers to free-up Missourians to enter the workforce. Haley, a former teacher, added he would support increasing teachers' salaries.

In last year's budget, lawmakers appropriated $10 million to help businesses create child care services or partner with child care providers. They also funded a temporary program Parson suggested to bring the minimum salary paid to Missouri teachers to $38,000. The state provided a portion of the funds and required school districts to contribute the rest.

Republican leaders in the Senate have said bolstering child care will be among their priorities this year as well. Senate President Caleb Rowden, R-Columbia, said he's also interested in tackling education reform this session.

"Public education -- I've seen a ton of bills up there," Veit said. "None protect public education. They all have messages that try to change it. Nobody wants to work on the system we have. To have good schools we need community input. I still think public education is the foundation of our democracy."

Some lawmakers are pushing to spend the budget surplus on another tax cut, but Parson has previously said he's satisfied with the one lawmakers passed during a special session last year. The most recent cut, passed last fall, reduces the top income tax rate from 5.3 percent to 4.95 percent, with additional cuts tied to various triggers.

Haley said the state needs to be wise in spending so it doesn't deplete the surplus too quickly, adding lawmakers should prepare for declines in state revenue as inflation eats through taxpayers' disposable income.

Missouri has robust economic growth and would like to maintain it, Veit said. The state is leading the nation in several areas, he said, and investments in infrastructure can help maintain that growth.

The growth is coming despite challenges, he continued.

"We keep talking about it," Veit said. "We have major roads that still need serious attention. What steps can we take to address I-70? That's connected with economic development."

Republican leaders in the House and Senate are expecting the governor to make announcements related to improving Interstate 70 on Wednesday, the Kansas City Star reported.

Another issue Haley said he'd be watching for is how the governor intends to address crime, especially in metropolitan areas.

Print Headline: Parson to lean on old reliables during State of the State Speech to outline workforce development, education and infrastructure priorities