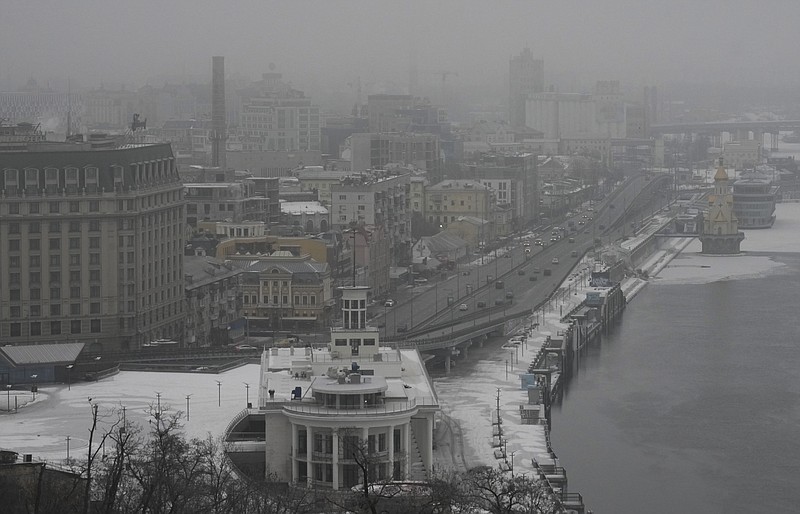 By SYLVIA HUI and HANNA ARHIROVA

Five people were killed and 39 wounded in the southeastern city of Dnipro, where a Russian missile strike destroyed a section of an apartment building, regional Gov. Valentyn Reznichenko said. Photos showed a large gap in the nine-story building.

Infrastructure facilities were also hit in the western Lviv region and Ivano-Frankivsk regions, in the Odesa region on the Black Sea and in northeastern Kharkiv. Kyiv, the capital, was also targeted.

Sunak made the pledge to provide Challenger 2 tanks and other artillery systems after speaking to Ukrainian President Volodymyr Zelenskyy on Saturday, the British leader's Downing Street office said in a statement.

It didn't say when the tanks would be delivered or how many. British media have reported that four British Army Challenger 2 main battle tanks will be sent to Eastern Europe immediately, with eight more to follow shortly after, without citing sources.

Zelenskyy tweeted his thanks to Sunak on Saturday "for the decisions that will not only strengthen us on the battlefield, but also send the right signal to other partners."

Ukraine has for months sought to be supplied with heavier tanks, including the U.S. Abrams and the German Leopard 2 tanks, but Western leaders have been treading carefully.

The Czech Republic and Poland have provided Soviet-era T-72 tanks to Ukrainian forces. Poland has also expressed readiness to provide a company of Leopard tanks, but President Andrzej Duda stressed during his recent visit to the Ukrainian city of Lviv that the move would be possible only as an element in a larger international coalition of tank aid to Kyiv.

Earlier this month, France said it would send AMX-10 RC armored combat vehicles to Ukraine, designated "light tanks" in French. The U.S. and Germany announced the same week that they would send Bradley fighting vehicles and Marder armored personnel carriers, respectively, for the first time.

Sunak's announcement came as Russian forces fired missiles at Kyiv and other parts of Ukraine on Saturday in the first major barrage in days.

In Dnipro, rescuers were using a crane to try to evacuate people trapped in the apartment building's upper stories, some of whom were signaling with the flashlights on their mobile phones, the deputy head of Ukraine's presidential office, Kyrylo Tymoshenko, said on Telegram. He also said there were likely people under the rubble.

In the northeastern Kharkiv region, Gov. Oleh Syniehubov said two Russian missiles hit an infrastructure object again on Saturday afternoon, following a similar attack in the morning, In the city of Kharkiv, the subway suspended operations amid the attacks, according to its Telegram channel.

Another infrastructure facility was hit in the western Lviv region, according to Gov. Maksym Kozytskyi.

Air defense systems were activated in other regions of Ukraine, as well, and as another round of air raid sirens sounded across the country in the afternoon, regional officials urged local residents to seek shelter.

Vitali Kim, governor of the southern Mykolaiv region, hinted in a Telegram post that some missiles have been intercepted over his province.

Military top commander Valeri Zaluzhny said that Russia overall fired 33 cruise missiles on Saturday, of which 21 were shot down.

Earlier in the day, explosions also rocked the capital, Kyiv. The blasts occurred before air sirens sounded, which is unusual. It's likely the explosions came ahead of the warning sirens because the attack was by ballistic missiles, which are faster than cruise missiles or drones.

"The ballistics are not easy for us to detect and shoot down," he told local media. The warning about the missile threat was late because of the lack of radar data and information from other sources.

An infrastructure target was hit in the morning missile attack, according to Ukrainian officials.

Explosions were heard in the Dniprovskyi district, a residential area on the left bank of the Dnieper River, Kyiv Mayor Vitali Klitschko said. Klitschko also said that fragments of a missile fell on a nonresidential area in the Holosiivskyi district on the right bank, and a fire briefly broke out in a building there. No casualties have been reported so far.

This was the first attack on the Ukrainian capital since Jan. 1.

On Saturday morning, two Russian missiles hit Kharkiv, Ukraine's second-largest city. The strikes with S-300 missiles targeted "energy and industrial objects of Kharkiv and the (outlying) region," governor Syniehubov said. No casualties have been reported, but emergency power cuts in the city and other settlements of the region were possible, the official said.

In the city of Avdiivka in eastern Ukraine where fighting is most intense, three people were killed in Russian artillery attacks on Saturday, mayor Vitalii Barabash said. One person died in a rocket attack in Kryvyi Rih, in the Dnipropetrovsk region, Reznichenko said.

The attacks follow conflicting reports on the fate of the fiercely contested salt mining town of Soledar, in Ukraine's embattled east. Russia claims that its forces have captured the town, a development that would mark a rare victory for the Kremlin after a series of humiliating setbacks on the battlefield.

Moscow has painted the battle for the town and the nearby city of Bakhmut as key to capturing the eastern region of the Donbas, which comprises of partially occupied Donetsk and Luhansk regions, and as a way to grind down the best Ukrainian forces and prevent them from launching counterattacks elsewhere.

But that cuts both ways, as Ukraine says its fierce defense of the eastern strongholds has helped tie up Russian forces. Western officials and analysts say the two towns' importance is more symbolic than strategic.

Follow AP's coverage of the war in Ukraine: https://apnews.com/hub/russia-ukraine