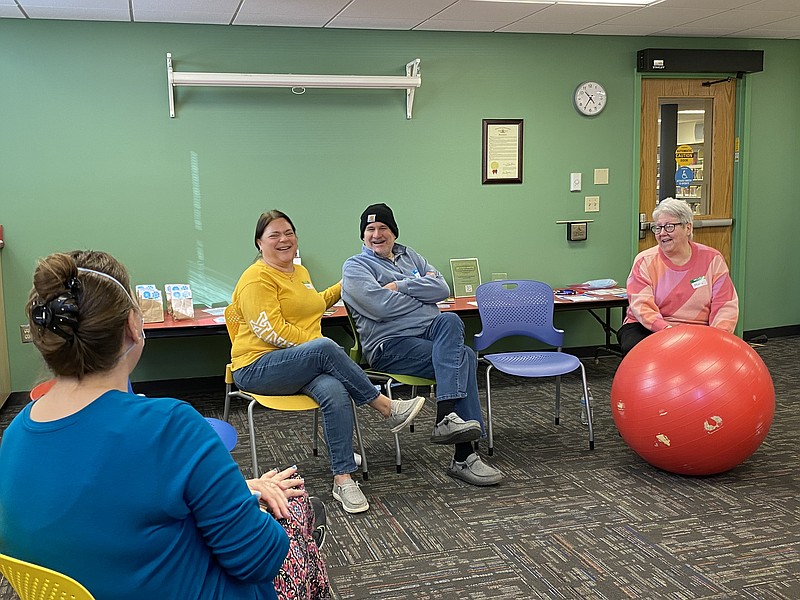 Anakin Bush/Fulton Sun Guests at the Memory Cafe share and discuss fun winter memories with the group. This is the first time Memory Cafe has been hosted at the Callaway County Public Library branch.

Walsworth in Fulton has begun the installation process for a brand new printing press for the facility.

The printing press is a Goss M600 and it's being shipped from Brisbane, Australia.

The printing press is being shipped in several seperate shipments. The first of 20 truckloads arrived in Fulton on Nov. 22, according to a release from Walsworth.

It is expected to be up and running in February.

The Missouri Women, Infants and Children program will again extend its cash value benefits for fruits and vegetable purchases until September.

The extension started Thursday. DHSS has issued several extensions of the program throughout the past three years, according to Lisa Cox, DHSS director of communications. It last issued an extension in September (to extend to January).

Missouri Auditor Scott Fitzpatrick is prioritizing reviews of school districts and COVID-19 relief programs as he settles into his new role.

Fitzpatrick announced his plans for office after he was sworn-in as Missouri's 39th auditor Monday in a ceremony in the Capitol Rotunda. With the COVID-19 pandemic causing a surge in government spending, the former state treasurer vowed to take a closer look at how schools and local governments are spending the money.

"My office will be a watchdog for taxpayers in the coming years as we review the spending and let them know how the money was used," he said.

A standoff with multiple law enforcement agencies resulted in one person being taken into custody Sunday.

The incident began early Sunday morning in the 200 block of Spalding Rd. in Holts Summit, according to a release from the Callaway County Sheriff's Office.

Officers with the Holts Summit Police Department responded to a report of a disturbance with a firearm. The officers determined shots had been fired in the area, and helped one person evacuate the house where the disturbance took place. This person was transferred to a safe location.

A Memory Cafe was hosted yesterday at the Callaway County Public Library in Fulton.

The Memory Cafe is "a social gathering for those experiencing any form of dementia or cognitive decline," according to the library's website.

This is the first time the event was held at the Callaway County branch of the Daniel Boone Regional Library. Several Memory Cafes have been held at the Columbia branch.

Local government officials and residents were not pleased with Route 54 plans presented by the Missouri Department of Transportation in a public meeting Tuesday evening at Jefferson City Hall.

The project, aimed at reducing traffic congestion along Route 54 between the Missouri River Bridge and the U.S. Route 63 interchange, would close the Route W (Airport Road) ramp to Route 54, with two of the three proposals calling for construction of a new ramp. The other option would eliminate the ramp entirely.

The Jefferson City Council is completely opposed to the plan that calls for the elimination of the Route W ramp, and passed a resolution stating such in November.

The Fulton City Council met for a regularly scheduled meeting on Tuesday, where they discussed parking requirements at Willow Creek Subdivision.

A representative of Lewis-Bade, Inc. spoke to the city council about requesting permission to deviate from the city's two-way parking requirement. The request would allow roads in the subdivision to be 28-feet wide, with two-way traffic and parking on one side of the street.

This is different from the City of Fulton code which requires two-way parking on both sides of the road, unless a deviation is approved from the city council.

The request would also up the shift differential -- an extra bump in pay for those working outside of normal business hours -- for congregate care staff within the Department of Social Services (DSS), Department of Corrections (DOC), Department of Mental Health (DMH) and the Missouri Veterans Commission.

Fulton Rotarians heard about a service trip that one Fulton Rotary Club member went on.

Mary Ann Beahon went on the trip to Mexico in late November. She went alongside two members of the Rotary Club of Columbia.

The purpose of the trip was to visit service projects that have been funded together by the United States and Mexico, Beahon said.

Upon arrival in Mexico, Beahon and the Rotarians attended a welcome dinner hosted by the Rotary Club of Tlaquepaque Industrial.

Congressman Blaine Luetkemeyer announced the continuation of the Valentines for Veterans program on Thursday.

Valentines for Veterans "asks Third District residents to send a kind note thanking our nation's veterans for their service," according to a release.

This is the 7th year the program has been offered. Luetkemeyer began the program in 2016.

Print Headline: In case you missed it A recap of the news gathered by the Fulton Sun the week of January 13