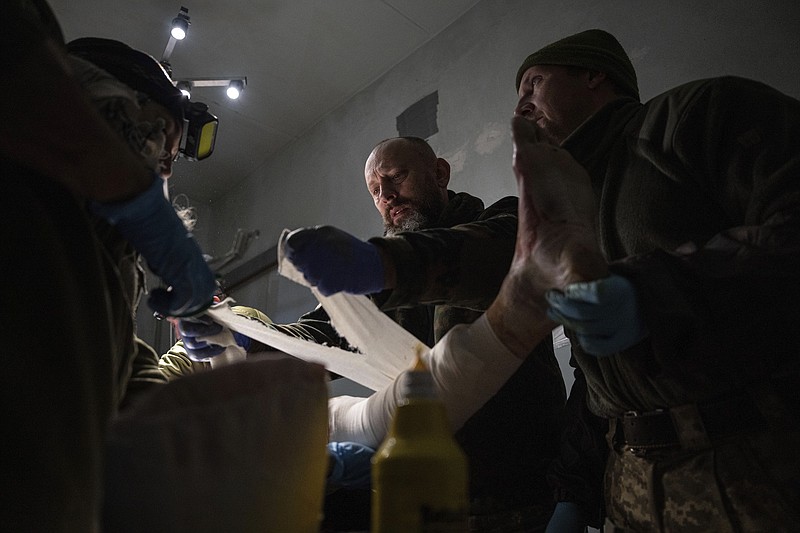 Ukrainian military doctors treat their injured comrade who was evacuated from the battlefield at the hospital in Donetsk region, Ukraine, Monday, Jan. 9, 2023. The serviceman did not survive. (AP Photo/Evgeniy Maloletka)

KYIV, Ukraine (AP) -- Russian forces are escalating their onslaught against Ukrainian positions around the wrecked city of Bakhmut, Ukrainian officials said, bringing new levels of death and devastation in the grinding, monthslong battle for control of eastern Ukraine that is part of Moscow's wider war.

"Everything is completely destroyed. There is almost no life left," Ukrainian President Volodymyr Zelenskyy said late Monday of the scene around Bakhmut and the nearby Donetsk province city of Soledar.

"The whole land near Soledar is covered with the corpses of the occupiers and scars from the strikes," Zelenskyy said. "This is what madness looks like."

The Kremlin, whose invasion of its neighbor 10 1/2 months ago has suffered numerous reversals, is hungry for victories. Russia illegally annexed Donetsk and three other Ukrainian provinces in September, but its troops have struggled to advance.

After Ukrainian forces recaptured the southern city of Kherson in November, the battle heated up around Bakhmut.

Ukraine's deputy defense minister, Hanna Malyar, said Russia has thrown "a large number of storm groups" into the fight for the city. "The enemy is advancing literally on the bodies of their own soldiers and is massively using artillery, rocket launchers and mortars, hitting their own troops," she said.

Pavlo Kyrylenko, the Donetsk region's Kyiv-appointed governor, on Tuesday described the Russian attacks on Soledar and Bakhmut as relentless.

"The Russian army is reducing Ukrainian cities to rubble using all kinds of weapons in their scorched-earth tactics," Kyrylenko said in televised remarks. "Russia is waging a war without rules, resulting in civilian deaths and suffering."

Wounded soldiers arrive around the clock for emergency treatment at a Ukrainian medical stabilization center near the front line around Bakhmut. Medics fought for 30 minutes Monday to save a soldier, but his injuries were too severe.

Another soldier suffered a head injury after a fragment pierced his helmet. Medics quickly stabilized him enough to transfer him to a military hospital.

"We fight to the end to save a life," Kostyantyn Vasylkevich, a surgeon and the center's coordinator, told the Associated Press. "Of course, it hurts when it is not possible to save them."

The Moscow-backed leader of the occupied areas of Donetsk said Tuesday that Russia's forces were "very close" to taking over Soledar. But the gains were coming "at a very high price," Denis Pushilin told Russian state TV.

Control over the city would create "good prospects" for taking over Bakhmut, as well as Siversk, a town further north where Ukrainian fortifications "are also quite serious," Pushilin said.

The U.K. Defense Ministry concurred with that appraisal of the battle developments. Russian troops alongside soldiers from the Wagner Group, a Russian private military contractor, have advanced in Soledar and "are likely in control of most of the settlement," the ministry tweeted Tuesday.

It said that taking Soledar, 6 miles north of Bakhmut, was likely Moscow's immediate military objective and part of a strategy to encircle Bakhmut. But it added that "Ukrainian forces maintain stable defensive lines in depth and control over supply routes" in the area.

The Wagner Group's leader, Dmitry Prigozhin, confirmed in a post on a Russian social media platform Tuesday that his forces are fighting in the area and acknowledged "heavy battles" in Soledar against a Ukrainian army he said "bravely fights."

A Western official, speaking on condition of anonymity, said the Wagner Group "has moved from being a niche sideshow of Russia's war to a major component of the conflict," adding that its forces now make up as much as a quarter of Russian combatants.

An exceptional feature of the fighting near Bakhmut is that some of it has taken place around entrances to disused salt mine tunnels which run for some 120 miles, the British intelligence report noted.

"Both sides are likely concerned that (the tunnels) could be used for infiltration behind their lines," it said.

In Russia, two signs emerged Tuesday that officials were grappling with the military shortcomings revealed during the conflict in Ukraine.

Russian Defense Minister Shoigu, whose performance has been fiercely criticized in some Russian circles but who has retained Russian President Vladimir Putin's confidence, said Tuesday his military would use its experience in Ukraine to improve combat training.

Military communications and control systems will be improved using artificial intelligence, Shoigu said, and troops will be given better tactical gear and equipment.

The second indication of trouble involves Russia's production of weapons and other supplies its military needs for the fight in Ukraine. The deputy head of Russia's Security Council, Dmitry Medvedev, warned that officials who failed to meet deadlines for such items could face criminal charges.

Putin appointed Medvedev last month to head a new commission tasked with trying to solve the military's supply problems. Numerous reports have suggested Russia is running low on certain weapons and was sending some troops into battle with insufficient equipment and clothing. 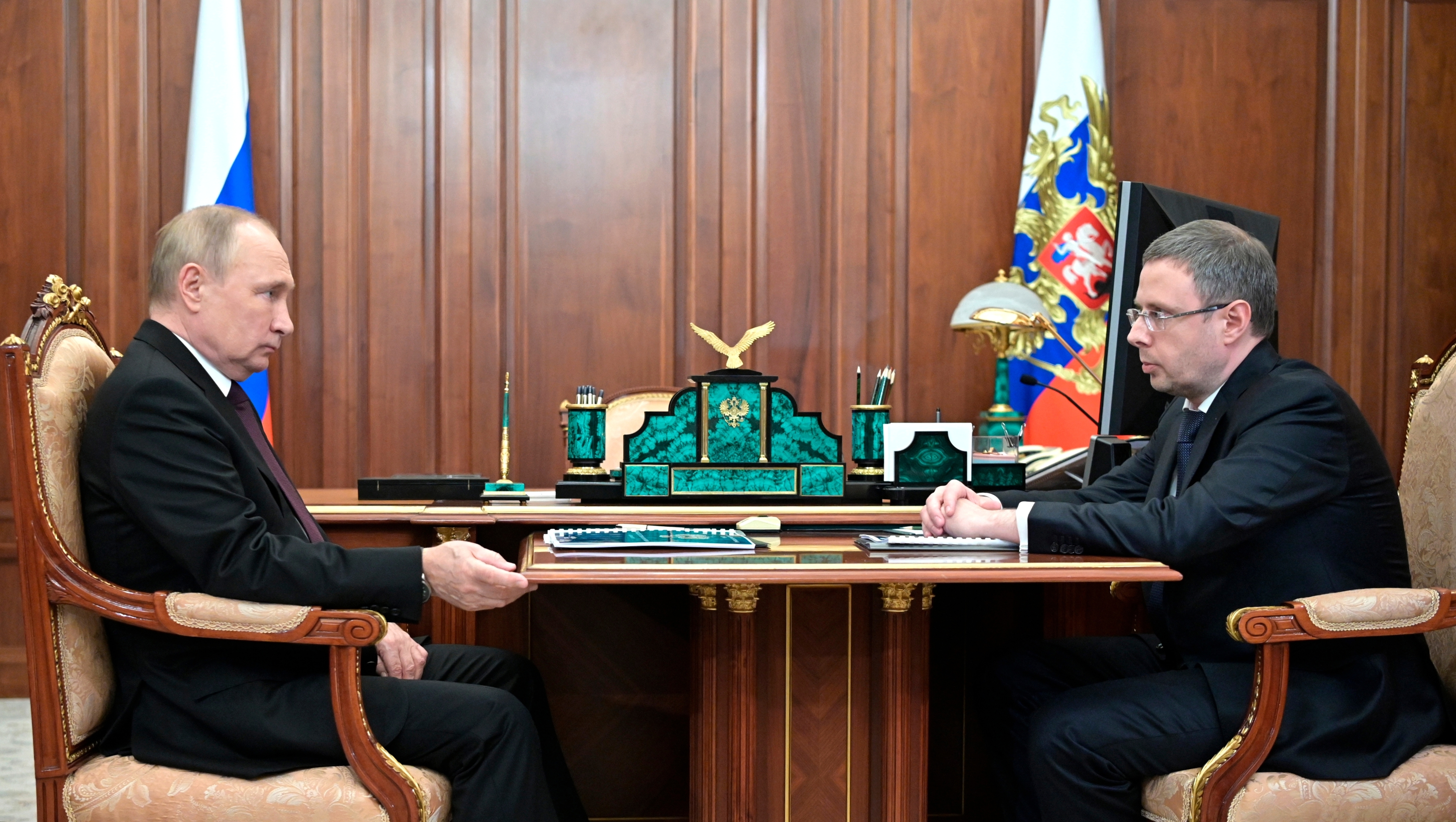 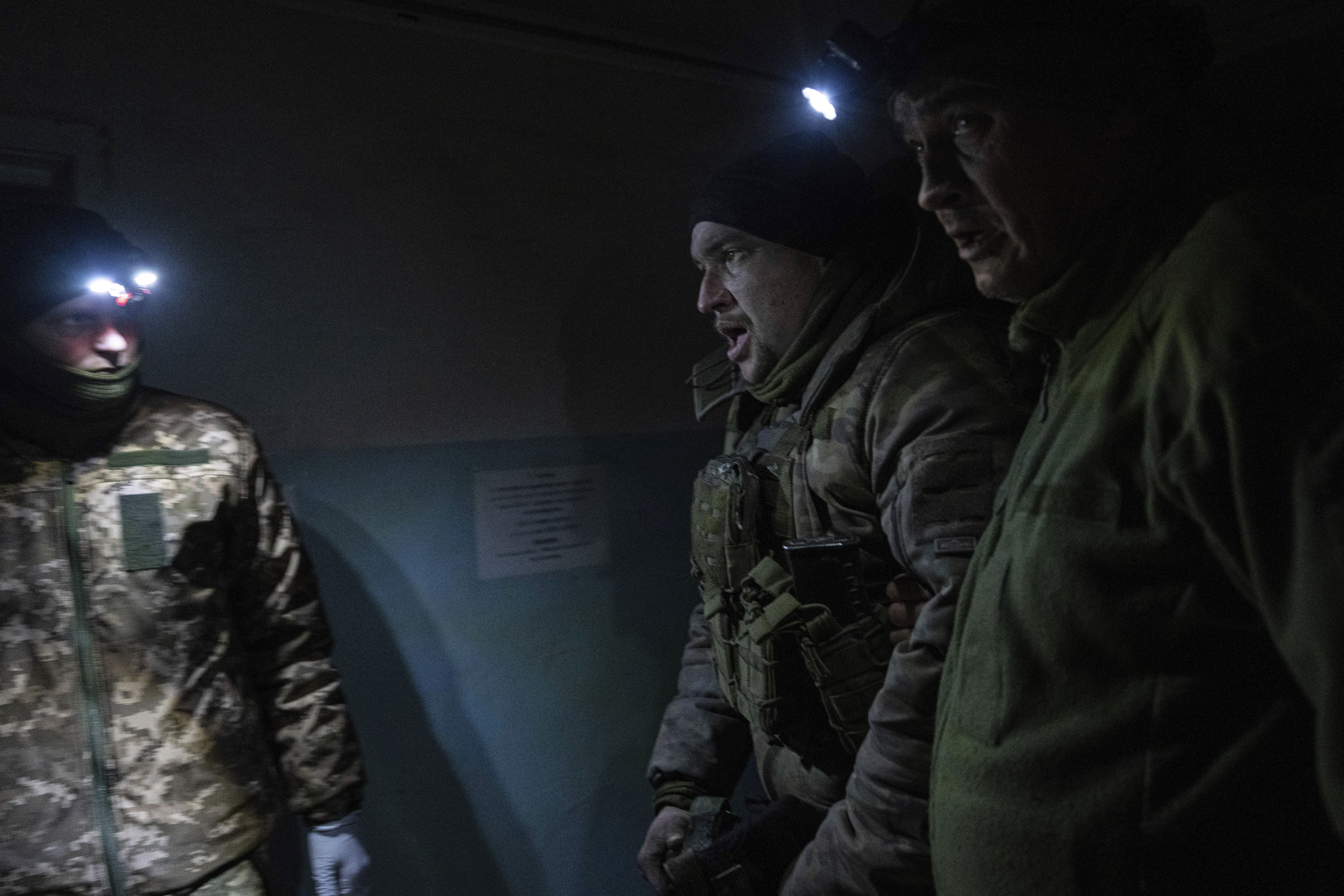 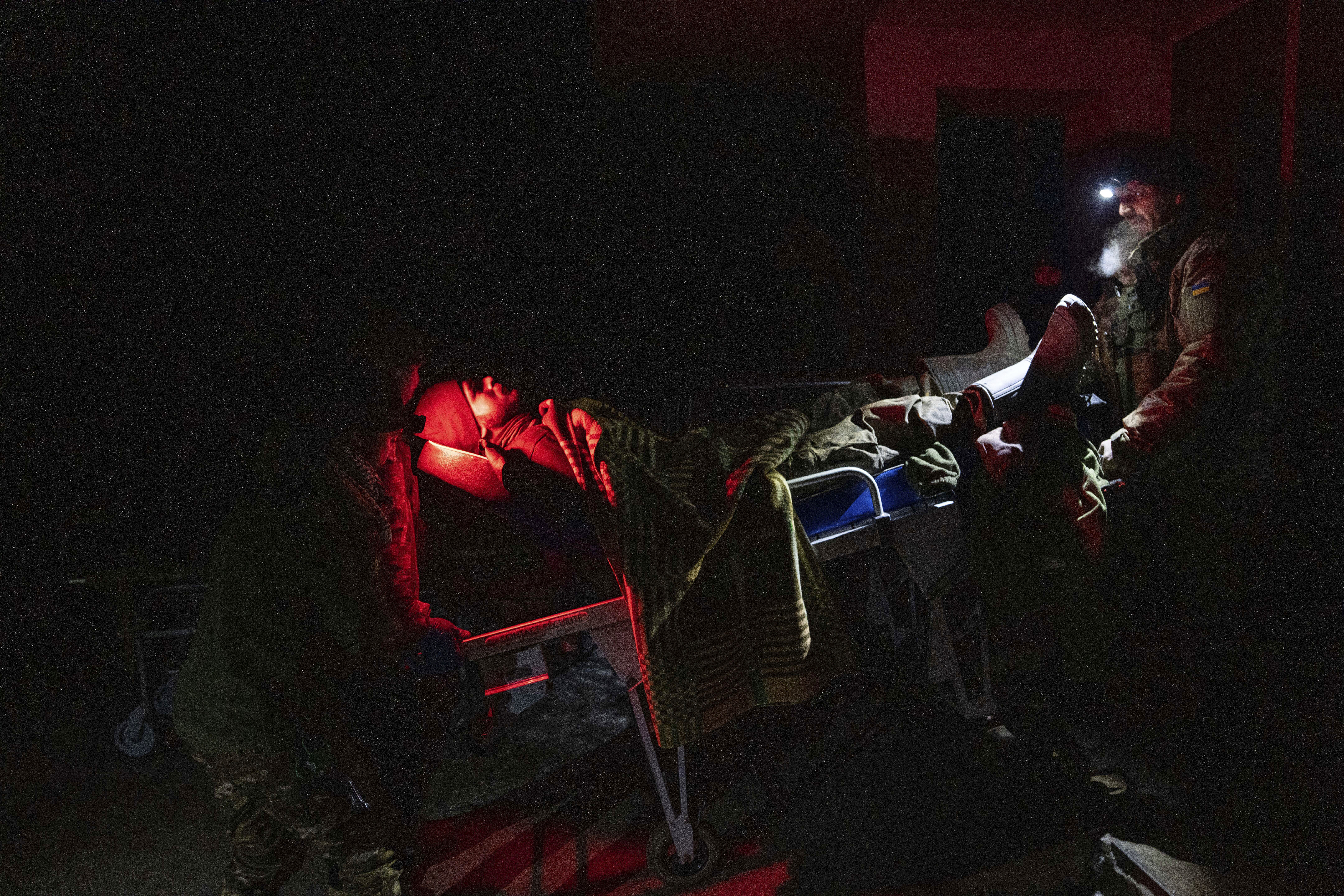 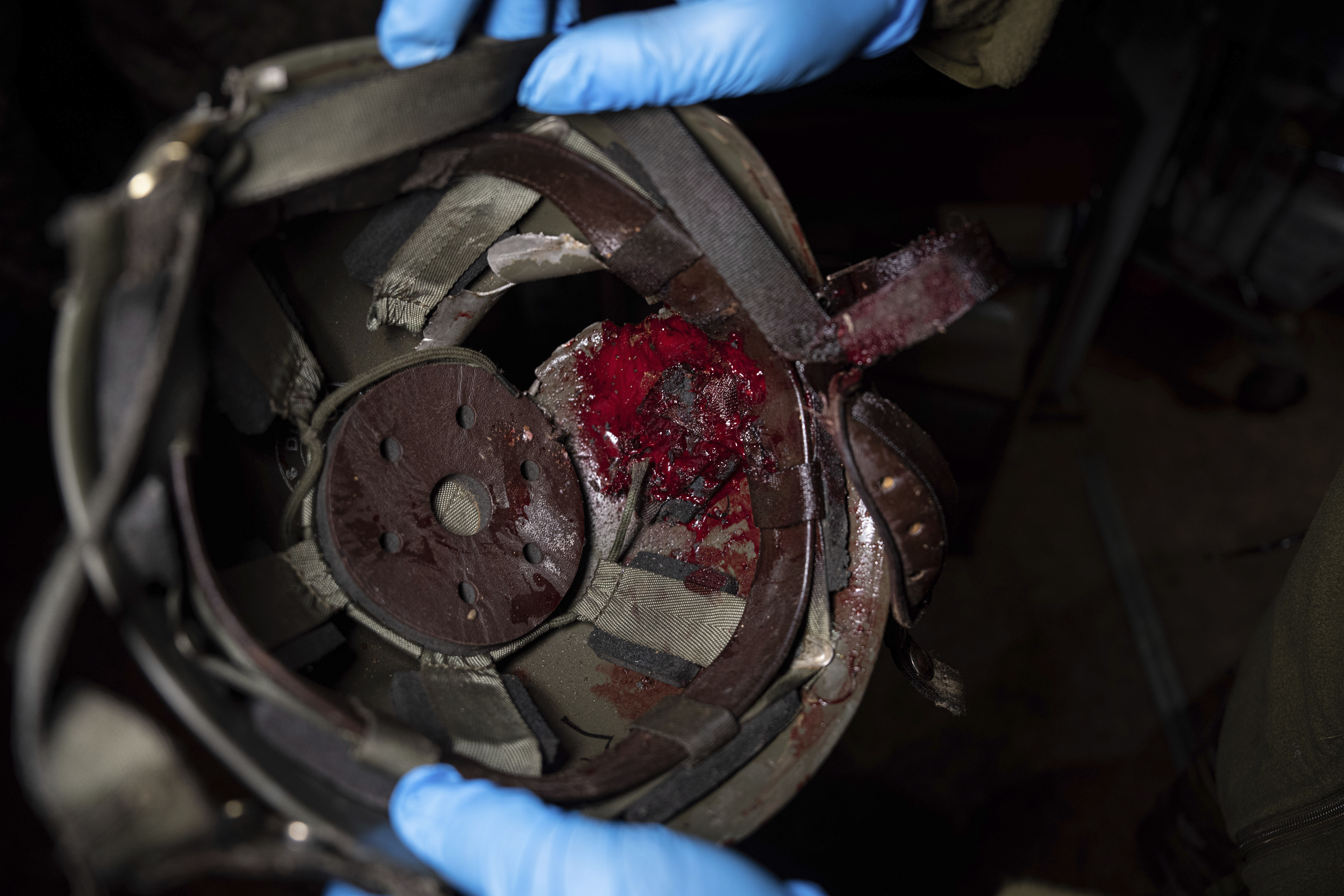 A Ukrainian military medic shows a helmet of an injured serviceman at the hospital in Donetsk region, Ukraine, Monday, Jan. 9, 2023. (AP Photo/Evgeniy Maloletka) 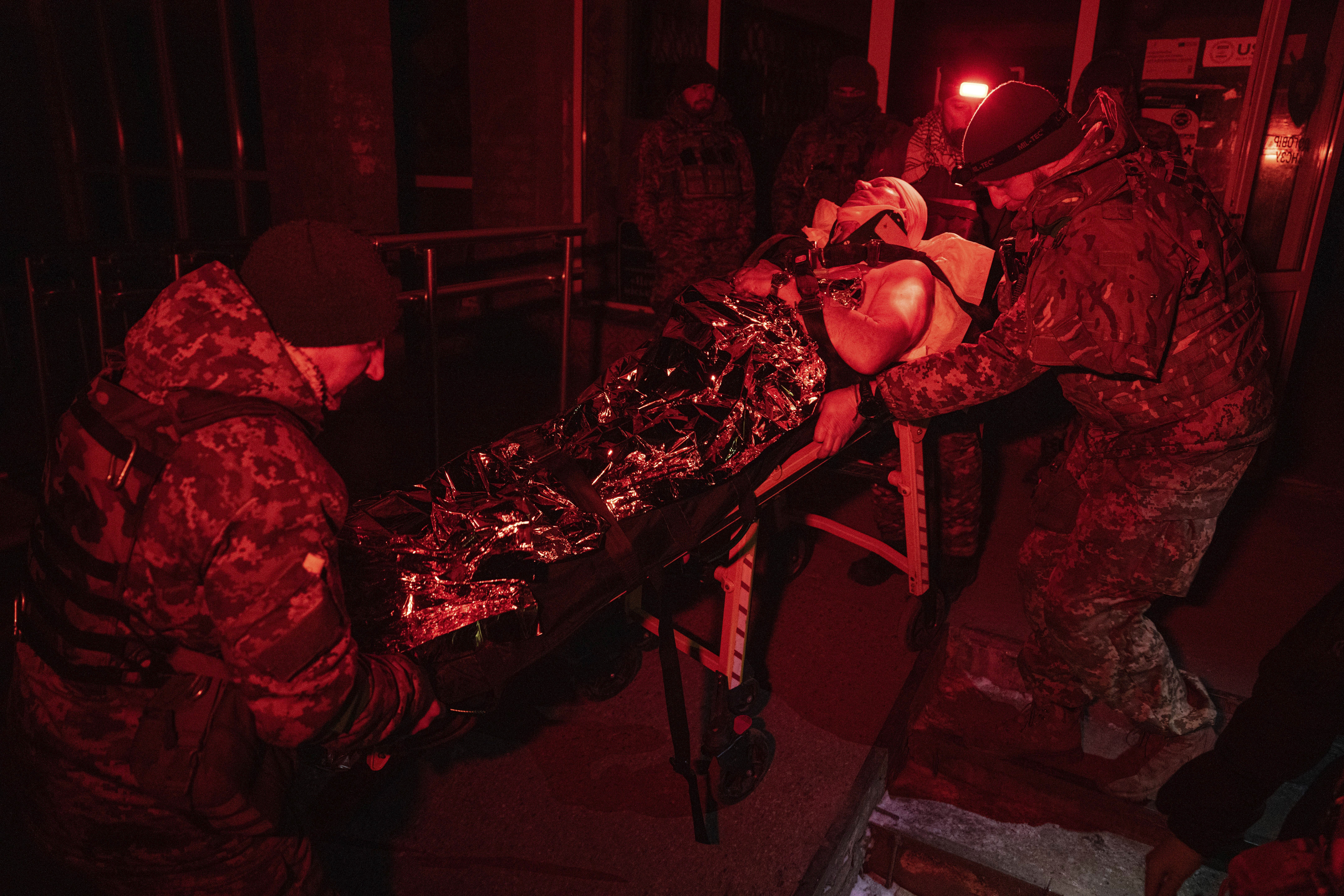 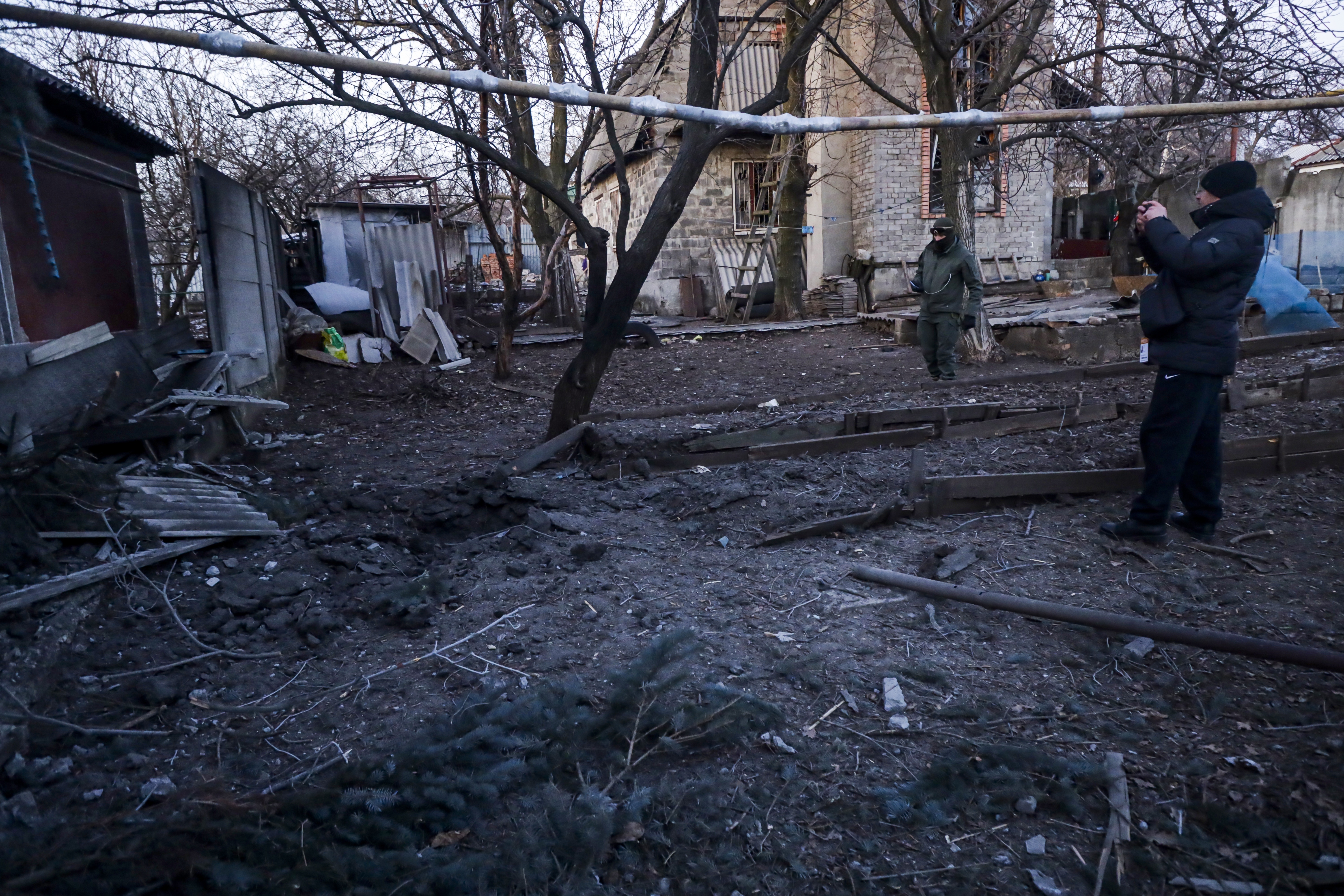 Investigators inspect a site of a damaged part of an house after what Russian officials in Donetsk said it was a shelling by Ukrainian forces, in Donetsk, in Russian-controlled Donetsk region, eastern Ukraine, Tuesday, Jan. 10, 2023. (AP Photo) 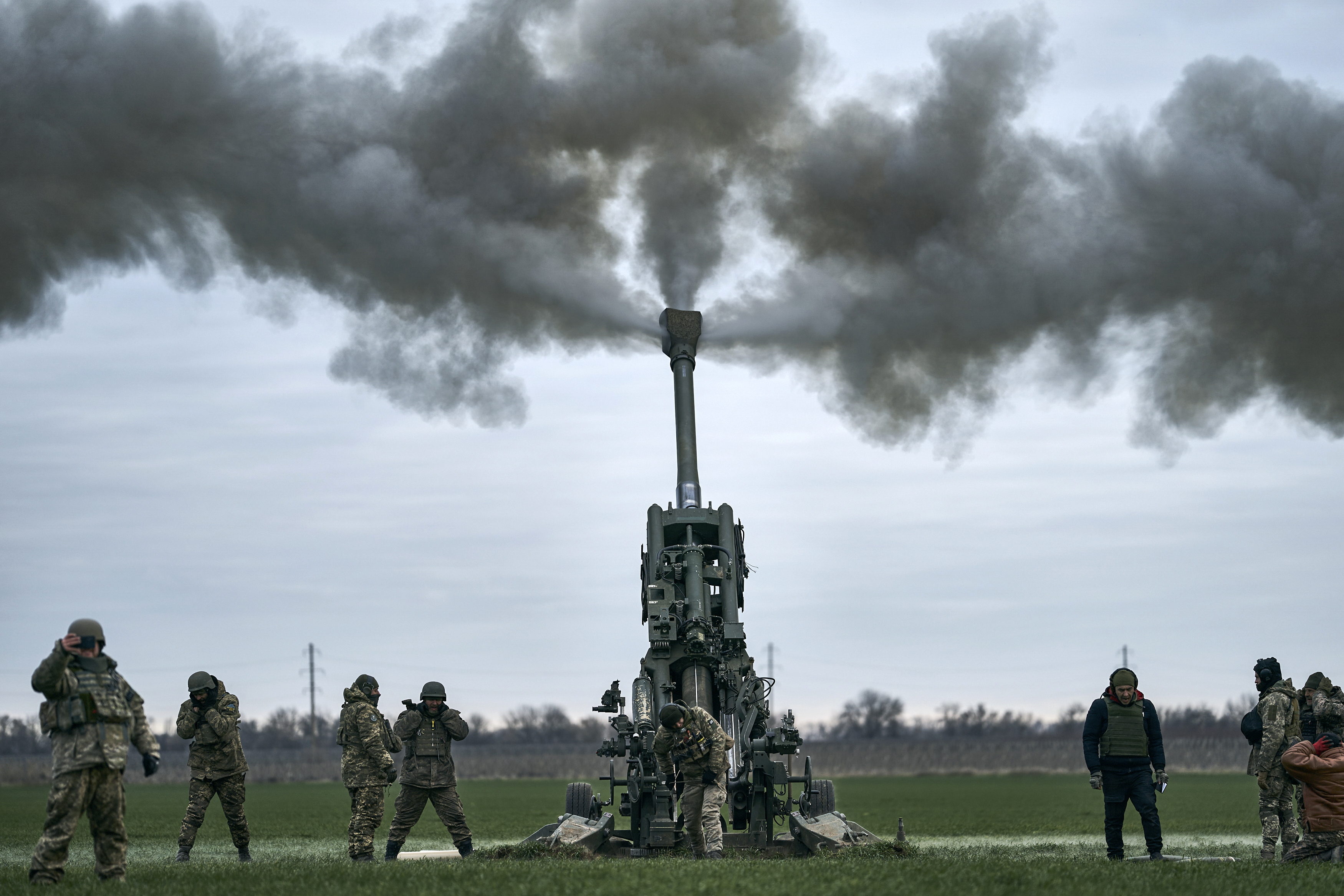 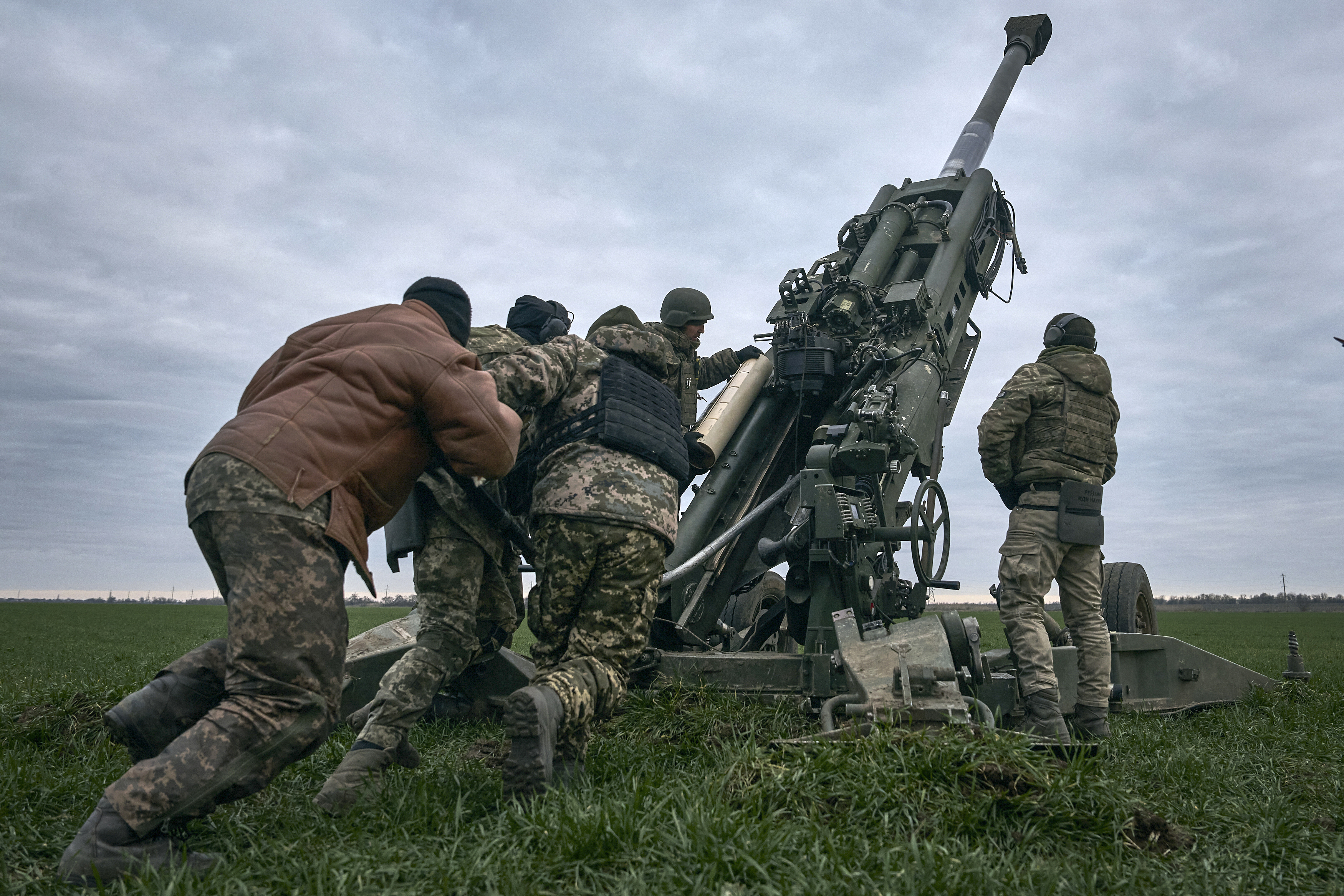 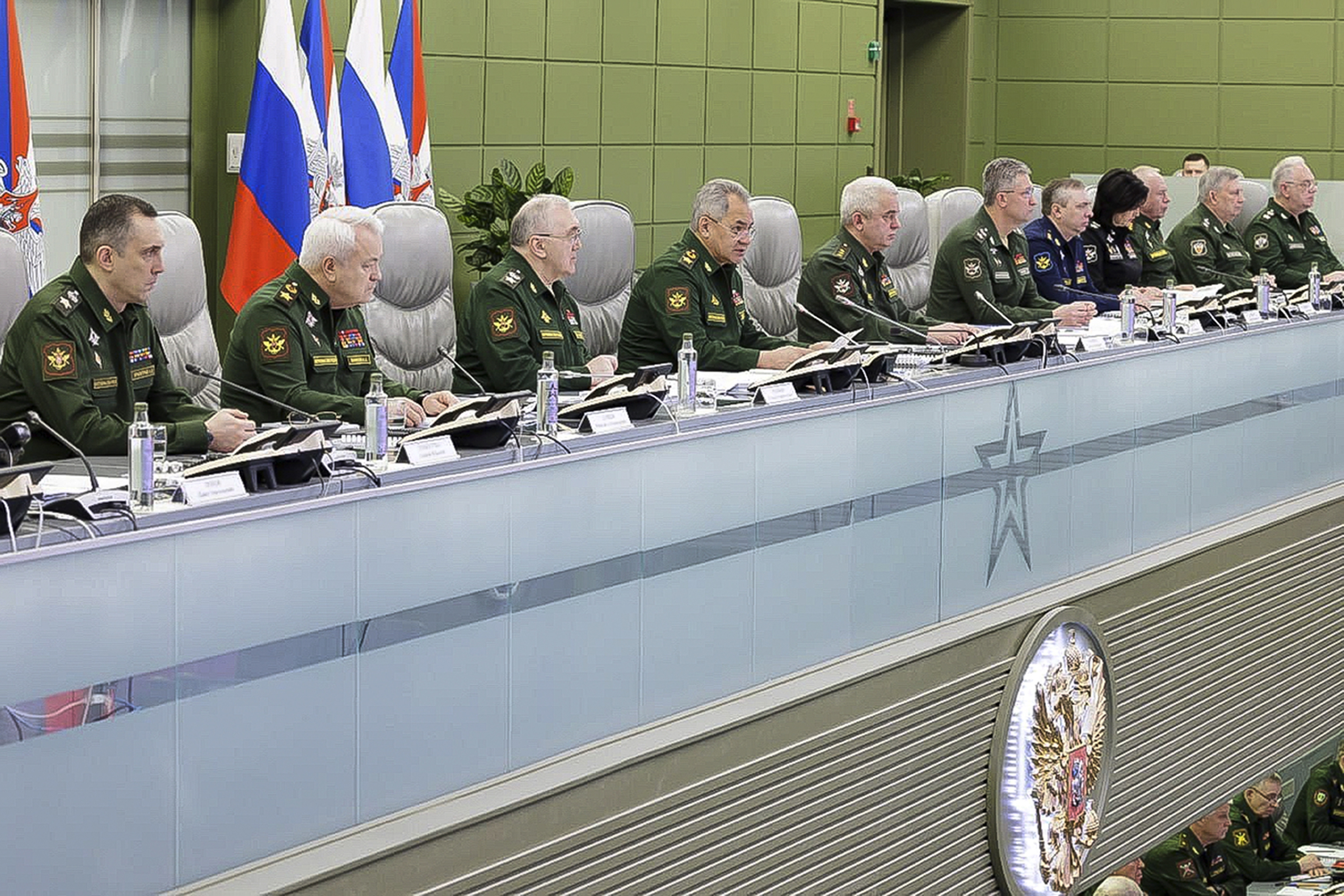