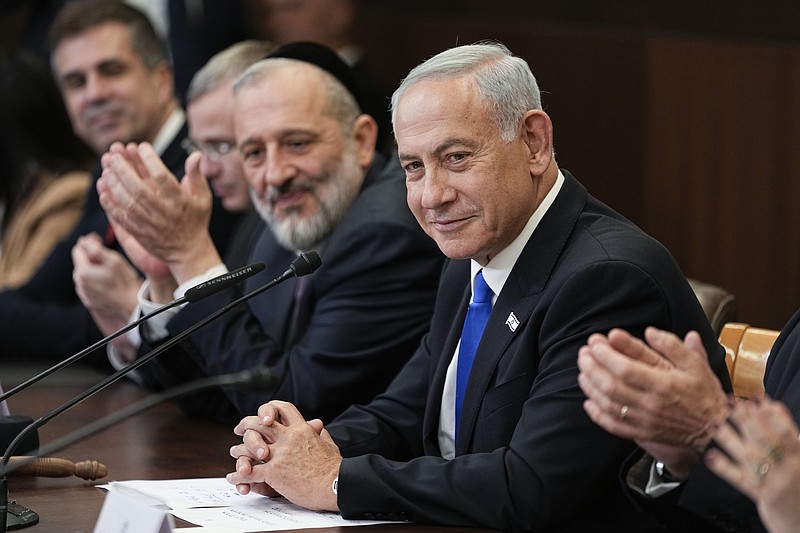 Just days into its mandate, a controversial member of Netanyahu's right-wing Cabinet riled U.S. diplomats with a visit to a Jerusalem holy site that some believe may be harbinger of other contentious moves, including vast expansions of Jewish settlement construction on land claimed by the Palestinians.

And, Netanyahu's government adopted punitive measures against the Palestinians that run in direct opposition to several recent Biden moves to boost U.S.-Palestinian relations, including restoring assistance to the Palestinian Authority that had been cut during the Trump administration and allowing Palestinian officials to visit the United States.

The new government is an unwelcome complication for a Biden national security team seeking to shift attention away from the Middle East and toward rivals like China and Russia. It also comes as Republicans take control of the House of Representatives and are eager to cast Biden as unfriendly to Israel ahead of the 2024 presidential election.

Bracing for more turmoil, Biden is dispatching his national security adviser to Israel in mid-January in a bid to forestall potentially deepening rifts between his administration and its top Mideast partner. That visit by Jake Sullivan may be followed by other high-level trips to Israel, including one by Secretary of State Antony Blinken, according to administration officials.

Their message goes beyond warnings about inflaming tensions with Palestinians: It's also about not cozying up with Russia, particularly now that Moscow is relying on Israel's main enemy, Iran, in its war on Ukraine; and not upsetting the delicate Middle East security balance.

Since Netanyahu won hotly contested elections last year with huge support from the Israeli right, U.S. officials have sought to tamp down predictions of a collision course, saying they will judge his government on actions rather than personalities. Biden himself spoke of his years-long relationship with Netanyahu.

"I look forward to working with Prime Minister Netanyahu, who has been my friend for decades, to jointly address the many challenges and opportunities facing Israel and the Middle East region, including threats from Iran," Biden said when Netanyahu took office Dec. 29.

Yet while Biden and Netanyahu have known each other for years, they are not close. Biden and former Obama administration officials who now work for Biden still harbor resentment toward the prime minister who, during his previous iteration as Israel's leader, sought to derail their signature foreign policy achievement: the Iran nuclear deal.

Still, the administration is signaling it will engage with Netanyahu while avoiding more extreme members of his government. That approach wouldn't be unprecedented in the region: The U.S. deals with Lebanon's government while shunning members from the Hezbollah movement, a designated foreign terrorist organization that is nonetheless a domestic political power. But, it would be remarkable for the U.S. to take a similar approach with such a close ally.

"We will be dealing directly with Prime Minister Netanyahu," State Department spokesman Ned Price said this week when asked about possible contacts with Israeli National Security Minister Itamar Ben-Gvir's, whose visit to the site known to Jews as the Temple Mount and to Muslims as the Noble Sanctuary prompted a major outcry.

The inclusion of Ben-Gvir, a West Bank settler leader, and other extreme right-wing figures in Netanyahu's government who are hostile to the Palestinians and opposed to a two-state resolution has put Israel and the United States on opposite paths.

Wood noted Netanyahu had pledged to preserve the status quo -- "We expect the government of Israel to follow through on that commitment," he said -- and stressed the administration placed a priority on preserving the possibility of a two-state solution.

But on Friday, Netanyahu's Security Cabinet approved a series of punitive steps against the Palestinian leadership in retaliation for the Palestinians pushing the U.N.'s highest judicial body to give an opinion on the Israeli occupation of the West Bank.

Those moves underscored the hardline approach to the Palestinians that Netanyahu's government has promised at a time of rising violence in the occupied territories.

The Security Cabinet decided to withhold millions of dollars from the Palestinian Authority and transfer those funds to a compensation program for the families of Israeli victims of Palestinian militant attacks. And, it will deny benefits, including travel permits, to Palestinian officials who "are leading the political and legal war against Israel."

Meanwhile, Biden's administration is moving in a diametrically opposed direction. Since taking office, the administration has reversed the Trump ban on aid and provided more than $800 million in economic, development, security, and other assistance to the Palestinians and the UN agency for Palestinian refugees.

In the fall, the State Department obtained a Justice Department opinion that allows Palestinian officials to visit the United States and spend money in the U.S. despite laws barring such travel and transactions and a Supreme Court ruling that Congress has an enforceable role in the foreign policy process.

The administration "may reasonably assess that being prevented from hosting the PLO delegation in Washington would seriously impair the president's diplomatic efforts," the Justice Department said in a little-noticed Oct. 28th opinion.

Then, exactly one week before Netanyahu took office in late December, the State Department imposed but immediately waived terrorism sanctions against the Palestinian leadership, saying engagement with the Palestinians is a critical U.S. national security interest.

On Dec. 22, Deputy Secretary of State Wendy Sherman notified Congress she had imposed travel bans on senior leaders of the Palestinian Authority and Palestine Liberation Organization because they "are not in compliance" with requirements to tamp down and publicly condemn terrorist attacks against Israelis.

But, in the same notification, the State Department said Sherman had waived the travel bans "based on her determination that such a waiver is in the national security interests of the United States."

"An enduring and comprehensive peace between Israel and the Palestinians remains a longstanding goal of U.S. foreign policy," the department said. "A blanket denial of visas to PLO members and PA officials, to include those whose travel to the United States to advance U.S. goals and objectives, is not consistent with the U.S. government's expressed willingness to partner with the PLO and PA leadership."

Alon Liel, a former director-general of the Israeli Foreign Ministry, said further U.S. rapprochement with Palestinians may be the only way to influence Netanyahu. "If they really want to inflict pressure (on Israel), Biden tomorrow should say in the coming months, we will consider reopening the Palestinian embassy in Washington. Then they will see the earth shaking here," Liel said.

"But there is no sign of that," he said. "As long as they say, 'We're worried about your democracy,' those words are meaningless because there were so many words. There's nothing behind the words." 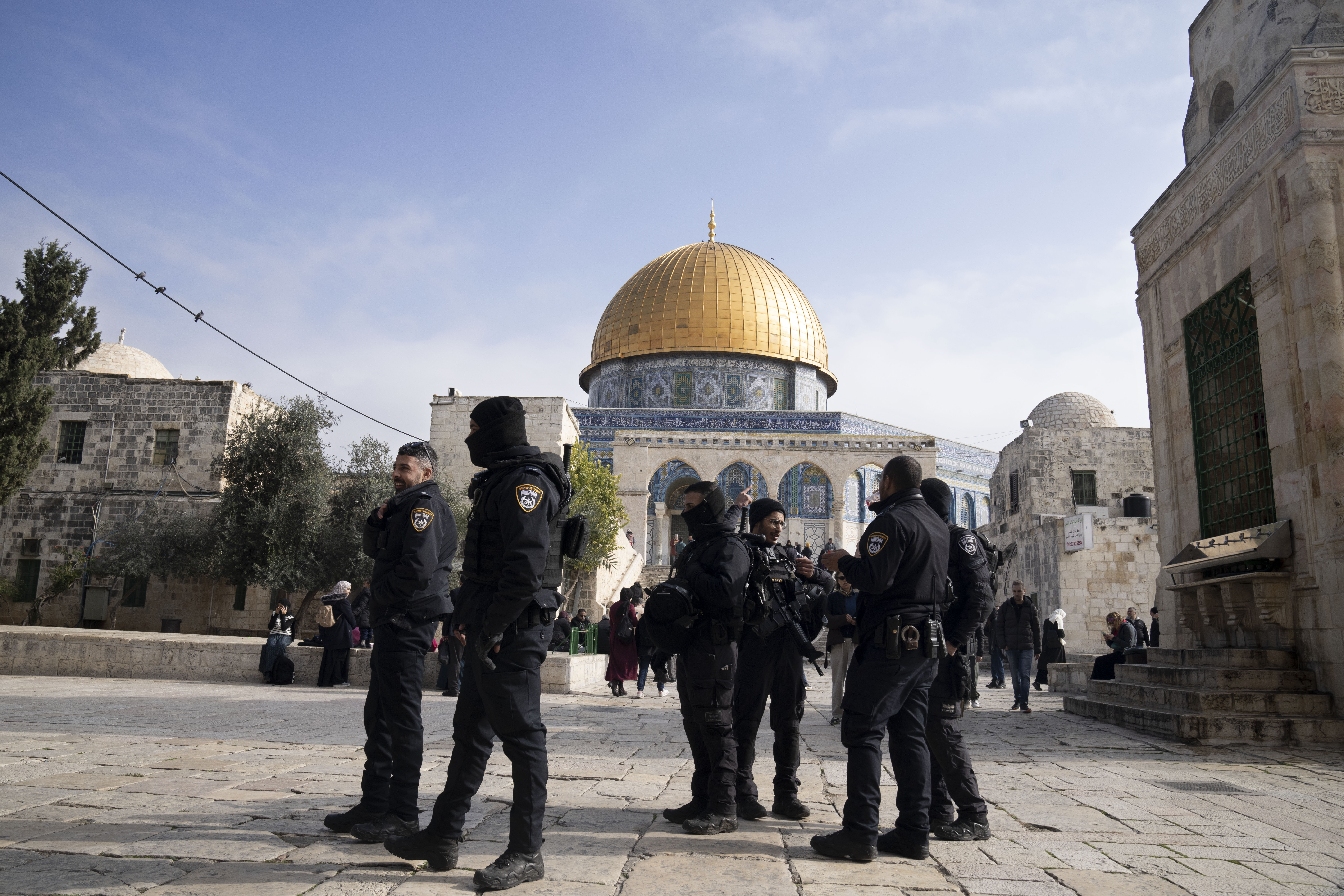 FILE - Israeli police secure the Al-Aqsa Mosque compound, known to Muslims as the Noble Sanctuary and to Jews as the Temple Mount, in the Old City of Jerusalem, Tuesday, Jan. 3, 2023. Itamar Ben-Gvir, an ultranationalist Israeli Cabinet minister, visited the flashpoint Jerusalem holy site Tuesday for the first time since taking office in Prime Minister Benjamin Netanyahu's new far-right government last week. The visit is seen by Palestinians as a provocation. (AP Photo/Maya Alleruzzo) 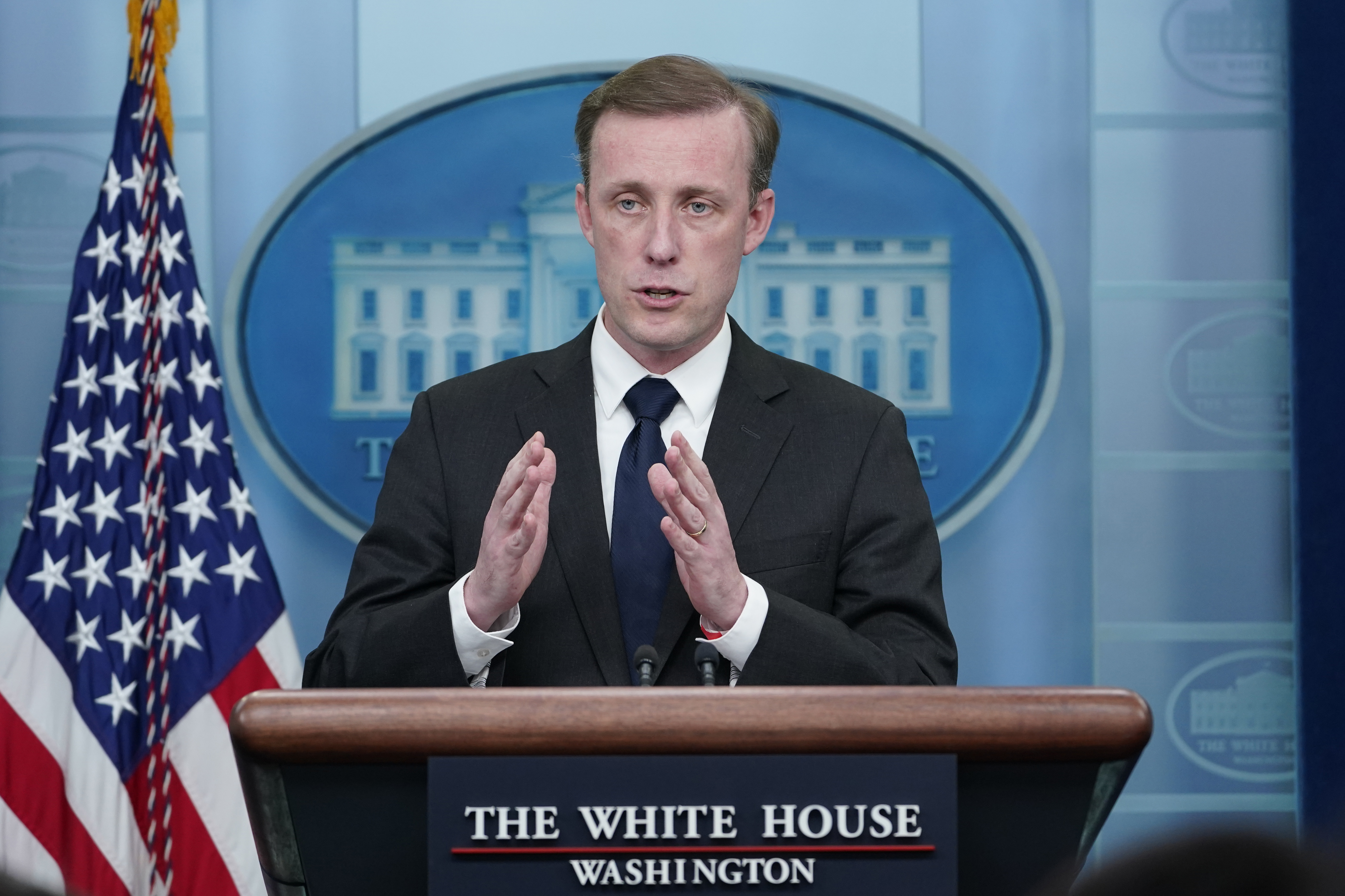 FILE - White House national security adviser Jake Sullivan speaks during the daily briefing at the White House in Washington, Dec. 12, 2022. President Joe Biden will send Sullivan to Israel in mid-January for talks. Sullivan's visit may be followed by other high-level trips to Israel, including by Secretary of State Antony Blinken. (AP Photo/Susan Walsh, File)