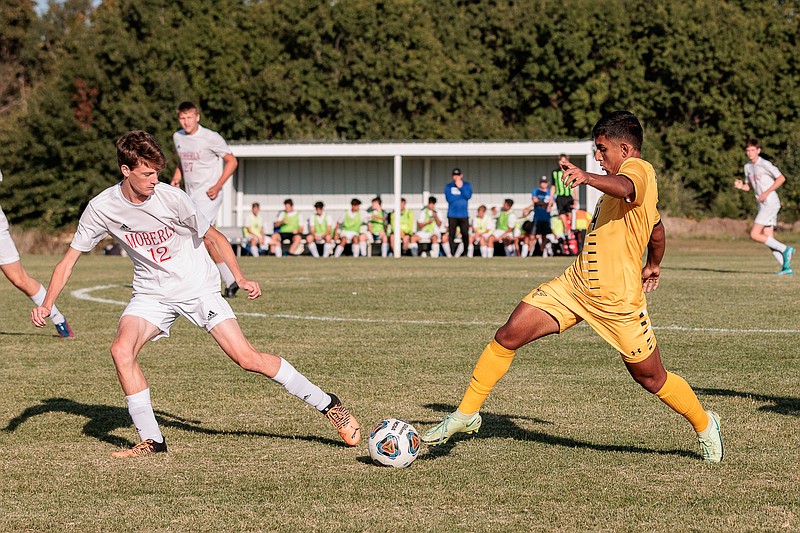 It was the Super Sam Gold Rush game for Fulton boys soccer, and the team in gold sure did rush the net for goals.

Fulton was led by Jayden Ayers, who was involved in six goals, assisting five and scoring one. Meanwhile, Bahir Sherzad scored a hat trick of tap-ins and senior Daniel Moak netted his first-ever goal for the Hornets.

For the first 12 minutes, Fulton kept working to get a goal while the Spartans did their best to defend them.

In the 13th minute, Ayers bombed down the left wing and then sent a pass to Luke Holland who was in a perfect attacking position to score Fulton's first goal -- he did just that.

Following the goal, Moberly was still on the back foot and tried to score on the counter but the Hornets were able to contain the few chances they had. Fulton was relentlessly pressing against the Spartans until the team got its second goal in the 29th minute.

That second goal was Ayers' lone shot he scored. Christian Mahoro assisted the score, setting Ayers up with an easy pass before he rushed toward the net for the goal.

Ayers was in charge of Fulton's attack throughout the first half, trying his best to convert or create chances.

The next goal -- scored by Sherzad -- was the second Ayers created. Sherzad got through Moberly's defense on the left side of the pitch and scored an easy goal with six minutes left in the half.

Right before halftime, Sherzad capitalized on another Ayers chance, though it wasn't an intended pass this time. With 42 seconds left, he scored off of Ayers' rebounded shot.

At halftime, the Hornets were up 4-0 thanks to their dominant attack.

"I really felt like it was real good team play," Fulton coach Joel Henley said. "It was just getting everybody involved and moving the ball around, passing the ball. And sometimes it's hard to break down a team that's playing five in the back on you. And so I thought they did a good job all around. I think we had more opportunities; just didn't get enough numbers in the box."

Not long after halftime, Moberly scored its only goal when Drake Briscoe scored from just outside the box off a Jordan Rasico assist. And it didn't take long for Fulton to add another after that.

Finishing off a hat trick, Sherzad scored another goal off a rebounded shot, which was put on goal by Josh Narancich this time.

"Bahir did really good," Henley said. "Somebody on the bench said he got the 'Ronaldo hat trick' tonight. Ronaldo likes to poach goals, and that's kind of what he did tonight. He was just there at the right place, at the right time, poaching goals.

"Honestly, if we can do that more often, I think we'll score more goals as a team. And I think he did a really good job with that tonight."

They may have been up 5-1 but the whole team was still looking for the next goal. Eventually, the Hornets found it.

Just like the previous score, Fulton scored from a rebounded shot. In this instance, there were two shots stopped before Moak slotted home the Hornets' sixth goal.

"That was big," Henley said. "I think guys we're looking for him. And then I think it's really big that he finished it, put it in. And it's an exciting thing for him and exciting for us to see another guy get on the scoresheet."

Bringing it back to the connection on their first goal, the Hornets' Holland bagged a brace after scoring from an Ayers assist.

"You always want success for them until they play you," Henley said. "And then you want their team to play well. But you want you still want to beat him because you still are competitive. We had some fun over on the sideline, even during the game. Have a little fun with the ref with each other. It was good to see him tonight. It's good to see that he's taking the team and really teaching them. And coaching them and moving them in the right direction."

Regardless of the result, Fulton's team did its part to help out, by partnering with the Super Sam Foundation. The foundation is a 501(c)3 pediatric cancer foundation with a mission focused on raising awareness, funding and support for families.

"This is the second year we've gotten to be involved with them," Henley said. "We're excited to really get to partner with them every year now, and work with them to help kick out childhood cancer. We're definitely around kids that have it, and we recognize that the fight is definitely necessary."

In one week, the Fulton team sold nearly 200 shirts and raised $1,134 for the Super Sam Foundation.

"I think it's another one that we need to go in, we need to have the mindset that we're going to go in and we're going to take care of business early," Henley said. "We really need to go there and just play our game. If we do what we did tonight, we move the ball and we bring maybe a little more intensity and a little more energy early, I think things will be a little bit quicker, a little bit faster for us. But we just need to keep building. We keep talking one game at a time. If we just keep going one game at a time, we're gonna be right where we want to be at the end of the season."