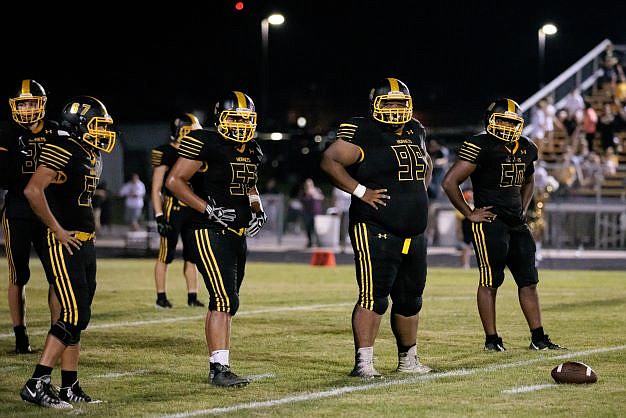 Fulton football's defense lines up for a snap against Hannibal on Sept. 16 at Robert E. Fisher Jr. Stadium in Fulton. (Courtesy/Shawley Photography)

On Friday, Fulton football will hope to get its offense back on track against a Moberly team that allows 28.5 points per game.

Before getting shutout by Hannibal last week, the Hornets' offense averaged 27 points per game in its two previous contests. If Fulton's offense can match that production, then it'll be a close matchup against the Spartans.

The Hornets' meeting with Moberly last season was a close game that saw Fulton lose 34-22 on the road. This season, Fulton has home-field advantage and Fulton coach Dana Chambers expects the game to be tight like last year.

The theme for Friday's game will be childhood cancer awareness. At the Fulton volleyball game against Mexico on Monday, the Hornets handed out yellow ribbons and the ticket proceeds from the match went to the Super Sam Foundation.