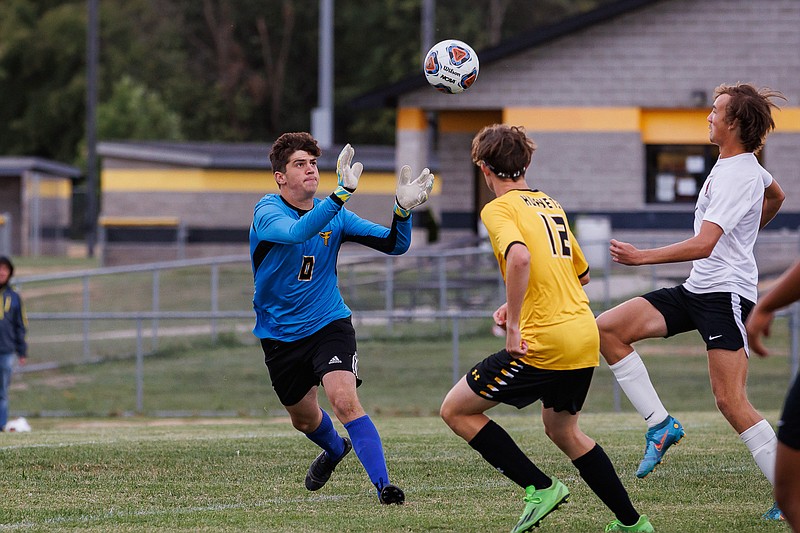 There were lots of screams and shouts from Fulton boys soccer fans -- and both coaches -- in a match full of tackles and yellow cards.

The Hornets fell 3-0 to the Pirates on a chilly and windy Thursday evening -- fitting for the first day of fall -- in Fulton.

Grant Avery did his best to keep the Hornets in the game, making four saves on seven attempts before getting injured in the second half. All three of the Pirates' goals were opportunities where Avery didn't have much of a chance to save them.

"The first goal, Grant took a foot in the chest on it," Fulton coach Joel Henley said. "...I always thought they're supposed to protect goalkeepers but not sure that was the case on that."

Looking for their second, the Pirates kept applying pressure on Fulton's defense, and the Hornets did their best to contain Hannibal's attack.

Fulton's defense took the ball away from Hannibal, creating its best scoring chance of the game with 22 minutes left in the first half. Dominick Tharp broke through the Pirates' defense and scored a goal, but it was ruled offside by the referee.

Before Hannibal scored its second and final goal of the half, Fulton had a couple of scoring chances with Josh Narancich's free kick and a Luke Holland shot in the run of play. Unfortunately for the Hornets, Pirates goalkeeper Parker Terrill stopped both opportunities.

With 2:30 left in the second half, Hannibal was awarded a penalty after a Fulton handball in the penalty area off a Pirates free kick. Colton Dryden converted the penalty, scoring to the left of the net while Avery dove right.

In the second half, the Hornets were getting into the attacking third more often than in the first 40 minutes. But most of the time, Hannibal's defenders outnumbered Fulton's attackers when they were close to goal.

"We actually talked at halftime about we've got to have more support in our attack," Henley said. "That we can't let the front four do it at all. That we've got to get holding mids up in it and we just struggled all night with that. I don't know if it's they're tired after a long game on Tuesday, or what it was. But we definitely struggled tonight. Maybe it's playing a team that's really good and a team that makes you have to work really hard."

For roughly the first 10 minutes of the second half, the Hornets continued to pressure the Pirates but Hannibal went back on the attack and scored its final goal.

On Graysen Crabill's free kick, Hannibal put a shot on goal that was punched out by Avery. Then for the second time, the Pirates scored off a saved shot; DaeShon Glasgow was the Hannibal player who found the net.

Following that goal, the match's physical play reached its peak as two (three for the match, Jayden Ayers picked up an injury earlier) Fulton players would be replaced due to injuries in the final 15 minutes.

The first of those two injuries occurred when a Hannibal player kicked Avery in the head while going for a goal. Hornets forward Tharp replaced Avery in goal.

Not long after that, Holland injured his foot on a hard tackle made by a Hannibal defender. The Pirates player received a yellow -- Fulton fans were shouting that it should have been a red.

"You saw by the number of yellow cards that it was obviously a physical game," Henley said. "I think it changes the way the game is played. It makes it more difficult. We're not a team that -- not that we won't play physical -- but not the way we want to play. We want to play where we're moving the ball and passing the ball. And so it makes it a little bit tougher on us, and I think they know that and so they continue to do it. They do it every year and so it's not something new tonight -- we struggled with it."

Hannibal received another yellow card with around 10 minutes left. Pirates coach Eric Hill was not happy with the call, which led to the referee handing him a yellow card for arguing about it.

Aside from the chippiness and yelling that ensued, Tharp's performance in net was another notable happening. In the final 15 minutes of the match, Tharp stopped both of Hannibal's shots on goal.

"He stepped in and did a great job," Henley said. "Probably going to have to do that for a while for us. Not sure how long we're gonna be without Avery, just depends on how things go the rest of the night. So, we're just going to expect that he's going to have to step up and continue to do what he did tonight. If he'll do that, then we'll be good to go."

It was Tharp's second appearance as a goalkeeper this season -- he stopped five shots on seven attempts in Fulton's 2-2 draw with Tolton in the Boonville Shootout Saturday. Tharp filled in for Avery that match since he was on National Guard duty.

When it was all said and done, the Pirates' attacking advantage was what decided the match. Fulton recorded four shots (two on goal) to Hannibal's 16 (nine).

"I've watched them on film, but I still feel sometimes it doesn't tell the truth," Henley said. "We'll see how it is. We are gonna have to try to recover tomorrow, getting back at it. Then, after that, we can just get the recovery done tomorrow and come back out. These three game weeks have been a little bit tough on us. And so hopefully we can come back and hopefully we'll get as many people available as I possibly can on Saturday. ...Have to make some adjustments based on who we have personnel-wise."