College students have a blast at the Brick Blast 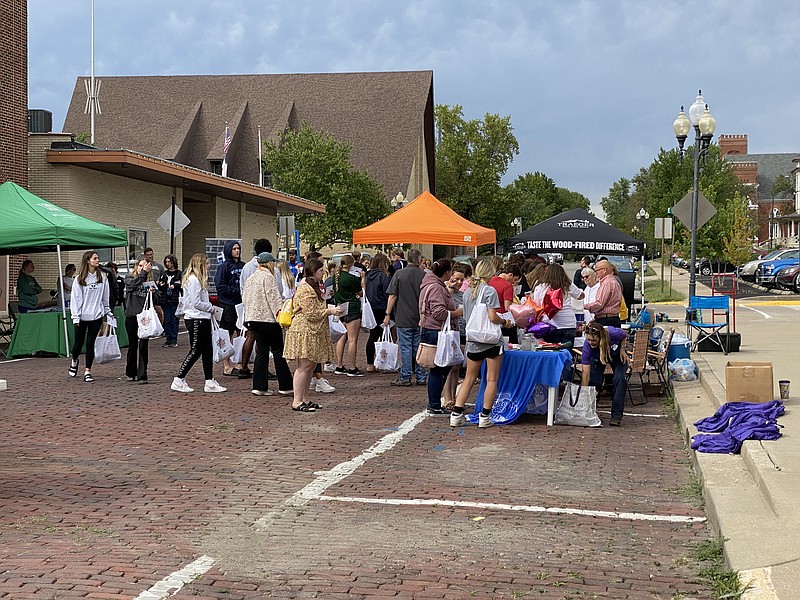 This event was hosted by both Westminster College and William Woods University. Previously, Brick Blast was only for students of the colleges. This was the first year faculty and staff of both schools were officially invited to attend.

The purpose of Brick Blast was to introduce students to the local businesses available to them in Fulton.

Sixth and Seventh streets were blocked for to traffic from 3-6 p.m. for the event.

A total of 37 businesses participated in the event. Businesses that were not within the Brick District were invited to participate as well. These businesses had boothss set up where they could interact with the students and give away free items.

Students were given a bag full of freebies and coupons for the local businesses. They were also given a Brick Blast passport, which could be filled out by visiting the listed participants and getting a stamp from them. Once completed, students could drop it off in a basket for either William Woods or Westminster to be entetered into raffles.

Students who attended were able to get free samples from local restaurants and freebies from stores. There were also raffles for those in attendance.

Kristina Bright, executive director of marketing and strategic communications at Westminster, was one of the organizers of this year's Brick Blast. This was the first year Brick Blast had involvement from the colleges for planning.

Bright said there were 226 students from Westminster and William Woods who registered for the event. Some students also showed up without registering. Bright said she was very pleased with the turnout, especially for her first time planning it.

It took around a month or to get Brick Blast organized, Bright said. She is excited to do the event again next year, as she has learned some things to implement and do differently.

Blaine McQuaid Pestle, client associate with Smith Moore, also helped organize this year's event. She helped get all the businesses involved. Pestle said they were hoping to get around 150 students to attend, so they are very happy with how many attended.

Pestle said she will continue to help with the event next year, as she feels it is very important for all the businesses to work together.

She thinks the Brick Blast event is important to introduce students new to Fulton about all the services and opportunities available here, without having to drive to Columbia. She also said the students and staff of the colleges are a big part of the community, so it is important they stay involved and informed.

Print Headline: College students have a blast at the Brick Blast