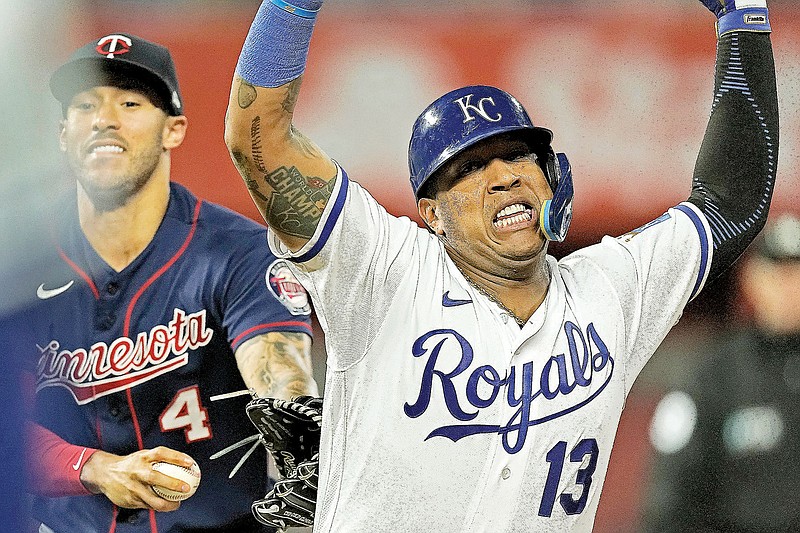 Salvador Perez of the Royals tries to avoid the tag by Twins shortstop Carlos Correa during the seventh inning of Wednesday night’s game at Kauffman Stadium in Kansas City. (Associated Press)

KANSAS CITY -- It was altogether fitting that on the day the Kansas City Royals fired Dayton Moore, they beat the fast-fading Minnesota Twins using the same blueprint that their longtime front office executive once used to build them into a winner.

Some timely hits, stellar defense in spacious Kauffman Stadium and a shutdown effort by the bullpen.

MJ Melendez homered for the second straight day, but otherwise the Royals had to scratch out just enough runs to support their relief corps, which pieced together five innings of two-hit ball in their 5-2 victory Wednesday night.

“You’ll always have stuff that comes up and today was one of those days, and the conversations we had -- you still have to play,” Royals manager Mike Matheny said. “Play the game really well in a way everybody would be proud of.”

Salvador Perez, one of Moore’s most successful signings, had three hits while driving in a run for the sixth straight game, and Bobby Witt Jr. and Edward Oliveras also drove in runs to give the Kansas City bullpen some breathing room.

Anthony Misiewicz (1-1) and three other relievers dazzled in support of Daniel Lynch, while Scott Barlow pitched around an error in the ninth for his second save in two nights and 23rd on the year.

It was the kind of job the Royals once saw out of relievers Kelvin Herrera, Wade Davis and Greg Holland, when the teams Moore put together were winning back-to-back American League pennants and the 2015 World Series title.

“It was just a really impressive job by the bullpen to shut things down,” Matheny said. “Good effort all the way around.”

Bailey Ober (1-3) allowed three runs on seven hits and a walk over five innings for Minnesota, which was in an A.L. Central race two weeks ago but has lost six of seven to begin an eight-game trip that’s dashed its playoff hopes.

“The runs are tough to come by right now and you just have to come up with a way,” Twins manager Rocco Baldelli said. “We might have one guy that comes out and has a good night, but we need more than that.”

The Royals opened the game the same way they finished the previous night: with production at the top of the order.

Melendez, who hit a two-run homer in the series opener, homered leading off the game for the third time this season, driving a 3-1 pitch an estimated 437 feet to center field. And after Witt reached on a base hit, Perez blooped an RBI double to right that was sneakily reminiscent of his two-out, go-ahead double on Tuesday night.

Minnesota got one back in the second on Matt Wallner’s base hit, and when the Royals answered on Oliveras’ two-out single in the third, the Twins again closed within a run thanks in part to a two-bag error by Vinnie Pasquantino.

That was it for the Twins, though, because the Kansas City bullpen was downright dominant.

Collin Snider worked around a two-on, no-out jam in the fifth. Misiewicz retired four of the five he faced in the sixth and seventh. Dylan Coleman handled the rest of the seventh and the first two outs of the eighth. And Amir Garrett finished that one off before Barlow wrapped up the Twins’ 13th loss in their last 16 games.

“We have some guys that have had to battle through some tired arms,” Matheny said. “We’re trying to put them in position where they can pick each other up and they’re doing a good job of it.”

Notes: Moore said farewell to the Royals during brief remarks at Kauffman Stadium earlier Wednesday and spent an emotional few minutes visiting with players in the clubhouse. Many of them acknowledged the somberness of the moment. Moore had led the organization for the past 16 years as general manager and president of baseball operations. “He’s such a great guy. A great person,” Perez said. “I just old him, ‘Thank you for everything.’ I love him.” … Perez played in his 1,245th game, tying Alcides Escobar and Fred Patek for eighth most in Royals history, and his three hits Wednesday night tied a season high. … RHP Josh Winder (4-4, 4.17 ERA) will face Kansas City for the first time in the final game of the road trip today for Minnesota. Royals RHP Jonathan Heasley (3-8, 5.09) will try to build on 6⅔ scoreless innings in his last start at Boston.