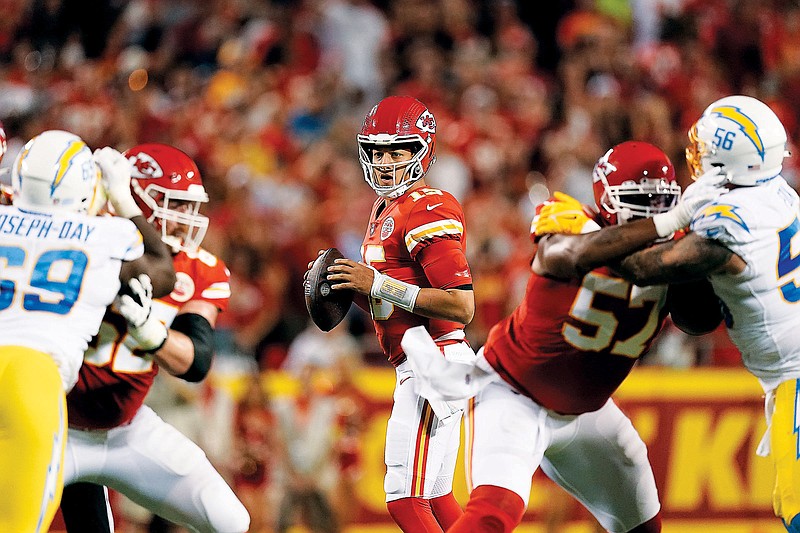 Chiefs quarterback Patrick Mahomes drops back to pass during the first half of last Thursday night’s game against the Chargers at Arrowhead Stadium in Kansas City. (Associated Press)

KANSAS CITY -- The Kansas City Chiefs and the Los Angeles Chargers were locked in a tie game early in the fourth quarter last Thursday, and Kansas City was facing fourth-and-goal with an opportunity to take its first lead of the game.

Rather than go for it, Chiefs coach Andy Reid sent in his field-goal unit.

Everything worked out in the end: The Chiefs took the lead on the chip-shot by fill-in kicker Matt Ammendola, rookie cornerback Jaylen Watson returned an interception 99 yards for a touchdown on the ensuing drive, and Kansas City held on for a 27-24 victory in an important early season AFC West showdown.

Yet the conservative decision on the goal line left some head scratching inside Arrowhead Stadium, unless you consider what had transpired in the first three quarters.

One of the league’s prolific offenses, led by quarterback Patrick Mahomes, had faced third-and-short situations five times and converted just once.

“We can do better in that area,” Reid acknowledged ahead of a visit Sunday to Indianapolis.

The question is how.

The Chiefs spent plenty of time working on short-yardage scenarios during training camp in St. Joseph and they dedicate time during practice each Thursday to them.

So it’s not as if Reid, whose penchant for throwing the ball all over the field is well known, has neglected a situation that seemingly demands old-school, smash-mouth football.

Perhaps it’s an attitude thing. Or poor play calls. Or the defense simply got ‘em on those plays.

“You try to see what went wrong, first of all,” Reid said, “whether it’s the call -- whether I sent in the wrong thing at the wrong time -- or there’s a mistake somewhere. We had a couple of mistakes in there. And then one of them where we didn’t have a mistake, the defense still had pretty good leverage on it.”

The only third-and-short the Chiefs converted last Sunday was their first, and they did it in the most blasé way possible, running 5-foot-11, 242-pound fullback Michael Burton up the middle for a first down.

It’s when the Chiefs got a little more exotic that things went haywire.

Isiah Pacheco was stopped on the next opportunity. Mahomes threw an incompletion on the next. And then Mahomes threw an underneath shovel-pass to Travis Kelce on third-and-goal — the play Reid referred to that was executed correctly but still failed, leading to the go-ahead field goal on fourth-and-goal.

Why not just run a tried-and-true sneak for those first downs?

That goes back to 2019 and a game in Denver, when Mahomes dislocated his knee cap plowing into the pile. Reid has been shooting down his quarterback whenever Mahomes asks to sneak the ball ever since.

“The hardest I’ve ever lobbied for it was the playoffs: We’re here now, I want that first down,” Mahomes said. “I’ve only technically not got (the conversion) one time, and I still think I was in the end zone against the Chargers a couple of years back. I’m still pretty good at the quarterback sneak. I’ll keep that on his radar.”

What makes the Chiefs’ failures on third-and-short even more vexing is the fact they averaged nearly 8 yards per play on first down. Some of that was inflated by a 52-yard run by Clyde Edwards-Helaire late in the game, but removing that big play, the Chiefs still averaged about 5.3 yards on every first-down snap.

Yet the Chiefs couldn’t get a yard or two when it would have kept a drive alive.

In fact, they were so woeful on third-and-short Sunday they would have been better off in third-and-long: Whereas they were 1-for-5 in those situations, they were 4-for-8 when they needed to gain at least 4 yards.

That’s more in line with how the Chiefs traditionally fare on third down. They were far-and-away the best in the league last year, converting at a 53.1 percent clip, and are still in the top 10 this season at 45 percent despite their short-yardage woes.

Notes: K Harrison Butker (sprained ankle) remained out of practice Wednesday, raising expectations that Ammendola will kick again Sunday in Indianapolis. … DE Mike Danna (calf) also did not practice Wednesday. … CB Jaylen Watson was AFC defensive player of the week after his 99-yard interception return for a touchdown against the Chargers. “I’ve just muted my phone the past five days,” he said. … The Chiefs signed DE Benton Whitley from the Rams practice squad.