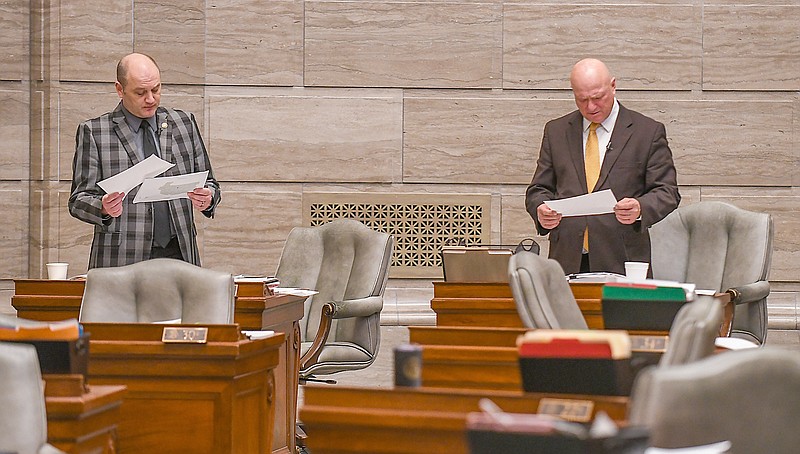 A pair of agriculture bills before the Missouri General Assembly contain provisions outside the governor's call for the special session, but the scope may be expanding.

The bills -- SB 8 in the Senate and HB 3 in the House of Representatives -- contain agricultural tax credits Gov. Mike Parson asked for in his special session call, as well as provisions related to land surveys, soybean producers assessments, commercial log trucking and anhydrous ammonia regulations.

During special sessions, lawmakers are limited to only subjects the governor puts in his call for the session, according to the Missouri Constitution. The governor can expand the scope of the session with a special message after the General Assembly has convened.

Parson said Tuesday morning he wouldn't expand the scope of the session to include the four provisions.

"The call is the call," Parson told the News Tribune on Tuesday morning. "We've been straightforward about this for several months that we've talked about this. We made the call narrow, and it needs to be in the scope of the call."

By Tuesday afternoon, his position had seemingly moved.

"Now that the bill is separated, I think it's changed a little bit," said Kelli Jones, a spokeswoman for the governor's office. Jones said she could not provide additional information on the governor's position early Tuesday evening because he was meeting with legislators.

When calling lawmakers back to the Capital City, Parson said he wanted the tax cuts and agricultural tax credits to be in a single bill. Legislators have scrapped that idea in favor of separate bills.

Hoskins said he discussed adding the provisions to SB 8 with Parson and he was supportive.

The four provisions were part of HB 1720, the agriculture bill Parson vetoed in the spring because it set agricultural tax credits to end after two years. Upon vetoing, Parson said he would call a special session to extend the tax credits sunsets to six years.

His call did not include language around land surveys, soybean producers assessments, commercial log trucking or anhydrous ammonia regulations.

Senate leadership Tuesday shut down another attempt to add an amendment outside the scope of the governor's call.

After the amendment Hoskins offered on SB 8, Sen. Rick Brattin, R-Harrisonville, offered another to prevent foreign businesses from accessing the tax credits.

But Senate leadership ruled the amendment out of order because it didn't fall within the scope of the governor's call.

After the ruling came down, Sen. Bob Onder, R-Lake St. Louis, said Senate leadership has allowed the governor to micromanage the session through the call. He said Senate traditions were allowed to override the Missouri Constitution.

No senators challenged the bill as being out of order, Senate President Pro Tem Dave Schatz responded.

The two bills now before the General Assembly are identical.