Missouri shows good and bad in win against Abilene Christian 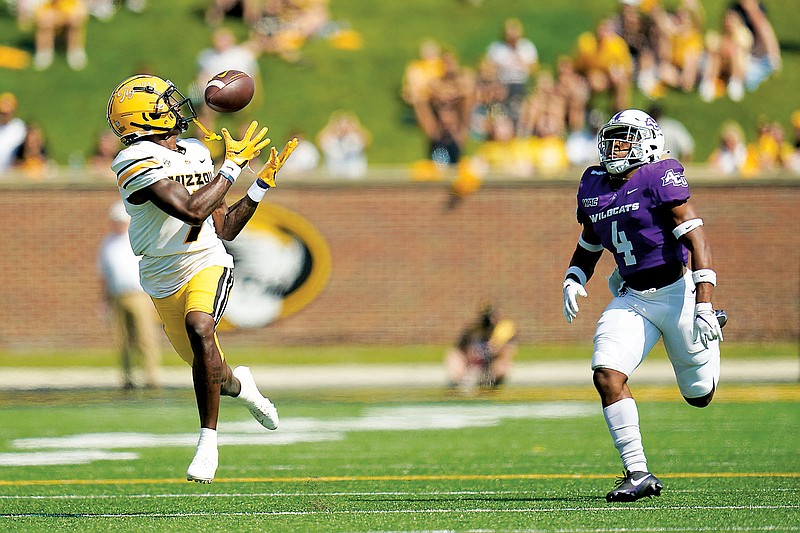 COLUMBIA -- Missouri played its get-right game and got right. Kind of.

The Tigers beat the Abilene Christian Wildcats 34-17 on Saturday at Faurot Field to rebound from a 40-12 loss to Kansas State last week.

“From a team perspective, I thought our defense played really well, specifically in the third quarter forcing those two turnovers,” Missouri coach Eli Drinkwitz said. “Offensively, we’re still a work in progress. We can’t get behind the chains with penalties. And those third and shorts in the first half really snuck up on us.”

But issues arose in telling ways.

”We’ve gotta go back and look and see who our best five guys are to be honest,” Drinkwitz said of the Tigers’ struggles with penalties and protection on the offensive line. “We can’t hold. We put a couple of guys in and then they got holding penalties. We’ve gotta go back in and figure out what our best five is. … Penalties and poor execution doesn’t win in this league.”

The running back by committee ended with fine numbers, but nobody separated. Cody Schrader had 10 carries for 54 yards, while Nathaniel Peat had six tries for 33 yards.

“No, not really,” Drinkwitz said of any separation in the running back room. “That was kind of by design, we wanted to start Nate (Peat) and let him get a couple of carries, then get a change of pace with Elijah. If Nate was pounding them, then kind of our first and third, Cody Schrader, would be our same style. There was some good and bad, kind of hard to assess with the five holding penalties.”

Dominic Lovett shone with seven catches for 132 yards and two touchdowns, including a 79-yarder in the first quarter, but Missouri was able to sustain only one scoring drive of more than five minutes.

“That’s really three weeks in a row that he’s played pretty well,” Drinkwitz said of Lovett. “The ball got to him a couple of times in designed plays and then obviously we had one late that we missed that would have been another one. He’s got great speed, we’ve been able to settle him in in the slot and he just continues to get better and better.”

The Tigers had two scoring drives in the first half and four punts along with a drive ended at halftime. The offense looked better in the second half, scoring on three of eight drives with two more ending in missed field goals, but the offensive troubles never really went away.

Burden started the Tigers’ day with a 78-yard punt return touchdown to go ahead 7-0 with 13:43 left in the first quarter.

“When Luther returned that touchdown, the crowd was into it, the students were really loud.” Drinkwitz said.

“He didn’t field the punts, but he picked them up off the ground pretty good.”

Then the Tigers went 20 game minutes without a touchdown.

Harrison Mevis connect on the first field goal of his 2-for-4 day, then Cook connected with Peat for a 6-yard score to end the touchdown drought with 10:47 left in the third.

Lovett caught a 13-yard pass from Cook for his second score with 22 seconds left in the third, then Mevis hit a 52-yarder with 3:11 left in the game.

Even Missouri’s punting unit struggled with starter Sean Koetting launching the first three punts of the day for an average of 30.3 yards, highlighted by a kick setting up the Wildcats at their own 1 after a fair catch, then getting replaced by Jack Stonehouse who kicked twice for an average of 50 yards.

“Positions are not guaranteed,” Drinkwitz said. “If you’re not performing at the level that you have to perform, we’ve got a lot of good players on this roster and they deserve the opportunity to display to us that they have the ability to do it. The competition was really close in fall camp and we just felt like after the first three punts, it wasn’t consistent enough for us not to let Jack have his opportunity and he made the most of it.”

Drinkwitz said Missouri (2-1) has work to do as it prepares to start SEC play on the road at Auburn at 11 a.m. Saturday.

“It’s gonna have to do everything with us,” Drinkwitz said. “After watching this performance today, the focus is gonna be all about the Mizzou Tigers. How do we execute? How do we not have self-inflicted wounds? How do we take care of the football? How do we tackle a lot better? I didn’t think we tackled particularly well in the first half. … It’s about how do we improve, how do we focus on us and how do we focus on the things we can control.”