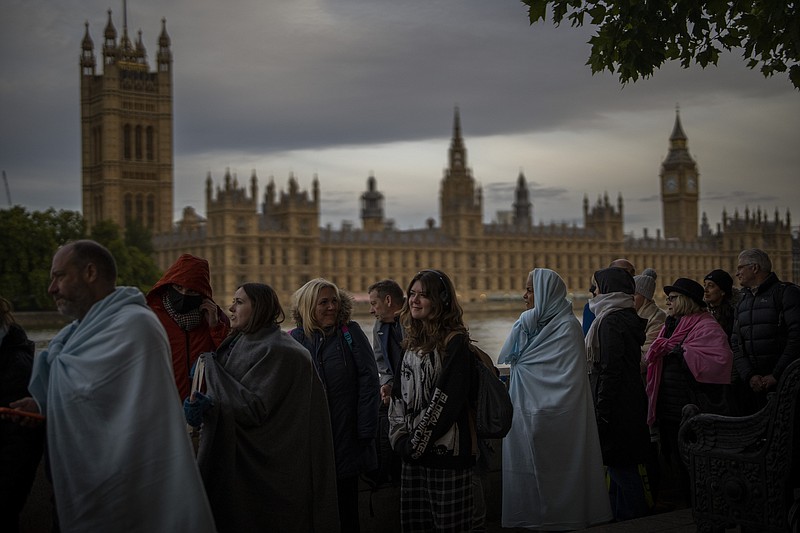 People queue to pay their respects to the late Queen Elizabeth II during the Lying-in State, outside Westminster Hall in London, Sunday, Sept. 18, 2022. Queen Elizabeth II, Britain's longest-reigning monarch and a rock of stability across much of a turbulent century, died Thursday Sept. 8, 2022, after 70 years on the throne. She was 96. (AP Photo/Emilio Morenatti)

LONDON (AP) -- U.S. President Joe Biden paid his respects at Queen Elizabeth II's coffin on Sunday as thousands of police, hundreds of British troops and an army of officials made final preparations for the queen's state funeral -- a spectacular display of national mourning that will also be the biggest gathering of world leaders for years.

People across Britain paused for a minute of silence at 8 p.m. in memory of the only monarch most have ever known. At Westminster Hall, where the queen is lying in state, the constant stream of mourners paused for 60 seconds as people observed the minute of reflection in deep silence.

In Windsor, where the queen will be laid to rest this evening after her funeral at Westminster Abbey, rain began to fall as the crowd fell silent for the moment of reflection. Some have set up small camps and chairs outside Windsor Castle, with plans to spend the night there to reserve the best spots to view the queen's coffin when it arrives.

"Well, it's just one night and day of our lives. Elizabeth gave us -- you know -- 70 years. So the rest of it is not a lot to ask, is it?" said Fred Sweeney, 52, who kitted out his spot with two Union flags on large flag poles.

Biden and first lady Jill Biden were among thousands of mourners -- from locals and tourists to royals and world leaders -- to pay their respects. The president made the sign of the cross and put his hand to his heart as he stood quietly near the casket in the ornate 900-year-old hall with his wife and U.S. Ambassador Jane Hartley.

Biden then signed the official condolence book and attended a reception Sunday at Buckingham Palace hosted by King Charles III. He is one of 500 world leaders and royals invited to the queen's state funeral Monday, along with hundreds of dignitaries, politicians, military veterans and British charity workers.

Biden called Queen Elizabeth II "decent" and "honorable" and "all about service" as he signed the condolence book, saying his heart went out to the royal family.

"Queen Elizabeth lived her life for the people," Jill Biden wrote in a book for spouses and ambassadors. "She served with wisdom and grace. We will never forget her warmth, kindness and the conversations we shared."

One no-show will be Saudi Crown Prince Mohammed bin Salman, whose invitation drew criticism from human rights groups because of the killing of journalist Jamal Khashoggi inside the Saudi consulate in Istanbul in 2018. Saudi Arabia is expected to be represented by another royal, Prince Turki bin Mohammed.

As the dignitaries poured in, hundreds hoping to view the queen's coffin prepared to spend the night outside in the longest queue many have ever seen. Authorities closed the miles-long queue late Sunday so everyone in the line can file past the coffin before Monday morning, when it will be taken to Westminster Abbey for the queen's funeral.

Family by family, thousands of people kept joining the line around the clock, braving chilly overnight temperatures and waits of up to 17 hours in a queue that stretched for more than 5 miles.

Lauren Wilson, 36, was in the much-shorter queue for people with mobility issues. She said she wanted to experience in person the coffin lying in state.

"The world is in such a weird place and then this happened. It feels more momentous," she said.

She worried that the pageantry surrounding Elizabeth's death deprives the queen's relatives of the ability to come to terms with their loss.

"The family are not allowed to grieve. I find it quite heartbreaking," she said.

The queen's eight grandchildren, led by heir to the throne Prince William, circled the coffin and stood with their heads bowed during a silent vigil on Saturday evening.

Among the foreign leaders in London was New Zealand Prime Minister Jacinda Ardern, who told the BBC she was humbled to represent her nation at the funeral and to witness the national outpouring of grief and respect for the late queen.

"The thing that I will take away from this period is just the beauty of the public's response, the kindness that you see from members of the public, the patience, the camaraderie. That has been, for me, the most moving tribute of all, has been the public response of the British people," she said.

Monday has been declared a public holiday in honor of Elizabeth, who died Sept. 8 at 96 after 70 years on the throne. Her funeral will be broadcast live to over 200 countries and territories worldwide and screened to crowds in parks and public spaces across the country.

Police officers from around the country will be on duty as part of the biggest one-day policing operation in London's history.

Camilla, the queen consort, paid tribute to her mother-in-law in a video message, saying the monarch "carved her own role" as a "solitary woman" on a world stage dominated by men.

"I will always remember her smile. That smile is unforgettable," said Camilla, who is married to Charles.

Ukraine's first lady, Olena Zelenska, was also among mourners paying respects to the queen's coffin. British royal officials said Zelenska met with Catherine, the Princess of Wales, at Buckingham Palace on Sunday afternoon. They did not release further details. The British government has been among the strongest supporters of Ukraine since it was invaded by Russia in February.

William stood with his head bowed at the head of the coffin and Harry at the foot. Both princes, who are military veterans, were in uniform. The crowd kept slowly, silently filing past.

"You could see that they were thinking hard about their grandmother, the queen," said Ian Mockett, a civil engineer from Oxford in southern England. "It was good to see them all together as a set of grandchildren, given the things that have happened over the last few years."

The lying-in-state continues until early Monday morning, when the queen's coffin will be moved on a gun carriage pulled by 142 Royal Navy sailors to nearby Westminster Abbey for the funeral, the finale of 10 days of national mourning for Britain's longest-reigning monarch.

After the service Monday at the abbey, the late queen's coffin will be transported through the historic heart of London on the state gun carriage. It will then be taken in a hearse to Windsor, where the queen will be interred alongside her late husband, Prince Philip, who died last year at 99.

"I feel so privileged to be a local resident of Windsor," she said. "I just wanted to pay my respects." 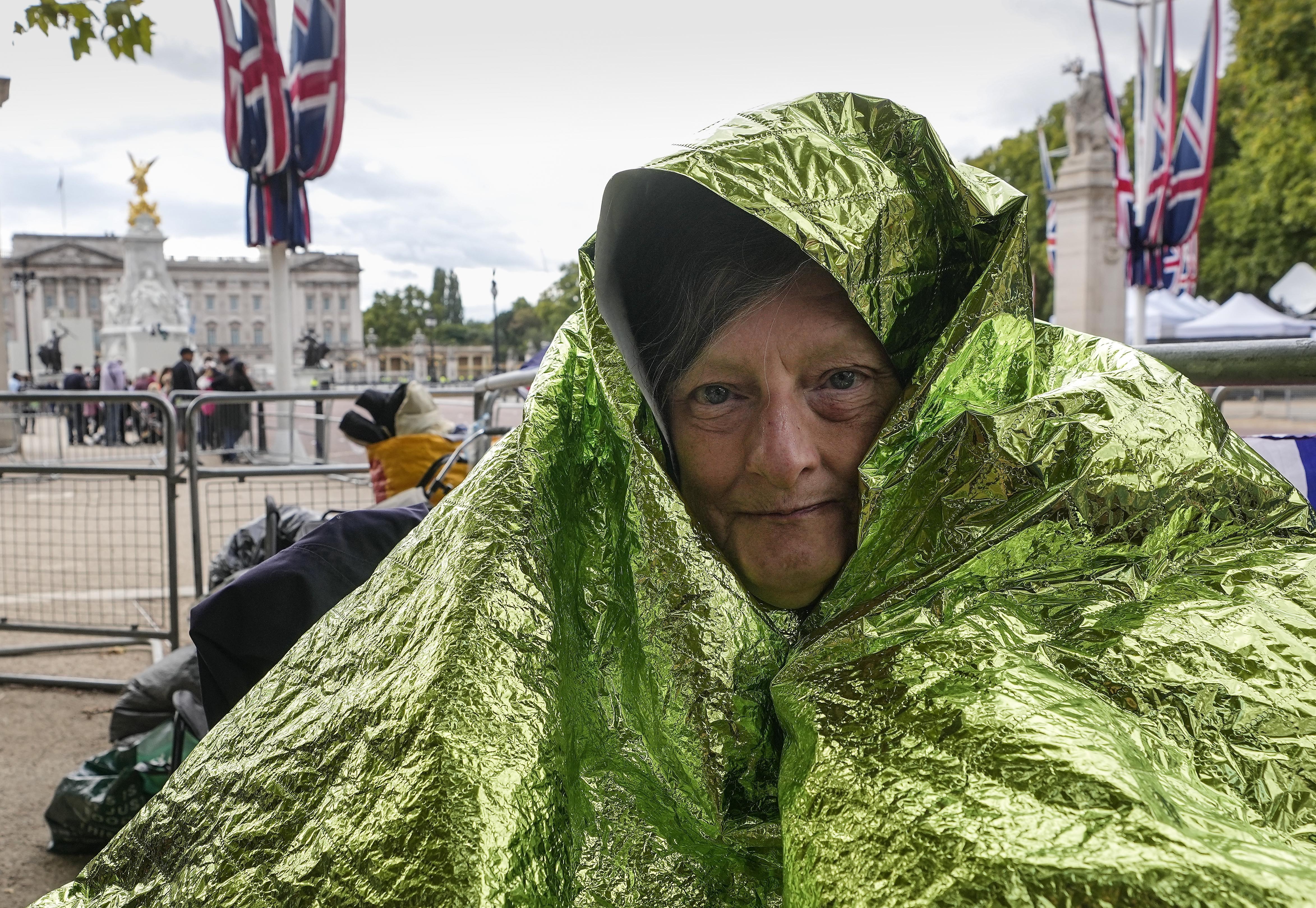 Caryll Foster keeps herself warm with foil as she will stay overnight to be in the first row for the Queen's funeral at the mall in front of Buckingham Palace in London, England, Sunday, Sept. 18, 2022. The funeral of Queen Elizabeth II, Britain's longest-reigning monarch, takes place on Monday. (AP Photo/Martin Meissner) 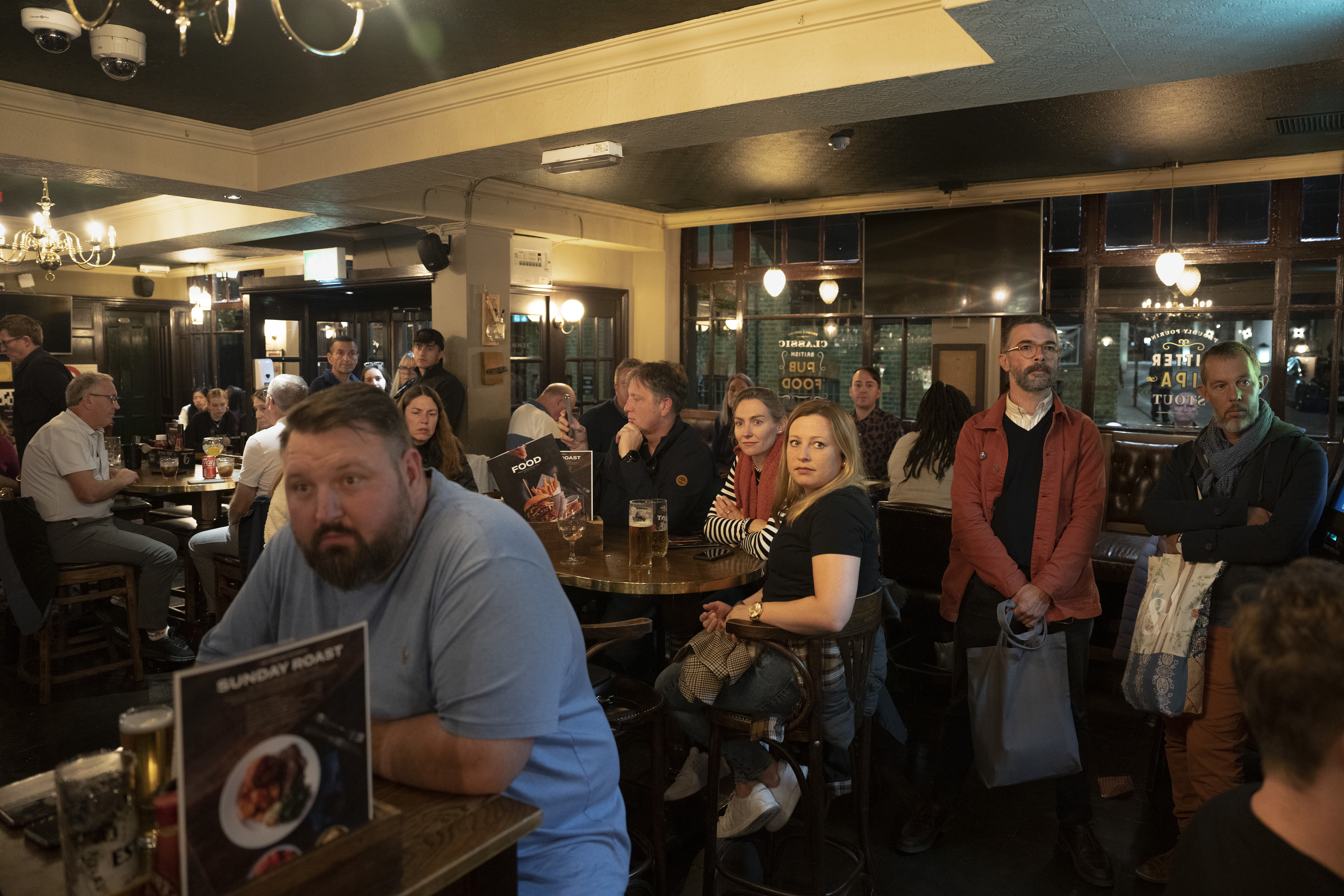 People observe a "National moment of reflection" in honour of the late Queen Elizabeth, the day before her funeral, in a pub in central London, Sunday Sept. 18, 2022 (AP Photo/Emilio Morenatti) 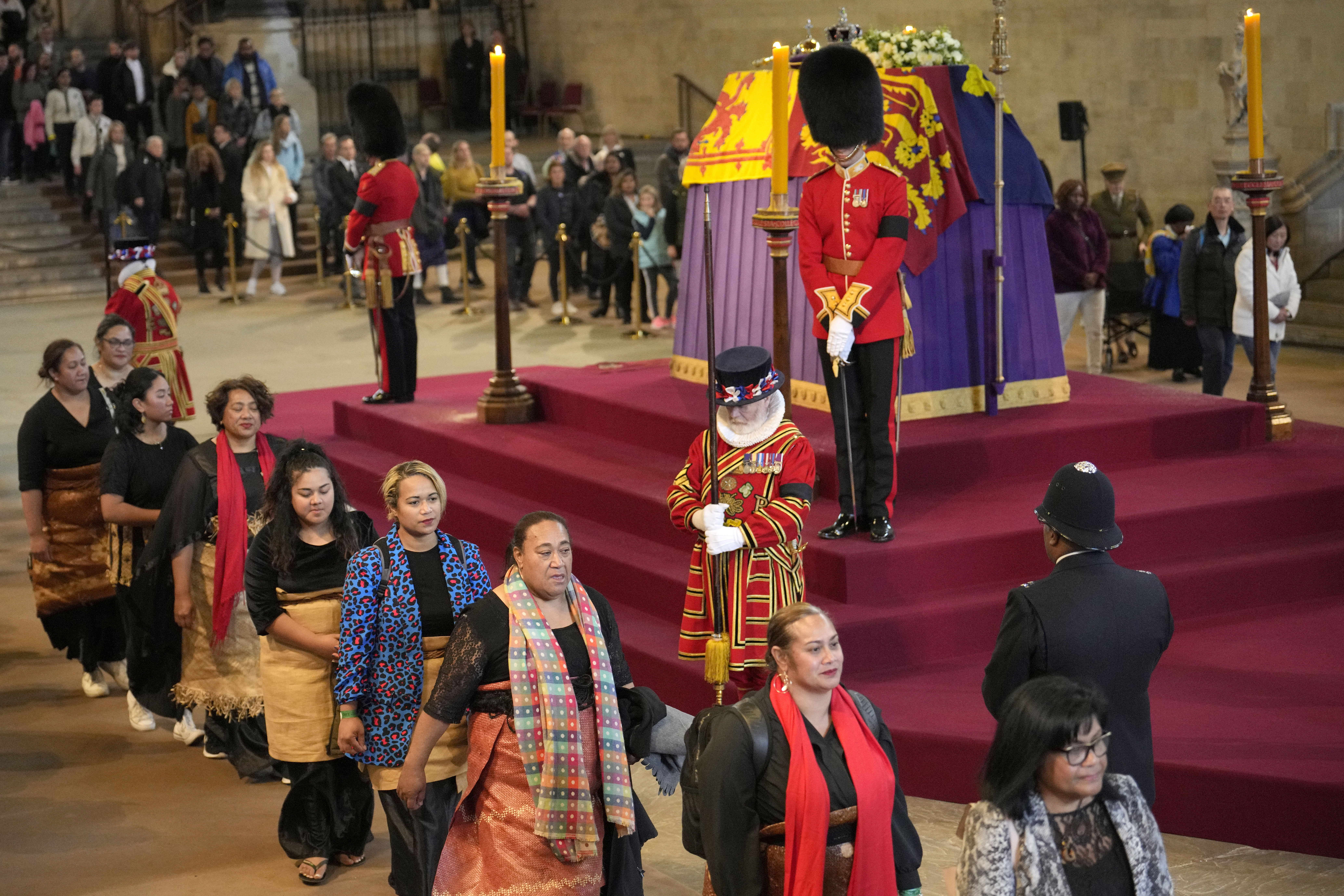 Members of the public file past the coffin of Queen Elizabeth II, draped in the Royal Standard with the Imperial State Crown and the Sovereign's orb and sceptre, lying in state on the catafalque in Westminster Hall, at the Palace of Westminster, in London, Sunday, Sept. 18, 2022, ahead of her funeral on Monday. (AP Photo/Vadim Ghirda, pool) 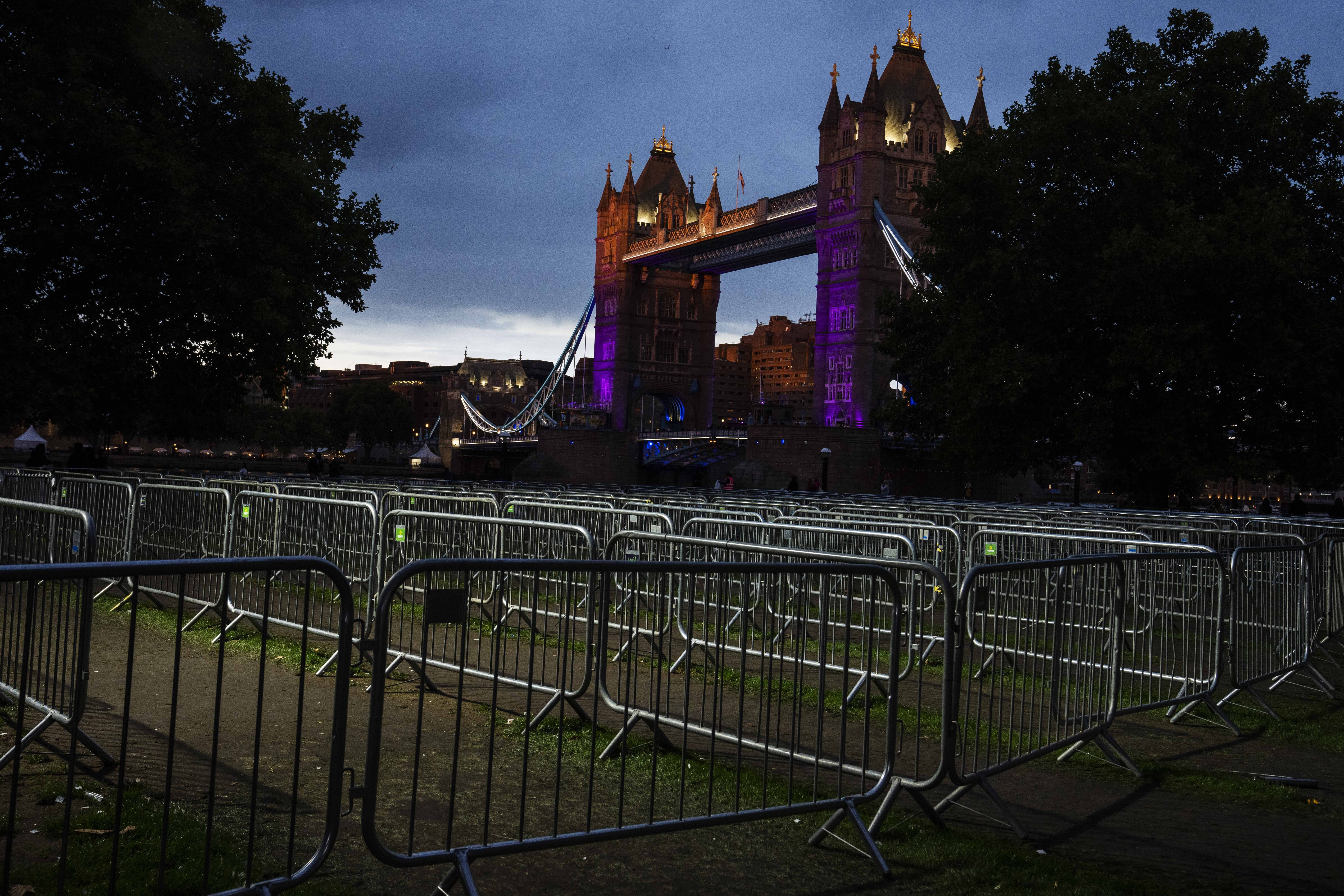 Empty barriers, now closed, set up for people to queue to pay their respects to the late Queen Elizabeth II during the Lying-in State, near Potters Fields park in London, Sunday, Sept. 18, 2022. The Queen's funeral will take place on Monday Sept. 19. (AP Photo/Nariman El-Mofty) 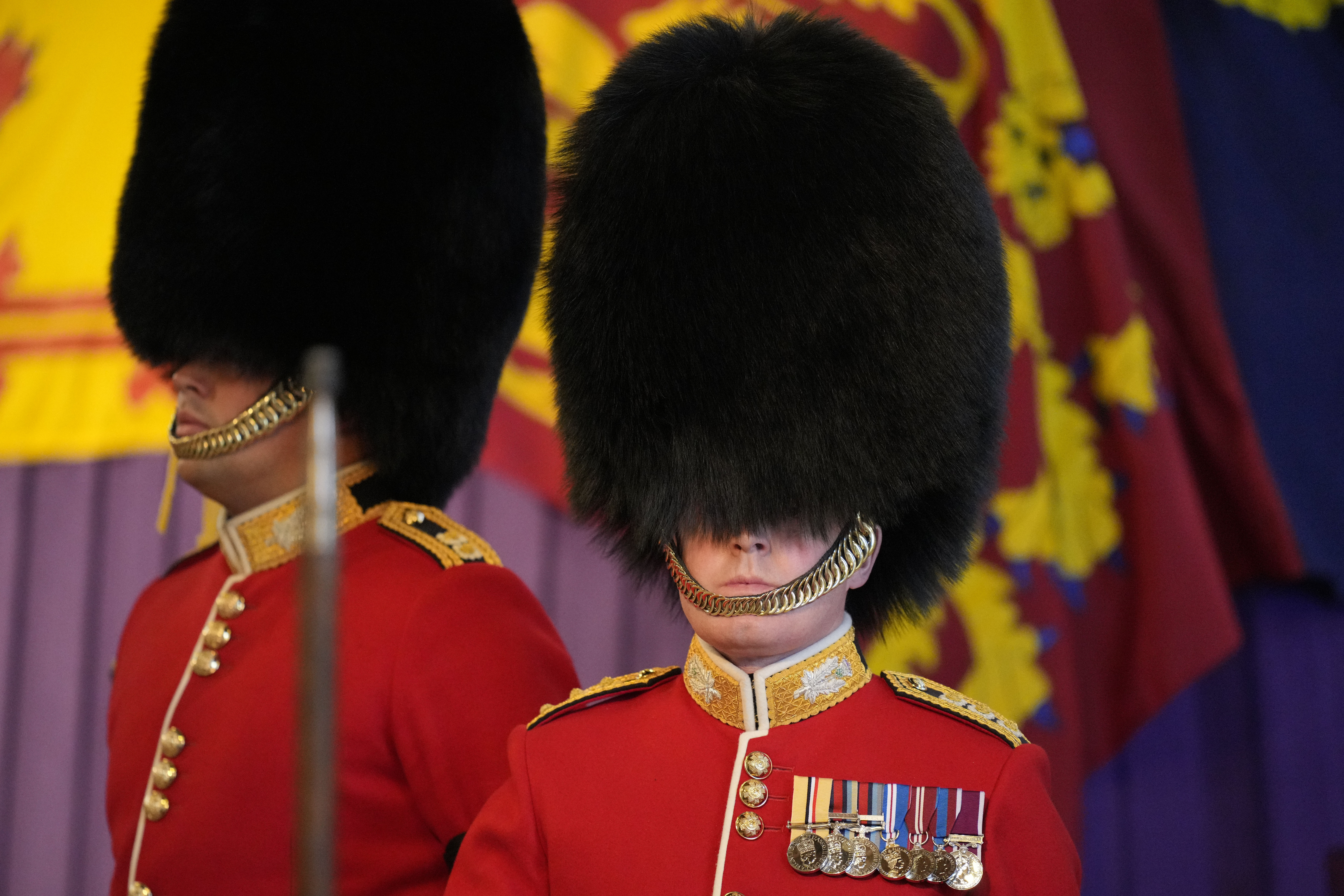 Guardsmen stand around the coffin of Queen Elizabeth II, Lying in State inside Westminster Hall, at the Palace of Westminster, in London, Sunday, Sept. 18, 2022, ahead of her funeral on Monday. (AP Photo/Vadim Ghirda, pool) 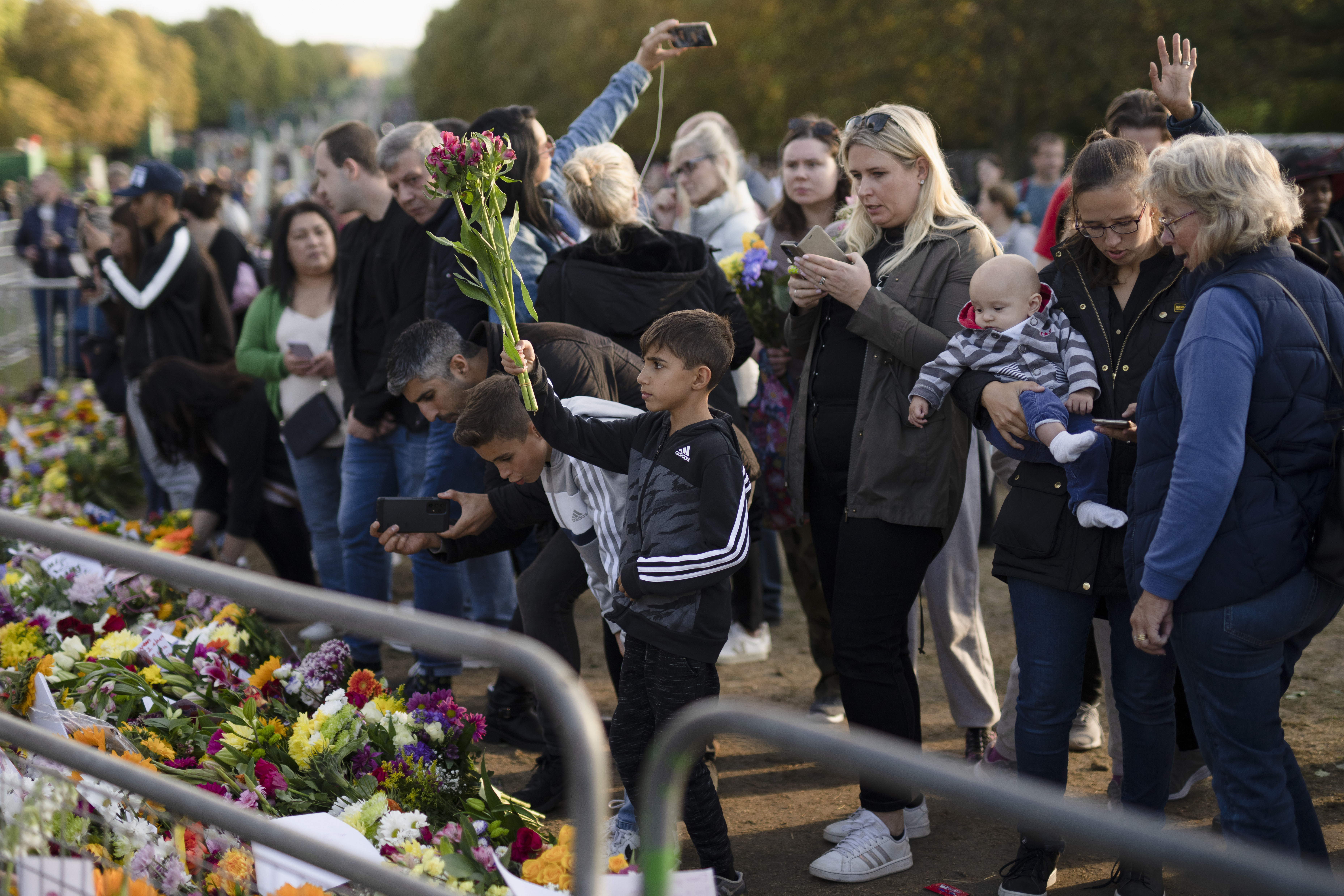 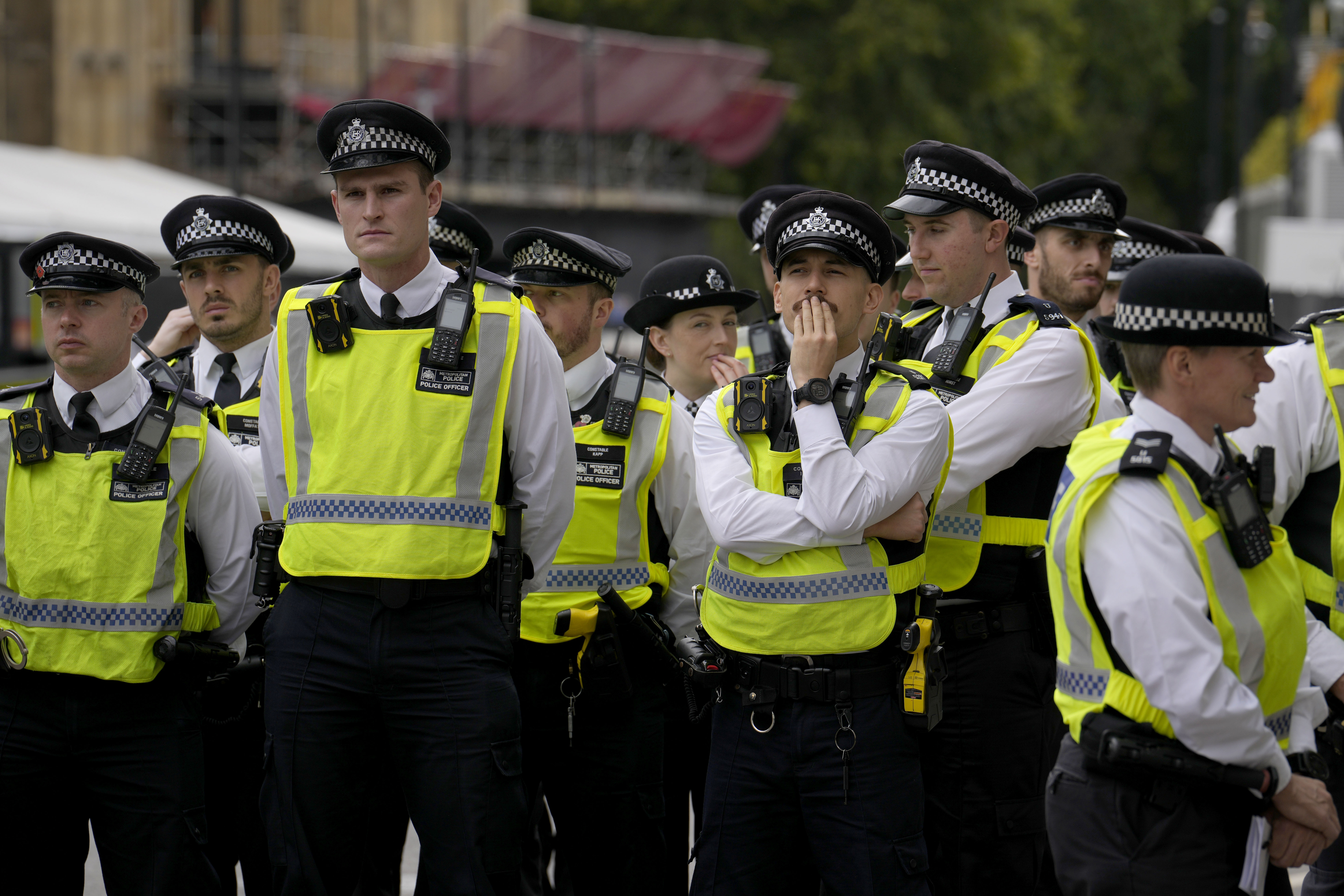 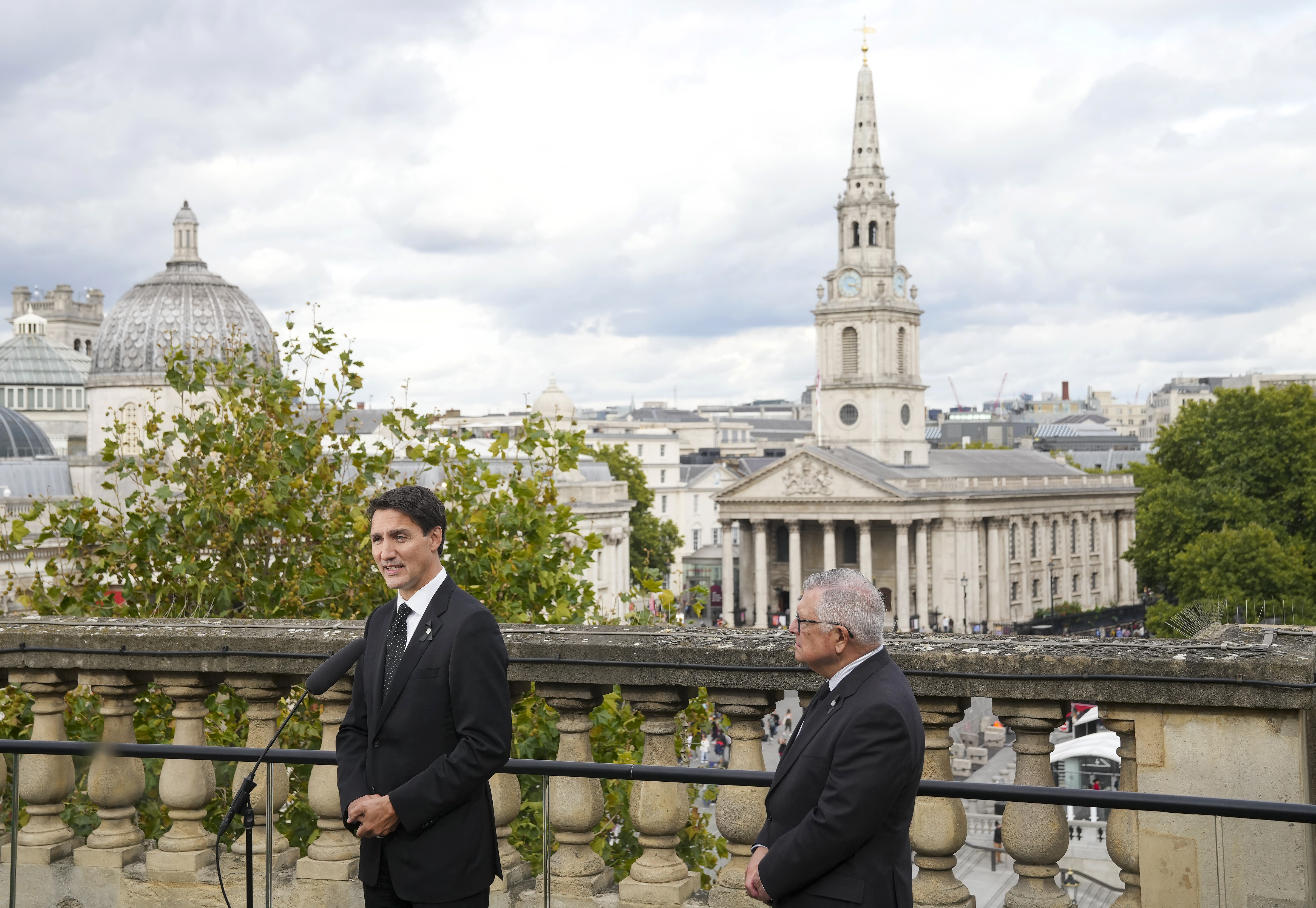 Canadian Prime Minister Justin Trudeau, left, speaks with the Canadian media at Canada House after visiting 10 Downing Street to meet with Britain's Prime Minister Liz Truss in London, Sunday, Sept. 18, 2022. Trudeau met his British counterpart and other world leaders in London on Sunday, as talk of the economy and the war in Ukraine took their place alongside the sombre preparations for Queen Elizabeth II's funeral. (Nathan Denette/The Canadian Press via AP) 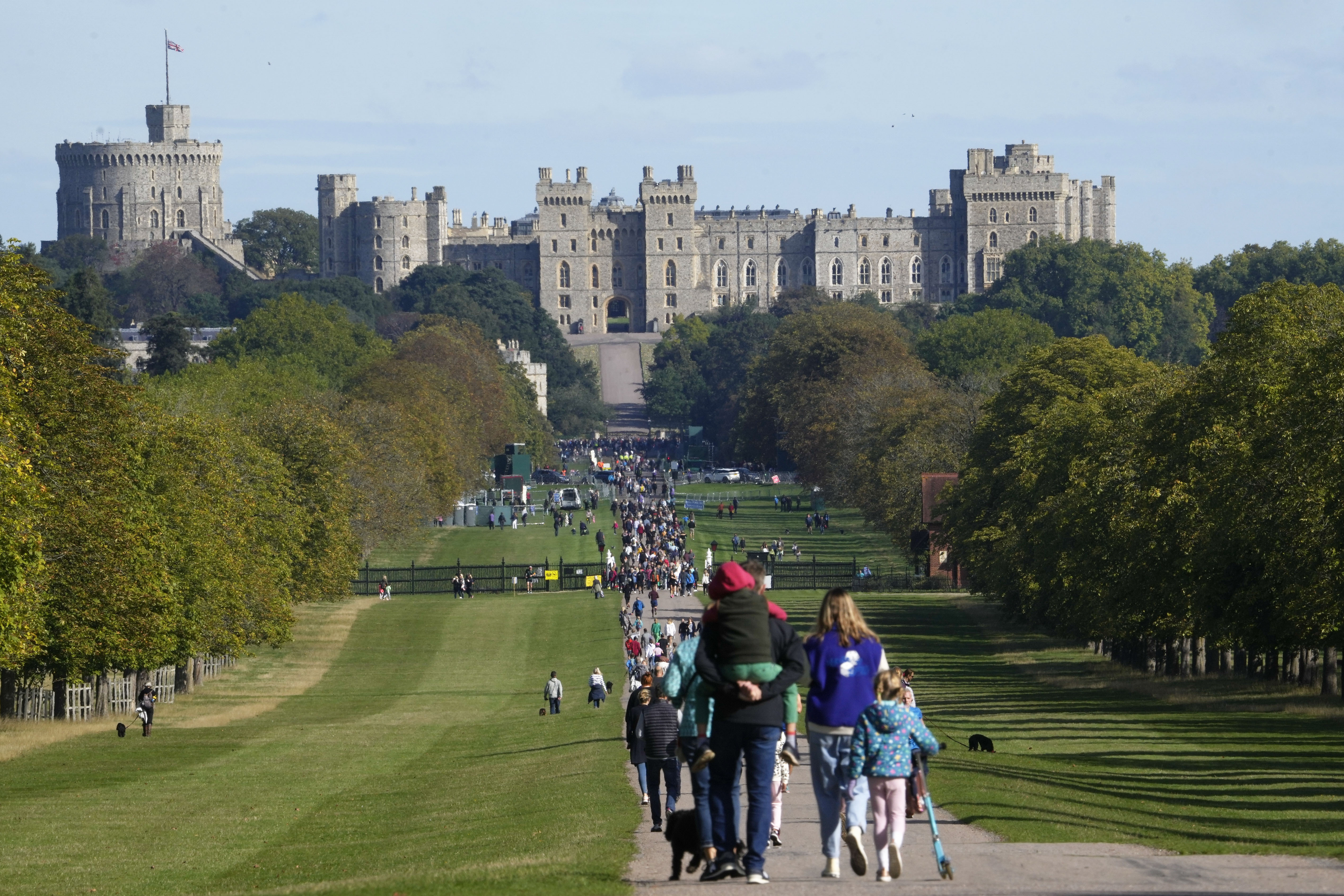 People make their way along the Long Walk towards Cambridge gate outside Windsor Castle to lay flowers for the late Queen Elizabeth II in Windsor, England, Sunday, Sept. 18, 2022. The Queen will lie in state in Westminster Hall for four full days before her funeral on Monday Sept. 19. (AP Photo/Gregorio Borgia)