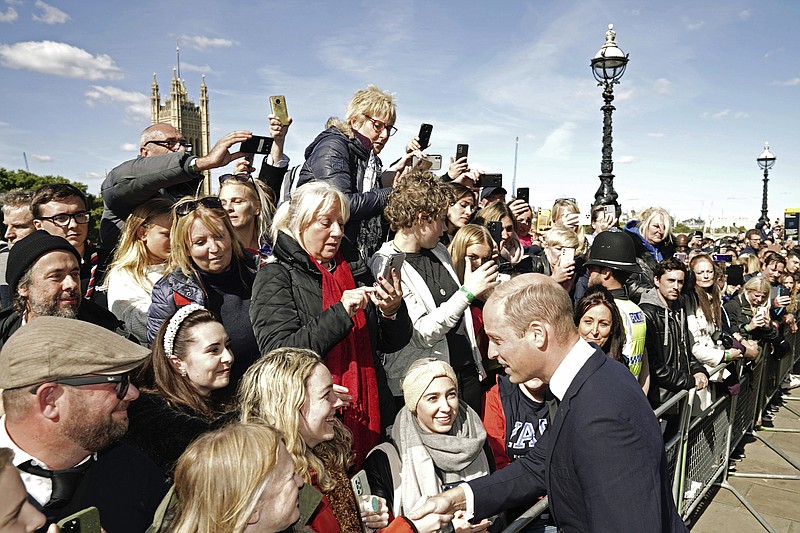 Britain's Prince William meets members of the public in the queue along the South Bank, near to Lambeth Bridge as they wait to view Queen Elizabeth II lying in state ahead of her funeral on Monday, in London, Saturday, Sept. 17, 2022. (Aaron Chown/Pool Photo via AP)

LONDON -- All eight of Queen Elizabeth II's grandchildren stood in silent vigil beside her coffin Saturday, capping another huge day in which thousands came to pay their respects. Mourners huddled in a line that snaked across London, enduring the city's coldest night in months and waits that stretched up to 16 hours.

Authorities warned that more chilly weather was expected Saturday night. "Tonight's forecast is cold. Warm clothing is recommended," the ministry in charge of the line tweeted.

As U.S. President Joe Biden and other world leaders and dignitaries flew into London ahead of the queen's state funeral on Monday, a tide of people wanting to say goodbye streamed into Parliament's Westminster Hall for another day Saturday. That's where the queen's coffin is lying in state, draped in her Royal Standard and capped with a diamond-studded crown.

The numbers of mourners have grown steadily since the public was first admitted on Wednesday, with a queue that snakes around Southwark Park and stretches for at least 5 miles (8 kilometers).

Honoring their patience, King Charles III and his eldest son Prince William made an unannounced visit Saturday to greet people waiting to file past Elizabeth's coffin, shaking hands and thanking mourners in the queue near Lambeth Bridge.

William, now the heir to the throne, stood, his head bowed, at the head of the coffin and Harry at the foot. Both princes, who are military veterans, were in uniform. Mourners continued to file past in silence.

Harry, who served in Afghanistan as a British army officer, wore civilian clothes earlier in the week as the queen's coffin left Buckingham Palace because he is no longer a working member of the royal family. He and his wife Meghan quit royal duties and moved to the United States in 2020. The king, however, requested that both William and Harry wear their military uniforms at the Westminster Hall vigil.

Before the vigil, Princesses Beatrice and Eugenie issued a statement praising their "beloved grannie."

"We, like many, thought you'd be here forever. And we all miss you terribly. You were our matriarch, our guide, our loving hand on our backs leading us through this world. You taught us so much and we will cherish those lessons and memories forever," the sisters wrote.

People queuing to see the queen have been of all ages and come from all walks of life. Many bowed before the coffin or made a sign of the cross. Several veterans, their medals shining, offered sharp salutes. Some people wept. Others blew kisses. Many hugged one another as they stepped away, proud to have spent hours in line to offer a tribute, even if it lasted only a few moments.

Overnight, volunteers distributed blankets and cups of tea to people in line as temperatures fell to 6 degrees Celsius (43 degrees Fahrenheit). Despite the weather, mourners described the warmth of a shared experience.

"It was cold overnight, but we had wonderful companions, met new friends. The camaraderie was wonderful," Chris Harman of London said. "It was worth it. I would do it again and again and again. I would walk to the end of the earth for my queen."

People had many reasons for coming, from affection for the queen to a desire to be part of a historic moment. Simon Hopkins, who traveled from his home in central England, likened it to "a pilgrimage."

"(It) is a bit strange, because that kind of goes against my grain," he said. "I've been kind of drawn into it."

Saturday's vigil followed one on Friday in which the queen's four children -- Charles, Anne, Andrew and Edward -- stood vigil at the coffin.

Edward said the royal family was "overwhelmed by the tide of emotion that has engulfed us and the sheer number of people who have gone out of their way to express their own love, admiration and respect (for) our dear mama."

On Saturday, the new king was holding audiences with incoming prime ministers, governor generals of the realms and military leaders.

The Metropolitan Police arrested a man Friday night during the viewing for a suspected public order offense. Parliamentary authorities said someone got out of the queue and tried to approach the coffin.

Tracey Holland told Sky News that her 7-year-old niece Darcy Holland was pushed out of the way by a man who tried to "run up to the coffin, lift up the standard and try to do I don't know what." She said police detained the man in "two seconds."

The lying-in-state continues until early Monday morning, when the queen's coffin will be borne to nearby Westminster Abbey for a state funeral, the finale of 10 days of national mourning for Britain's longest-reigning monarch. Elizabeth, 96, died at her Balmoral Estate in Scotland on Sept. 8 after 70 years on the throne.

After the service Monday at the abbey, the late queen's coffin will be transported through the historic heart of London on a horse-drawn gun carriage. It will then be taken in a hearse to Windsor, where the queen will be interred alongside her late husband, Prince Philip, who died last year.

Late Saturday, the government revealed details of where the public can watch the day's services and processions.

In addition to a number of viewing areas along the route, mourners will be able to watch on screens set up in Hyde Park, close to Buckingham Palace. There also will be screening sites at several towns and cities across the U.K and about 125 cinemas will open to screen the funeral.

Hundreds of troops from the British army, air force and navy held an early-morning rehearsal Saturday for the final procession. As troops lined the picturesque path leading to Windsor Castle, the thumping of drums echoed in the air as marching bands walked ahead of a hearse.

London police say the funeral will be the largest single policing event the force has ever handled, surpassing even the 2012 Summer Olympics and the Platinum Jubilee in June celebrating the queen's 70-year reign. 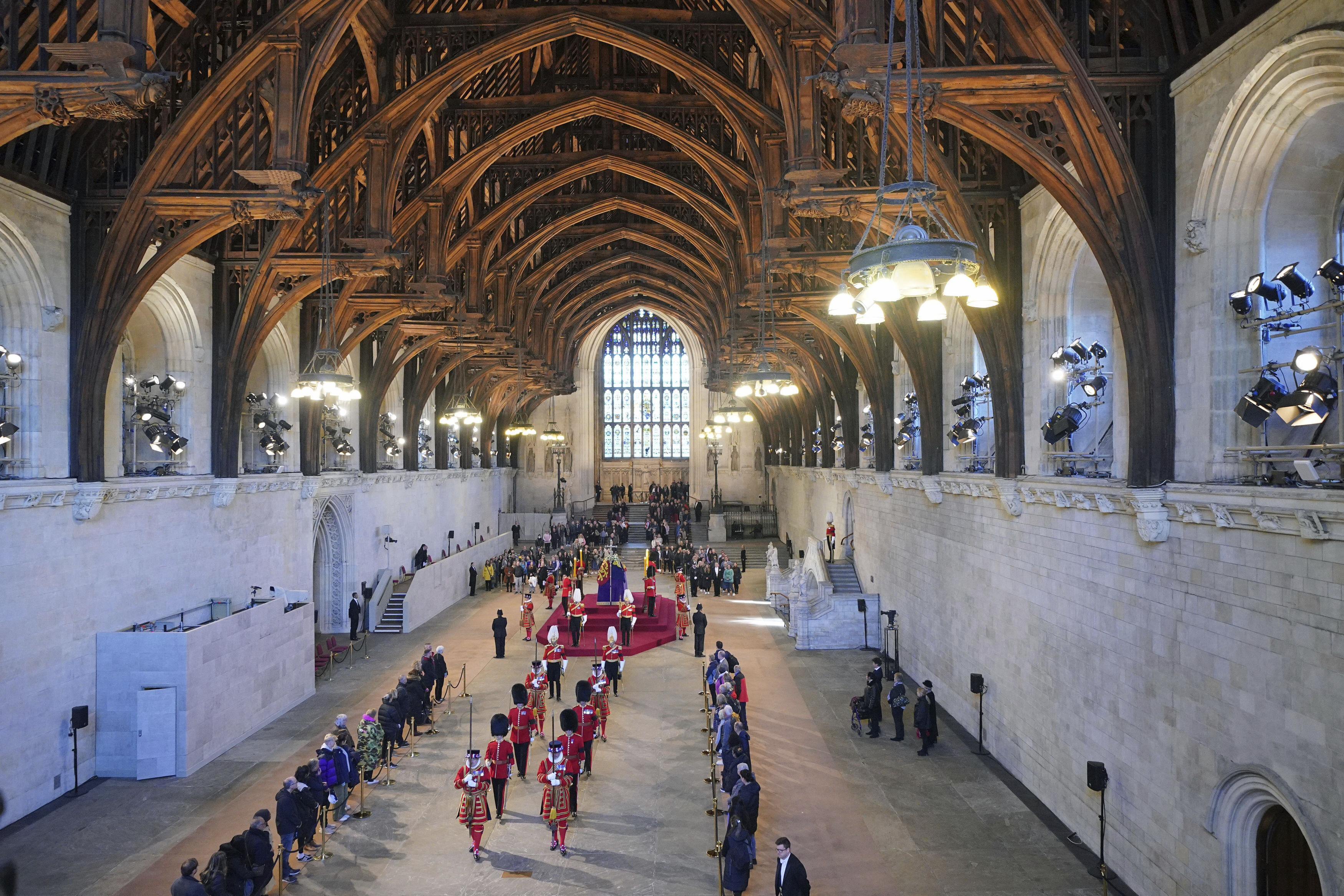 The guard is changed while members of the public file past the coffin of Queen Elizabeth II, draped in the Royal Standard with the Imperial State Crown and the Sovereign's orb and sceptre, lying in state on the catafalque in Westminster Hall, at the Palace of Westminster, in London, Saturday, Sept. 17, 2022. (Yui Mok/Pool Photo via AP) 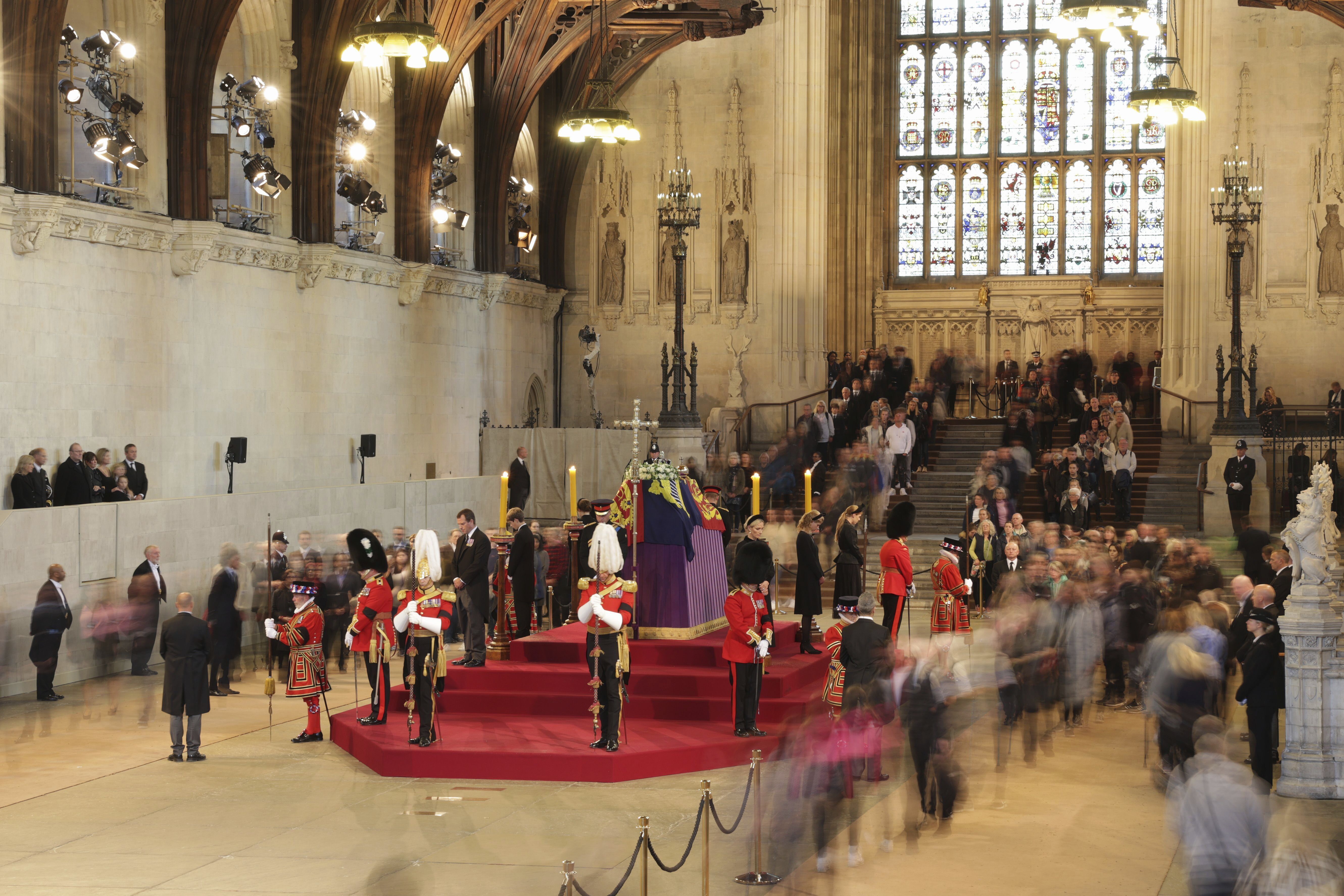 Members of the public pay their respects as they pass the coffin of Britain's Queen Elizabeth, while Prince William, Peter Phillips, James, Viscount Severn, Zara Tindall, Lady Louise Windsor and Princess Beatrice hold a vigil in honour of Queen Elizabeth II, as it lies in state, in Westminster Hall, at the Palace of Westminster, London, Saturday, Sept. 17, 2022, ahead of her funeral on Monday. (Chris Jackson/Pool Photo via AP) 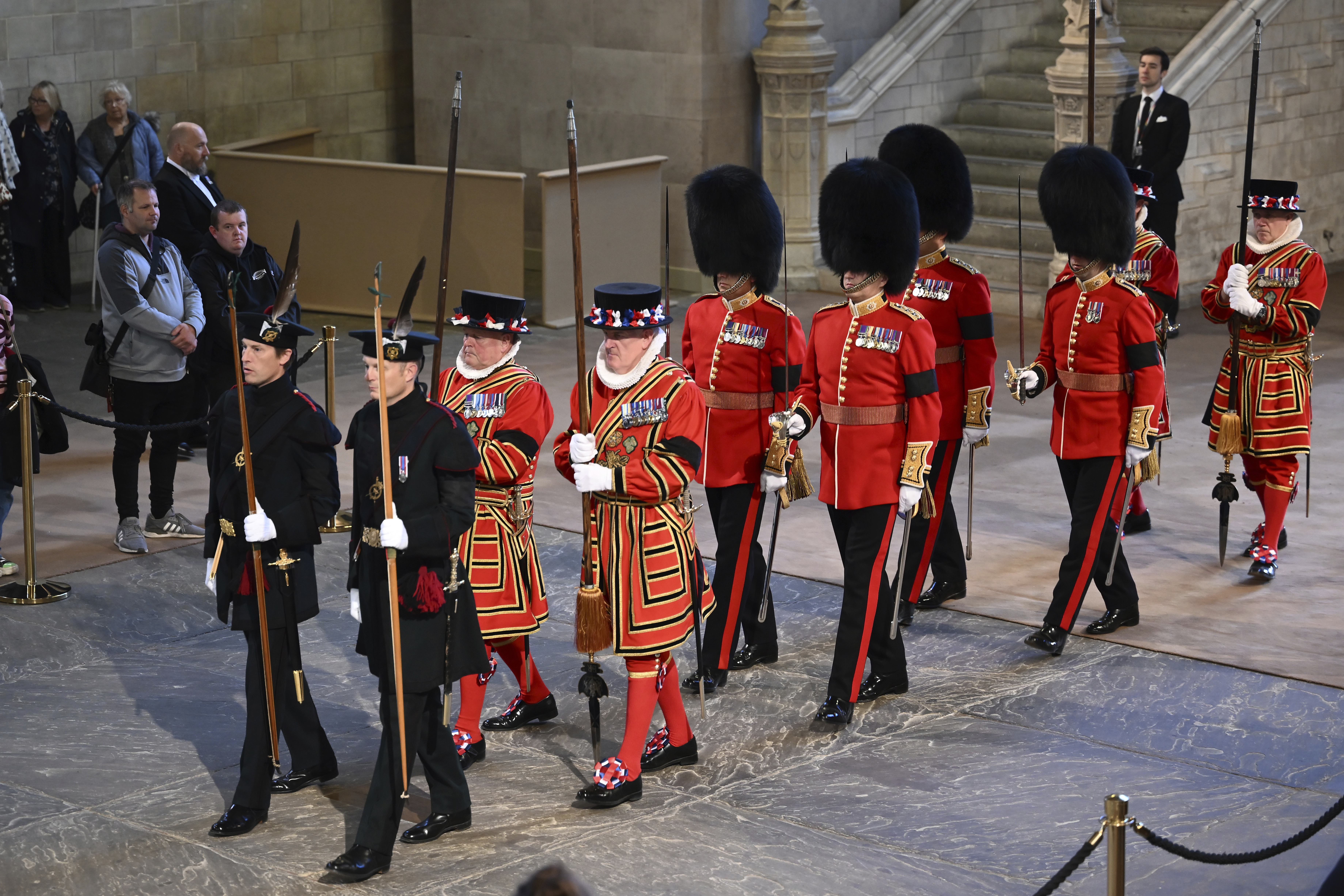 The Guard changes, as members of Royal Company of Archers, left, the Yeomen of the Guard, center, and members of the Coldstream Guard followed by Yeomen of the Guard go to take their places beside the coffin of Queen Elizabeth II as it Lies in State inside Westminster Hall, at the Palace of Westminster in London Saturday, Sept. 17, 2022. (Marco Bertorello/Pool Photo via AP) 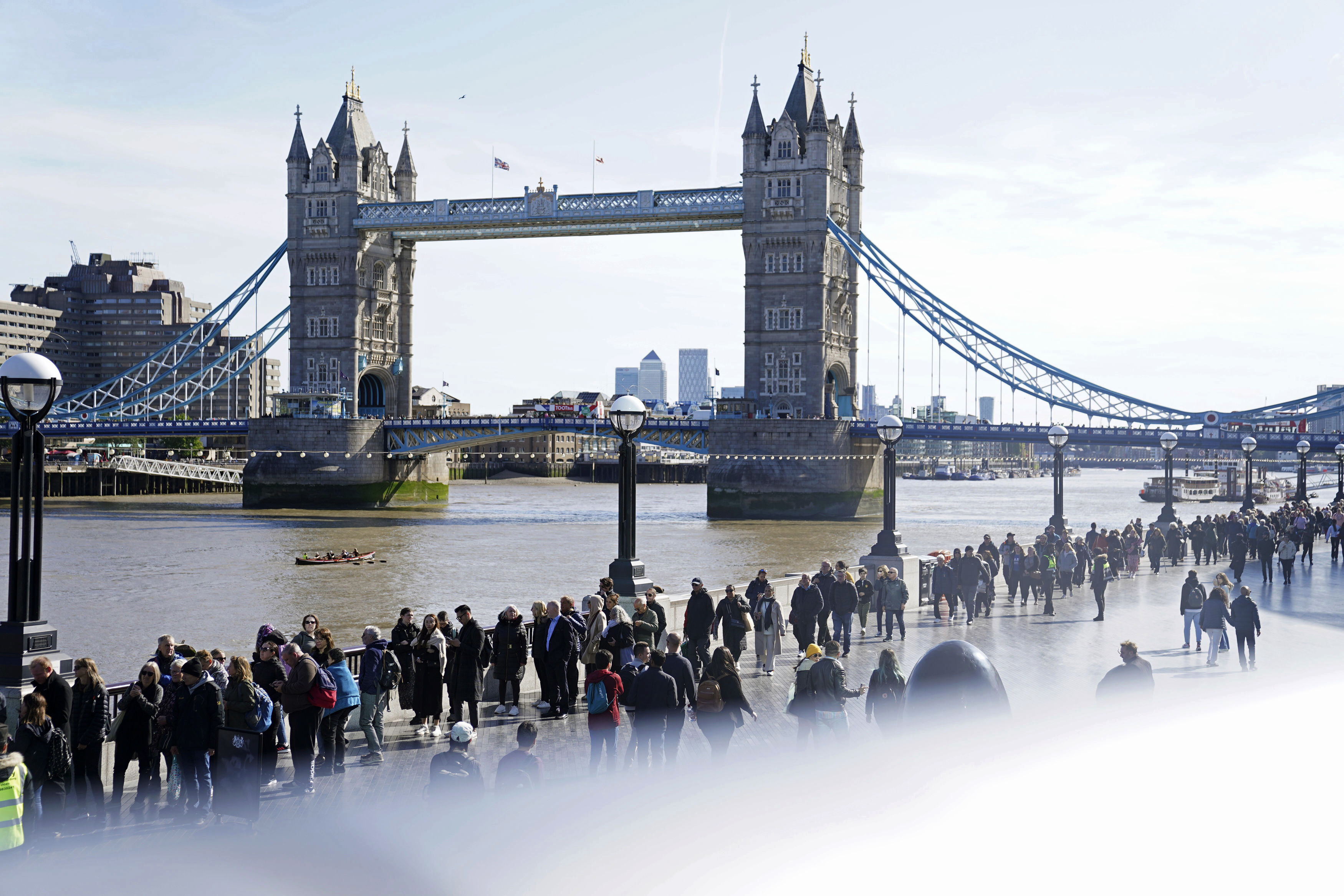 Members of the public line up near Tower Bridge as they wait to view Queen Elizabeth II's lying in state ahead of her funeral on Monday, in London, Saturday, Sept. 17, 2022. (James Manning/PA via AP) 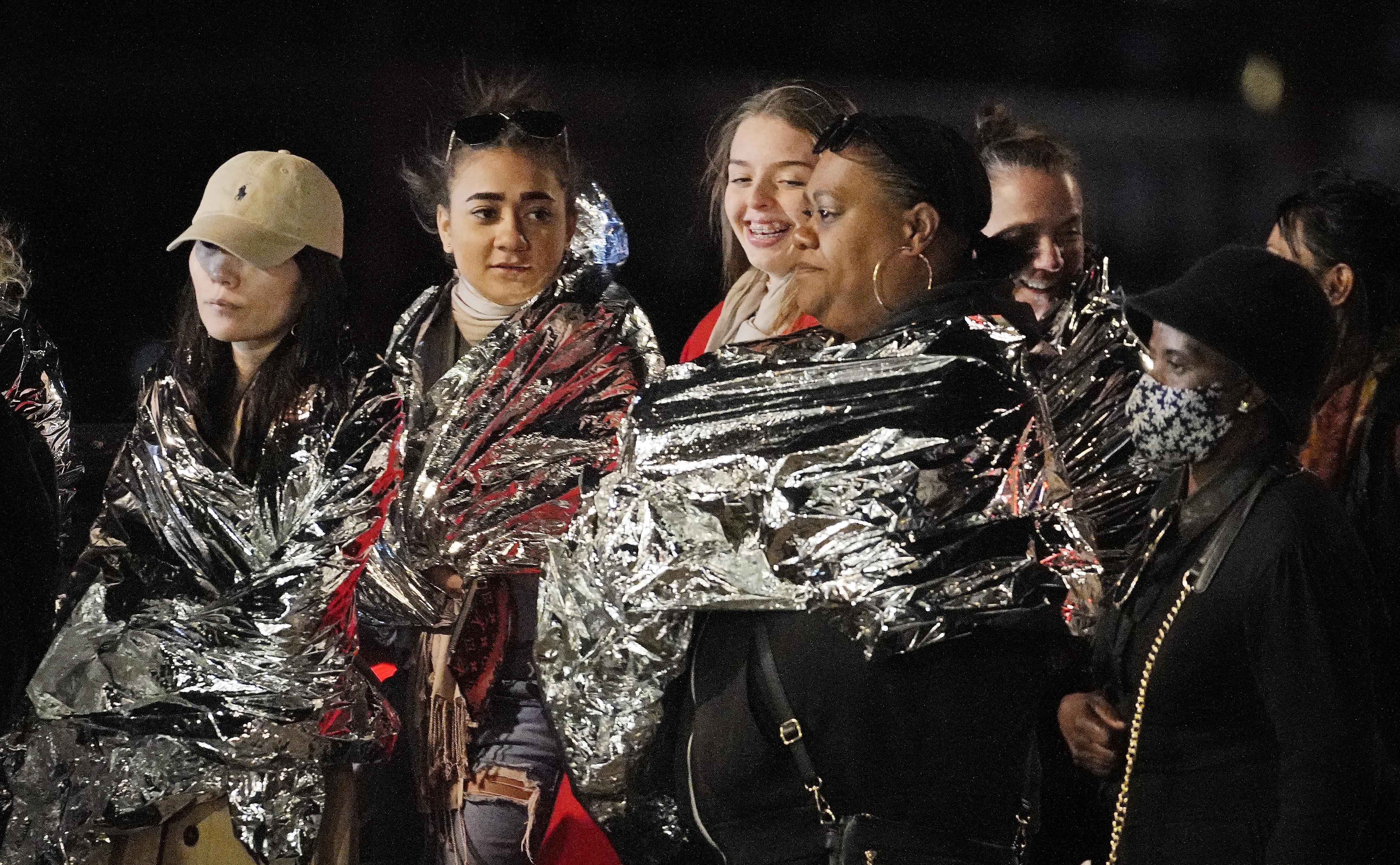 People in warming foil queue to pay their respect to the late Queen Elizabeth II during the Lying-in State, outside Westminster Hall in London, Friday night, Sept. 16, 2022. The Queen will lie in state in Westminster Hall for four full days before her funeral on Monday Sept. 19. (AP Photo/Martin Meissner) 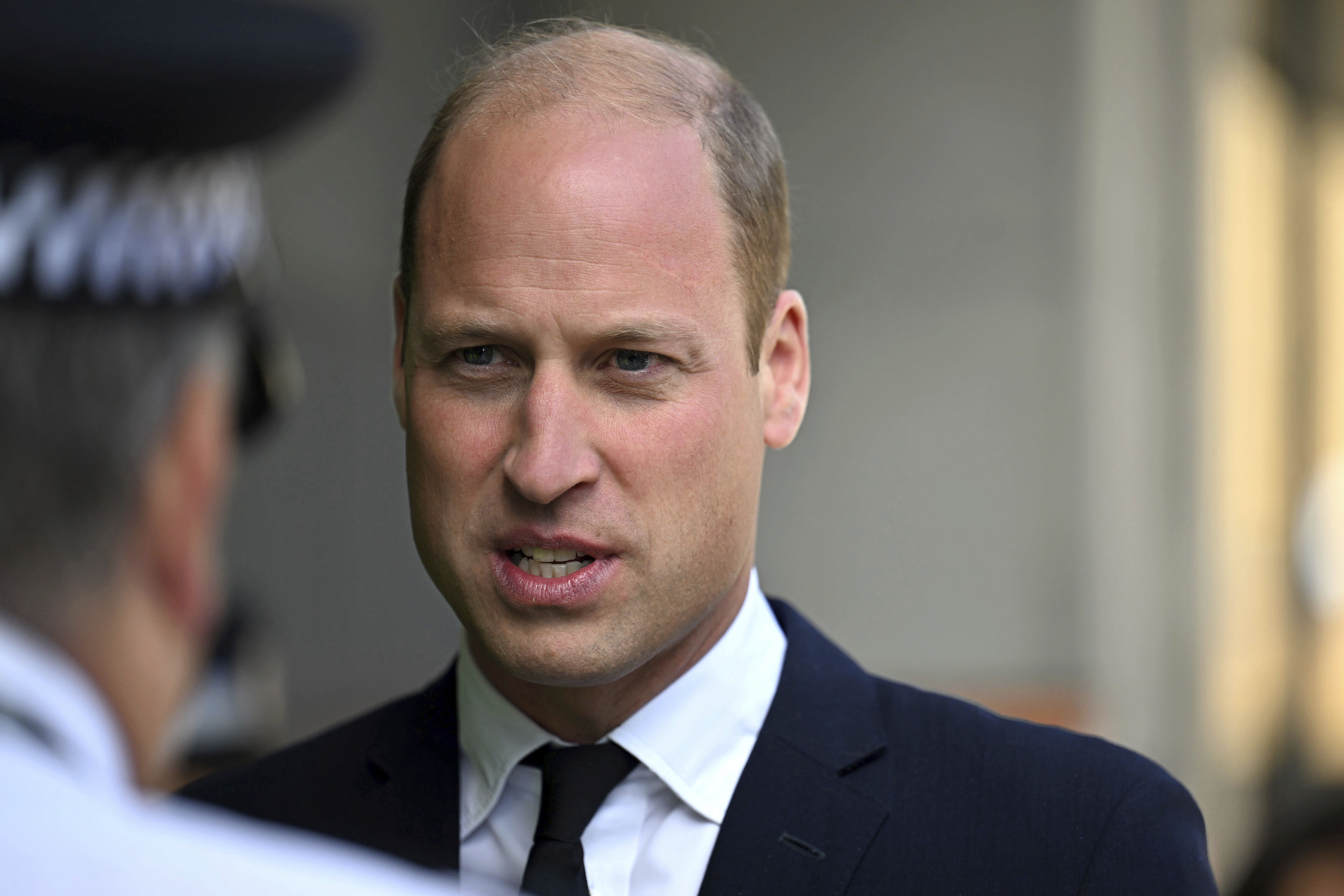 Britain's Prince William meets members of the Metropolitan Police Service during a visit to thank them for their work and support, ahead of the funeral of late Queen Elizabeth II in London, Saturday, Sept. 16, 2022. (Carl de Souza/Pool via AP) 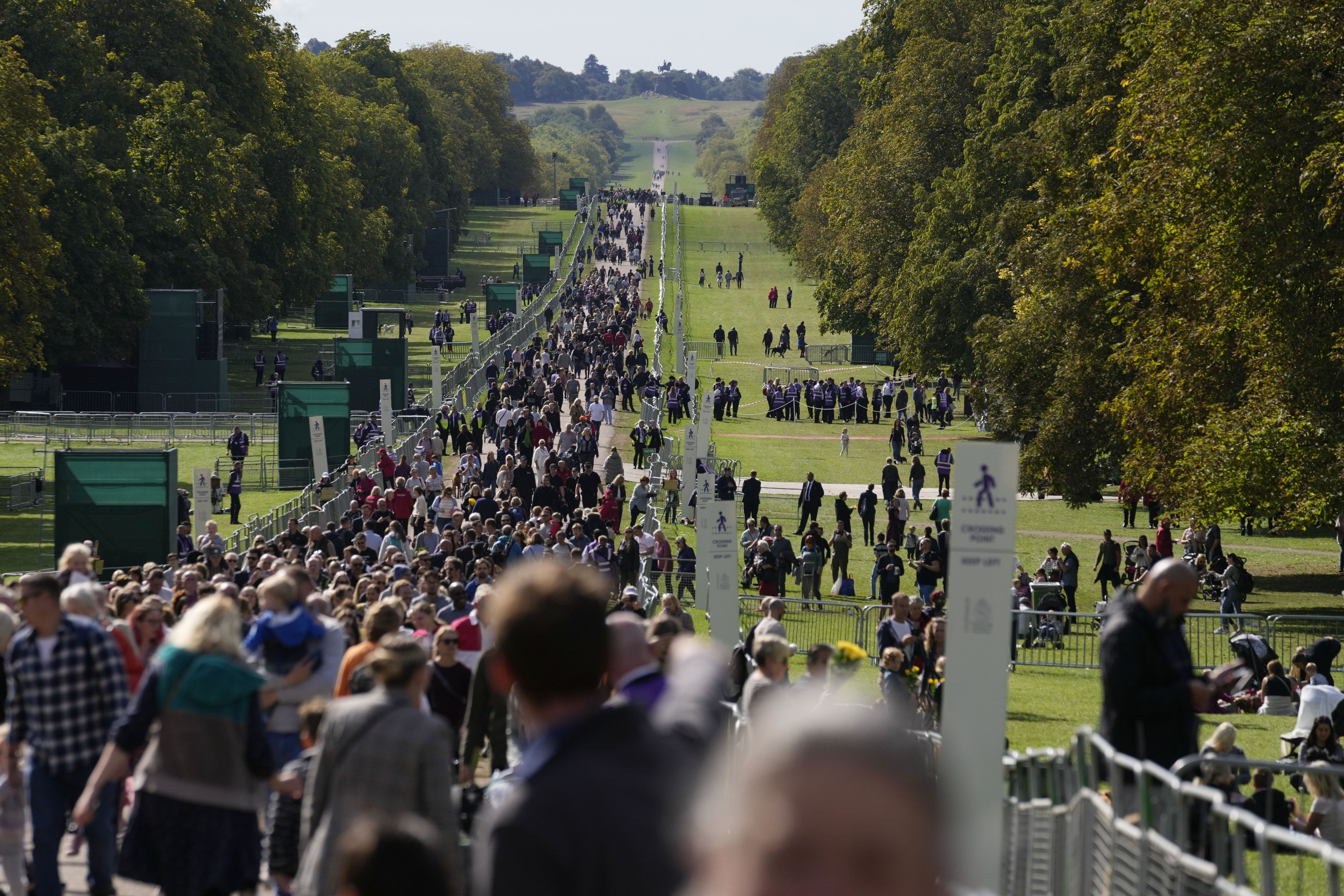 People make their way along the Long Walk towards Cambridge gate outside Windsor Castle to lay flowers for the late Queen Elizabeth II in Windsor, England, Saturday, Sept. 17, 2022. The Queen will lie in state in Westminster Hall for four full days before her funeral on Monday Sept. 19. (AP Photo/Gregorio Borgia) 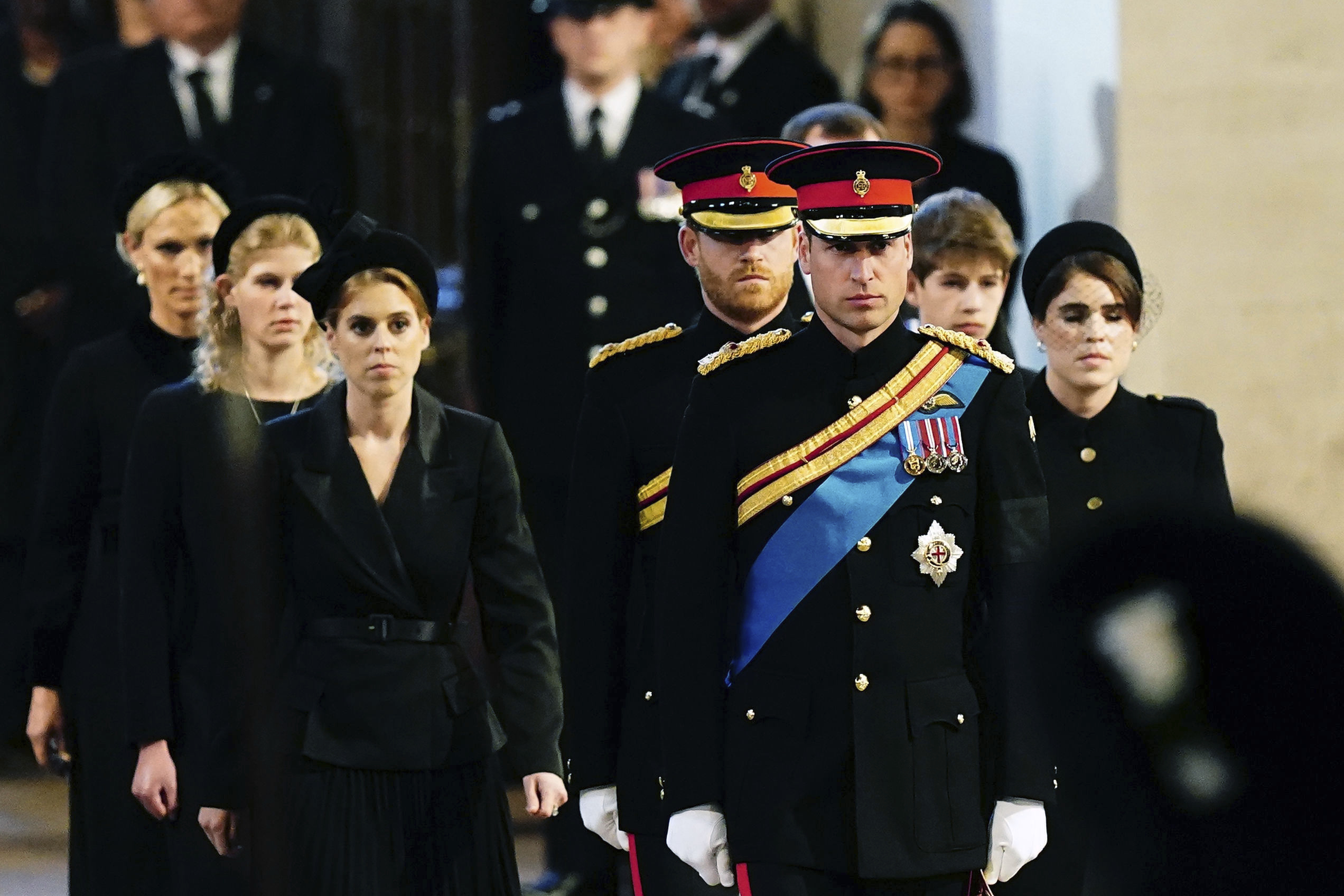 Left to right: Zara Tindall, Lady Louise, Princess Beatrice, Prince William, the prince of Wales, Prince Harry, Princess Eugenie, Viscount James Severn and Peter Phillips attend the vigil of the Queen's grandchildren around the coffin, as it lies in state on the catafalque in Westminster Hall, at the Palace of Westminster, London, Saturday, Sept. 17, 2022, ahead of her funeral on Monday. (Aaron Chown/Pool Photo via AP) 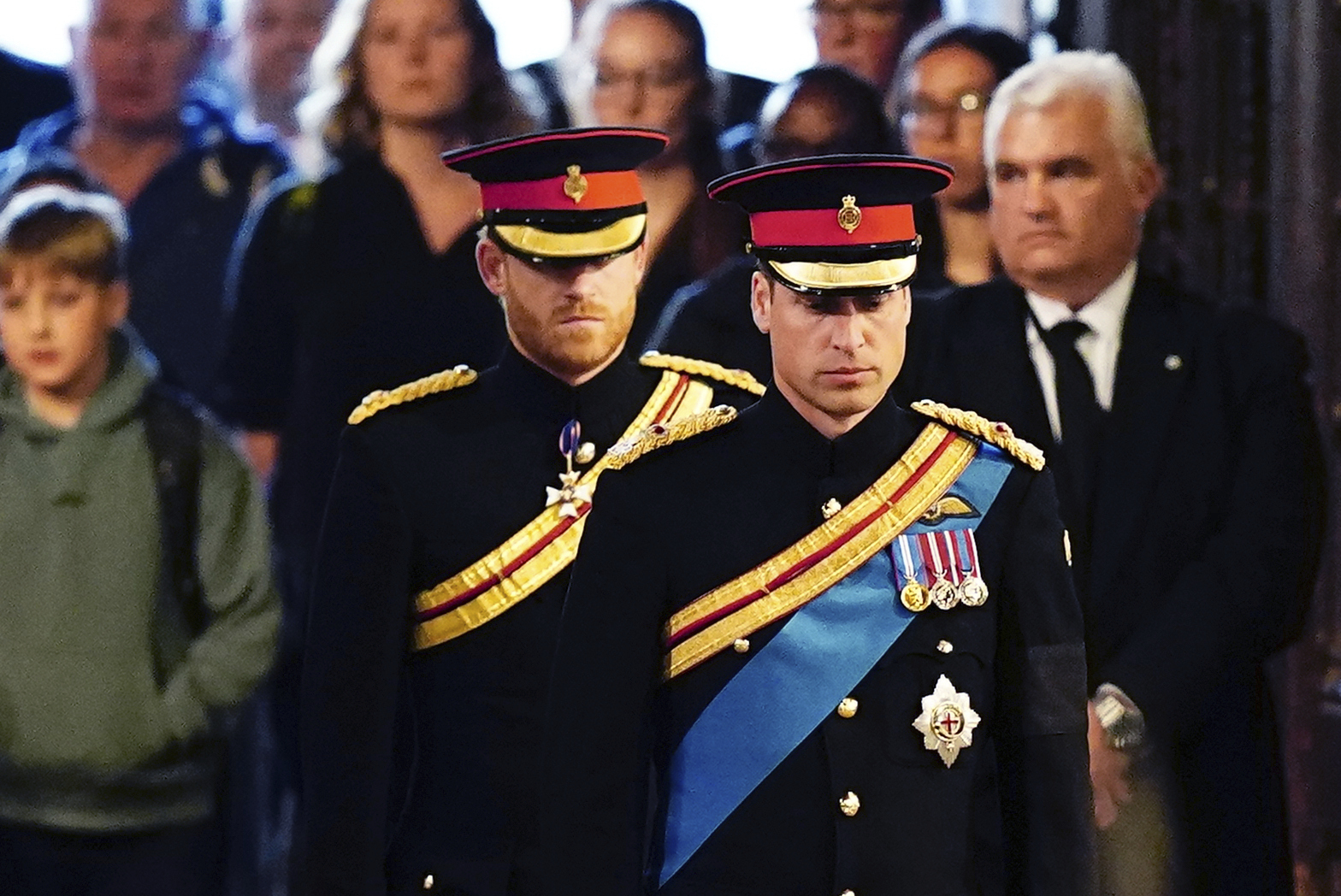 Prince William, the prince of Wales, right, and Prince Harry attend the vigil of the Queen's grandchildren around the coffin, as it lies in state on the catafalque in Westminster Hall, at the Palace of Westminster, London, Saturday, Sept. 17, 2022, ahead of her funeral on Monday. (Aaron Chown/Pool Photo via AP)