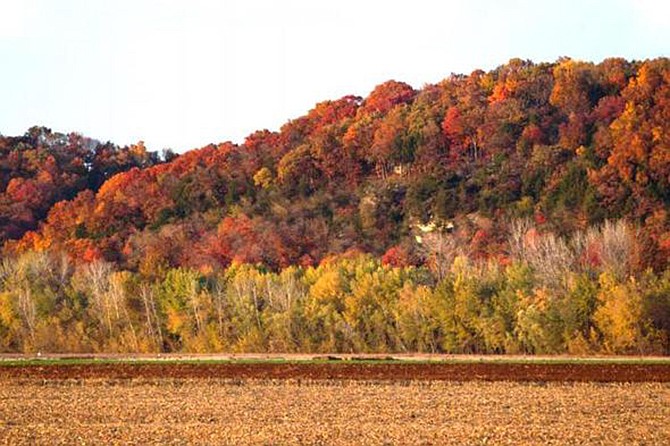 The Missouri Department of Conservation encourages people to discover nature through fall-color fun, such as driving roads along the Missouri River. This picture from a past fall was taken near Hartsburg.

The Missouri Department of Conservation (MDC) will be offering weekly online fall color updates from agency foresters across the state.

"The reports begin around mid-September and are updated weekly through November," MDC Forestry Field Programs Supervisor Russell Hinnah said in a news release. "They show users where trees are beginning to turn and also suggest best places to see the changing leaves."

Predicting the peak of fall color can be difficult, but much depends on the weather according to Hinnah, who noted the dry summer weather could affect this year's color.

"We had droughty conditions over the summer, which could cause trees to lose their leaves early or begin changing colors earlier than normal," he explained. "This may affect the amount of fall color we see later in the season."

The season's chilly evenings are imperative for leaves to change color, Hinnah added.

"Sugars produced by photosynthesis are trapped inside leaves by the chilly autumn nights," he said. "Those sugars are the building blocks for the rich red, yellow, orange and purple pigments. Cool nights cause the breakdown of green pigments, allowing the fall colors to show through."

Missouri trees first begin changing color in the northern part of the state, then move southward. Sassafras, sumac and Virginia creeper are some of the earliest to change in mid-September. In late September, black gum, bittersweet and dogwood are turning. The peak of fall color is usually around mid-October.

"Trees such as maples, ashes, oaks, and hickories are at the peak of their fall display by the middle of October," Hinnah noted. "Normally by the end of the month, colors are fading and leaves are falling."

Fall color updates can be found at mdc.mo.gov/fallcolor.