Local reps: Special session off to a ‘silly’ start 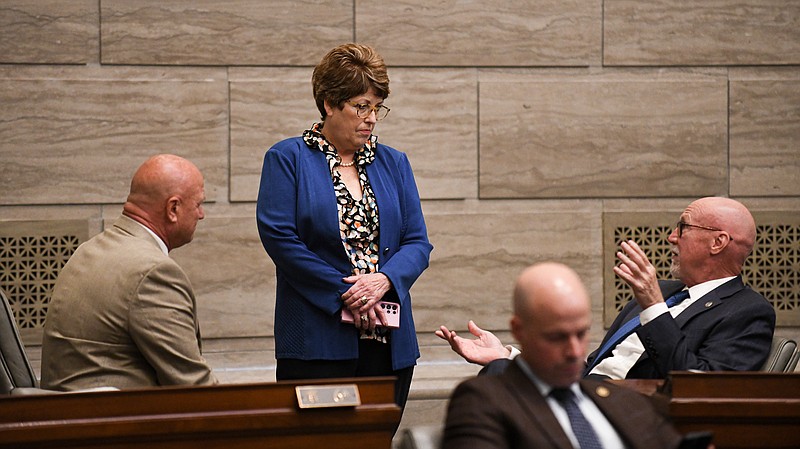 But the 26 bills filed Wednesday indicate the session will be anything but straightforward and quick. Lawmakers introduced a dozen pieces of legislation that fall outside the narrow scope of the governor's call for a special session focused on permanent income tax relief and agricultural tax credits, and 10 alternative plans for the tax cut.

"It's silly," Sen. Jeanie Riddle, a Mokane Republican and the majority caucus secretary, said of the 22 bills filed in the Senate.

"I hope that we can get things done in a concise, succinct manner that doesn't cost the taxpayers a lot of money," she added.

Senators have offered the only tax cut bills, putting forward 10 alternative plans to the governor's recommendation to reduce the top income tax rate from 5.3 percent to 4.8 percent, increase the standard deduction by $2,000 for individuals and $4,000 for joint filers and eliminate the bottom income tax bracket.

The Missouri House of Representatives introduced only four bills for the session, just one of which relates to agriculture tax credits. The other bills are aimed at exempting eyeglasses and contact lenses from sales taxes, legalizing recreational marijuana and legalizing sports wagering and gambling.

Rep. Rudy Veit, R-Wardsville, said there isn't a lot going on in the lower chamber yet.

There is no consensus among lawmakers on what the finalized bill will look like, he said, and there is confusion about what will happen during the special session.

"I know the agriculture tax credit bill most likely will be in committee this week or next week -- and on the floor next week," Veit said. "I have no idea where the tax bill will be."

A lot of what occurred in the House on Wednesday was procedural, according to Rep. Dave Griffith, R-Jefferson City. Those things have to be done before lawmakers may meet in committees and begin discussing issues.

A wide array of topics

In addition to a few tax cut proposals that mirror the governor's call, Senators proposed legislation to reduce and eliminate the state's corporate income tax and the recently increased motor fuel tax, as well as bills that would prevent students from playing on sports teams that don't align with their biological sex at birth and ban the teaching of critical race theory in public schools.

Sen. Bob Onder, R-Lake Saint Louis, proposed one of the bills outside the scope of the governor's call. It contains provisions to ban critical race theory, ban students from playing sports that don't align with their biological sex at birth, ban health care providers from providing gender transition care to minors, and allow parents to direct the education of their child in public school through a "Parents' Bill of Rights."

"Those issues have been before us for some time now ..." Onder said from the Senate floor. "And this body has refused -- has neglected -- to take any action on some of these issues."

Sen. Mike Bernskoetter, R-Jefferson City, introduced a bill that would change regulations around anhydrous ammonia, a topic he's introduced for several years but admittedly falls outside the scope of the special session.

"It's agriculture related," he said. "It's not technically in the governor's call, but I think it's an important issue. We've been working on it and we didn't get it done two years ago so we got it in the bill that passed this last session."

Bernskoetter's anhydrous ammonia language was included as a provision in HB 1720, the agricultural bill the governor vetoed because it contained two-year sunsets on some agricultural tax credits. The governor is pushing lawmakers to extend the sunsets for at least six years.

Bernskoetter said he offered the bill with hopes Parson will expand the scope of the session.

Parson has already rejected two calls to expand the scope of the special session: one from Democrats asking to address contraception and ectopic pregnancies and another from a bipartisan coalition wanting to take up recreational marijuana before voters decide its fate on the Nov. 8 ballot.

Bernskoetter said he's not aware of any appetite to expand the scope, but his legislation will be waiting if it happens.

"I just wanted to be prepared, just in case," he said.

It's not uncommon for legislators to introduce bills outside the scope of the governor's call, Bernskoetter said, but they're usually pet projects that don't get a hearing.

Most of the Senate bills that fall outside the governor's call came from members of the now-disbanded Conservative Caucus, whose feud with Republican leadership ground most legislation last session to a halt.

The Senate Republicans have an opportunity to restore relations while working on the tax cut and agricultural tax credits, Bernskoetter said. He said prior to the caucus meeting on Wednesday there hadn't yet been discussion of partnering the tax bills with social issues that are outside the governor's call.

"We met in caucus yesterday and today," he said Wednesday. "We talked about what we want to do -- what will be best for our districts as a whole. What will be best for Missouri. It may not mirror what the governor wants to happen. That's when all that collaboration begins."

Griffith said it's best if lawmakers don't stand hard and fast on issues. They have to do what is going to be best for all Missourians, he said, which can often mean putting aside what may benefit their own districts.

Griffith said he reads all his emails and tries to do what his district wishes. He said he understands that he receives more emails from one side of issues and is grateful when folks with different opinions weigh in.

"I try to make the best decisions I can," said Griffith, who has gone door-to-door while campaigning this week. "I spent a lot of time the last two days just listening (to voters)."

Veit said lawmakers want to be able to get by in hard times without borrowing money.

"I don't think you ever budget yourself to the max and leave yourself without room for major catastrophes," he said. "You want to have a sufficient cushion for hard times."

There are a number of lawmakers, he said, who want the tax cut to be addressed now so they don't spend the entire regular session talking about it.

"We have 161 different ideas of how it should be. If the Senate comes to something that's semi-reasonable, it can move through the House," Veit said. "The ball on tax cuts is kind of in the Senate's court."

Bernskoetter said he expects debate and hearings to primarily begin Tuesday, but a timeline for how long the session may last is harder to project.

"It really shouldn't take a long time -- either you're for it or against it," he said. "But there are so many other things with taxing."

Immediately after adjourning the first day of the special session Wednesday, the Missouri Senate went into veto session and then adjourned for a caucus meeting. It adjourned after about 30 minutes Thursday without debate on legislation.