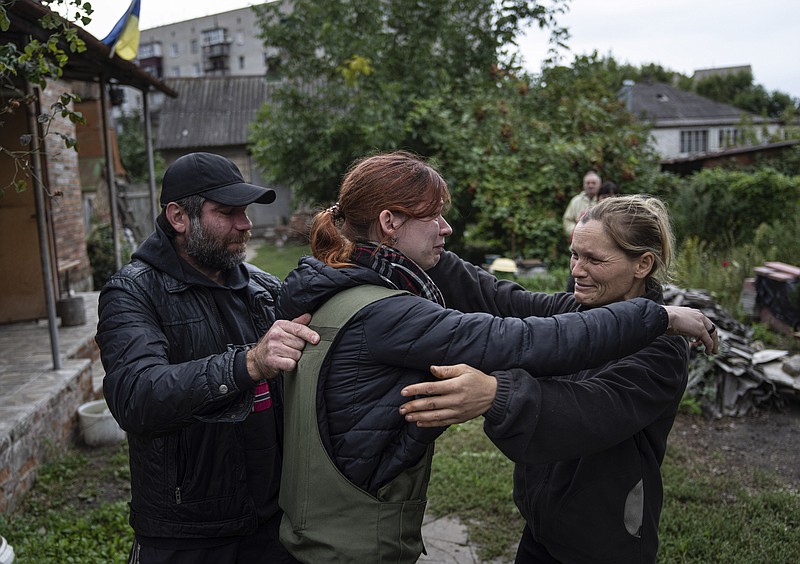 Maria, center, hugs her parents Marina and Alexander during their first meeting after seven months since the beginning of the war in the recently retaken town of Izium, Ukraine, Wednesday, Sept. 14, 2022. (AP Photo/Evgeniy Maloletka)

A week after a Ukrainian counteroffensive caused Russian troops to retreat from a northeast region, Zelenskyy met with European Union chief Ursula von der Leyen during her third wartime visit to Kyiv. Von der Leyen publicly conveyed the wholehearted support of the 27-nation bloc and wore an outfit in Ukraine's national colors.

"It's absolutely vital and necessary to support Ukraine with the military equipment they need to defend themselves. And they have proven that they are able to do this, if they are well equipped," she said.

Highlighting the breadth of the nearly 7 months of fighting, air raid sirens blared several times in the Ukrainian capital during von der Leyen's meeting with Zelenskyy, showing the fear and damage Russian troops could still inflict.

Russian military bloggers charged the attack was intended to flood areas downstream where Ukrainian forces made inroads as part of their counteroffensive. The Ukrainian head of the local government later reported a second attack on the dam and said emergency crews were working to prevent more water from escaping.

The first attack so close to his roots angered Zelenskyy, who said the strikes had no military value.

"In fact, hitting hundreds of thousands of ordinary civilians is another reason why Russia will lose," he said.

But the president, who said Ukrainian forces had recaptured almost 400 Russian-occupied settlements in less than a week, remained in a buoyant mood and shrugged off a traffic collision he was in after a battlefield visit early Thursday.

On a day when political optics stood out, the U.N. General Assembly said it would vote whether to make a procedural exception that would Zelenskyy to deliver a pre-recorded address to a meeting of world leaders next week.

The proposed document to be voted on today would have the 193-member body express concern that leaders of "peace-loving sovereign states" can't participate in person "for reasons beyond their control owing to ongoing foreign invasion, aggression, military hostilities that do not allow safe departure from and return to their countries, or the need to discharge their national defense and security duties and functions."

In Washington, a volunteer Ukrainian medic who was captured in Ukraine's besieged port city of Mariupol told U.S. lawmakers Thursday of comforting fellow detainees during her three months in Russian captivity, cradling them as male, female and child prisoners succumbed to torture and untreated wounds.

Ukrainian Yuliia Paievska, who was detained by pro-Russian forces in March and held at shifting locations in Russian-allied territory in Ukraine's Donetsk region, spoke to lawmakers with the Commission on Security and Cooperation in Europe, better known as the Helsinki Commission.

Paievska, giving her most detailed public account of her time in captivity, described "prisoners in cells screaming for weeks, and then dying from the torture without any medical help." She continued: "Then in this torment of hell, the only things they feel before death is abuse and additional beating."

As Zelenskyy courted allies with the optimism from the events of the last week, Russian President Vladimir Putin met one-on-one with Chinese President Xi Jinping at a regional security summit in Uzbekistan.

Xi's government, which said it had a "no limits" friendship with Moscow before the Feb. 24 invasion of Ukraine, has refused to criticize Russia's military actions. At the start of their talks on Thursday, Putin thanked Xi and said he was ready to discuss unspecified "concerns" by China about Ukraine.

"We highly appreciate the well-balanced position of our Chinese friends in connection with the Ukrainian crisis," Putin said, facing Xi across a long table.

Putin and Xi's formal meeting on the sidelines of the eight-nation Shanghai Cooperation Organization, a security alliance created as a counterweight to U.S. influence, provided a contrast to Zelenskyy's warm encounter with the president of the European Union's executive commission.

On Thursday, European Parliament completed the drawn-out process of approving a 5 billion-euro preferential loan to Ukraine, the key part of a 9 billion-euro aid package to offset the cost of war.

Zelenskyy said more assistance cannot come quickly enough. He insisted the West needed to impose more sanctions on the Kremlin and to provide more weapons for his frontline soldiers to use.

Zelenskyy said the only way to guarantee the security of Ukrainians is to "close the sky" over the country with air defense systems provided by Western allies.

"In the decisive phase that Ukraine currently finds itself, I also don't believe that it's a decision which can be delayed for long," Baerbock said that

Having little with which to repay his Western partners, Zelenskyy said von der Leyen's name would by engraved on a plaque in a square near Ukraine's parliament that is called "Walk of the Brave."

"Here are the names of those leaders of Europe and the world who supported our state and were on our side against the aggression," he said. 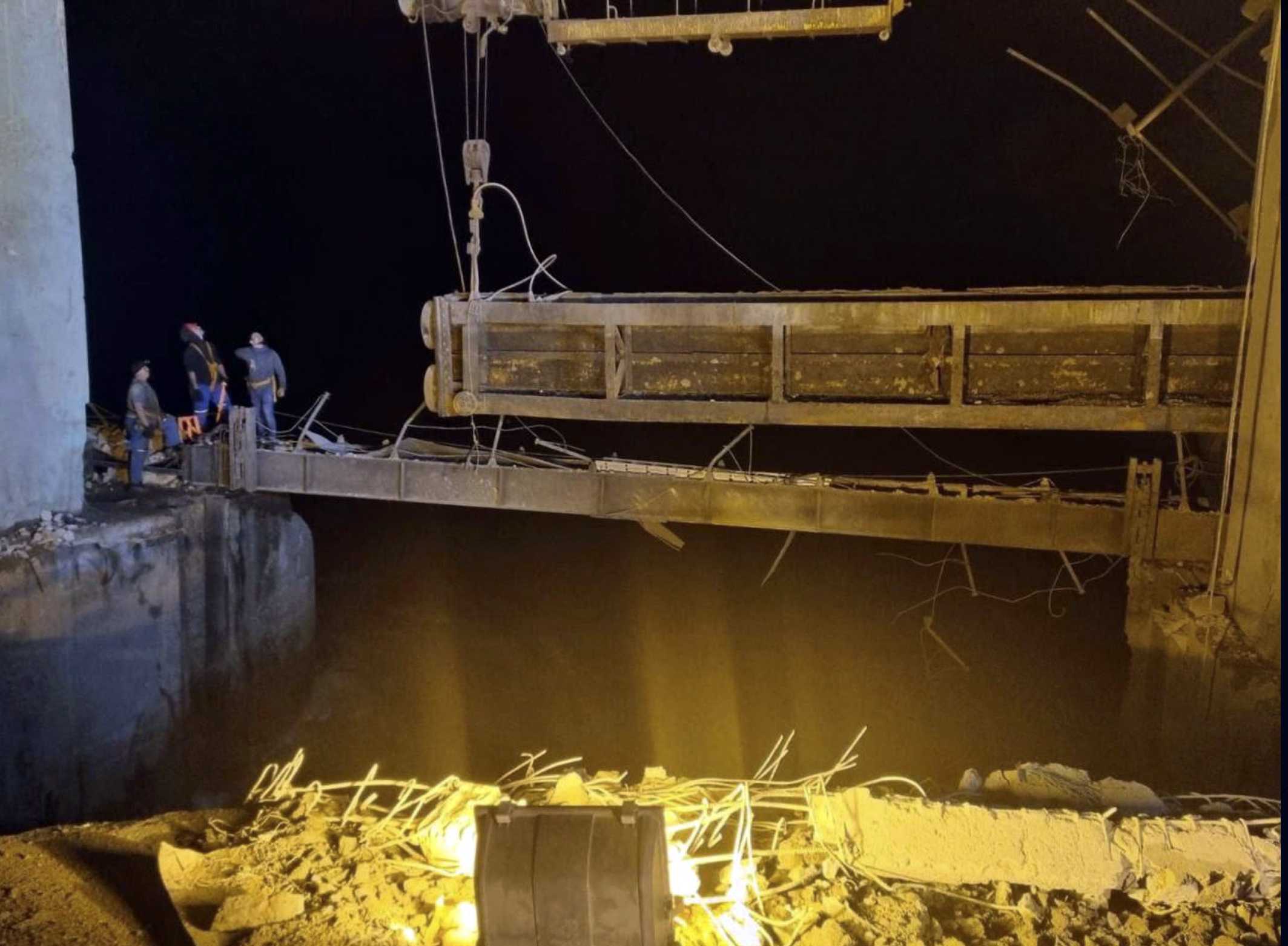 In this photo provided by the Ukrainian Emergency Service, workers repair the structure after the strikes damaged the dam and a nearby pumping station in Kryvyi Rih, Ukraine, Wednesday, Sept. 14, 2022. Ukrainian officials say a Russian missile attack on Sept. 14 struck a dam of a reservoir close to Kryvyi Rih, the birthplace of President Volodymyr Zelenskyy, causing flooding in parts of the city. (Ukrainian Emergency Service via AP Photo) 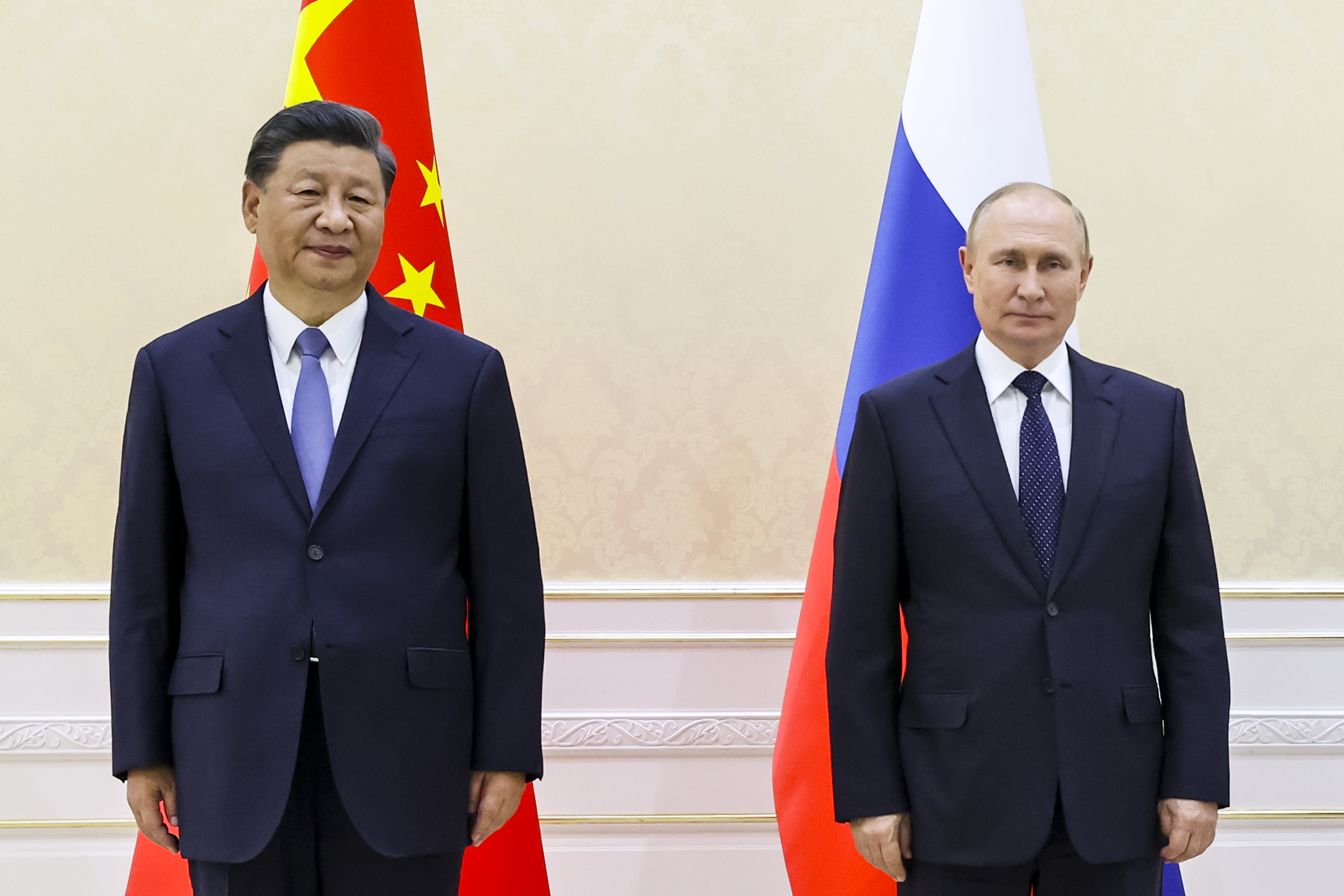 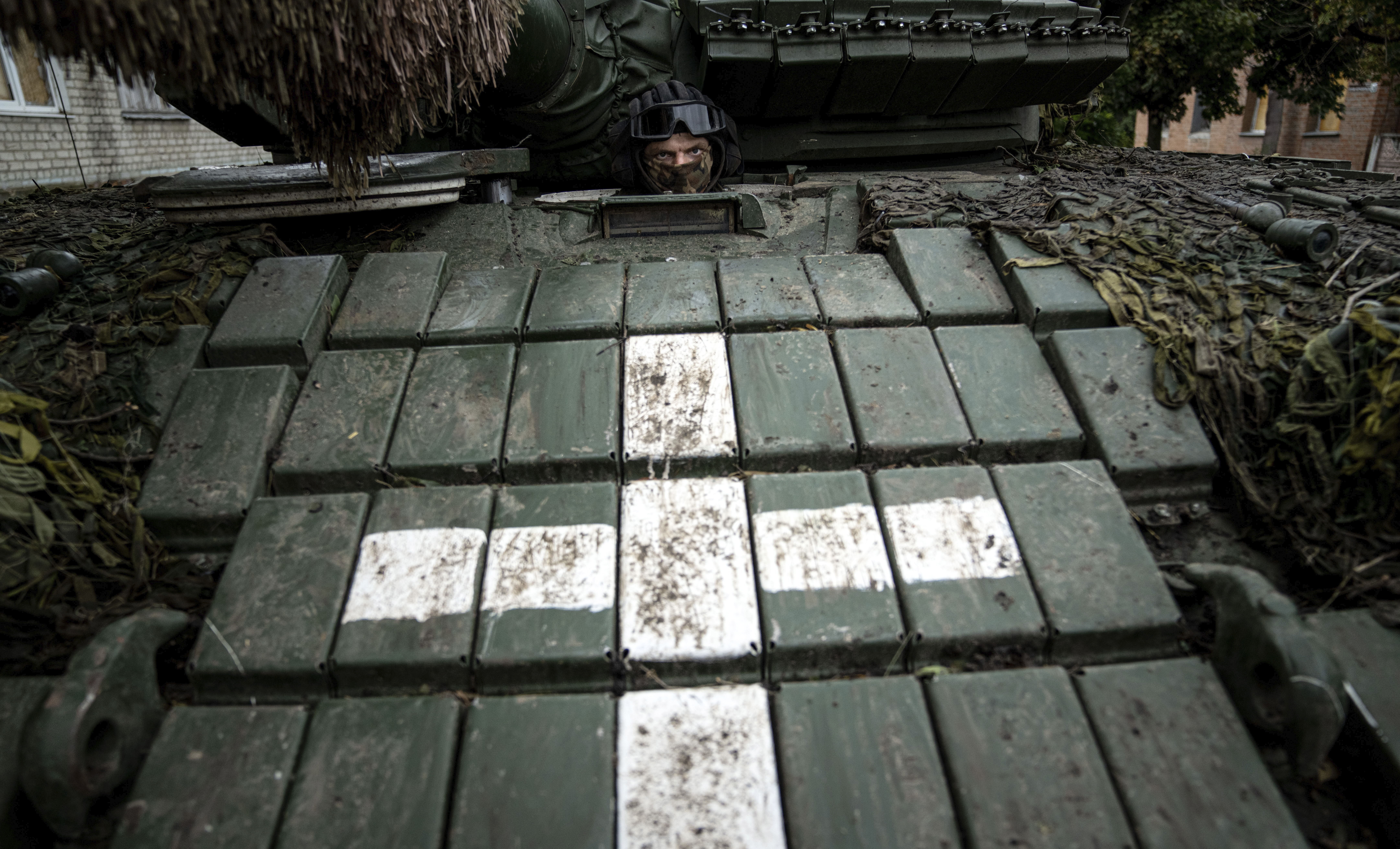 A Ukrainian serviceman sits in a tank, in the recently retaken area of Izium, Ukraine, Wednesday, Sept. 14, 2022. (AP Photo/Evgeniy Maloletka) 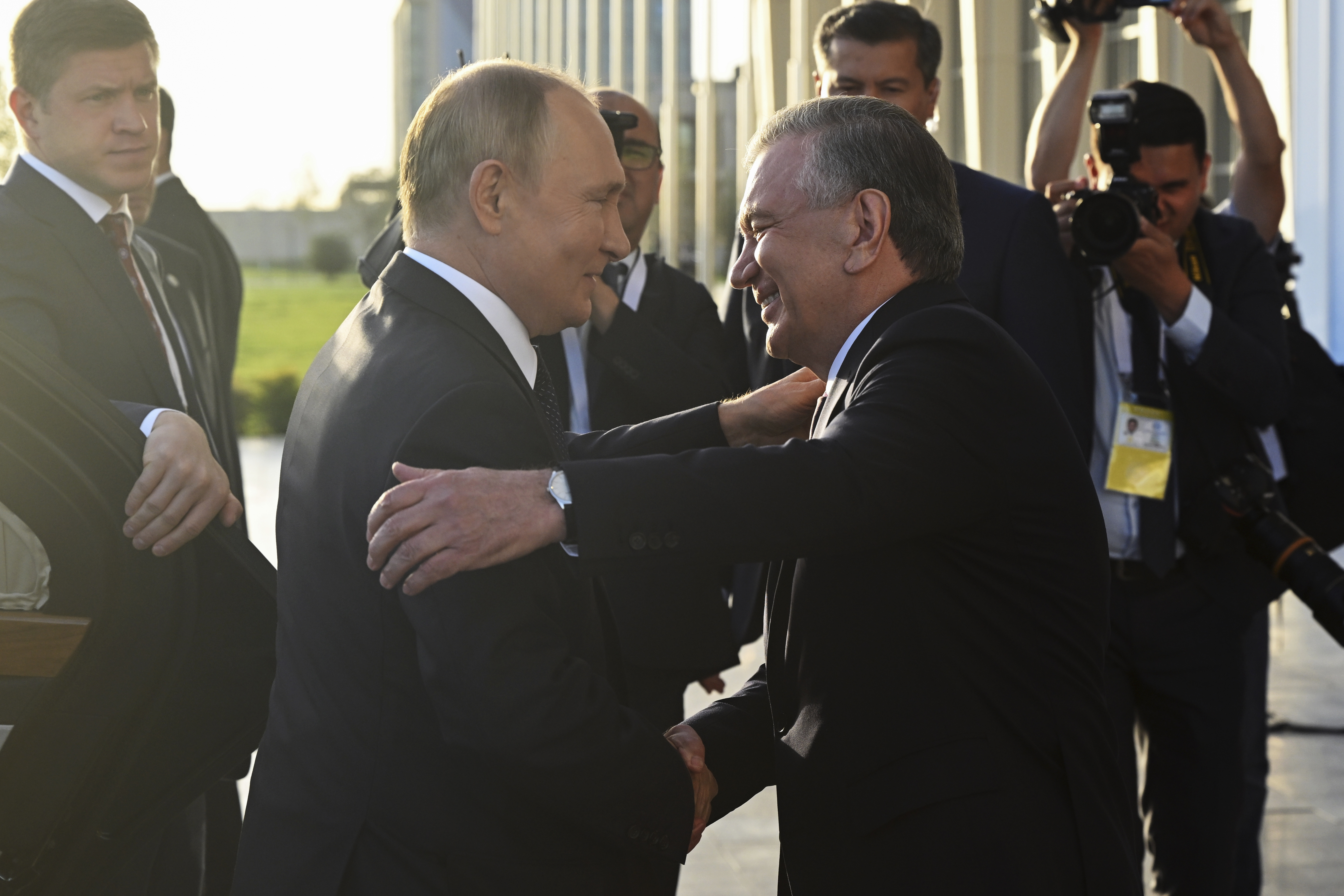 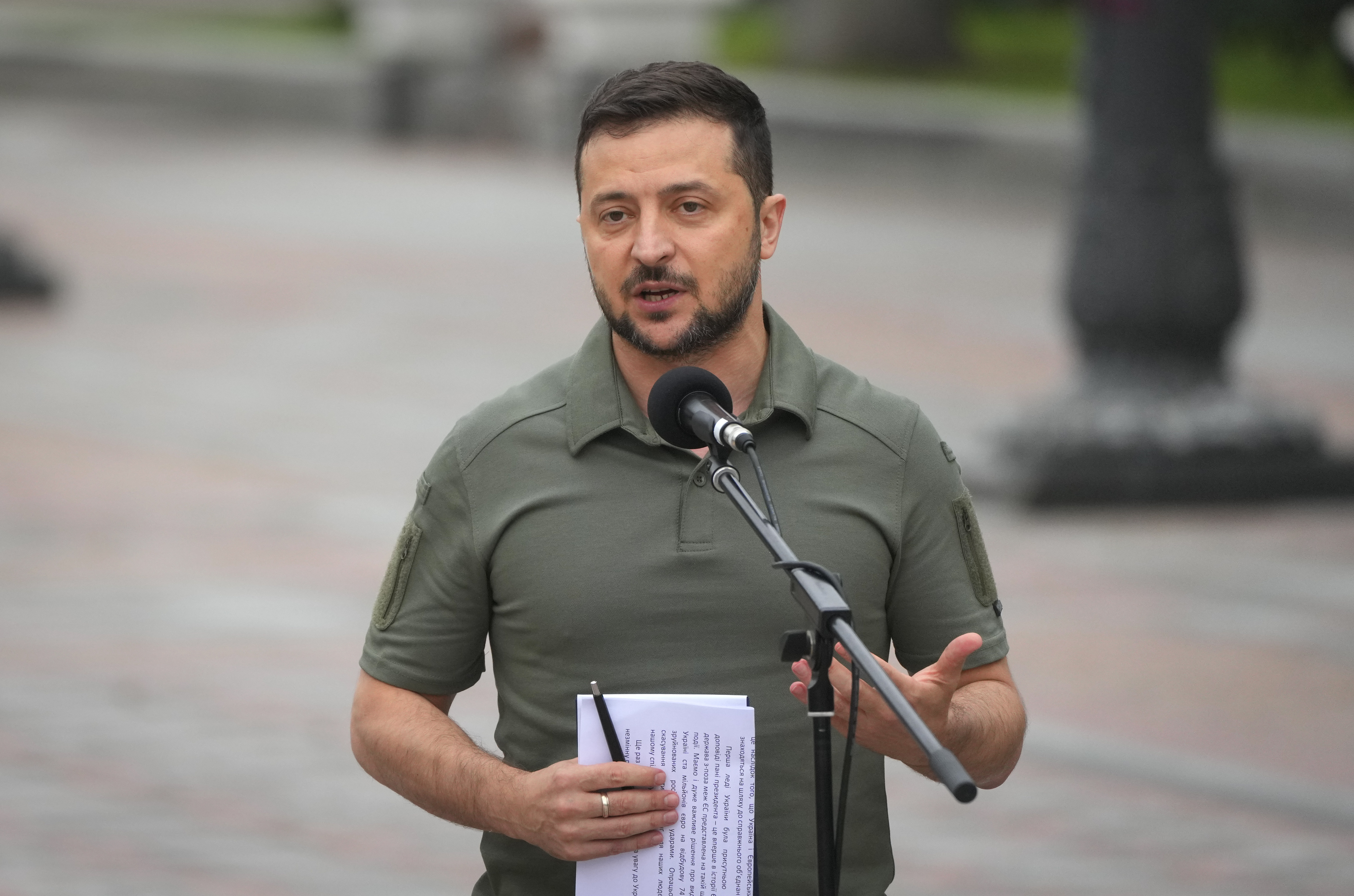 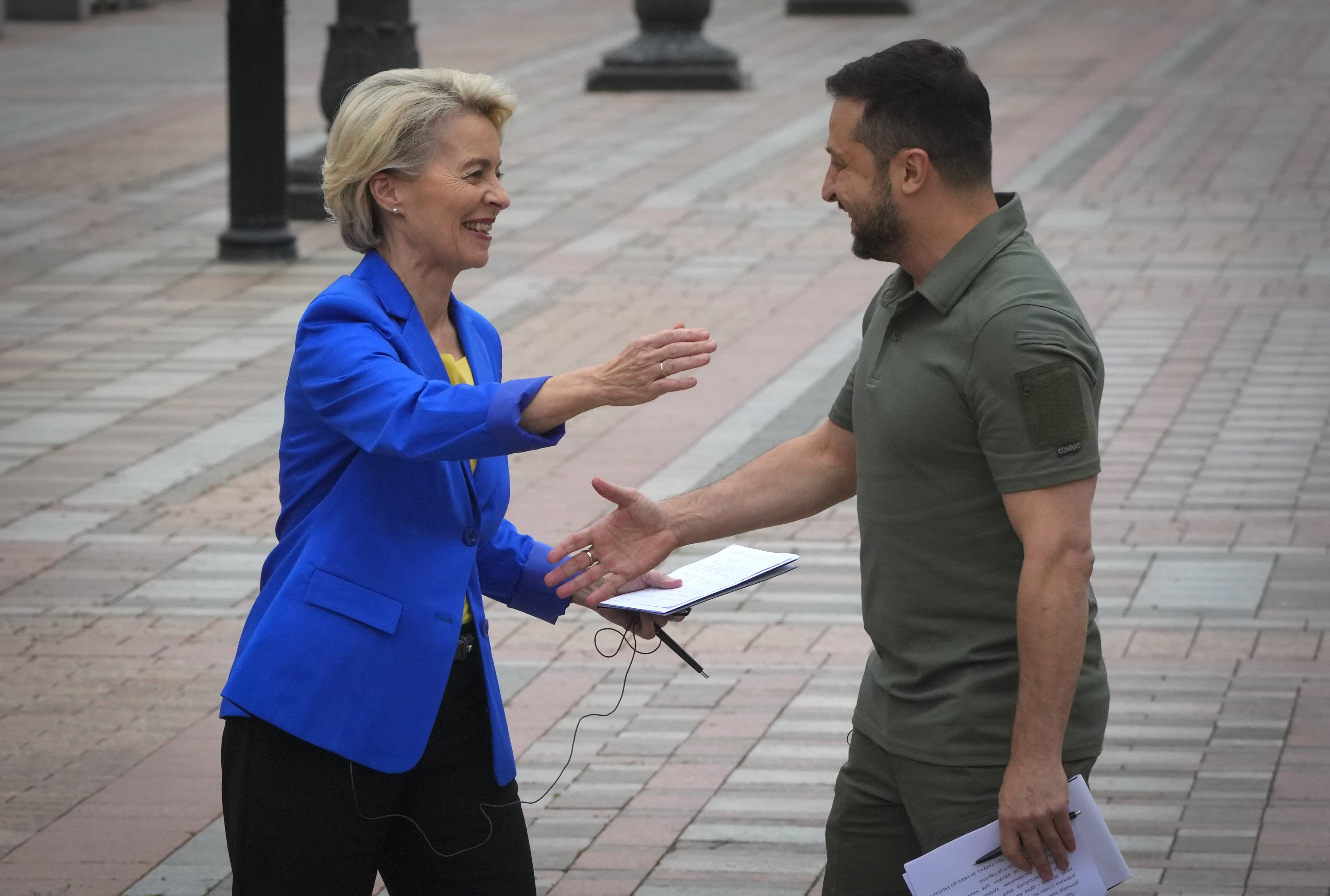 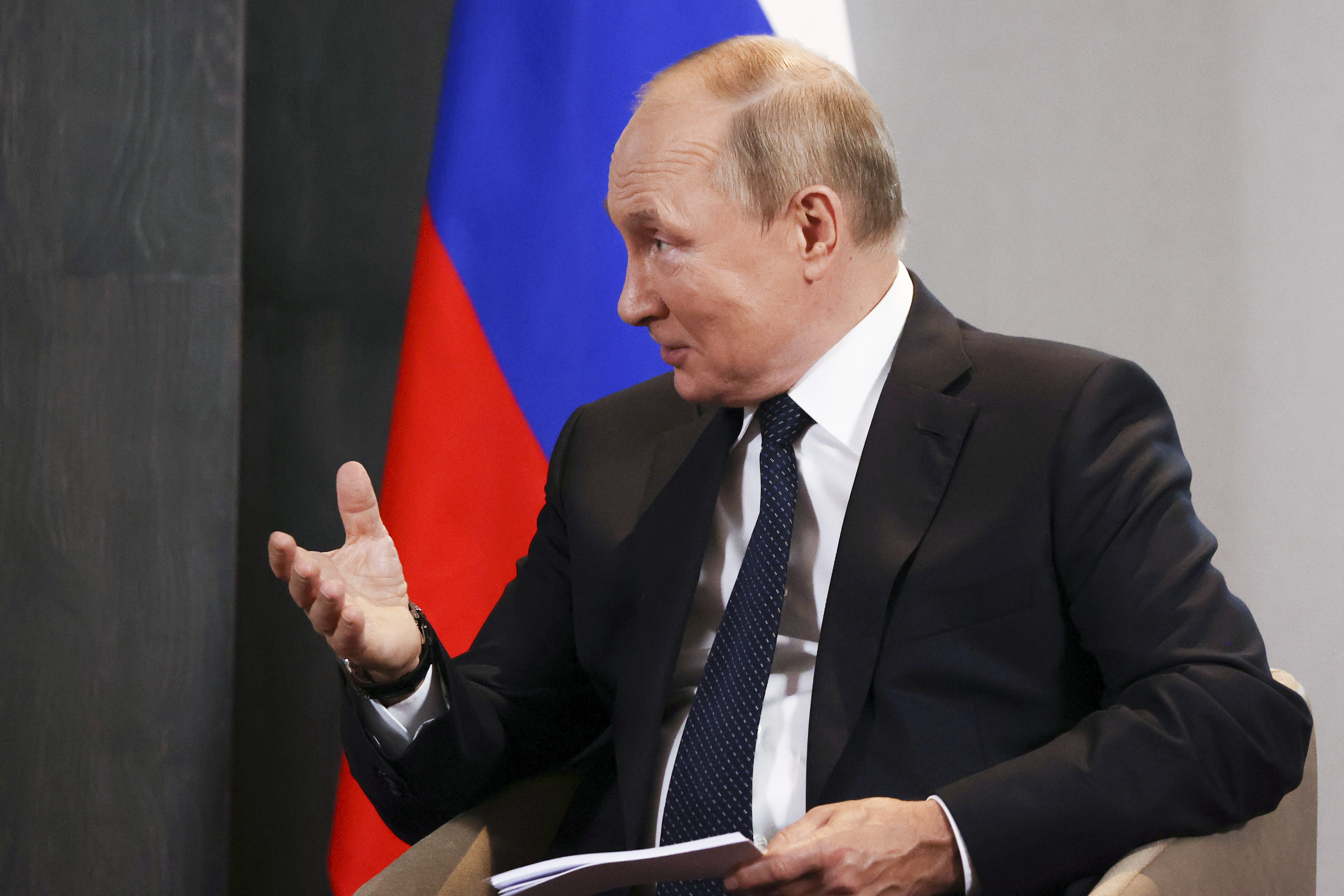 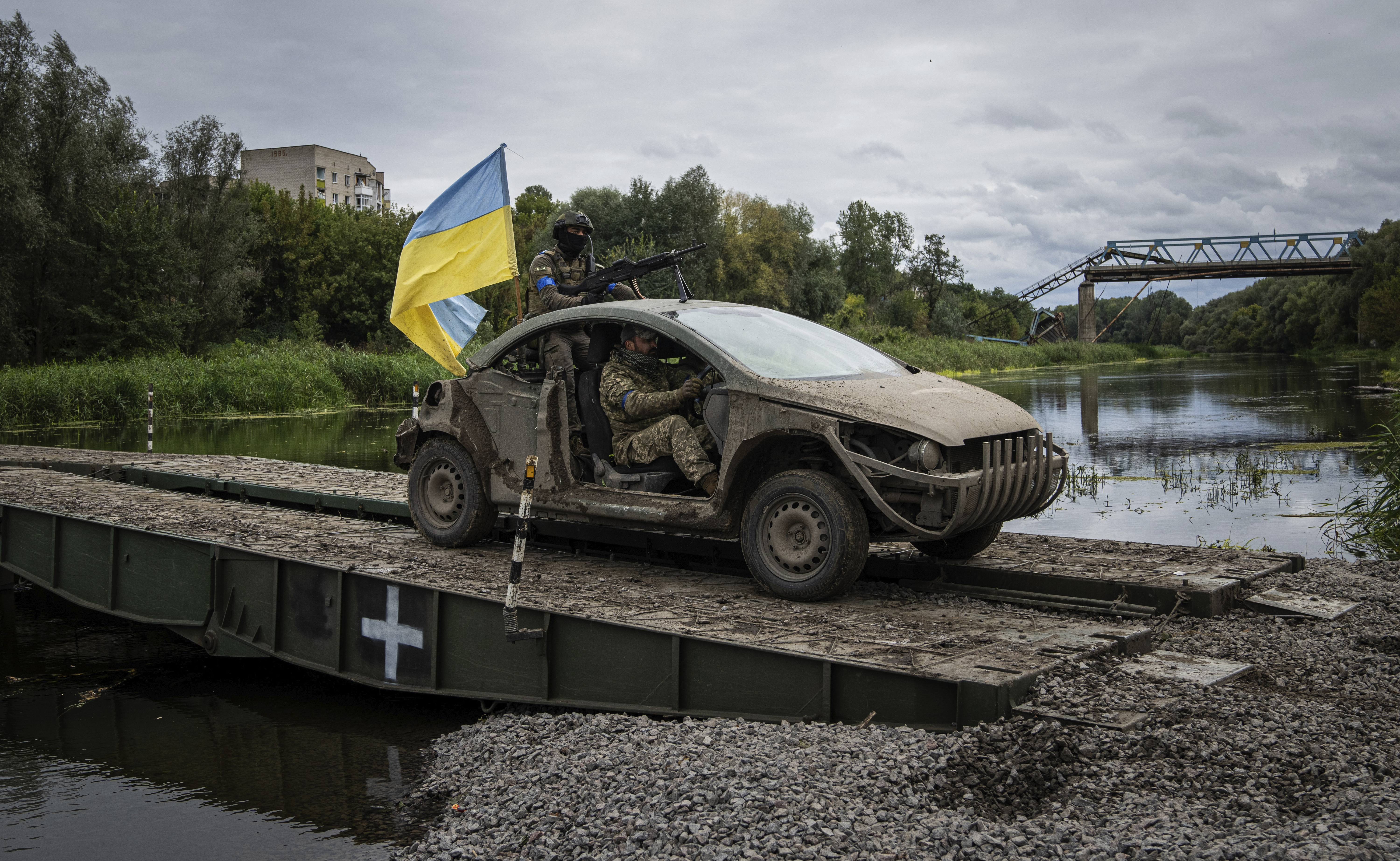 Ukrainian paratroopers drive on the vehicle with Ukrainian flag on the pantone bridge across Siverskiy-Donets river in the recently retaken area of Izium, Ukraine, Wednesday, Sept. 14, 2022. (AP Photo/Evgeniy Maloletka) 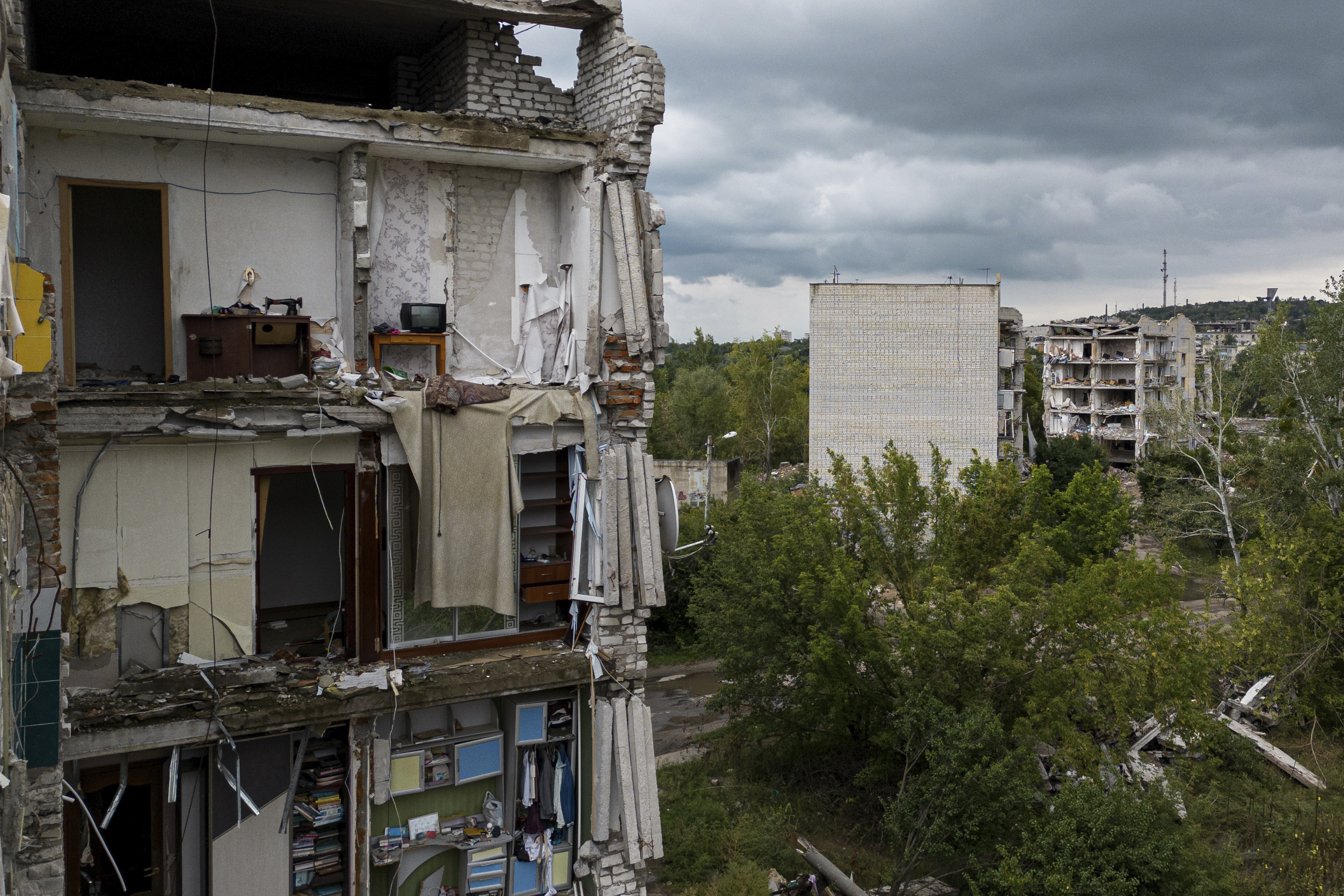