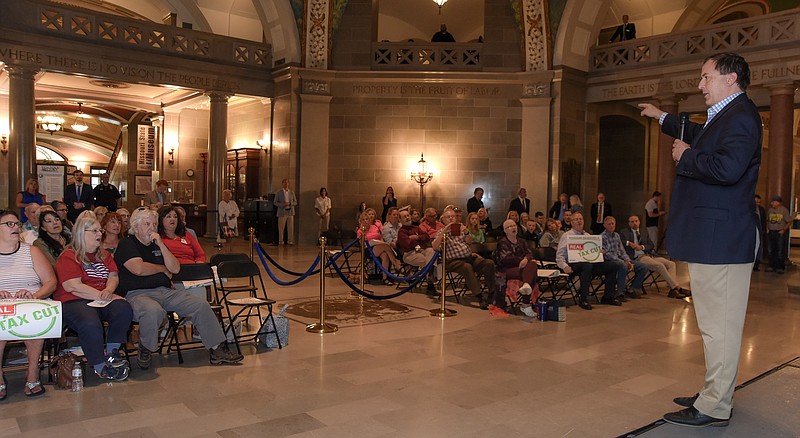 Julie Smith/News Tribune photo: Missouri Secretary of State Jay Ashcroft addressed those gathered Wednesday, Sept. 14, 2022, for the Americans for Prosperity Missouri rally in the Capitol Rotunda. Ashcroft and several legislators spoke about the importance of reducing Missourians' tax burden by going beyond the proposed tax cuts.

Taxpayers from around Missouri gathered Wednesday in the state Capitol to advocate for a "real" tax cut.

As lawmakers kicked off the start of a special legislative session focused on tax cuts and agricultural tax credits, Americans for Prosperity, a libertarian-conservative political advocacy group, hosted a rally in the Capitol to press them for a lower rate than what's been publicly discussed.

In his call for the special session, Gov. Mike Parson proposed reducing the top individual income tax rate from 5.3 percent to 4.8 percent, increasing the standard deduction by $2,000 for individuals and $4,000 for joint filers, and eliminating the bottom income tax bracket. His call also includes extending tax credits for four agricultural programs for at least six years and creating four new agricultural tax credits.

AFP-Missouri Director Jeremy Cady said the state's tax code already guarantees an income tax reduction down to 4.8 percent if general revenue is $150 million more than the highest annual revenue over the past three years.

"We don't want that reconfigured, we want something more," he said.

Cady doesn't argue with the sustainability of the governor's proposed plan but said "if we can afford the 4.8 percent today, we can go to that, but we can also keep the triggers in place."

Some legislators have been receptive to the idea of cutting taxes lower than 4.8 percent, while others want a smaller cut, Cady said.

On the first day of the special session, lawmakers introduced 22 bills in the Senate, some of which go beyond the 4.8 percent rate and take aim at other forms of taxes, such as corporate income taxes.

Cady said the plan AFP is advocating for -- to reduce the top income tax rate down to 4.8 percent today and keep the triggers in place -- is a "good compromise" for lawmakers.

Secretary of State Jay Ashcroft was among the elected officials to address the rally, as did several Republican members of the House.

"Look, we need a tax cut and I don't care if we fight over whether we should lower income tax, or lower the tax on food or lower property taxes," Ashcroft said. "I just want Missouri to lead the nation in having the lowest tax burden on the people."

In addition to tax cuts, Ashcroft, a Republican, advocated for adding an amendment to the Missouri Constitution that would require the General Assembly to ask voters for permission to raise any taxes.

Cady said the goal of the rally was to give Missourians an opportunity to voice their opinions on the tax cut legislators will be working out during the session.

Ron Marshall traveled to the Capital City from Rolla to attend the rally.

Marshall said he has a basic understanding of some of the tax proposals flying around the Capitol, but part of his mission Wednesday was to learn more.

"I like paying lower taxes," he said of the decision to attend.

After the rally, AFP directed taxpayers to lawmaker offices to speak in person.