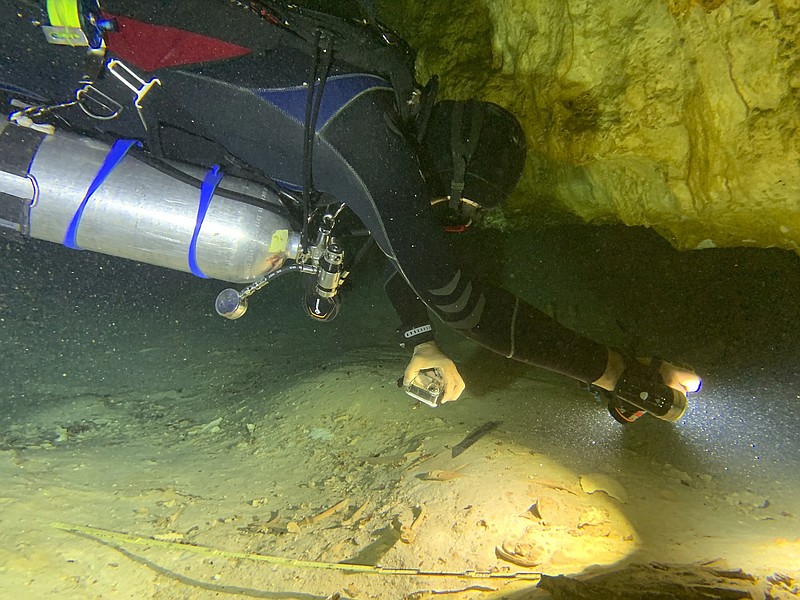 In this photo courtesy of Peter Broger, aquatic archaeologist Octavio del Rio films a pre-historic human skeleton partly covered by sediment in an underwater cave in Tulum, Mexico, Sept. 10, 2022. The cave system was flooded at the end of the last ice age 8,000 years ago, according to an archaeologist and cave diver Octavio del Rio, and is located near where the government plans to build a high-speed tourist train through the jungle. (Peter Broger via AP)

MEXICO CITY (AP) -- A prehistoric human skeleton has been found in a cave system that was flooded at the end of the last ice age 8,000 years ago, according to a cave-diving archaeologist on Mexico's Caribbean coast.

Archaeologist Octavio del Rio said he and fellow diver Peter Broger saw the shattered skull and skeleton partly covered by sediment in a cave near where the Mexican government plans to build a high-speed tourist train through the jungle.

Given the distance from the cave entrance, the skeleton couldn't have gotten there without modern diving equipment, so it must be more than 8,000 years old, Del Rio said, referring to the era when rising sea levels flooded the caves.

"There it is. We don't know if the body was deposited there or if that was where this person died," said Del Rio. He said that the skeleton was located about 26 feet underwater, about one third of a mile into the cave system.

Some of the oldest human remains in North America have been discovered in the sinkhole caves known as "cenotes" on the country's Caribbean coast, and experts say some of those caves are threatened by the Mexican government's Maya Train tourism project.

Del Rio, who has worked with the National Institute of Anthropology and History on projects in the past, said he had notified the institute of the discovery. The institute did not immediately respond to questions about whether it intended to explore the site.

He stressed that the cave -- whose location he did not reveal because of a fear the site could be looted or disturbed -- was near where the government has cut down a swath of jungle to lay train tracks, and could be collapsed, contaminated or closed off by the building project and subsequent development.

"There is a lot more study that has to be done in order to correctly interpret" the find, Del Rio said, noting that "dating, some kind of photographic studies and some collection" would be needed to determine exactly how old the skeleton is.

Del Rio has been exploring the region for three decades, and in 2002, he participated in the discovery and cataloguing of remains known as The Woman of Naharon, who died around the same time, or perhaps earlier, than Naia -- the nearly complete skeleton of a young woman who died around 13,000 years ago. It was discovered in a nearby cave system in 2007.

President Andrés Manuel López Obrador is racing to finish his Maya Train project in the remaining two years of his term over the objections of environmentalists, cave divers and archaeologists. They say his haste will allow little time to study the ancient remains.

Activists say the heavy, high-speed rail project will fragment the coastal jungle and will run often above the fragile limestone caves, which -- because they're flooded, twisty and often incredibly narrow -- can take decades to explore.

Caves along part of the coast already have been damaged by construction above them, with cement pilings used to support the weight above.

The 950-mile Maya Train line is meant to run in a rough loop around the Yucatan Peninsula, connecting beach resorts and archaeological sites.

The most controversial stretch cuts a more than 68-mile swath through the jungle between the resorts of Cancun and Tulum.

Del Rio said the route through the jungle should be abandoned and the train should be built over the already-impacted coastal highway between Cancun and Tulum, as was originally planned.

"What we want is for them to change to route at this spot, because of the archaeological finds that have been made there, and their importance," Del Rio said. "They should take the train away from there and put it where they said they were going to build before, on the highway ... an area that has already been affected, devastated." 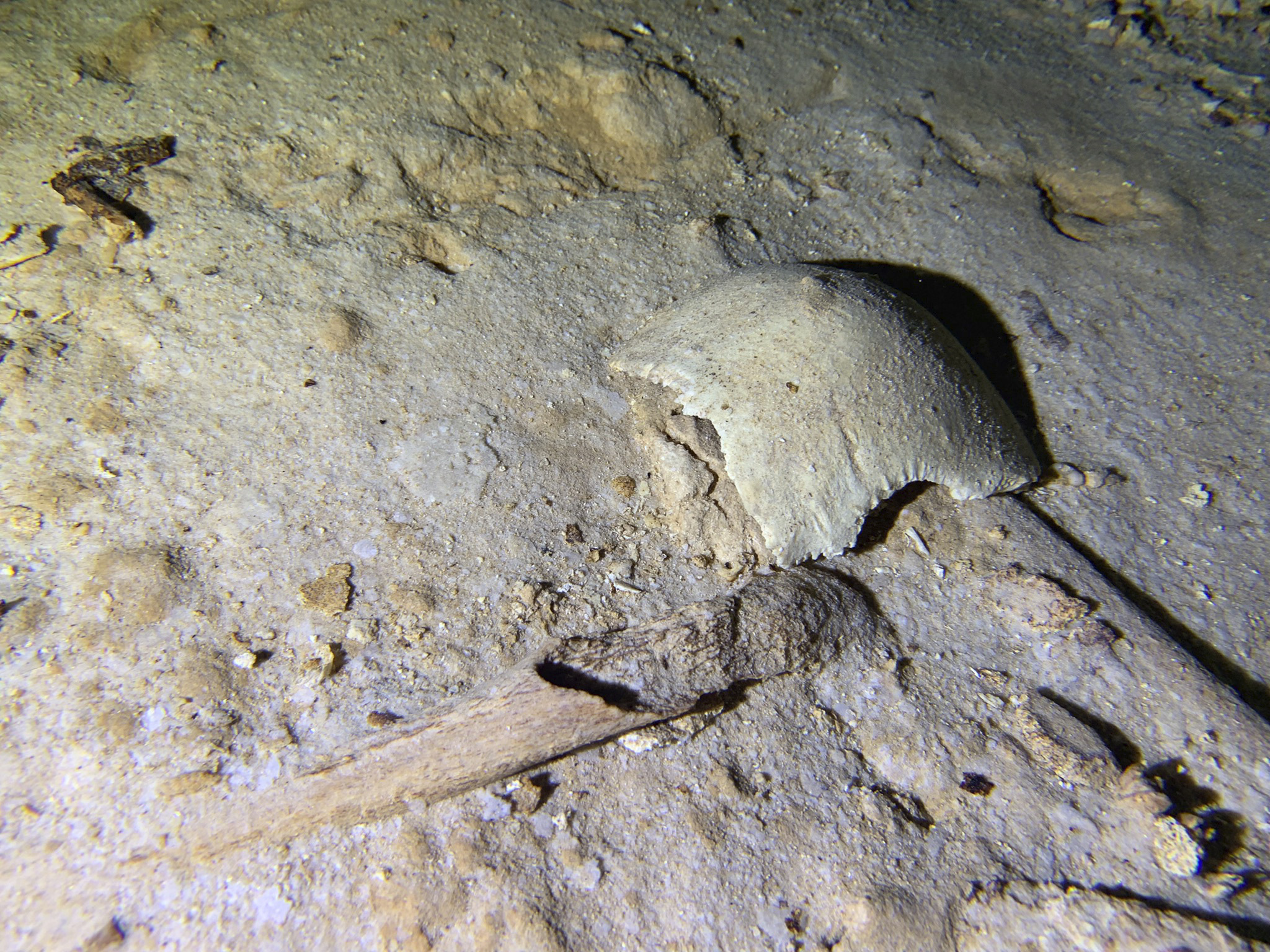 In this photo courtesy of Octavio del Rio, shows fragments of a pre-historic human skeleton partly covered by sediment in an underwater cave in Tulum, Mexico, Sept. 10, 2022. The cave system was flooded at the end of the last ice age 8,000 years ago, according to an archaeologist and cave diver Octavio del Rio, and is located near where the government plans to build a high-speed tourist train through the jungle. (Octavio del Rio via AP)