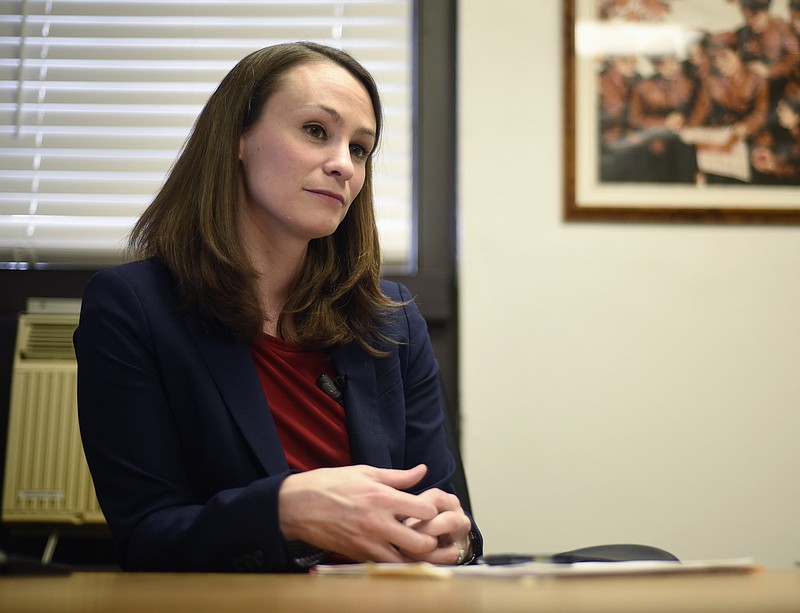 FILE - In this Feb. 13, 2017, file photo, Missouri's then first lady Sheena Greitens sits at her desk for an interview in Columbia, Mo. (Luke Brodarick /Missourian via AP, File)

Former Missouri First Lady Sheena Greitens says she fully complied with a massive public records request for her work emails by a conservative news organization that once employed her ex-husband — and that it produced no evidence of political collusion.

In April, a reporter from Just the News filed an open records request with the University of Texas, where Sheena Greitens works as a professor. Her ex-husband, former Missouri Gov. Eric Greitens, briefly worked for the company that owns Just the News before he launched a campaign for U.S. Senate in 2021.

The records request asked for any and all emails to and from Sheena Greitens over a 15-month period including, but not limited to, “any contact she had with Karl Rove and anyone associated with the U.S. Senate, U.S. Senate campaigns or political consulting firms in Missouri, Texas or Washington, D.C.”

A month prior to that request, Sheena Greitens had filed a sworn affidavit in a child custody case accusing her ex-husband of “unstable and coercive” behavior that included physical violence to their children.

Eric Greitens vehemently denied the accusations and responded by accusing his ex-wife of conspiring with his political enemies to short-circuit his campaign for U.S. Senate — singling out Rove and Senate Minority Leader Mitch McConnell.

In July, Just the News narrowed its request down to focus on emails involving specific people, including Rove, Sheena Greitens’ attorney and Eric Greitens’ former campaign manager. The request also asked for certain keywords to be included in the records request, including “McConnell,” “abuse” and “NRSC.”

On Aug. 3 — the day after Eric Greitens lost his bid for the GOP U.S. Senate nomination — the university informed the reporter that there were no records responsive to the revised request.

“I am aware of Mr. Greitens’ relationship with Just the News,” Sheena Greitens said in an email to The Independent. “I assume that this request was prompted by Mr. Greitens, and is in furtherance of his false narrative surrounding my affidavit filed on March 21.”

She said the records request, “produced no evidence of political collusion, because none occurred.”

John Solomon, founder of Just the News and a former Fox News contributor, said there was absolutely no coordination with Eric Greitens. He said the request was inspired by a statement he received from Karl Rove acknowledging that he had some contact with Sheena Greitens before she filed the March affidavit.

Rove, a longtime Republican political consultant, also teaches at the University of Texas.

“That’s the sum total of it,” he said, “and thus far the original search terms we used came back with no responsive documents. I don’t know if we’ll do another.”

Late last month, a Boone County judge granted Sheena Greitens’ request to move the child custody dispute with her ex-husband from Missouri to Texas. The ruling remains sealed, however, blocking public access to details on whether the judge believed Sheena Greitens’ allegations of abuse.

Both the Kansas City Star and Associated Press have filed motions with the court seeking to unseal the record in the case. In the meantime, several conservative news sites with connections to Eric Greitens, including Just the News, have reported details from the judge’s sealed order.

A pair of hearings on this issue are scheduled for next week.

This isn’t the first time Solomon has delved into the Greitens saga.

Gardner’s office was found to have purposefully violated the Sunshine Law by ignoring Solomon’s request and then intentionally refusing to respond to the lawsuit seeking compliance with the law.

The case ultimately made its way to the Missouri Supreme Court, which declined to hear a last-ditch appeal by Gardner.

“After three years of fighting, Kim Gardner’s office did finally produce some records to our client, John Solomon, in response to his Sunshine Law request,” said David Roland, director of litigation at the libertarian Freedom Center of Missouri. “We are currently reviewing the production for completeness.”

Eric Greitens resigned from office in 2018 while the legislature was considering impeachment. He was facing a felony charge stemming from allegations that he threatened to release a nude photograph of the woman — taken while she was blindfolded and her hands were bound — if she ever spoke publicly about the emotionally and physically abusive relationship.

Among those who Solomon included in his request were Eric Greitens’ alleged victim and her ex-husband; the ex-husband’s attorney; billionaire and political donor George Soros; two former state representatives; several individuals in the low-income housing tax credit industry; and newspaper publisher Scott Faughn.