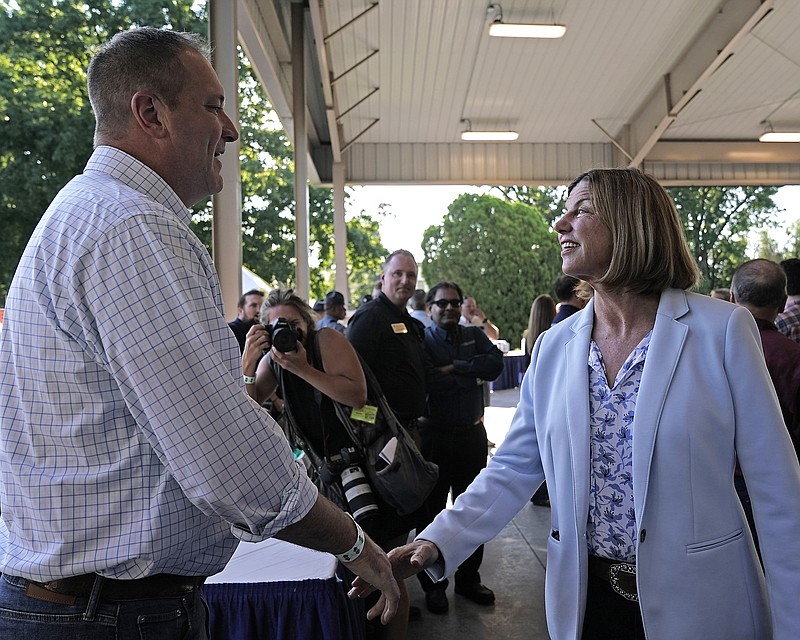 Along with leaves turning colors, the fall in even-numbered years often features political campaigns sparring over who is and is not willing to debate. And this year, that biennial squabble is between the candidates seeking Missouri's open U.S. Senate seat.

Attorney General Eric Schmitt, the Republican nominee, slapped first, with a tweet Tuesday accusing Democratic candidate Trudy Busch Valentine of "refusing to debate." Valentine's campaign responded with a statement that she had not accepted or rejected any invitations to appear on stage with Schmitt.

And thus far only Valentine has agreed to take part in what would be the first forum of the campaign, a debate before the assembled publishers and editors of the state's newspapers at the Missouri Press Association's annual convention.

The forum is scheduled for 1:45 p.m. Sept. 16. It is not televised. The association invites all candidates who will be on the November ballot so invitations have been sent to, and accepted by, Libertarian Party nominee Jonathan Dine and Constitution Party candidate Paul Venable, association executive director Mark Maassen said.

"At this time, we are planning to go forward, yes, with the candidates who say they will participate," he said.

Valentine, heir to a share of the Anheuser-Busch beer fortune, is trained as a nurse and is making her first political race. She won a narrow victory in the Democratic primary in August.

Valentine's campaign has been in contact with the association, Maassen said. On Wednesday, the campaign committed her to taking part, he said.

There are representatives of the association in contact with the Schmitt campaign to get an answer, he said.

"I have gotten less of a positive response from the Schmitt campaign," Maassen said.

Jacob Long, spokesman for Valentine's campaign, said Wednesday afternoon she plans to be on hand for the press association forum.

"We plan to participate in the Missouri Press Association and debate, and have every reason to believe and expect Eric Schmitt will be able to join us in this traditional Senate debate," Long said.

Schmitt's campaign has not responded to inquiries from the Independent about participation in the association debate.

In his statement on Twitter, Schmitt accused Valentine of ducking him.

"Missourians will not be surprised that The Heiress Valentine is refusing to debate because they know her extreme positions only connect with a small inner circle of liberal elites, and not Missouri families statewide who are struggling under the disastrous Biden-Schumer economic policies she supports," Schmitt tweeted.

That statement, Valentine spokesman Jacob Long said in a news release, "is nonsense."

"We fully expect and look forward to an opportunity to debate Eric Schmitt on the issues that matter most to Missourians," Long said. "We've received a number of debate invitations and are actively reviewing all of them. That includes ongoing discussions with other potential debate hosts which Schmitt has not yet accepted. We have rejected no debate invitations."

The St. Louis Post-Dispatch on Tuesday reported the Schmitt campaign is accusing Valentine of declining an invitation to debate on television in a forum hosted by Nexstar, which operates stations in the state's three largest media markets, Kansas City, St. Louis and Springfield.

But Audrey Prywitch, vice president of news for the company's St. Louis stations, told the newspaper Valentine has neither accepted nor declined the invitation.

Prywitch could not be reached immediately Wednesday for an update.

Along with the Senate candidates, the Missouri Press Association will host a forum for the three candidates for state auditor – State Treasurer Scott Fitzpatrick, the Republican nominee, former state Rep. Alan Green, the Democratic candidate, and Libertarian John Hartwig.

All three have accepted, Maassen said.

Association leadership will have to decide whether to go ahead if both major party candidates decline, he said. The debate may be held with empty podiums representing the candidates who are not there, he added.

"Missouri Press is optimistic that the U.S. Senate Forum will take place next week," Maassen said. "Similar forums featuring statewide candidates have been hosted by MPA since 1988."