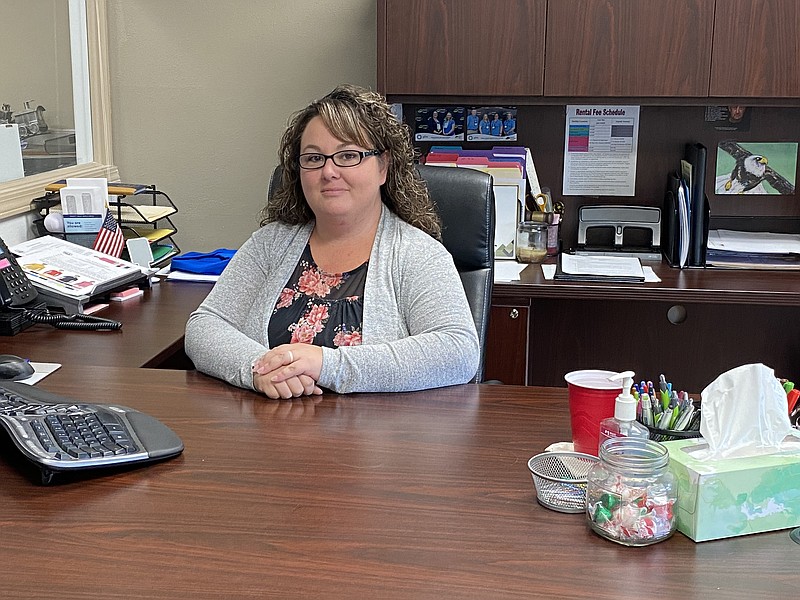 Anakin Bush/For the News Tribune Rachel Anderson has been the city clerk for Holts Summit for the past three years. She said her favorite aspect of being a city clerk is being involved with things that affect people individually.

For Rachel Anderson, being a city clerk was never really in her plans.

But the opportunity presented itself to her. Now she has been a city clerk for 10 years, with the past three being at Holts Summit.

"It was a whole new ball game to me," Anderson said. "I didn't know much of what I was walking into, and I kind of fell in love with it."

She said her favorite aspect of being a city clerk is being involved with things that affect people individually. Anderson likes to have input and provide guidance for services and impacts that will directly help people.

Anderson's previous city clerk position was at a smaller town and allowed for more one-on-one interactions, but she doesn't get as much of an opportunity for that in Holts Summit.

As city clerk, she wears a variety of hats. She serves as the human resources contact, allowing for one-on-one contact with city employees.

Anderson is also the general accountant for Holts Summit. With this position, she takes care of bookkeeping and daily transactional duties.

She also directly deals with the Board of Aldermen. She ensures the agendas are in order and the Board has all the information it needs.

Anderson also drafts all the bills and resolutions that are presented to the Board. She had no experience drafting bills or resolutions prior to the city clerk position, so she said that was a learning experience.

Anderson spends a lot of her time researching for bills and resolutions. She often looks at and reaches out to nearby cities of similar sizes to see how they handled an issue.

"I don't like to recreate the wheel a whole lot, so I'll generally try to find something similar out there and make it fit," Anderson said.

She said things are always changing with local government, which can some things difficult. Sometimes she has research completed, but then the law changes and requires more research.

Anderson said one key aspect of succeeding as a city clerk is being well organized and keeping a calendar with reminders to stay on task.