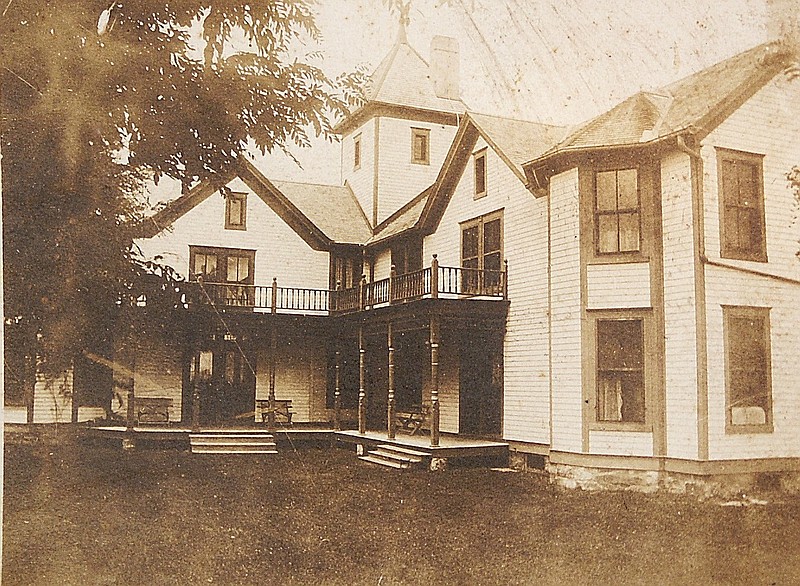 Submitted photo The Gill home "Edgewood" in Readsville, as seen in the section from 125 years ago. A barn party was hosted here on October 15th in 1897.

Mr. Charles A. Patton has just opened in his new building the most complete book and stationary establishment to be found in Central Missouri. He solicits from the public an examination of his immense stock.

Local Short Stops. It is all important that every citizen should register...If you want to be happy, subscribe to your local paper. ...Hoop-skirts have disappeared entirely from the Paris streets and have, for a time at least, been regulated to the shades which contain the Dunstable bonnets and other fashion fripperies of the past.

The Telegraph acknowledges receipt of an invitation from Mr. and Mrs. James T. Gill, to attend a barn party at their home, Edgewood, in Readsville on Friday, October 15, at 7:30. Barn parties are now considered swell affairs in Kentucky and as this excellent gentleman and his wife are the ones to introduce the fad in Callaway, we predict quite a number in the near future.

(From advertisement) Dentistry At Reduced Rates. A full set of Best Teeth for $8. Teeth extracted without pain, 25c. Amalgam, silver, cement or enamel fillings 50c to 75c. Gold fillings $1.50 up to $5.00. Other work in proportion. These special prices are for CASH only and for the next 30 days. W.S. Dedman, Dentist.

Champion Hog Caller. Charles H. Munford, of Williamsburg, is the champion hog caller of Callaway County. He won at the Fulton street fair in competition against sixteen other men. The volume of his voice and the use he made of it won him the decision of the judges. Reserve champion went to Richard Scruggs of Millersburg. He threw grain out into the crowd as he gave range to his voice, making the performance thoroughly realistic. Others in contest were George P. Muir, L.E. Sparks, W.M. Drinkard, Charles Frey, L.B. Sutter, E.A. McCray, J.L. Vandevier, J.O. Erwin, Bourne Tyler, W.S. Cherry, R.T. Moore, H.H. Watson and Gooch Bartley. Judges were Sisera Threlkeld, J.L. Cole and Robert Berry. Col. M.V. Harrison presided and helped to keep the crowd laughing. A prize of a $5 meal ticket given by Pearre's Café was awarded the winner.

Fortune Teller Turned Gambler. Frank Burns with the Slegrist and Silbon carnival in Fulton last week, paid $50 in the city police court for operating a gambling house. Burns was turned in by Zenola Randall, a fortune teller of the same company. The carnival management ran an attachment on the woman's trunks to collect money they had advanced her. This angered her and caused her to have Burns arrested. He operated a poker and crap game tent and had succeeded in escaping detection. Burns went before Police Judge Hale and offered to plead guilty and was told that court is not held on Sunday. Burns declared the carnival was waiting for him so he arranged with the police to enter a plea of guilty for him Monday. He wrote a confession, paid the fine and left town with the carnival.

Tuesday To Be A Meatless Day For Many Fultonians. Institutions and housewives to adopt Truman's plan. On the first Tuesday under President Truman's "Meatless Tuesday" program to help win the peace, found many Fultonians planning to do without meat and others said they plan to start next week. At the colleges and institutions, almost 100% cooperation is planned. In the homes of a number of Fultonians, housewives are cooperating. Mrs. Richard Hebert said they plan to do without meat each Tuesday. Mrs. B.G.Tutt said that both of her sons, George and Jack, were "all for the food saving program." The restaurant owners who were contacted said they had no final decision.

Miss Mary Nevins, daughter of Mr. and Mrs. J.T. Nevins of New Bloomfield, arrived home from Guam where for the past year she has been assigned as a civilian accountant for the United States Navy. She is visiting her parents and her sister, Mrs. D.M. Cuthbertson of Fulton.

Funeral services will be held 2:00 p.m. Tuesday at the Browning Funeral Home for Walter Frances Willing. He was born May 11, 1897 in Callaway County, son of Henry and Vodie Hall Willing. He married Grace Gathright January 15, 1922. She preceded him in death. Survivors include a brother, Floyd, 3 sisters, 2 sister-in-laws –Mrs. Ora Williams and Mrs. Ruth Hampton, both of this city. He was employed at International Shoe Company and a member of Central Christian Church. He was a veteran of WW1. Rev. Raymond McCallister, Jr. will officiate the burial. Pallbearers are Jerald Bramon, Jr., James Metz, Kenneth Atteberry, Ovid Felkner, Howard Bock and Roy Althiser.

Ready for dinner (from Kimberly Long photo). Members and friends of the Calvary Baptist Church gathered Friday for their annual Chicken and Spaghetti Dinner. Members pitched in on the cooking, prepping and cleaning. Clifford Kemp tends to fried chicken while Rose Galbreath checks the spaghetti and Kimm Lee prepares the plates. They have been constantly busy since the time they opened the church doors.

Anniversary Acknowledgement (from contributed photo). Monday was the anniversary of the first chapter of American Business Women's Association. The Callaway chapter is sixty members strong. They are selling bags of nuts to fund scholarships for students in the county. At a proclamation signing in for the anniversary is Mayor Bob Fisher, Mary Rundus, Pat Brauner, Sharon Holland and Mary Dunavant Deloney.