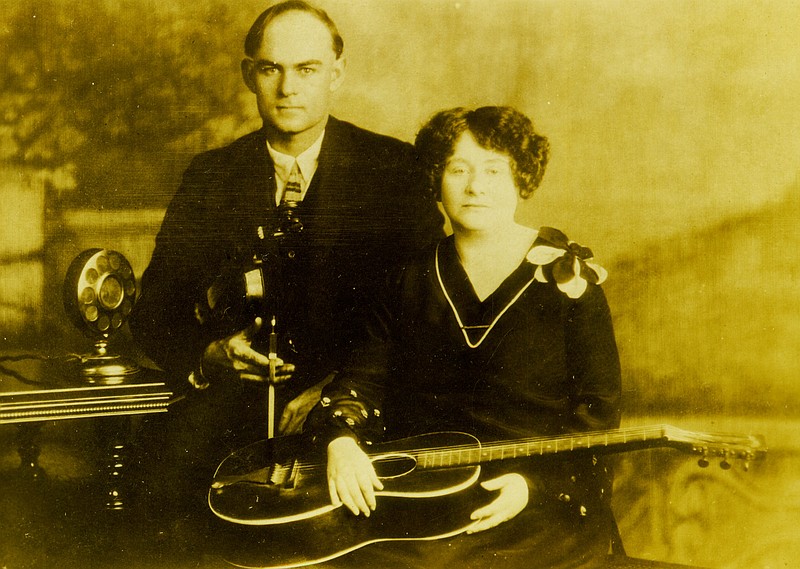 A photograph of Mr. and Mrs. Vee Latty. Their marriage announcement is featured in the 100 years ago section from 1922. (Submitted photo)

Williamsburg News. The cold wave is past and it is as warm and dry as ever. Water is scarce. Some of the farmers are hauling water from the Auxvasse (Creek). Mr. and Mrs. B.G. Grant have returned and will soon go to house-keeping in their handsome new residence west of town. Mrs. R.D. Rood is attending the bedside of her father, Mr. Wilson, in Mexico.

Carrington News. Now is the time to clean out your wells and pray for rain. Several farmers are building new houses. Among them are Messrs. W.O. Sampson and James Henderson. Mr. J.H. Parker is the carpenter. Mrs. John Craghead returned from St. Louis where she purchased her fall and winter millinery. Mrs. Gill has returned home after a visit with her sister, Mrs. Chas. Edwards.

Vinson Benson, 77, of Nine Mile Prairie died. He was one of the old Callaway pioneers and made the overland trip to California three times. His widow is Miss Mattie Allen, sister of Harvey Allen. His widow and married children are among our best citizens.

An equitation class is being organized by Miss Gillian McFall, director of physical education at William Woods. More than 60 students plan to enroll.

Married Saturday afternoon of the Dixie neighborhood were V.V. Latty and Miss Marie C. Bush, daughter of Sam Bush, at the Christian church parsonage on Market Street by the Rev. W. Garnet Alcorn. The couple will make their home in Fulton.

Receipts at Pie Supper $71. Forty Four pies were sold at Sunrise School house Friday night. The money is to be used for the improvement of the school, of which Miss Marie Kemp is the teacher. J.P. Smartwood, auctioneer.

Receipts at Pie Supper $76. Pies were sold at the Hereford School. Miss Gladys McCall was voted the prettiest girl present and a cake going with the votes brought in $16. E.A. McCray, auctioneer.

Receipts at Pie Supper $127.50. Receipts from a pie supper at Calwood School Friday night for 27 pies will be used for school purposes. Special winners include: Miss Lola Dunn, the teacher, won for the sweetest girl, Bob Byrd won for the best "Pop," or Dad present, Miss Betty Dye and Gene Kennedy won for the best matched couple present. The later won a box of matches. Bernard Harrison, auctioneer.

J.E. McDonald Brings In 3 Wolves In One Week. The number of wolves killed in Callaway County so far this year reached 100 Saturday, when J.E. McDonald of Fulton collected $60 in bounties for 2 wolves he killed in the McCredie and Guthrie communities. McDonald is the leading wolf hunter in the county this year, having bagged 7 grown wolves. They netted him $210 in bounties.

Briggs' Opens. "We want to express our thanks and appreciation to our customers in Callaway County and to our employees," said Bob Briggs at the opening of the new Briggs IGA Store Thursday morning. "After all, you don't do something like this alone. Without them we wouldn't be having such a nice opening," he said. Briggs moved across Business Hwy 54 S. to the new 19,000 sq. ft. store. The new location will enable the Briggs to provide better service to customers.

Students Lend A Hand. For the past three years, Mrs. Dorothy Salmons, a staff member at the federally donated foods outlet, Callaway Food Center, has been delivering food to low income families. She now has assistance from Fulton High School students, such as Bill Love, Steve Hill, David Hill and Frank Ferrugia who load the food for delivery.

(A letter to the editor) On the eve of my departure from Fulton, I would like to express my appreciation to the townspeople who helped make the past two and a half years a very memorable experience for my family. Very few soldiers ever get to serve in a duty position away from a military installation ... when this does happen, he is normally treated as an outsider. This is not the case here in Fulton, both my family and I felt that we were part of the community. For that we thank you very much. I would like to thank Westlake's Hardware for the tremendous support that they gave to the (Little League) team with which I was involved. Fultonians, thank you for a pleasant stay in your community. Capt. Henry "Buzz" Kievenaar, WC ROTC Dept.

April Nichole Byrn and David Elwood Backer were married at the Southside Baptist Church. The Rev. Ronald Baker officiated. Parents of the couple are Bill and Nancy Byrn of Queen City, Bill and Debbie Herring of Kingdom City and Elwood and Alice Backer of Fulton. Grandparents of the bride are Jimmy and Wanda Byrn of Downing and Marion Stott of Memphis.

Elvira Carabina Zickos, 95, of Fulton passed away Oct. 2, 1997. A native of Albania, she was born Jan. 1, 1902, to Harry and Catarina Talabac Carabina. She married John Zickos of Fulton in 1919.He passed away in 1955. Survivors include one daughter, Margarite Winne of Colorado Springs, CO; one son, Ted Zickos of Seffield, AL; seven grandchildren and 16 great grandchildren. She and her husband worked in The Missouri Café until 1936 and operated the Gem Theater from 1932-1934. In 1936, they began operating Zickos Clothing Store which she ran for nine years after John's death. She was an active member of the First Christian Church in Fulton.

Fulton attorney Joe D. Holt spoke to the Charity Stille Langstaff Chapter of the Daughters of the American Revolution (DAR) at the Ponderosa Restaurant. He discussed the U.S. Constitution. He stated that without the Constitution, such a meeting would not be possible. The Constitution and the Bill of Rights guarantees citizens freedom of assembly and freedom of speech. The most important component, according to Holt, is an active, informed and educated citizenry. DAR distributed materials to local schools and libraries in observance of Constitution Week.