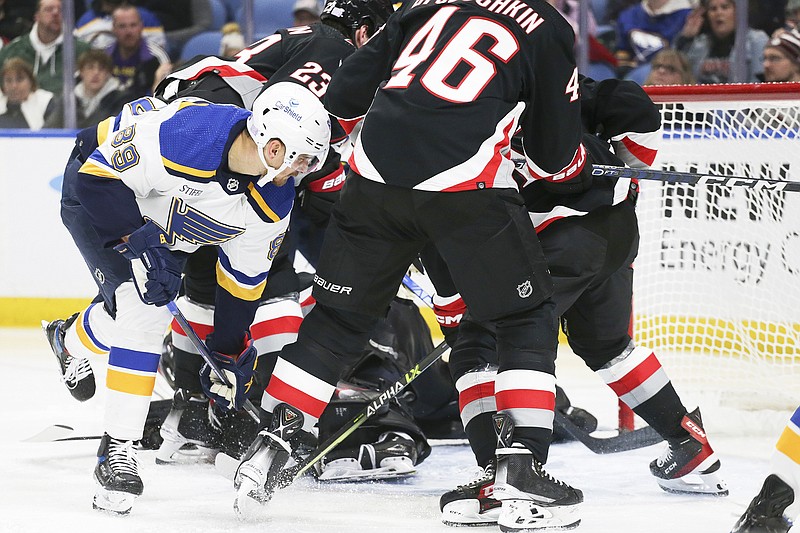 Blues left wing Pavel Buchnevich taps in a goal off a deflection during the second period of Wednesday night's game against the Sabres in Buffalo, N.Y. (Associated Press)

Buffalo followed a 7-2 victory Tuesday at Montreal to win two straight after ending an eight-game skid.

“For us, the last two games, we’ve had contributions from everyone,” Skinner said, referring to what’s changed since the skid.

“It’s a tough league, it’s gonna be tough some nights, and you’re going go through sort of different types of games, different types of adversity, and you just have to battle through that,” he added. “Hopefully now we can keep this one rolling for a bit.”

Minor-league callup Ukko-Pekka Luukkonen stopped 34 shots for his fourth career NHL win, and first since Dec. 16. Getting his second start since Eric Comrie sustained a lower-body injury, Luukkonen’s best save came with 4:24 left in the second period, when he kicked out his right pad to stop Vladimir Tarasenko set up on the doorstep.

Pavel Buchnevich and Brayden Schenn scored for the Blues, and Jordan Kyrou had an assist to extend his points streak to six games (two goals, nine points).

Jordan Binnington stopped 25 shots in his first loss in seven starts, and was denied in his bid to win his 100th career game.

With St. Louis trailing 4-1, Buchnevich scored a second time 6:11 into the the third period, but the goal was disallowed after the Sabres challenged the play for being offside. Replays showed Tarasenko losing possession just before he entered Buffalo’s zone a step ahead of the puck.

The Blues’ seven-game winning streak followed an eight-game skid, with their last loss a 5-1 defeat Nov. 8 at Philadelphia.

The challenge now is not fall into another rut.

“I think you just realize what you’ve just been through and what we did to get out of it. And now you got to stop it right now,” Schenn said. “We’re going to go play two good teams in Florida that are very capable to win hockey games. And the mindset going in there is no easy games and you can’t take your foot off the gas or have letdowns like we did previously in the year.”

A day after Buffalo scored three times in the first 2:13 at Montreal, Skinner opened the scoring 18 seconds into the game.

The Sabres then took control with three goals over an 11-minute span in the second period, and after Buchnevich tied the game with a power-play goal 53 seconds into the frame.

Skinner capped the surge by driving in from the left boards, stick-handling the puck through this legs to avoid Justin Falk, and then going against the grain by back-handing in a shot inside the left post.

Buffalo drew energy from a boisterous Thanksgiving-eve crowd of 17,302, which did the wave and sang along to the Backstreet Boys’ hit, “I Want it That Way,” on the Sabres ’90s night, which also featured the team wearing its retro black-and-red “goat head” jerseys. Fans also chanted “Luuuu,” each time Luukkonen made a big stop.

“Of course you notice it,” Luukkonen said. “I think that’s a big lift for the whole team and we always appreciate that. Most of all, that builds up your confidence.”

On Friday, the Blues play at the Tampa Bay Lightning and the Sabres host the New Jersey Devils.