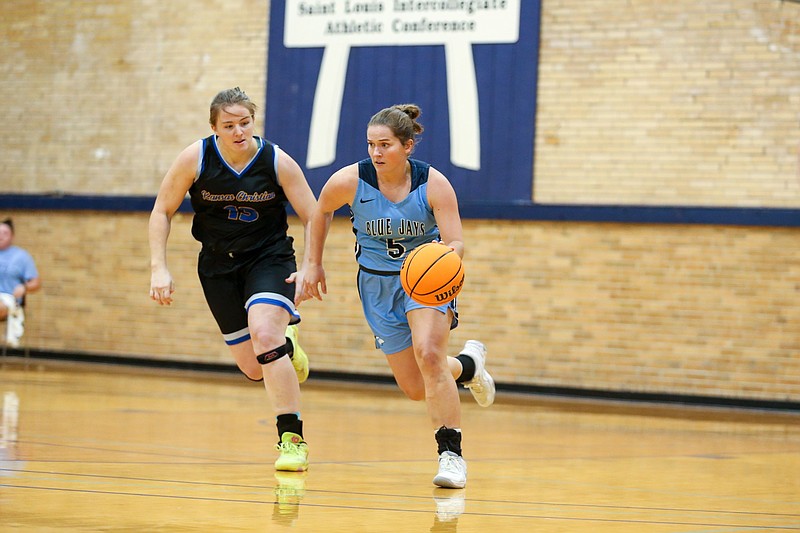 Westminster got off to a quick start with a 3 from Annette Ramirez to take a 3-0 lead to start the game. The Prairie Wolves responded and took a 5-3 lead. The Blue Jays tied it up at the free-throw line, and they were off to the races. The remainder of the first quarter was tight and ended with the Jays taking a 15-13 lead.

Ramirez hit another 3 to start the second quarter and give the Blue Jays an 18-13 lead. They held that lead for the rest of the quarter. Nebraska Wesleyan cut the lead to two with 36 seconds left to play. Aly Bullock hit a 3 with time running out and got the lead back to five points with a halftime score of 28-23 and the Blue Jays on top.

The Prairie Wolves struck first to start the second half with a pair of free throws after a shooting foul was called. Ramirez answered with another 3, her third of the game to that point. The Blue Jays continued to hold off Nebraska Wesleyan early in the third quarter; then they went on a run to take the lead 38-37, their first of the second half and second lead of the game with 2:26 left in the third quarter. The Blue Jays took the lead back at 40-38; the Prairie Wolves tied it at the free-throw line, 40-40. They took the lead 42-40 after a layup at the end of the quarter.

Ramirez tied the game 42-42 to start the final quarter after drawing a foul and making both free throws. Nebraska Wesleyan then went on a 6-0 run to take a 48-42 lead. The Jays cut the lead to two after a Caragan Lockard layup made it 58-56. The Prairie Wolves continued to do damage from the free-throw line, going 8-9 from the line at the end of the game. They won the game by six over the Blue Jays 66-60.

Ramirez led the way with 21 points and six rebounds. She went 4-5 from behind the 3-point arc. Shelby Kurtz had 13 points, four rebounds and three steals.

The Blue Jays will be back in action after the Thanksgiving holiday when they host Washington University in St. Louis at 5:30 p.m. on Dec. 1 from the Historic Gym in Fulton.