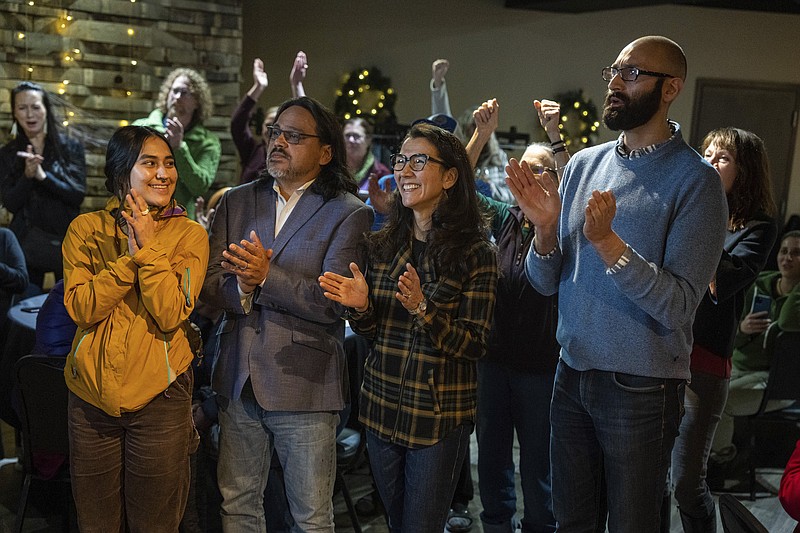 U.S. Rep. Mary Peltola, center, celebrates with her family and supporters as ranked-choice tabulations were announced on Wednesday, Nov. 23, 2022 at 49th State Brewing Company in Anchorage, Alaska. Peltola has been elected to a full term in the House, months after the Alaska Democrat won a special election to the seat following the death earlier this year of longtime Republican Rep. Don Young. (Loren Holmes/Anchorage Daily News via AP)

JUNEAU, Alaska -- U.S. Rep. Mary Peltola has been elected to a full term in the House, months after the Alaska Democrat won a special election to the seat following the death earlier this year of longtime Republican Rep. Don Young.

Peltola defeated Republicans Sarah Palin and Nick Begich, as well as Libertarian Chris Bye in the Nov. 8 election. Results of the ranked choice election were announced Wednesday. Palin and Begich also were candidates in the special election.

"It's a two-year contract," Peltola told the Anchorage Daily News after her victory -- a 55%-45% margin over Palin in the final tabulation round -- was announced. "I will be happy to work for Alaskans again, as long as they'll have me."

Peltola, who is Yup'ik, with her win in August became the first Alaska Native to serve in Congress and the first woman to hold Alaska's House seat. The win also buoyed her fundraising, outpacing those of her rivals in the lead-up to this month's election.

Begich congratulated Peltola in a statement, adding: "Our nation faces a number of challenges in the coming years, and our representatives will need wisdom and discernment as they work to put America on a more sound path. My message to Alaskans is to continue to be involved and engaged."

Peltola embraced Young's legacy as she sought the two-year term and was endorsed by his daughters, one of whom presented her with a bolo tie of Young's at an Alaska Federation of Natives conference where Peltola was treated like a rock star. Young held the seat for 49 years.

"Now, I'm a real congressman for all Alaska," she said. Young often referred to himself that way. Peltola has described his legacy as one of bipartisanship and building support for Alaska interests in Congress.

Peltola was a state lawmaker from the small rural hub community of Bethel for 10 years, ending in 2009. She surprised many with her fourth place finish in the June special primary, in which she emerged from a field of 48 candidates that included current state and local officeholders. That finish was enough to send her to the special election.

During the campaign, she cast herself as a coalition builder, emphasized a desire for more civility in politics and sought to stay out of the sniping between Palin and Begich. Peltola, who most recently worked for a commission whose goal is to rebuild salmon in Alaska's Kuskokwim River, raised concerns with ocean productivity and cited a need to preserve struggling fisheries.

She also stressed her support of abortion rights.

During a speech in October, she talked about the need for unity and lamented what she said have become pervasive messages in politics "about hate and fear and self-pity. And yes, those resonate, those are compelling motivators. But they're destructive, they're acidic, they tear us down."

She said her priorities for the new term included committee assignments and "working very hard on getting our inflation rates down, our shipping costs down, getting costs down for working families and all Alaskan households." 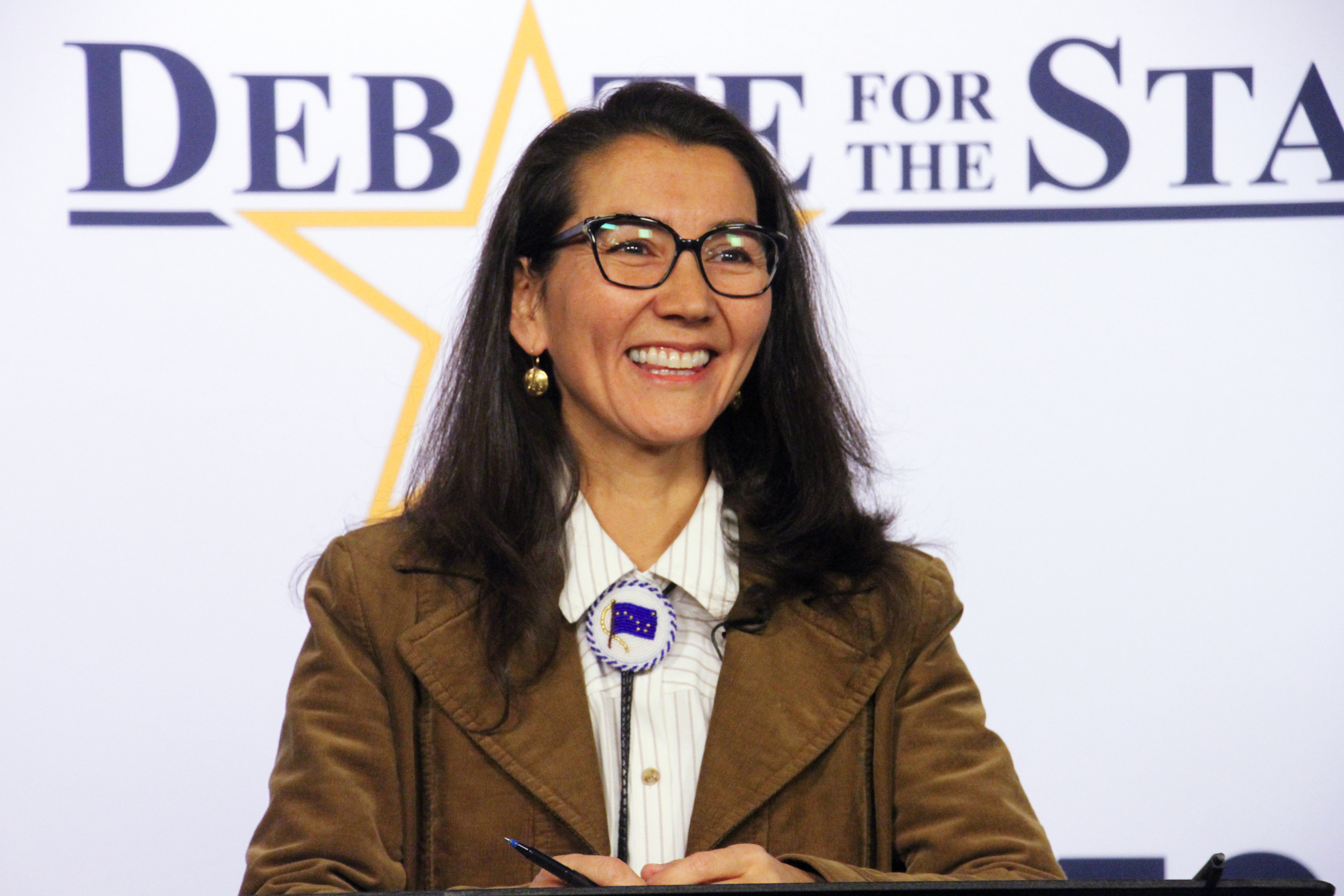 FILE - U.S. Rep. Mary Peltola, D-Alaska, smiles before a debate for Alaska's sole U.S. House seat on Oct. 26, 2022, in Anchorage, Alaska. Peltola was elected to a full term in the House on Wednesday, Nov. 23, months after the Alaska Democrat won a special election to the seat following the death earlier this year of longtime Republican Rep. Don Young. (AP Photo/Mark Thiessen,File) 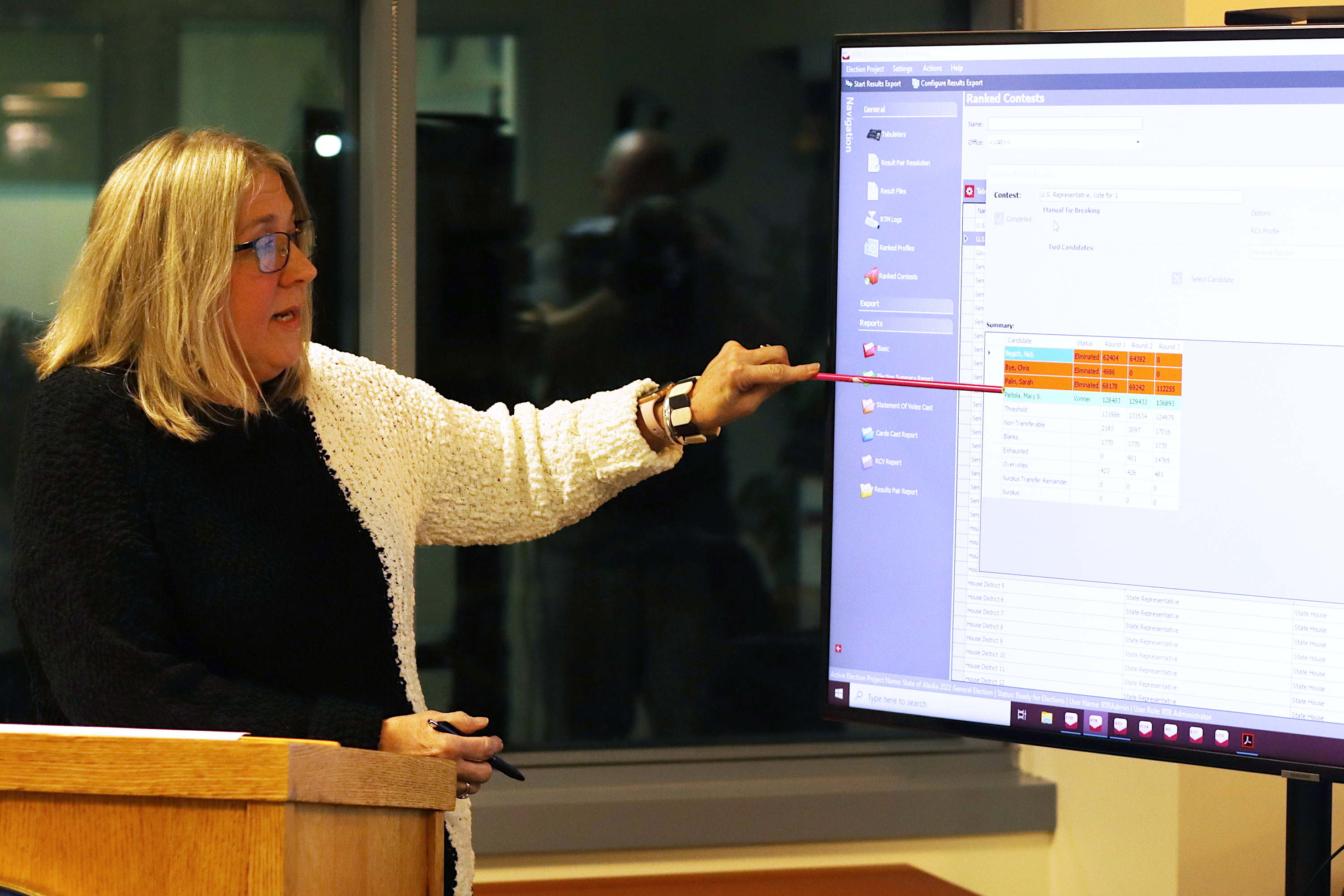