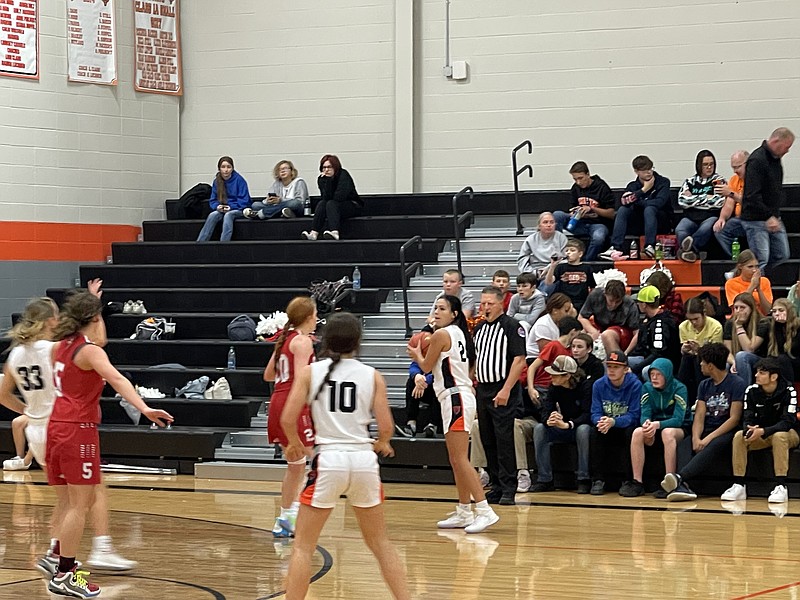 After just the first quarter, the Lady Wildcats had already surpassed their total points in their first game when they scored 19. New Bloomfield was up 22-11 after the first quarter and couldn't have asked for a better start.

"We got off to a pretty good start," New Bloomfield coach Brett Craighead said. "We thought we hit some shots. We fouled them too much; kept them in the game because I don't think they hardly missed a free throw all night long."

More of the same happened in the second quarter. However, the Lions scored 19 points, with 14 coming from free throws.

"It kept them in the game," Craighead said. "I think we could've gotten up by more; maybe then they wouldn't have hung around. But you let a team hang around in the game; it makes you go do other things. And I'm glad we hit shots when we needed to."

While Calvary Lutheran put more points on the board, the Lady Wildcats' offense continued to fire on all cylinders. Seven of New Bloomfield's eight players scored and notched at least two points.

Macie Abbott led the charge offensively in the second quarter for New Bloomfield; she scored six points, including four from layups. Abbott worked around the glass to keep Lady Wildcats' offensive possessions going and collected a rebound too.

Brinley Dysart -- who left the game with an injury in the second half -- was the Lady Wildcats' defensive leader, recording two rebounds and steals apiece.

At halftime, New Bloomfield was up 47-30, which allowed room for error in the second half.

"I thought we really moved the ball offensively," Craighead said. "We got some good shots. Good looks. But everything looks better when you're hitting shots, and we did that first half."

The Lady Wildcats continued to hit their shots in the second half, but only a couple of individuals were scoring them instead of it being a team effort.

In the third quarter, the player scoring most of New Bloomfield's points was Avery Nichols, who scored the Lady Wildcats' first eight points of the second half. Nichols finished the game with a floor-high 21 points and four 3-pointers.

"She can do that," Craighead said. "And she's gonna have to do that for us to be successful. I was pretty pleased with how she played. I mean, she kind of got everybody where we needed to be, and she made some decisions on her own."

Sterlingrose Snyder provided a spark off the bench for the Lady Wildcats, scoring a layup in transition off her own steal.

In the final few minutes of the third quarter, Calvary Lutheran went on an 8-0 run. Maddy Sprengel scored half the Lions' points during the run; she was the team's scoring leader for the game with 19 points.

"Of course, we're gonna have to work on that late-game situation to kind of let them let them hang around again, late," Craighead said. "But early in the year, it's hard to simulate that in practice when you only have eight players."

The Lions outplayed New Bloomfield in the final eight minutes, edging the Lady Wildcats 13-10. It wasn't enough for a victory, but the performance showed the Calvary Lutheran team didn't give up.

The Lions' Cadence Keeney played an immense role in the fourth quarter, scoring five points on a layup and 3-pointer.

Meanwhile, Ashlyn Peters led New Bloomfield with five points in the final quarter, including three on a 3-pointer; she also notched a rebound. Peters was second on the team in points and 3-pointers in Tuesday's game, scoring 18 points and three 3-pointers.

"She had some big shots, and again she's capable of it," Craighead said. "We've got about six girls that can knock down some shots.

"Brinley-- who hurt her shoulder, she can too -- and I thought she hit some in that first half. That first quarter, she hits some shots. So you know, it helps when you can make 3s."

It was a big 3-point shooting day for New Bloomfield's entire team. The Lady Wildcats notched 11 3-pointers -- with four players chipping into that total -- while the Lions drained just two 3-pointers.

New Bloomfield will hope to keep it up when it begins play in the Tipton Tournament next week. The Lady Wildcats (1-1) will play their first game of the tournament against California (2-0) at 8:30 p.m. Monday in Tipton.

"It's gonna be very tough," Craighead said. "There's some really good teams, and Tipton's really good. We play California first game; they're loaded. Eldon, we play them our second game. They're very good, and they're a lot bigger than us. So we're gonna have our work cut out for us next week."