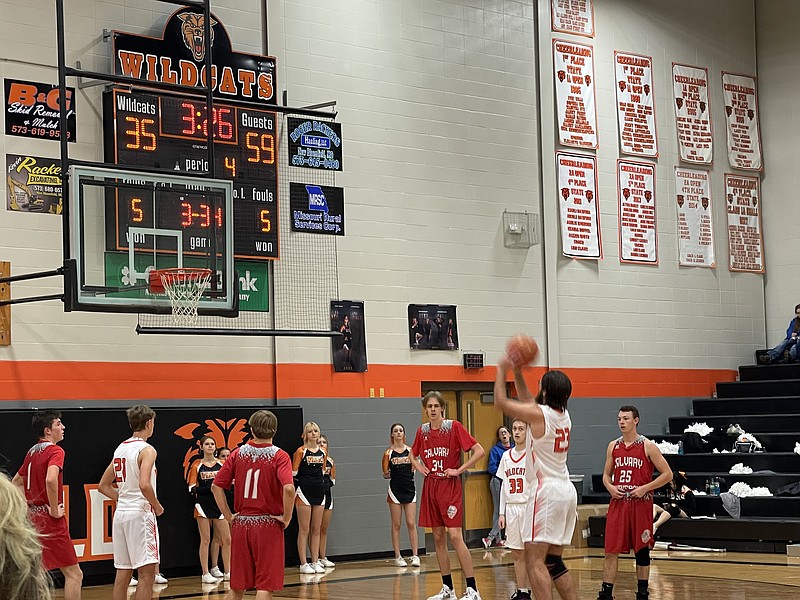 After New Bloomfield boys basketball allowed its opponents to score 91 and 92 points in its first two games, the Wildcats held Calvary Lutheran to 59 in their 59-43 loss to the Lions Tuesday night in New Bloomfield.

Jacob Fuhriman and Benjamin Speaks led New Bloomfield's team and made most of the team's key plays.

After getting into foul trouble and picking up an injury in the Wildcats' loss to Fatima Monday, Fuhriman recorded a team-high 14 points and eight rebounds while also getting a steal. Fuhriman opened a scoring surge for the Wildcats to start the second half and worked relentlessly to take the ball away from his opponent; there was one Calvary Lutheran possession where Fuhriman collected two offensive rebounds.

In the first quarter -- when the Wildcats struggled most -- Speaks and Fuhriman scored seven of New Bloomfield's 10 points. Speaks drained the Wildcats' first 3 of the night while Speaks scored twice on layups.

On the defensive end, it was a struggle for New Bloomfield in the first quarter, as the Lions scored 26 points -- the most for either team in any quarter. Calvary Lutheran went on a 6-0 run in the middle of the first and another 6-0 run to end the quarter.

During those runs, the Lions' Kwesi Hall provided most of the offense, scoring six points. Jesse Jorgenson chipped in four points and landed a buzzer-beater between half-court and the three-point line to end the quarter.

"We allowed so many dribble drives that allowed our defense to be vulnerable," New Bloomfield coach Zach Buscher said. "To kick-outs. to finishes, to everything like that. So when we couldn't stop somebody from getting out, staying out of the lane, it really hurt us, and they finished; it just kind of snowballed that first quarter. ...We were down 16 after the first quarter and lost by 17. ...The first quarter was the game changer essentially."

Most of the points came from free throws during the quarter, as the Wildcats made two field goals while the Lions made three.

"Once we settled down settled in there, we started to look a little better," Buscher said. "Shots weren't falling, you know a couple more shots fall-- a couple more layups, couple more free throws -- we can climb back into that one. It just didn't happen; wasn't in the cards tonight."

The shots started falling for New Bloomfield after halftime.

To start the second half, the Wildcats went on a 7-0 run, which began with a Fuhriman 3-pointer from the top of the arc. Nathan Fuhriman and JT Powell scored two points each to round out the run.

New Bloomfield could not maintain the strong start to the half, as Calvary Lutheran scored eight points unanswered toward the end of the third quarter. Kyle Hagemeyer scored six of the Lions' points during the run, all of which were field goals.

"We talked about it coming out at half," Buscher said. "We needed to put a run together, get it going as quick as we could -- clawback into it. I thought we did well, and then a couple of defensive lapses let them get right back. They build their lead right back up. And it didn't feel like we can catch back up after that."

They may have been down by 16 in the final eight minutes, but the Wildcats still tried their best to come back. New Bloomfield outscored Calvary Lutheran 12-9.

"And I appreciate the guys never quit," Buscher said. "I mean, those first two games of the year, we had some lapses where he didn't play hard. I didn't feel like there was those tonight. I feel like they played all four quarters pretty hard. No matter if we were down 20 Or what. So I really appreciate them playing that hard at the end."

In Tuesday's game, New Bloomfield scored its most points and allowed its least all season. However, the defensive record was more impressive, as the Wildcats scored 39 in one of their games, which was around where they were versus Calvery Lutheran.

"Well, one the young guys are learning; we're figuring it out on the fly," Buscher said. "I'm throwing it on the fire here. It's just what they're gonna have to do every night. They're gonna have to learn something new every night and apply it. The two teams we played (before Tuesday) Harrisburg and Fatima. I mean, they're on another level, and they're the best programs in Mid-Missouri. Calvary is not on that level. They're still good offensively. You gotta guard them, but I thought we did a pretty good job."

New Bloomfield will need to play defensively as it did in the last three quarters when the Wildcats begin to play in Tipton Tournament, starting next week. No. 8 seed New Bloomfield (0-3, 0-1 Show-Me Conference) will play No. 1 seed Versailles (1-0) in its first game at 4 p.m. Monday in Tipton. After that game, the Wildcats will either play No. 4 Eldon or No. 5 California Tuesday in the semifinal of the championship or consolation bracket.

"I know we've been in the tournament for a long time," Buscher said. "This year, they amped it up a little bit a lot. A lot of really high-level teams. We'll go looking to just compete, compete our butts off as long as we can."