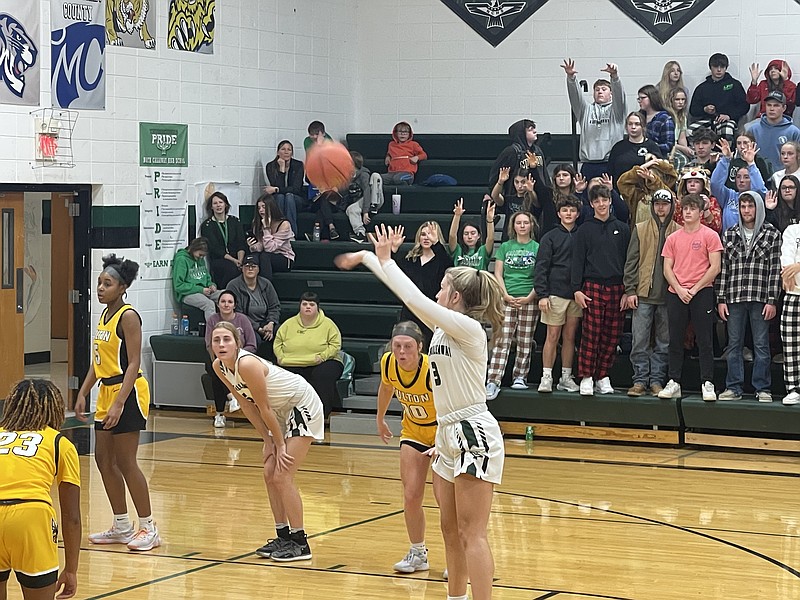 From the vocalness of each team's coach to technical fouls to rowdy student sections to the close contest on the court, it may be hard to believe that North Callaway girls basketball and Fulton faced each other for the first time in over 10 years.

In the long-awaited meeting, the host Ladybirds prevailed 43-37 against the Hornets Monday night in Kingdom City.

Both teams defended well and, most importantly, prevented their opponent from getting in the lane.

Since that was the case, it was down to which team made more of their shots and free throws. That team, as the score shows, was North Callaway.

"It won the game for us," North Callaway coach Tim Turlington said. "That's how crucial that was. The difference is we had several different girls step up and make free throws all night long; wasn't just one girl or two girls. I think we had six or seven, maybe eight knock down free throws at some point during the game (seven North Callaway players made free throws). And that was critical. I mean, we needed every single one of those buckets."

Heading into the fourth quarter, it was a tie game with the score at 32-32.

During that quarter, the Ladybirds made their free throws, going 9-of-16 from the charity stripe in the final eight minutes.

Ladybirds point guard Riley Blevins stood out amongst the team in the deciding minutes. Blevins went 4-for-6 from the line, scored six points and collected three rebounds in the fourth quarter.

Not only did Blevins have an outstanding performance in the final quarter, but she did overall. The junior scored a team-high 14 points and was getting rebounds and steals throughout the game.

"She's such a hard worker," Turlington said. "Good player shoots it well. Wants to do good, wants to be good, and she works at it. I mean, she gets us in and out of whatever we're running. Good teammate works hard, gets the other girls involved. She does what a point guard should do. She's good. If you're a decent player, you average four to six points a game; she'll get you eight, like that, on and on and on. Really pleased with her effort, especially first night out."

"It's like the yin, yang; two sides of the coin (with the Hedgpath twins)," Wilbers said. "One's a great offensive player; the other one's a great defender. Sam does a phenomenal job of sacrificing her body and taking charges for us. She's got an official school record of five (3-pointers) in a game, and we're looking for more situations like that this year. I'm constantly coming to her, 'Hey, two has got a fourth foul, three's got a fourth foul. Go take more charge, get them out of the game so we can take that possession and make somebody else do something for them.' So both of them are stepping into bigger roles this year as juniors and for us to be the type of team that we want to be."

Samantha notched two steals, while Jayna stole the ball once and scored a bucket in transition.

Meanwhile, Henderson -- who finished with a game-high 18 points -- scored eight of Fulton's 14 first-half points and drained two 3-pointers; her second three made it a three-point game with North Callaway up 13-10.

During the Hornets' next offensive possession, Alex Trowbridge made it 13-12 after scoring a mid-range jumper.

The Ladybirds extended their lead before halftime, with a few layups and a Natalie Shyrock 3-pointer from the top of the arc. After two quarters, the score was North Callaway 21-14 Fulton.

"We went back in the locker room, and we talked about our game keys," Fulton coach Matt Wilbers said. "Our three keys were stay focused on us, and then we had our hashtag for the year is '#checkourDATE.' DATE stands for discipline, attitude, toughness -- mentally and physically -- and our energy. And looking inward, do some self-evaluation.

"We didn't feel like we checked our DATE very well. We weren't being very disciplined. We weren't having the best attitude to take care of each other and focus on what we can do. We were physically tough enough. But we weren't mentally tough enough. And our energy could definitely come up, but it was probably the best of our four things. And lastly, one of the things we've been bad about the last few years and I think it leads to bad teams. Bad teams complain about things they can't control -- officiating, opponents doing this, coaches doing this wrong or whatever. And those were three keys."

The Hornets came out of halftime lively, outscoring the Ladybirds 18-11 in the third quarter. During the third, Henderson registered seven points, and Jayna four; three of Jayna's points came on a 3-pointer.

"We did a much better job in the second half -- third quarter especially -- of stop complaining, take the hand you're dealt and go play with what you got," Wilbers said.

There were also a couple of other Hornets stepping up in the third. Grace Ousley went 2-for-2 on free throws, and Jazlynn Varrdemann landed a close-ranged jumper with just a second or two left in the quarter.

Fulton was unable to keep up its solid play in the fourth. The Hornets held North Callaway to 11 points for the second straight quarter, but they were only able to score five -- which was their lowest in any quarter.

North Callaway may be happier with the result, though it was an exciting night of basketball for both squads and their fans. Each coach relished the opportunity to play a fellow Callaway County school.

"We haven't had a lot of wins last few years," Wilbers said. "But we thought that (North Callaway) would be a game that would especially early in the year to give us chance to figure a few things out and see what we can be moving forward. So definitely happy to add this game to our schedule and looking forward to playing them again in the future and find ways to continue to improve."

Before Monday, the last time North Callaway and Fulton met was at the Southern Boone Tournament on Feb. 3, 2012. In that game, the Hornets beat the Ladybirds 67-53 in Ashland.

According to Turlington, if it weren't for some last-minute schedule changes, there would've been a longer wait.

"How this really came about is their coach contacted me," Turlington said. "And we had just happened to have somebody drop us. Our first game, Calvary Lutheran, dropped us -- that we usually play on this day -- and they dropped us in like September. So we've been looking for a game, and here's Fulton('s coach); he calls me or emails me. And so we started emailing back dates and things like that. And I said, this is the date I would like, and 'Yeah, let's do it.' And so that's how the game came about.

"Other than that, if it wouldn't have been for that, neither one of us would have thought anything about playing each other. But I think it's good. ...We're definitely playing a home and home. And then, hopefully, extend this on into the future because why don't we play? We're just seven miles away, or whatever it is. It's good for both clubs."

North Callaway will be back in action after Thanksgiving when it takes on Centralia at 6 p.m. Tuesday in Centralia.

"Centralia is gonna be a good ballclub," Turlington said. "They always have good athletes. Well-coached. It's going to be -- in the way this team has playing now -- I think that's gonna be a very physical game. ...I think most of our games are going to be physical, I think. And I'm okay with that. That's kind of what we've preached as far as defensively -- be physical on defense. We can always back it off, but I think it's going to be a physical game. Centralia is a tough team. I think they return most of their starters from last year, or at least three of their starters; something like that. ...Good environment. It'd be a good second game for us."

"We're excited for Belle," Wilbers said. "Ready to get back in the gym and play with our home crowd. We had a fun game with them last year. We were missing Jayna and Sam. Only had really two guards in, Kiah Pittman and Kier Henderson. We're gonna play them again tomorrow at our place. We're gonna be more guard-heavy this year than we were last year. If it goes like it did last year, they're gonna press us, and we're gonna have to better handle that press. We'll see you can see how that goes. We definitely want that one."