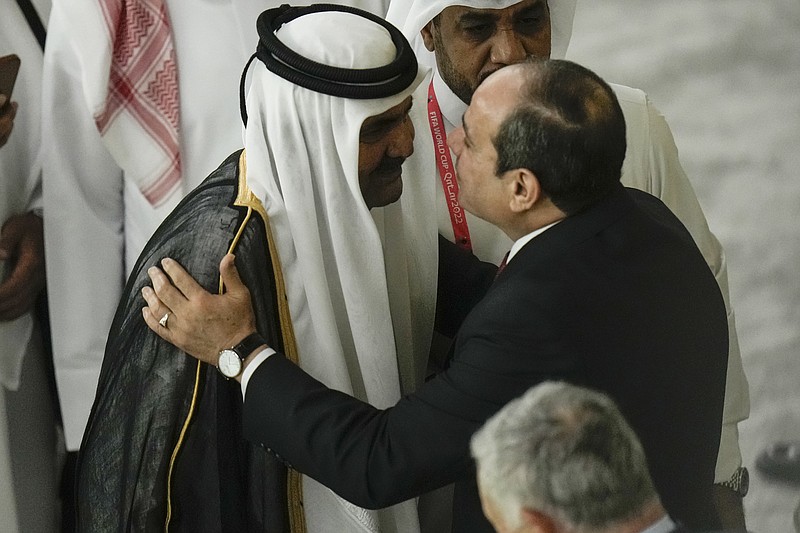 AL KHOR, Qatar (AP) -- Qatar opened the Middle East's first World Cup on Sunday with its ruler sitting next to the leaders of two Arab countries that only a year and a half earlier had been part of a boycott trying to bring the energy-rich nation to its knees.

No leaders of major Western countries were seen at the opening ceremony for the tournament in Qatar, which has faced intense criticism, particularly in Europe, over its treatment of migrant laborers and the LGBTQ community.

But the presence of Saudi Crown Prince Mohammed bin Salman and Egyptian President Abdel Fattah el-Sissi shows how far Qatar has come since the boycott that saw its sole land border and air routes cut off for years as part of a political dispute.

Also on the dais with leaders was Turkish President Recep Tayyip Erdogan, who provided a vital lifeline to Qatar during the crisis.

Dubai's ruler Sheikh Mohammed bin Rashid Al Maktoum and his son attended on behalf of the UAE. Sheikh Mohammed serves as the UAE's vice president and prime minister -- and skyscraper-studded Dubai long has been a focus of Qatari investment.

But missing was the UAE's president, Abu Dhabi ruler Sheikh Mohammed bin Zayed Al Nahyan, and the king of Bahrain. Analysts believe both remain highly skeptical of Qatar and their absence suggests that a full rapprochement across the typically clubby Gulf Arab nations remains far off.

Saudi Prince Mohammed smiled broadly and sat only one seat away from Sheikh Tamim bin Hamad Al Thani, Qatar's ruling emir, at the opening ceremony in Al Khor north of the capital, Doha. Between them was Gianni Infantino, the president of FIFA, the governing body of world soccer.

After an opening ceremony speaking of the inclusivity of Bedouin tradition -- inside a stadium designed to look like a traditional tent -- Sheikh Tamim struck the same note in a short speech.

"How beautiful it is for people to put aside what divides them in order to celebrate their diversity and what brings them together at the same time," he said.

At the height of the Qatar crisis, newspaper columns even suggested digging a trench along the 54-mile border and filling it with nuclear waste. While rhetorical bluster, it showed how deeply the anger ran in the region amid the dispute -- which Kuwait's then-ruler suggested nearly sparked a war.

Its root came from Qatar's stance in supporting the Islamists who rose to power in Egypt and elsewhere following the 2011 Arab Spring. While Qatar viewed their arrival as a sea change in the gerontocracies gripping the Mideast, other Gulf Arab nations saw the protests as a threat to their autocratic and hereditary rule.

Erdogan's own support of the Islamist group Muslim Brotherhood and Egypt's deposed late President Mohammed Morsi had alienated the Gulf Arab nations. El-Sissi, who as a general led the 2013 coup that toppled Morsi, was photographed shaking hands with Erdogan in the sign of a possible thaw between those two nations. Sheikh Tamim could be seen smiling in the background.

Qatar also faced criticism from the West as groups they funded initially in Syria's civil war became extremists. Qatar later would deny that it ever funded Islamic extremists, despite criticism from across the American political spectrum from Hillary Clinton to Donald Trump.

Qatar, like Saudi Arabia, follows an ultraconservative version of Islam known as Wahhabism. Yet the country allows alcohol to be served in hotel bars and at a FIFA Fan Zone in the country. Already, some in the country have criticized what they view as Western cultural extravaganzas of the tournament -- likely leading to the stadium beer ban.

Al-Qaida in the Arabian Peninsula, the Yemen-based arm of the extremist group, issued a communique Saturday criticizing the Qataris for hosting a tournament "bringing immoral people, homosexuals, sowers of corruption and atheism."

"We warn our Muslim brothers from following this event or attending it," the group said, calling on scholars not to support it. However, the al-Qaida arm did not directly threaten the tournament and has been weakened by years of drone strikes from American forces and engulfed by Yemen's ongoing war.

Kuwait's crown prince came, along with the director-general of the World Health Organization and Djibouti's president.

But the biggest applause came for Sheikh Tamim and his father, Sheikh Hamad bin Khalifa Al Thani, who secured the tournament back in 2010.

Meanwhile, Iran sent just its minister of youth and sports -- not its hard-line president -- as the Islamic Republic faces monthslong protests over the death of a 22-year-old woman earlier detained by the country's morality police.

It was unclear at what level Western nations were represented at the ceremony and the opening match between Qatar and Ecuador. On Saturday, Infantino delivered an unusual speech at a news conference where he scolded Europeans for criticizing Qatar's human rights record ahead of the tournament, saying they were in no position to give "moral lectures" given their history. 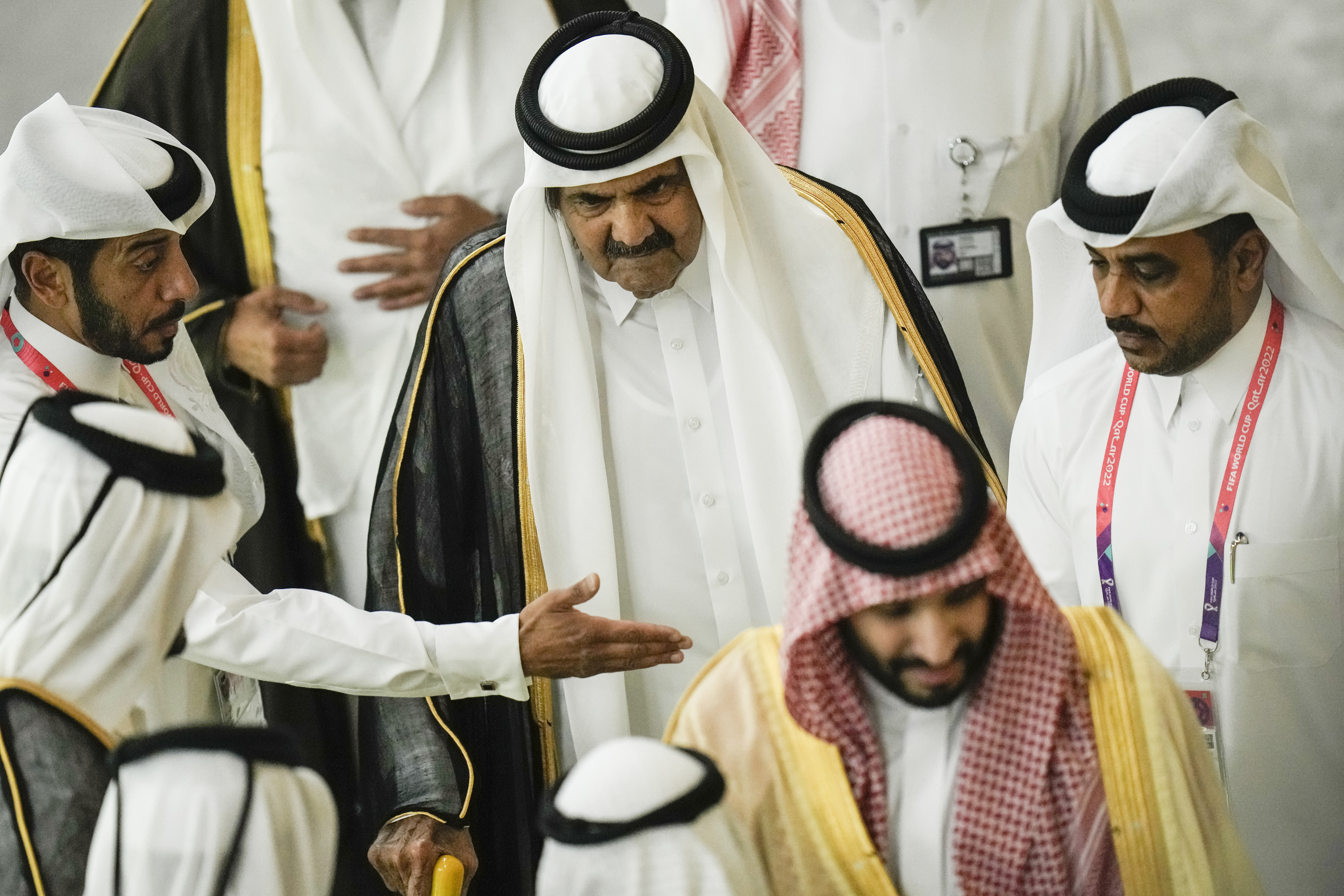 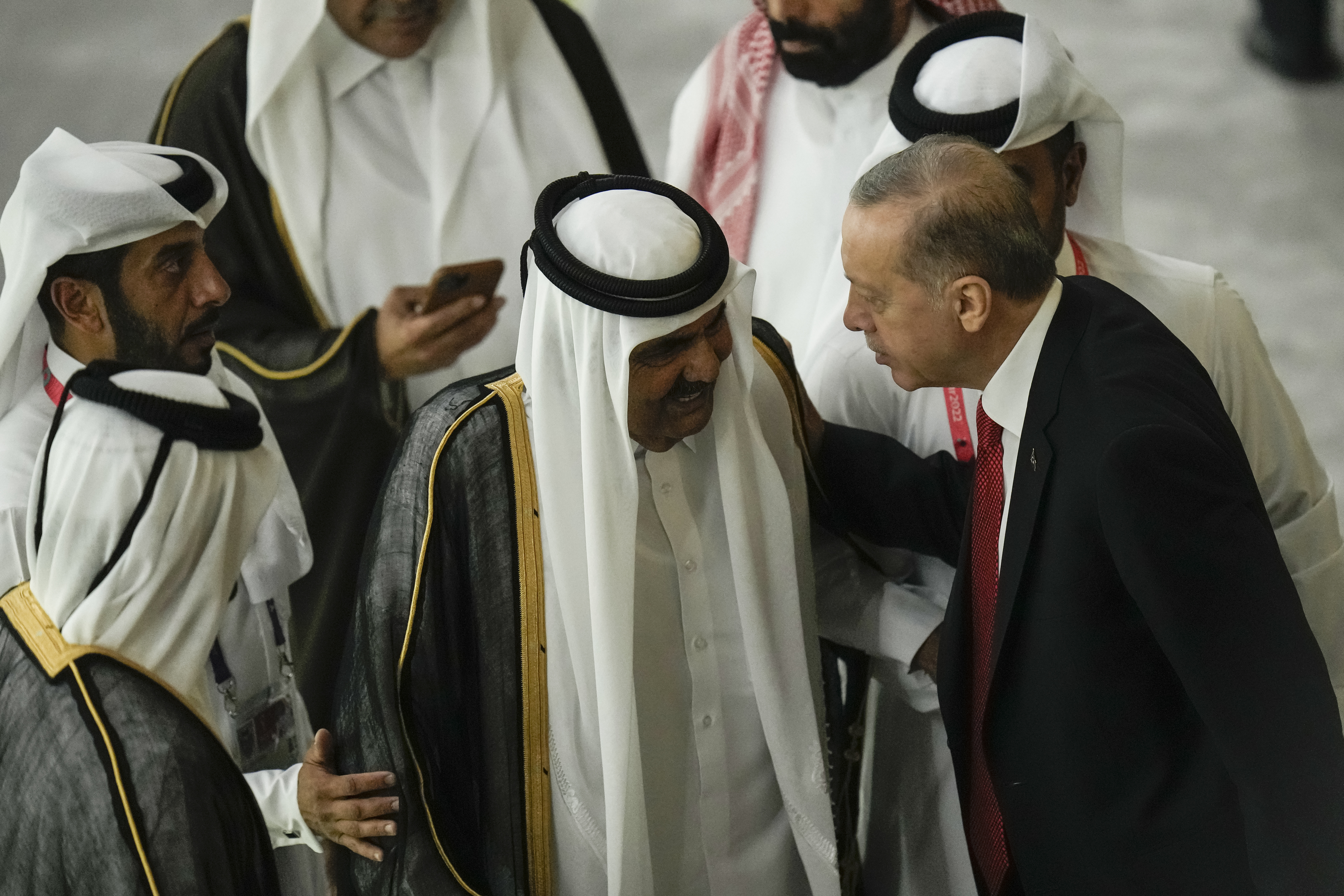 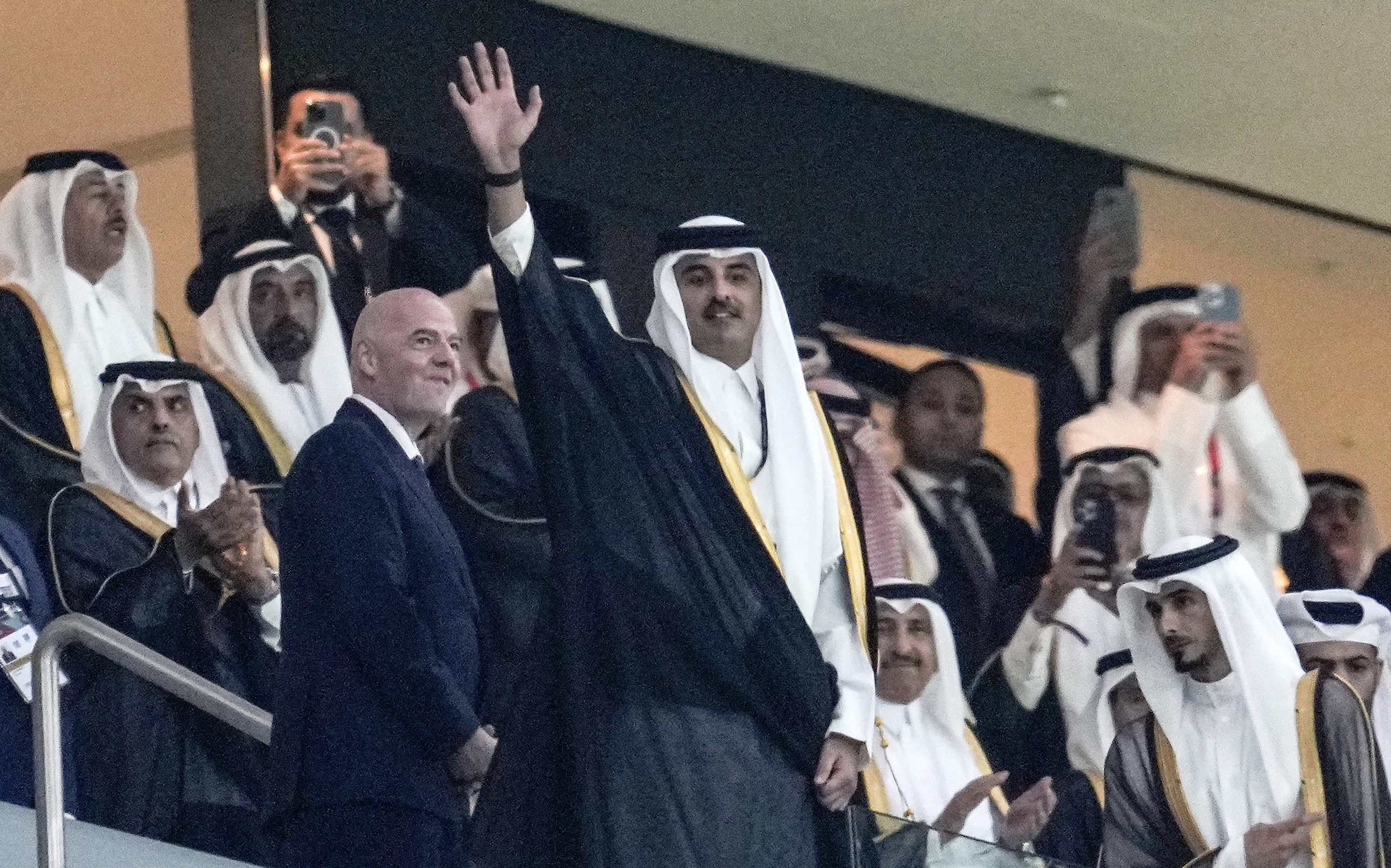 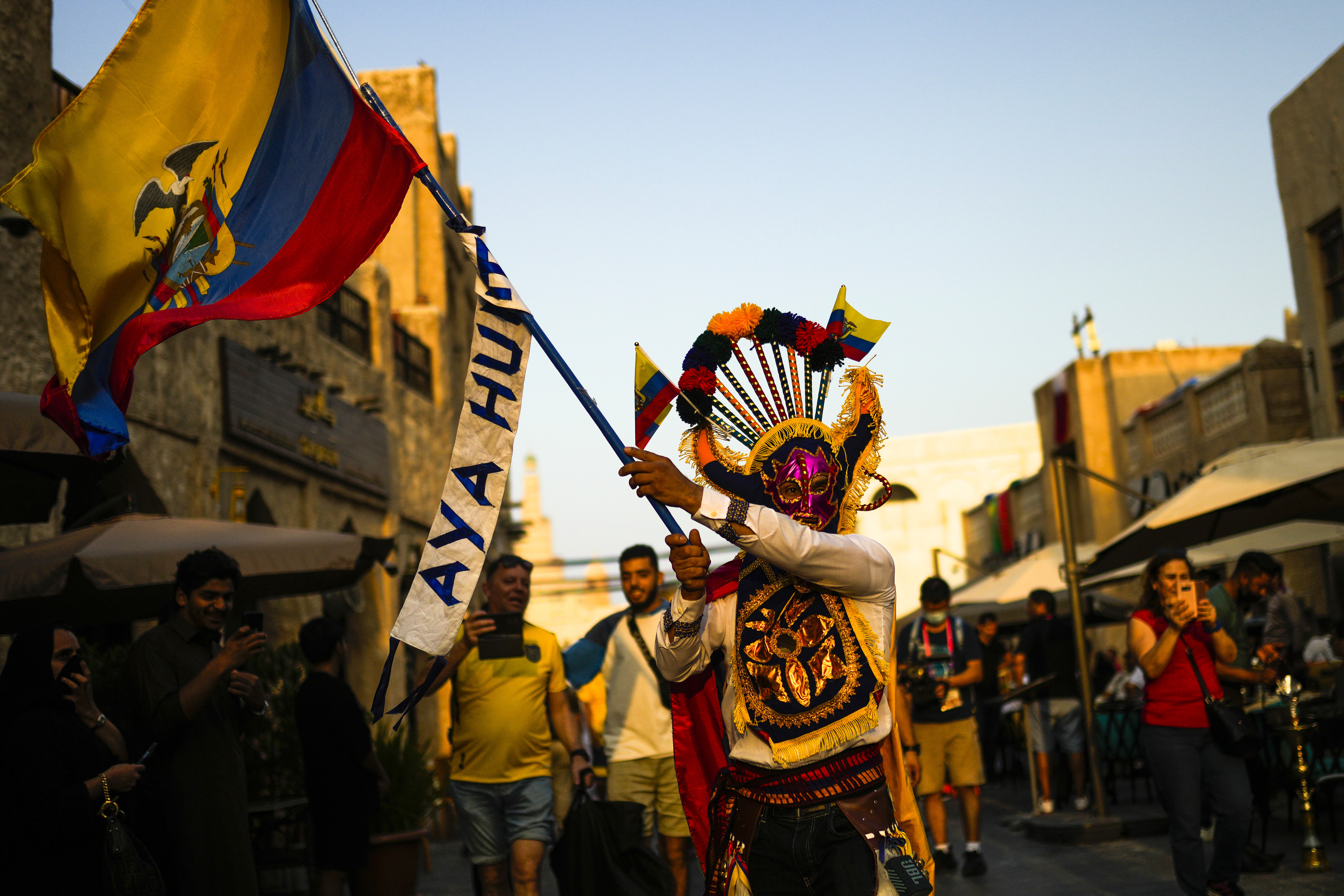 An Ecuador supporter waves an Ecuador flag as he cheers, one day ahead of the World Cup kick off, in downtown Doha, Qatar, Saturday, Nov. 19, 2022. (AP Photo/Francisco Seco) 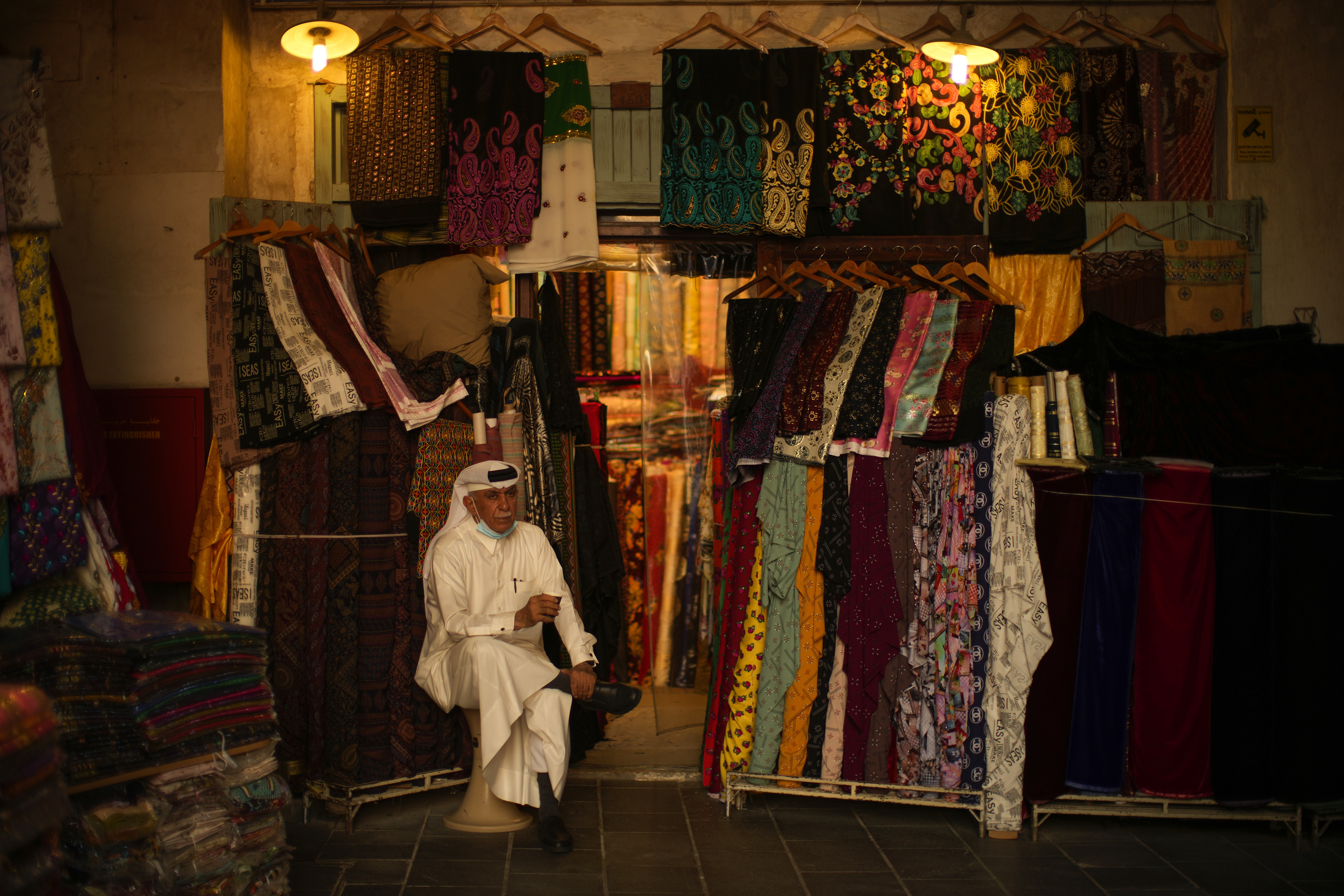 A clothes shop seller drinks tea as he waits for customers in Souq Waqif market, one day ahead of the World Cup kick off, in Doha, Qatar, Saturday, Nov. 19, 2022. (AP Photo/Francisco Seco) 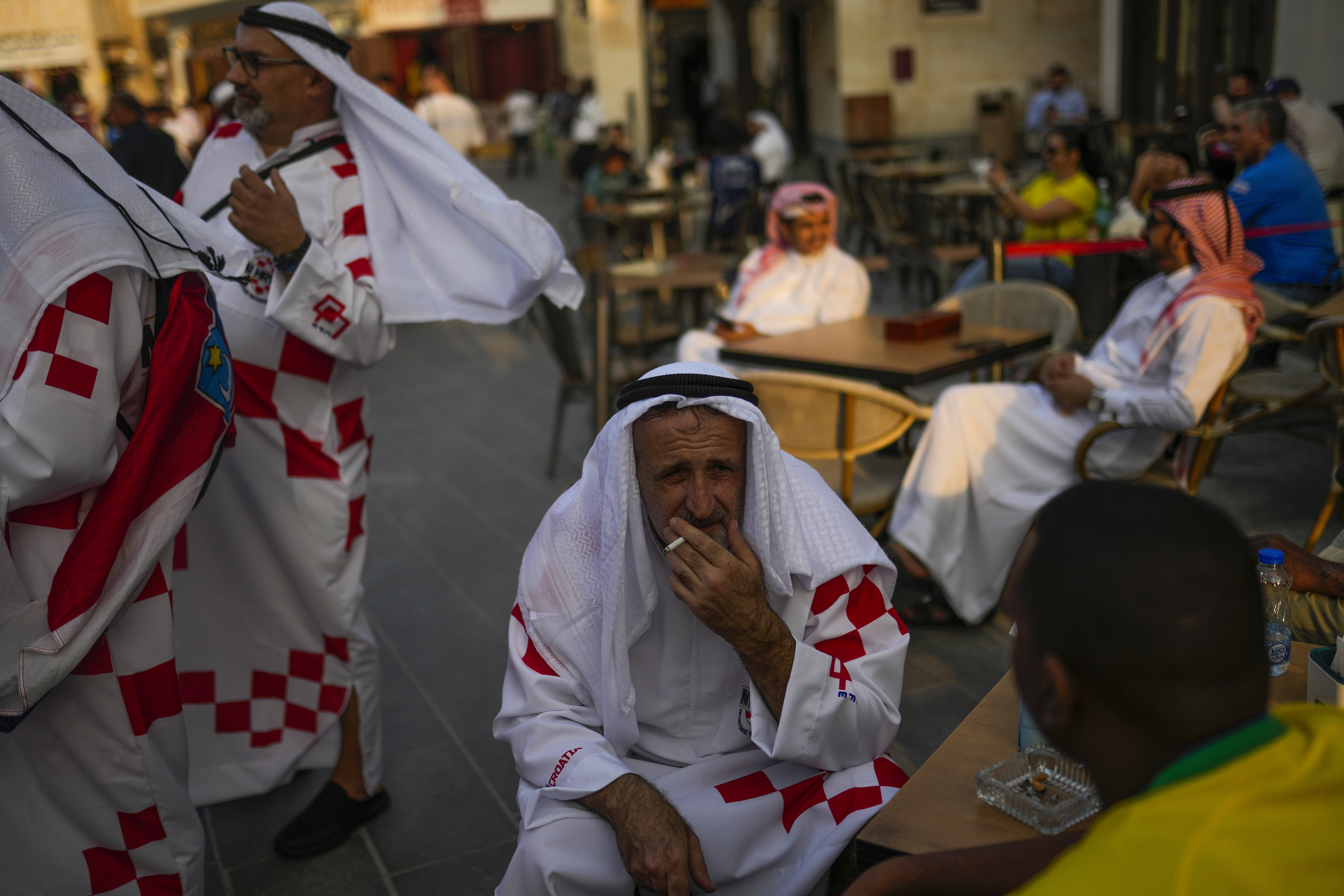 A Croatian supporter smokes as talks with a Brazilian fan, bottom right, one day ahead of the World Cup kick off, in downtown Doha, Qatar, Saturday, Nov. 19, 2022. (AP Photo/Francisco Seco) 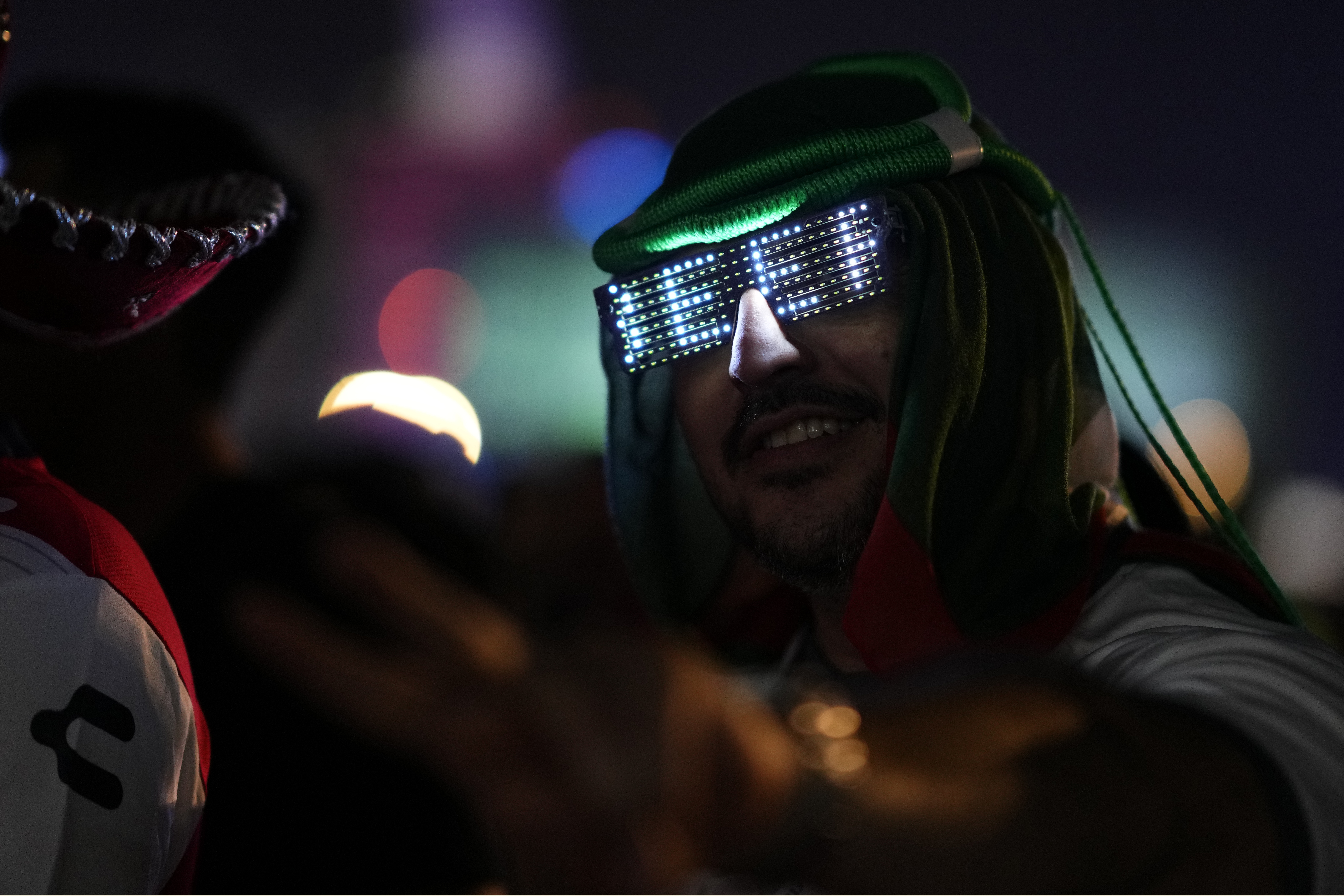 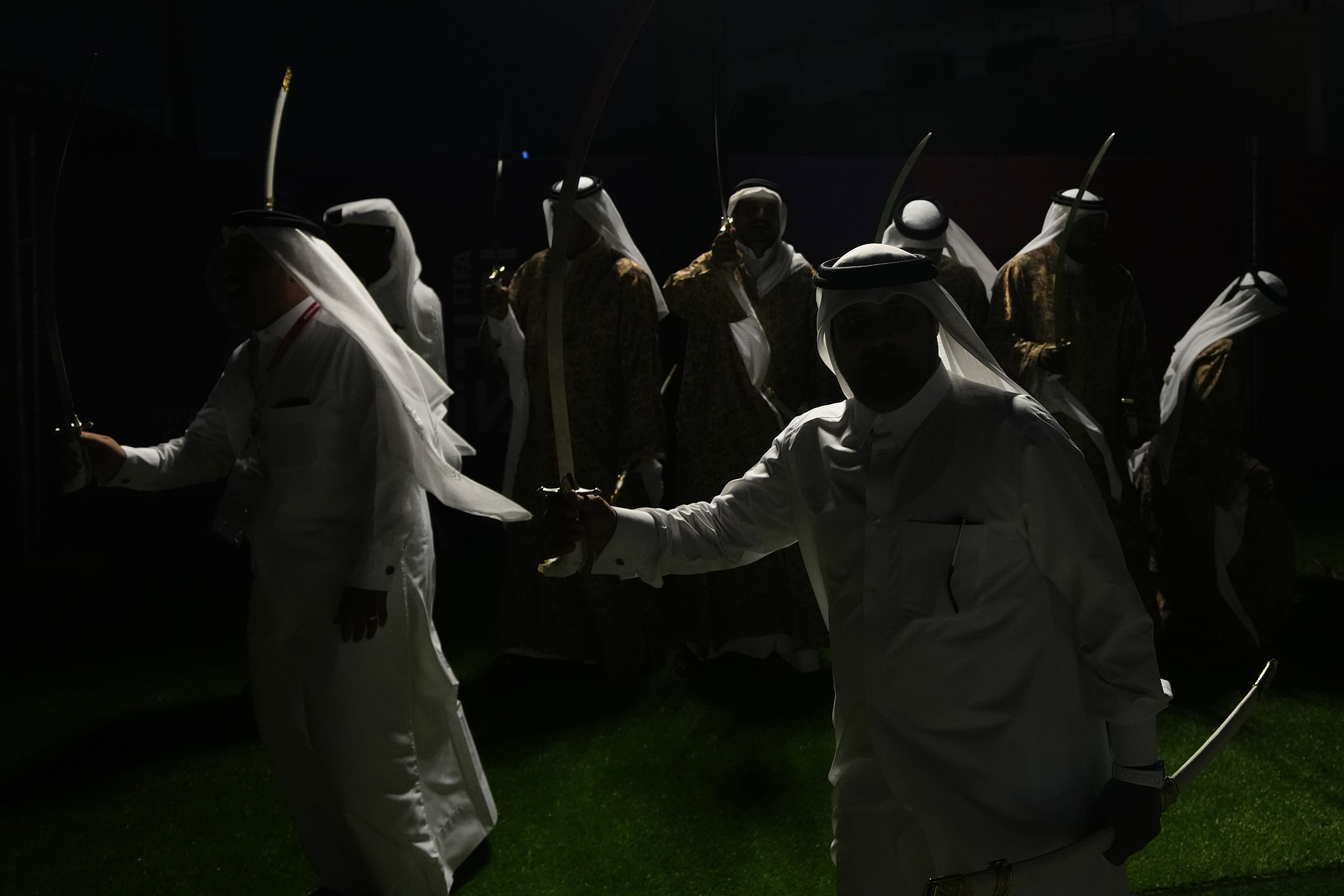 Dancers perform at a fan zone ahead of the FIFA World Cup, in Doha, Qatar Saturday, Nov. 19, 2022. (AP Photo/Petr Josek)