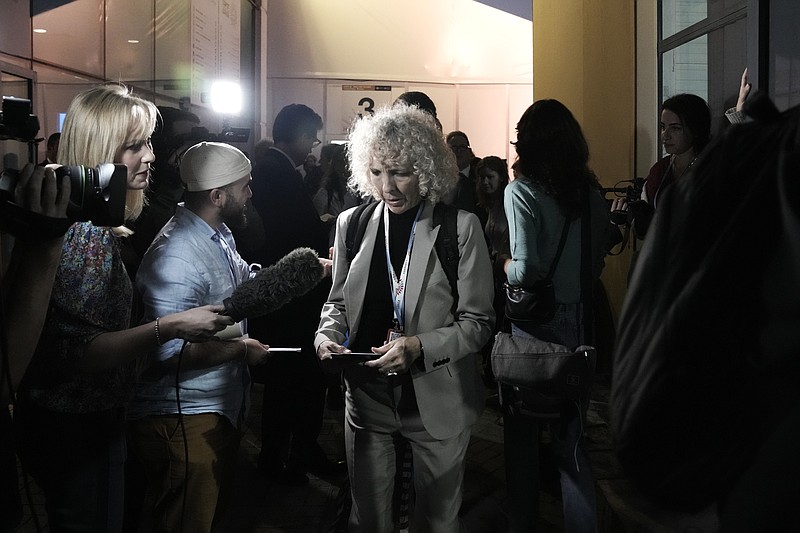 SHARM EL-SHEIKH, Egypt -- For the first time, the nations of the world decided to help pay for the damage an overheating world is inflicting on poor countries, but they finished marathon climate talks on Sunday without further addressing the root cause of those disasters -- the burning of fossil fuels.

The deal, gaveled around dawn in this Egyptian Red Sea resort city, established a fund for what negotiators call loss and damage.

It was a big win for poorer nations which have long called for money -- sometimes viewed as reparations -- because they are often the victims of climate-worsened floods, droughts, heat waves, famines and storms despite having contributed little to the pollution that heats up the globe.

It has also long been called an issue of equity for nations hit by weather extremes and small island states that face an existential threat from rising seas.

"Three long decades and we have finally delivered climate justice," said Seve Paeniu, the finance minister of Tuvalu. "We have finally responded to the call of hundreds of millions of people across the world to help them address loss and damage."

Pakistan's environment minister, Sherry Rehman, said the establishment of the fund "is not about dispensing charity."

"It is clearly a down payment on the longer investment in our joint futures," she said, speaking for a coalition of the world's poorest nations.

Antigua and Barbuda's Molwyn Joseph, who chairs the organization of small island states, described the agreement as a "win for our entire world."

"We have shown those who have felt neglected that we hear you, we see you, and we are giving you the respect and care you deserve," he said.

The deal followed a game of chicken, with nations that supported the fund also signaling they would walk away if there was any backsliding on language on the need to slash greenhouse gas emissions.

Early Sunday morning, delegates approved the compensation fund but had not dealt with the contentious issues of an overall temperature goal, emissions cutting and the desire to target all fossil fuels for phase down. Through the wee hours of the night, the European Union and other nations fought back what they considered backsliding in the Egyptian presidency's overarching cover agreement and threatened to scuttle the rest of the process.

The package was revised again, removing most of the elements Europeans had objected to but adding none of the heightened ambition they were hoping for.

"What we have in front of us is not enough of a step forward for people and planet," a disappointed Frans Timmermans, executive vice president of the European Union, told his fellow negotiators. "It does not bring enough added efforts from major emitters to increase and accelerate their emissions cuts.

"We have all fallen short in actions to avoid and minimize loss and damage," Timmermans said. "We should have done much more."

"It is more than frustrating to see overdue steps on mitigation and the phase-out of fossil energies being stonewalled by a number of large emitters and oil producers," she said.

The agreement includes a veiled reference to the benefits of natural gas as low emission energy, despite many nations calling for a phase down of natural gas, which does contribute to climate change.

While the new agreement doesn't ratchet up calls for reducing emissions, it does retain language to keep alive the global goal of limiting warming to 1.5 degrees Celsius (2.7 degrees Fahrenheit). The Egyptian presidency kept offering proposals that harkened back to 2015 Paris language which also mentioned a looser goal of 2 degrees. The world has already warmed 1.1 degrees (2 degrees Fahrenheit) since pre-industrial times.

Nor did the final deal expand on last year's call to phase down global use of "unabated coal" even though India and other countries pushed to include oil and natural gas in language from Glasgow. That too was the subject of last minute debate, especially upsetting Europeans.

Last year's climate talks president chided the summit leadership for knocking down his efforts to do more to cut emissions with a forceful listing of what was not done.

"We joined with many parties to propose a number of measures that would have contributed to this emissions peaking before 2025, as the science tells us is necessary. Not in this text," the United Kingdom's Alok Sharma said emphasizing the last part. "Clear follow through on the phase down of coal. Not in this text. A clear commitment to phase out all fossil fuels. Not in this text. And the energy text weakened in the final minutes."

And in his remarks to negotiators, U.N. climate chief Simon Stiell, who hails from Grenada, called on the world "to move away from fossil fuels, including coal oil and gas."

However, that fight was overshadowed by the historic compensation fund.

"Quite a few positives to celebrate amidst the gloom and doom" of not cutting emissions fast enough to limit warming to 1.5 degrees, said climate scientist Maarten van Aalst of the Red Cross Red Crescent Climate Center, which responds to climate disasters.

It's a reflection of what can be done when the poorest nations remain unified, said Alex Scott, a climate diplomacy expert at the think tank E3G.

"I think this is huge to have governments coming together to actually work out at least the first step of ... how to deal with the issue of loss and damage," Scott said. But like all climate financials, it is one thing to create a fund, it's another to get money flowing in and out, she said. The developed world still has not kept its 2009 pledge to spend $100 billion a year in other climate aid -- designed to help poor nations develop green energy and adapt to future warming.

Next year's talks will also see further negotiations to work out details of the new loss and damage fund, as well as review the world's efforts to meet the goals of the Paris accord, which scientists say are slipping out of reach.

According to the agreement, the fund would initially draw on contributions from developed countries and other private and public sources such as international financial institutions. While major emerging economies such as China wouldn't automatically have to contribute, that option remains on the table. This is a key demand by the European Union and the United States, who argue that China and other large polluters currently classified as developing countries have the financial clout and responsibility to pay their way.

The fund would be largely aimed at the most vulnerable nations, though there would be room for middle-income countries that are severely battered by climate disasters to get aid.

Martin Kaiser, the head of Greenpeace Germany, described the agreement on a loss and damage as a "small plaster on a huge, gaping wound."

"It's a scandal that the Egyptian COP presidency gave petrostates such as Saudi Arabia space to torpedo effective climate protection," he said.

Many climate campaigners are concerned that pushing for strong action to end fossil fuel use will be even harder at next year's meeting, which will be hosted in Dubai, located in the oil-rich United Arab Emirates. 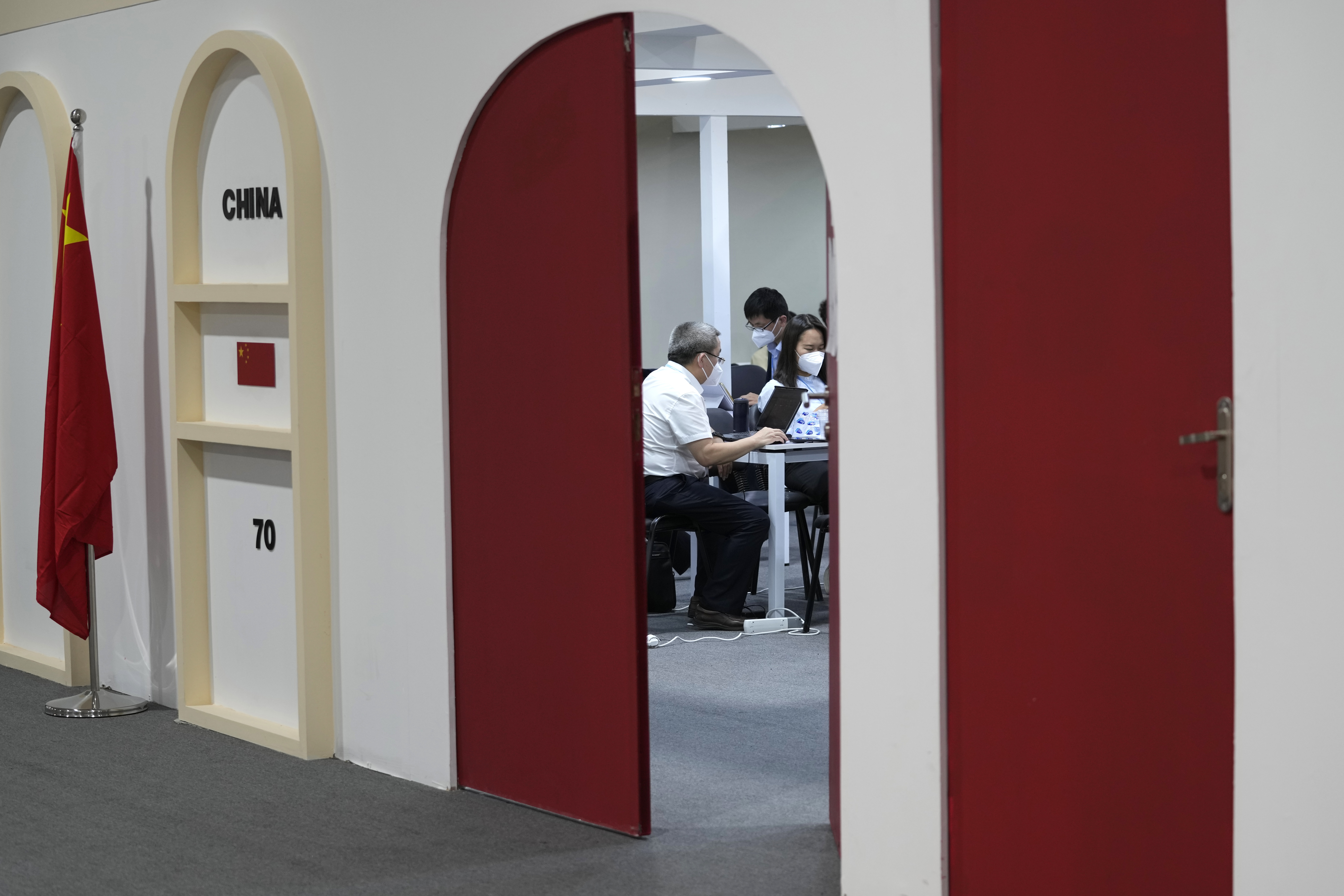 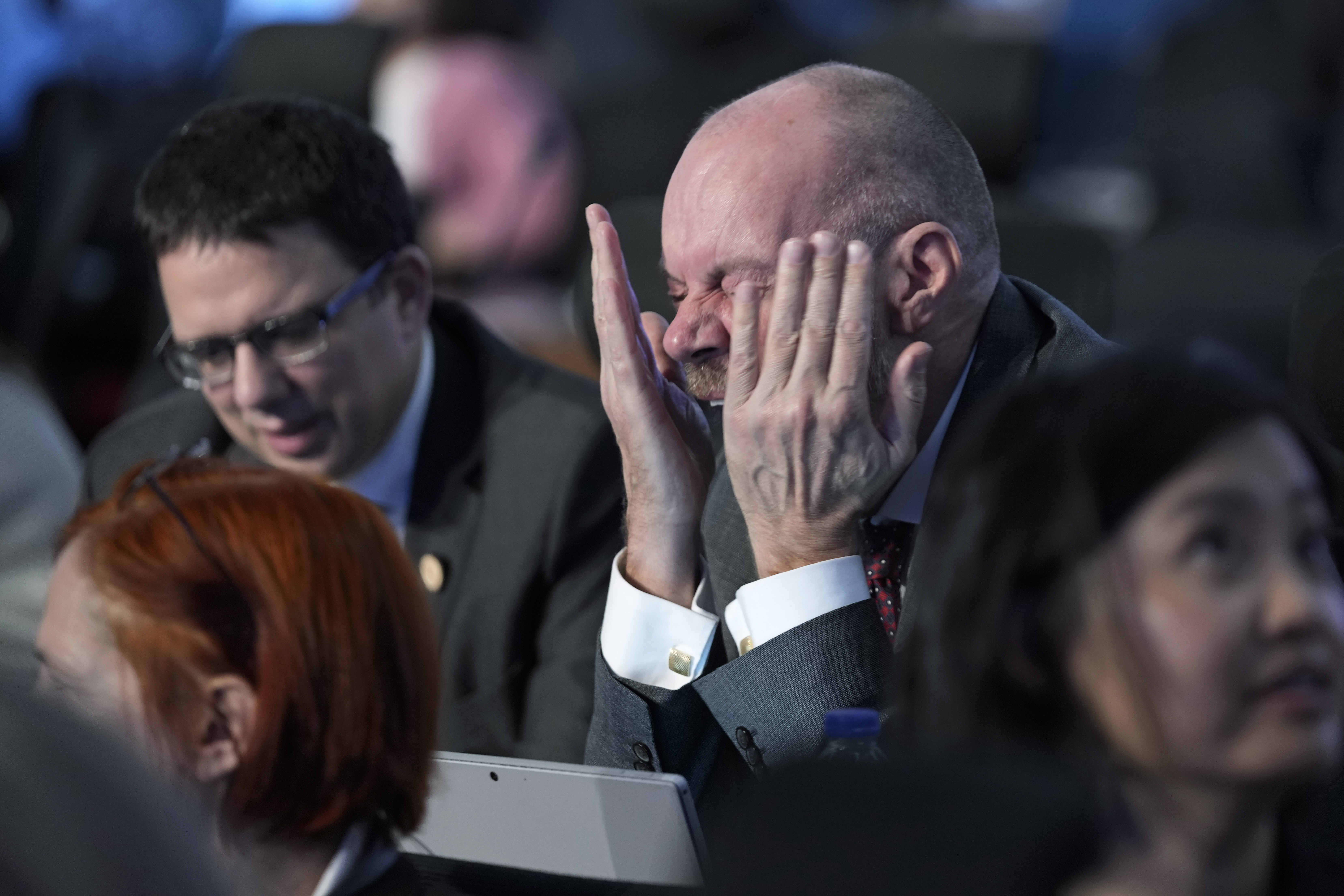 A delegate yawns during a break in a closing plenary session at the COP27 U.N. Climate Summit, Sunday, Nov. 20, 2022, in Sharm el-Sheikh, Egypt. (AP Photo/Peter Dejong) 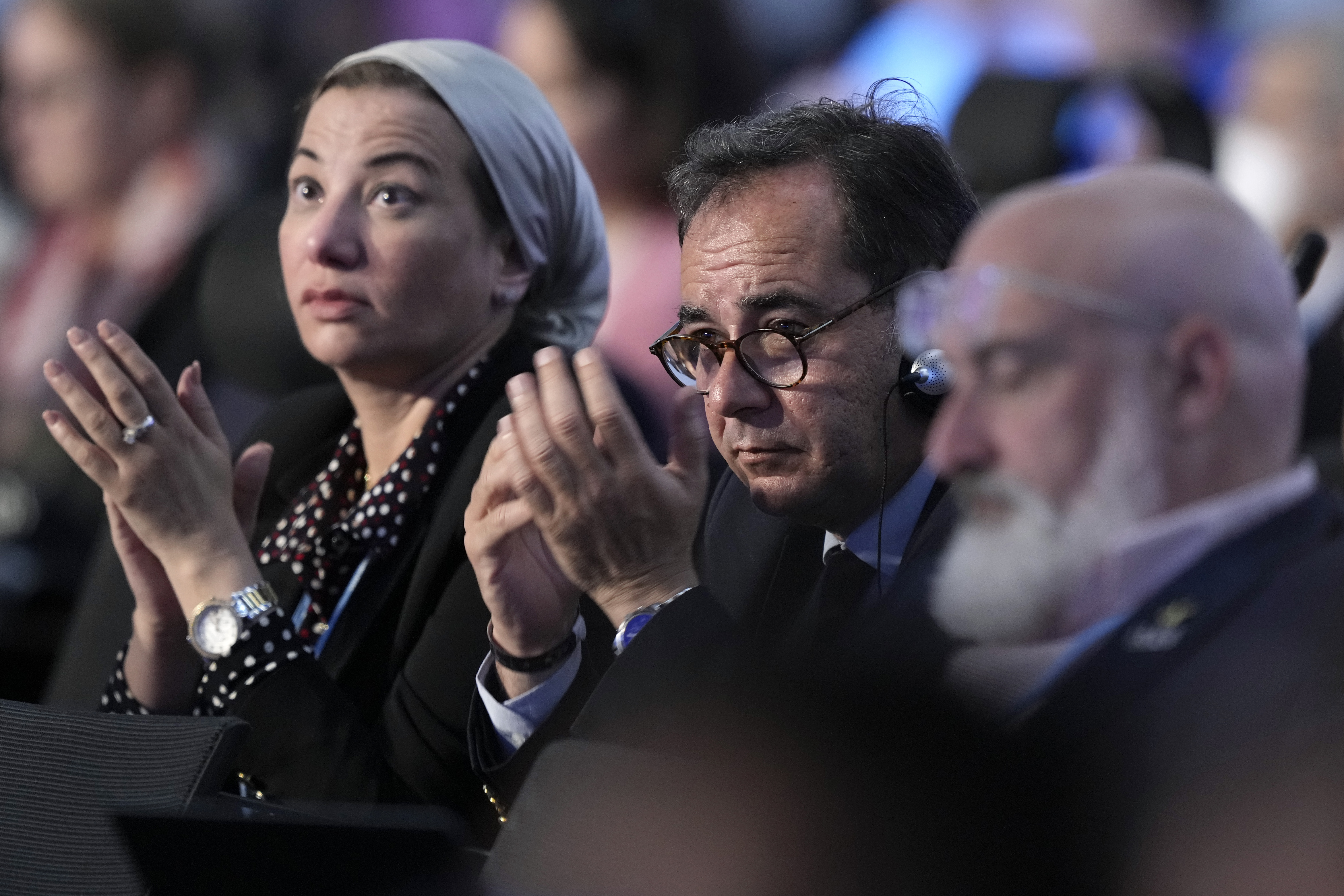 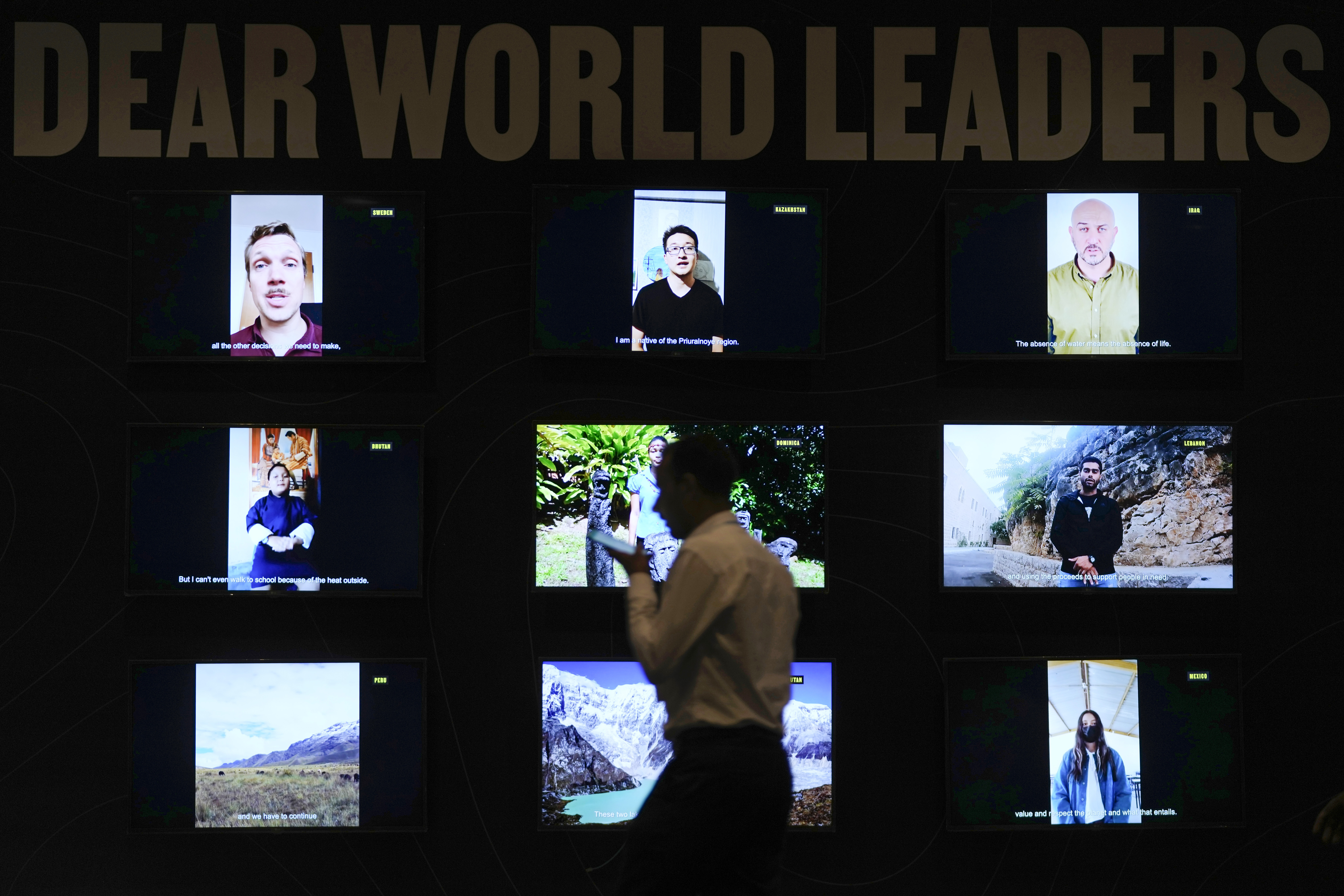