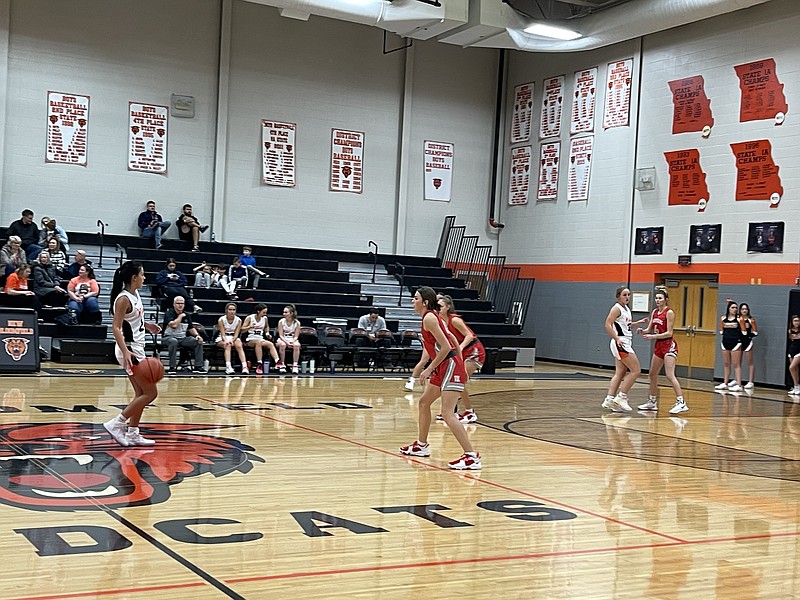 New Bloomfield girls basketball hosted Harrisburg for its first game of the season, and the Lady Wildcats fell 59-19 to the Bulldogs Saturday afternoon in New Bloomfield.

Three of New Bloomfield's starting five -- all of which played on the school's softball team in the fall -- were bright spots in a tough matchup. Those three Lady Wildcats were Brooklyn Smith, Avery Nichols and Macie Abbott.

Smith shined most in the first half. The senior scored six of the team's 11 points, drained New Bloomfield's only 3-pointer and steal of the half and collected four rebounds.

When it was still anyone's game, Smith scored the Lady Wildcats' first point of the season and the contest on a free-throw attempt. She also put New Bloomfield on top for the second and final time, hitting a 3-pointer that made it 4-2 Lady Wildcats.

"I thought she did a real good job," New Bloomfield coach Brett Craighead said. "She played hard. And that's what I told those girls. I mean, first game, we didn't quit. We got down; we didn't quit, and I was pleased with their effort the whole game. Eight players, we don't have a whole lot of depth. And it's hard to practice with eight, so we're a little bit behind, but I thought they played hard. And that's all I can ask."

In the second half, Nichols led New Bloomfield's offense, scoring six points. Nichols scored her first points of the season, when she pulled up for an easy 3-point shot from the top of the arc in the middle of the third quarter; her shot lowered New Bloomfield's deficit to 24, which was the smallest margin after halftime.

While she may have scored all her points in the second half, Nichols was one of the Lady Wildcats' defensive leaders all game. The senior collected a team-high eight boards against a physical Harrisburg team.

"She's one of the leaders of the team," Craighead said. "And we got four seniors, and I think they provide pretty good leadership for our team. They work hard; they play hard. ...She's gonna have to have nights good nights every night for us to be successful. I was pleased with the way she played. Of course, we made some mistakes. But first game and practicing with eight girls, it's kind of hard to get a good gauge until you get some games in."

Abbott was the best player for New Bloomfield Saturday, who wasn't a senior. The sophomore played a crucial role in the Lady Wildcats' defense, registering four rebounds.

And while it may not show up on the stat sheet, Abbott matched the Bulldogs' physicality. She ran out of bounds and into the bench several times, trying to keep the ball in play.

"Our size compared to their size, there's really no comparison," Craighead said. "But Macie, she's going to have to play that role for us, as that stopper; and get some rebounds and play strong and stay out of foul trouble. Because we're going to need her and pretty much our

The tallest player on Harrisburg's team, Carli Ellis, who is 5'11, happened to provide most of the Bulldogs' offense and had a great game defensively. Ellis registered 18 points, six rebounds and three steals.

"She's very good," Craighead said. "I think she's possibly been a starter since she was a freshman. I remember her as a freshman. She's athletic, she's good. And I knew that was going to be one of our issues is how we're going to guard people inside. So I mean, we're gonna have to make some adjustments, but she's a good player."

The entire Harrisburg team posed a challenge for New Bloomfield, whether it was Ellis or someone else.

It may not have been what the Lady Wildcats wanted, but they have an excellent chance to turn things around when they play Calvary Lutheran at 6:15 p.m. Tuesday in New Bloomfield. According to MSHSAA, the Lady Wildcats beat the Lions 54-20 last season and are 10-1 all-time versus them.

"We're just gonna go out and try to improve on what we do and make adjustments as the game goes on and see where we're at," Craighead said.