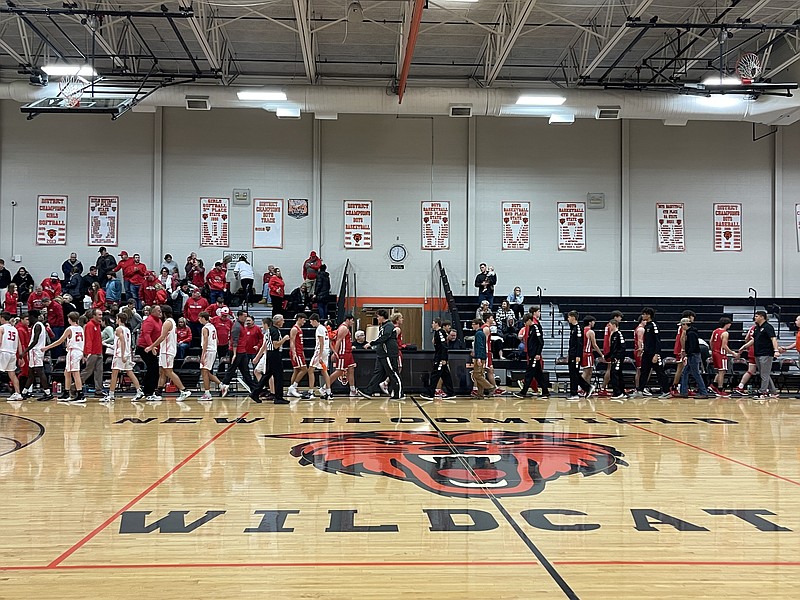 New Bloomfield boys basketball played Harrisburg in the season opener for the fourth straight season, and the Wildcats lost to the Bulldogs for the fourth consecutive time.

The lone performance for the Wildcats that stood out in an otherwise challenging contest was guard Jacob Fuhriman. New Bloomfield's starting point guard finished the game with 15 points, four rebounds, two steals and a block.

Jacob scored the Wildcats' first three points of the season on a contested 3-point shot from the top right of the arc. And at the end of the second half, he landed a buzzer-beater from nearly half-court.

"Jake Fuhriman really played really well," New Bloomfield coach Zach Buscher said. "Coming into this year, we knew that there was going to be him and Nate (Nathan Fuhriman) -- his brother. It was going to be a one-two punch there. Jake really showed his stuff today -- what he can do -- get into the rim, handle on the ball for us, being a leader. It's what we need from him. I expect a couple of others to step up still, but Jake really showed well today."

As a team, the Wildcats' offense had plenty of scoring chances from the free-throw line, as Harrisburg committed 23 personal fouls. However, new Bloomfield went 7-for-16 from the charity stripe, which made it a challenge for the Wildcats to make it a closer score.

"They're definitely physical," Buscher said. "We knew it coming in, though, that they were gonna be physical. We've still got to learn to handle the pressure. Take blows, take things, and we can use them anyway. It's going to be a learning curve this year. We knew that anyway. We're playing six freshmen. There are no seniors on the squad. We're still going to learn, so that's a good start to our season there getting to play a physical team. And one of the most physical teams we'll play right there. So that's what we wanted."

While the Bulldogs defended well, it was a struggle for New Bloomfield. According to Buscher, the Wildcats must keep the opposition out of the lane more than they did against Harrisburg.

"Defensively, there were a couple of flashes," Buscher said. "We still have to get better. I don't know if anyone stood out, but we still need to be a better team defensively. Keeping someone in front of us, being held, talking -- all that comes with being young. We'll figure it out. But right now, it's still a work in progress."

There wasn't just one player on the Bulldogs who were getting a bulk of the team's points; it was Harrisburg's entire squad.

Though, one Bulldog that played well not just offensively but defensively as well was Braden Wyatt. The 6'3 forward notched four points, two rebounds, three blocks and one steal -- assists weren't tracked, though Wyatt was passing the ball around to teammates in scoring positions all day.

Wyatt's most impressive play happened when he scored two points on a dunk early in the first quarter. The highlight reel play left New Bloomfield fans in awe.

"He's special," Buscher said. "He's a freak athlete. We knew it. Not much you can do. Our big guy goes into foul trouble -- the only one probably who could physically match up with him. Not even really match up with him, just contain him. He's a specimen to watch. He's real good. He was one we keyed on. But he got away a couple of times and threw some pretty impressive ones down."

The outcome wasn't what New Bloomfield fans wanted, though it was still an exciting afternoon with the Wildcats' season starting on their home court.

"I'm excited to get going," Buscher said. "It's (my) third year here. So I've got a good squad this year. They're really working. They busted their butt in practice, so it's good to finally get a game, and the crowd was pretty good for a home opener. I want to see it continue and even get better."

For those who missed Saturday's game and even for those who didn't, New Bloomfield's next game is a home encounter versus Show-Me Conference opponent Fatima at 7:30 p.m. Monday.

"Fatima, they're always perennially one of the best teams in the conference, in Mid-Missouri," Buscher said. "Coach (Ryan Robertson) runs a great program over there. They're gonna be athletic; they're gonna get after us. We have to be ready to compete for four quarters."