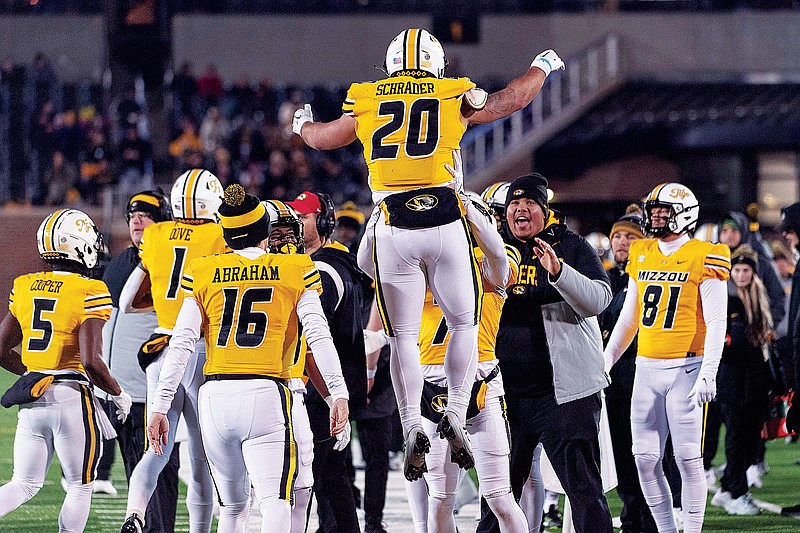 Missouri running back Cody Schrader is lifted by teammates after he scored a touchdown during the second quarter of Saturday night’s game against New Mexico State at Faurot Field in Columbia. (Associated Press)

COLUMBIA -- Missouri was in control from the opening kick.

The Tigers scored on their first possession and never trailed on their way to a 45-14 win against the New Mexico State Aggies on a chilly Saturday night at Faurot Field.

Missouri used 11 plays to drive 64 yards and eat up 5:18 of the clock on the opening drive, ending when Brady Cook connected with Luther Burden on a screen to the right. Burden juked past the initial block, then hurdled a defender and a blocker at the goal line to reach the end zone for the first time Saturday. Harrison Mevis hit his first of a six-for-six night on extra points, with a made field goal to add to his performance, to give the Tigers the lead they would not give up with 6:14 left in the first quarter.

“We played one of our cleanest games, one of our best games of the year,” Missouri coach Eli Drinkwitz said.

Burden had one catch and a rush to start his day of 47 all-purpose yards and two receiving touchdowns on six touches.

Cook jump started his 19-of-27 performance passing for 251 yards and three touchdowns to complement a 7-for-71 day on the ground to lead the Tiger rushing attack.

“I think he’s played his best two games two weeks in a row,” Drinkwitz said. “He continues to get better and he made some great decisions on third down.”

The Tigers converted on four third downs on the drive, which ended when Cody Schrader celebrated his Senior Night and ran in a dive from the 1 for his sixth rushing touchdown of the season with 12:02 left in the second quarter.

Missouri forced another punt to start its ensuing drive at its own 34, then kept the offensive efficiency going with a seven-play, 66-yard drive in 3:39.

This time it was a redshirt freshman in Ryan Hoerstkamp ending the drive with his first career catch for a 32-yard touchdown.

Missouri’s defense forced another punt on New Mexico State’s final drive of the first half, only allowing the Aggie’s into Tiger territory once before the intermission.

The Tigers continued to score after receiving the kickoff to start the second half.

Missouri drove 69 yards on nine plays to take 4:13 off the clock, ending when Schrader made his way into the end zone again, this time from the 5 to put the Tigers up 28-0 with 10:42 left in the third quarter.

The Aggies got on the board for the first time with 4:29 left in the third when Star Thomas ran the ball in from the 10 and Ethan Albertson hit his first extra point to cut the lead to 28-7.

Missouri responded with a seven-play, 70-yard drive, ending when Cook connected with Burden on a shovel pass jet sweep for a 14-yard touchdown.

Burden weaved his way upfield and was untouched for his second touchdown.

The Tigers’ Daylan Carnell ended the Aggies’ next drive with a 40-yard pick-6. Carnell jumped a stop route on the right side and went untouched into the end zone down the home sideline.

“We’ve seen that play all week in practice,” Carnell said.

Missouri got another interception, this time from Jalani Williams, to end New Mexico State’s ensuing drive.

The Aggies got a short field after a fumble and put together a five-play, 44-yard drive for the final score of the game with 2:18 left.

“He’s been a really unselfish player for us,” Drinkwitz said. “He watches other guys go out and get a lot plays designed for them. He just kind of shows up and makes big catches on third down. He does a lot of things right.”

Sam Horn and Jack Abraham both took snaps in the fourth quarter for the Tigers on the 22-degree night.

Missouri (5-6, 2-5 SEC) will try to become bowl eligible when it finishes the regular season Friday against Arkansas in the Battle Line Rivalry game.