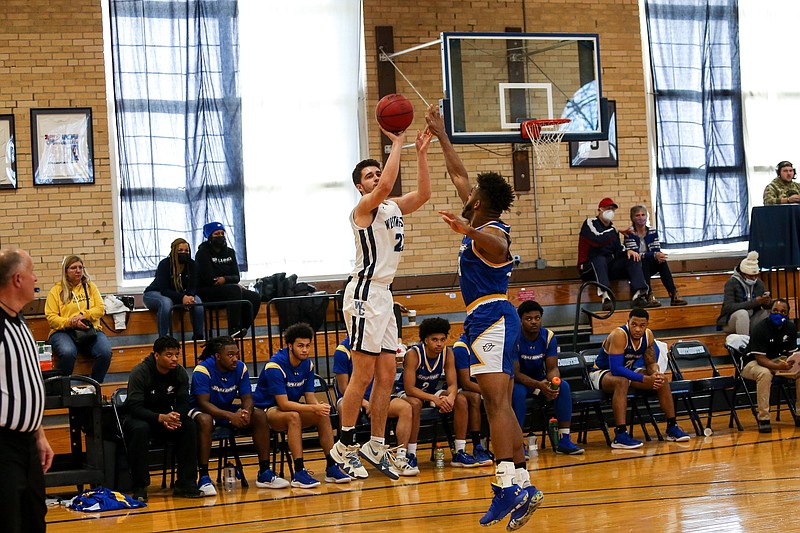 Westminster College men's basketball traveled to St. Louis for the weekend to take part in the 2022 Webster Classic. They faced DePauw on Friday night still looking to pick up their first win of the season. The Jays had a 30-29 lead at halftime after Jaxon Althaus hit a jump shot as time expired. The Tigers took the lead early in the second half and go on to win to a final score of 73-63.

Westminster got out to a 6-0 lead, and that turned to a 9-2 lead, forcing a timeout by DePauw. After the timeout, the Tigers went on a seven-point run to tie the game 9-9. The game was tight for the remainder of the half with the lead trading back and forth or tied. The Blue Jays ended the half on a 5-point run to take a 30-29 lead at halftime.

DePauw wasted little time taking the lead, hitting back-to-back 3-pointers to take the lead 39-35. They extended that to a 10-point lead with 13:52 left in the game. The Jays went on a 9-2 run to pull within three points at 49-46 with around 10 minutes left to play.

The Lions responded with a run of their own and took an 11-point lead with five minutes left to play. They held the Blue Jays at arm's length for the rest of the game and won 73-63.

The Blue Jays were led by Althaus who had 25 points, 11 rebounds, three blocks, two steals and two assists in the game. The big man, Ben Eberlin went 6-9 from the field and scored 12 points.

Westminster will be back in action at 1 p.m. today when they take on Central College in the Webster Classic in St. Louis.