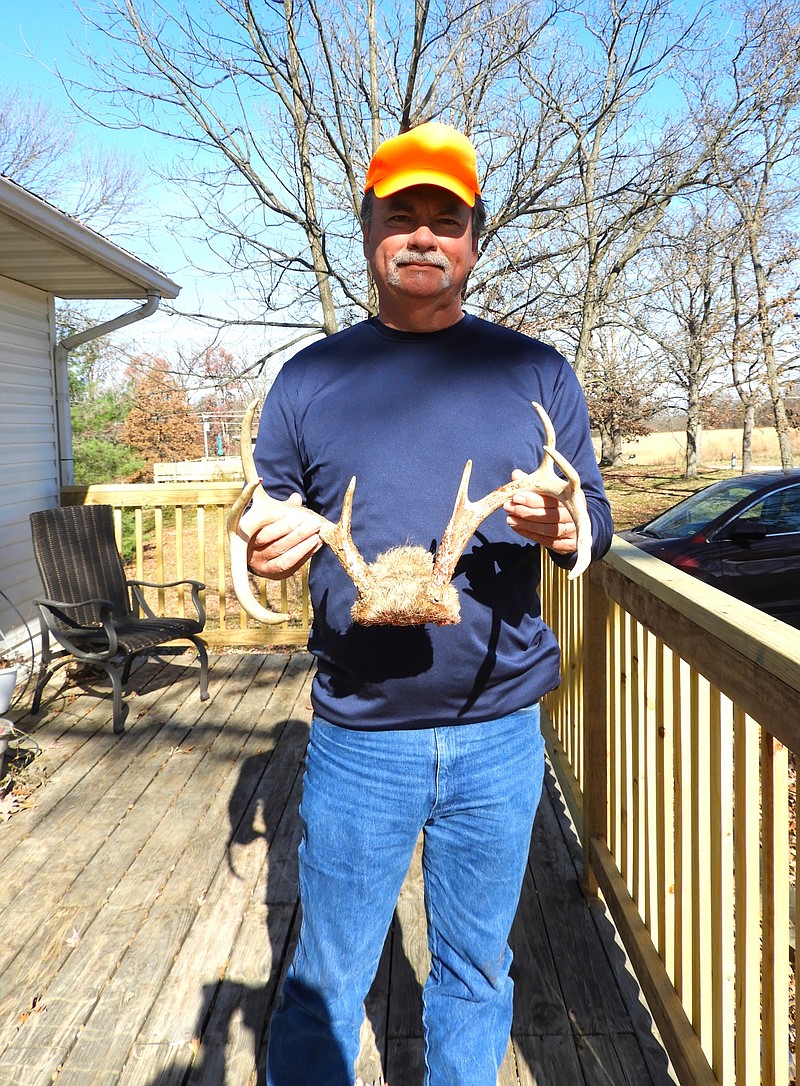 Submitted photo: Daniel Kleindienst holds a set of antlers of a deer he previously hunted.

My husband, David, and our sons had always been hunters. With both rifles or bow and arrow, they always brought home their game.

These days it's mostly our middle son, Randy, that's the hunter. David can't hunt because of his health, and Daniel now lives in Tennessee and spends his time in the music business. Eric doesn't hunt game -- he is an artifact hunter whenever he gets time.

This year Daniel decided to drive up for the weekend and go hunting with his brother. Mostly for old times' sake, I think. Here it's been like 84 degrees, then, like it usually does, the day before deer season opened, it dropped sharply and fast! So it was around 24 degrees to go hunting.

I smile as I recall our hunting experiences nearly 60 years ago. Some of you reading this may not realize that "deer fever" isn't just a disease that strikes men.

I'm thinking of when our two oldest sons were both babies, a year apart. Oh, where did the years go, and so fast? And what would make a normally sensible woman set her alarm for 3 a.m., get up, get two small children dressed, then help husband load up the old pickup with guns, camera, flashlights, thermos bottles of coffee, children's supplies, and children, to start off in the dark in the cold temperatures below the freezing mark? Let's go back to that time for a few minutes.

Our first stop would be Aunt Abbie's home. She lived in the Reform, Missouri, area. We could always count on Aunt Abbie for anything. We left two little sleepy heads wondering what was happening, and where mama was going. I was a stay-at-home mom, so they weren't used to this. I fought back tears for a moment, but reasoned out that deer season only happened once a year.

Still dark outside, we headed our truck toward our hunting territory, which was almost an hour's drive away. It would be close to sunrise when we arrived. There seemed to be a freezing mist coming down. Slick roads frighten me, but I tried to focus on the deer I would be taking home.

Finally, we arrived at our destination. After the ride in our warm truck, the weather seemed to have turned from just cold to bitterly cold. It was still dark, and I was glad about that. I wanted to be on my location before daybreak.

Funny, any other time I would be nervous about going out in the dark, and certainly I would not be eagerly taking off down in a deep hollow in the woods. Perhaps it was the 30/30 Savage deer rifle on my shoulder that gave me confidence. It sure was dark -- I mean really dark!! I searched the sky for some light. Any kind of light would do, stars, anything!

After finding a good, big tree to set against, I brushed away all leaves and noise-making debris and got ready.

The stars that I finally could see were beginning to fade away and the sky was lightening up. I was cold but wide-eyed and excited. I'd waited all year for this morning. As the sun rose, a cold wind began to blow and it cut right through my layered clothes.

I began to hear a soft sound all around me. It was sleeting! Boy, was I cold! I looked up trying to see and feel some sun somewhere. My fingernails felt like they are popping off. My face was numb and I was beginning to chill and shake. But occasionally, I heard a noise and for a few minutes I forgot that I was freezing. Could it be a deer? No, only a squirrel and this made me feel colder than ever!

I finally reached the point I didn't even know if I could raise my gun and my eyelashes had ice on them. I wished David would come by on his way to the truck, but I wasn't going to give up first. I had brought my own hunting knife, insisting I wanted to field dress my own deer.

Far away I thought I had heard a shot, but I was too concerned about freezing to think much about it.

"Hey, ready to cut up a deer?" I looked up and there stood David with his face all warm from dragging his deer.

"Yeah," I said, pretending I hated to leave, but I actually wondered if I could stand or even pick up my gun.

While my David checked in his deer at the check station, another hunter was just leaving.

"Lady, could you use some deer," he asked. He said he really loved hunting, but his family wouldn't eat it.

That night, as David and I packaged our two deer's and enjoyed the smell of fresh deer tenderloin frying in the skillet, my toes were still tingling and thawing out.

"You know what?" I said. "I think I have discovered an easier way to get my deer."

David smiled and said, "It sounds like your deer fever has broken, at least for this year."

On a funny note, David and I haven't deer hunted for years, our son Randy gives us deer meat. Strange thing, though, he claims none of his deer ever have any tenderloin, hmm.

We went out Sunday to our son Randy and Christine's home to see the deer Daniel had gotten that morning. He would have waited for a bigger buck, but you know how it is -- Nashville was calling. Had to get back to work.

One more thing I should tell you. Daniel left and just before he got to the Tennessee state line, he had a major blowout! Although he had good tires, for some reason the back tire blew all the way off the rim! He spent four hours along the side of the interstate waiting for his insurance rescue to get there "in a few minutes." We were worried sick, but kept in communication with him by texting. We were so thankful when he got back on the road.

We enjoyed being there with them, kidding and listening to their stories. David said it was like good medicine for the heart. Our oldest grandson Kirt came and brought his boys with baby Kolby being our youngest great grandson.

Listening to them talk brought back so many memories of when David and I used to deer hunt, and the many fun stories and successful hunts we have behind us.