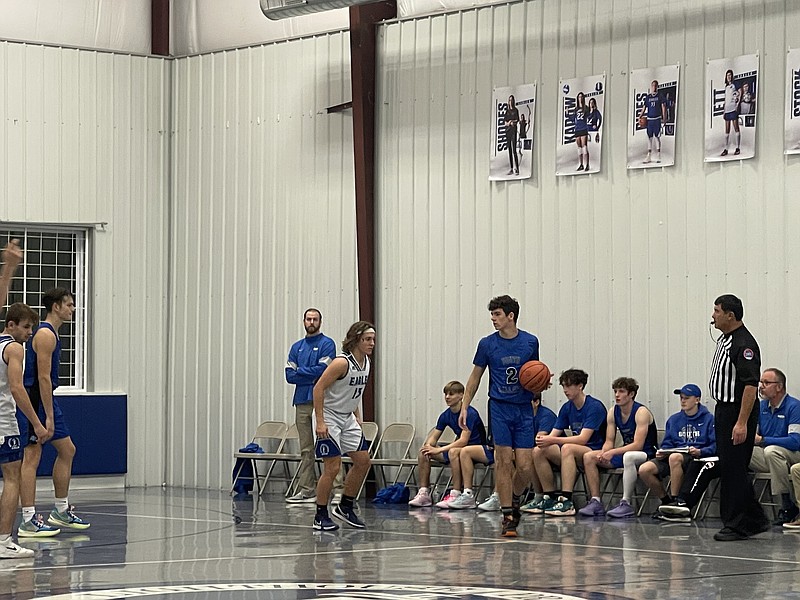 On Friday night, South Callaway boys basketball opened the season with a nonconference matchup at Lighthouse Prep in Jefferson City; it was the first-ever meeting between the two teams.

The Bulldogs dominated both sides of the court and beat the Eagles comfortably, 86-38.

One Bulldog who led the way in the transition offense was Ryan Leeper, who notched 15 points, six steals and a rebound.

Leeper's performance in the first half set the tone for South Callaway's total team victory. The junior scored 11 points and recorded five steals through the first 16 minutes; two of Leepeer's steals led to him scoring layups in transition.

"Ryan's one of the guys who started for us last year," South Callaway coach Seth Thomas said. "He got some playing time as a freshman and played a lot last year as a sophomore starting. He's a kid that can play a lot of different positions, and he can impact a basketball game in a lot of different ways. And he kind of made his impact really big on the game right there on the start of it. And he can score it, can rebound it, he can handle it, he can do a lot of good things for us and I have a feeling he's gonna be doing things like that on a nightly basis; that kind of stuff on the stat sheet."

After the first half, South Callaway was up 52-16, which allowed Thomas to give some rotation players minutes. Two different Bulldogs provided a spark in the second half -- Colten Crocker and Dane Daugherty.

During the middle of the third quarter, Crocker provided a jolt of offense off the bench, sinking two 3-pointers in roughly a minute.

Crocker scored his first 3-pointer after Tucker Jones picked up an offensive rebound and passed the ball to him. Crocker attempted a shot from the right side of the arc, and the ball spun around the rim before it finally sunk.

The Bulldogs' Kayden Rogers collected a rebound, and Crocker scored his final 3-pointer. In transition, Crocker cooly drained the shot from the top of the arc. His second score from deep led Lighthouse Prep to call a timeout after South Callaway went on an 8-0 run in the latter part of the third quarter.

"I think we're really deep, and our guys on the bench kind of give us an extra punch," Thomas said. "Colton is a sophomore; it's his first varsity game. He's gonna have a bright basketball future. It's just good to see some positive things go in and go down. He does a great job around the point guard spot, backing up Tayber Gray. And he was wide open, made a great decision, knocked down two big shots."

In the final eight minutes, Daugherty was the Bulldog knocking down some big shots. The junior made three 3-pointers, with one coming in transition.

The left corner was Daugherty's sweet spot, as he made all his 3-pointers from the location.

"Dane is a great shooter," Thomas said. "That's where he does really great, and his most elite skill set as a basketball player. Probably does the best job on our team running split into the corner in transition. And he's a great shooter, and our guards and our other guys go to find him if he's wide open. He's got a little bit of space; he's gonna knock it down. He did get hot quick, and I think you're gonna see a lot of games like that out of him. And he's worked really hard to get this spot in as a junior, and starting for us tonight; It was great to see him right there have some success."

The Bulldogs didn't just have success getting buckets; they also did collecting boards and steals. South Callaway totaled 20 rebounds and nine steals in the resounding victory.

"I thought we did a good job defensively," Thomas said. "We can be a lot better. We kind of talked a little bit about that. We do a good job on the ball. We got to clean up some things off the ball -- that's what we're gonna do. I would have liked to even do a little bit better job rebounding the ball, but we are capable of being a really great defensive team, and you see it in spurts. You saw it in spurts tonight. We're really athletic, and we have great instincts and passing lanes and taking balls and getting deflections and getting some steals. And that plays right into what we want to do offensively and go run in scoring transition."

"A tough team," Thomas said. "Been in the Final Four a couple times in the last six years. Their coach, Coach (Pat) Connaway, does a great job with them. They always play hard for him. They return a lot of other guys. They have their first game next Monday. We'll kind of get a good look at them. We got to continue to build things we did well tonight. On our count, we dished out 26 assists, which is huge. It's more than we had any point last year and just worry about that. And making sure we're ready for the physicality that Van-Far is going to have for us when we do play them. It'd be a great home opener for us, and I hope the people around Mokane come check it out."